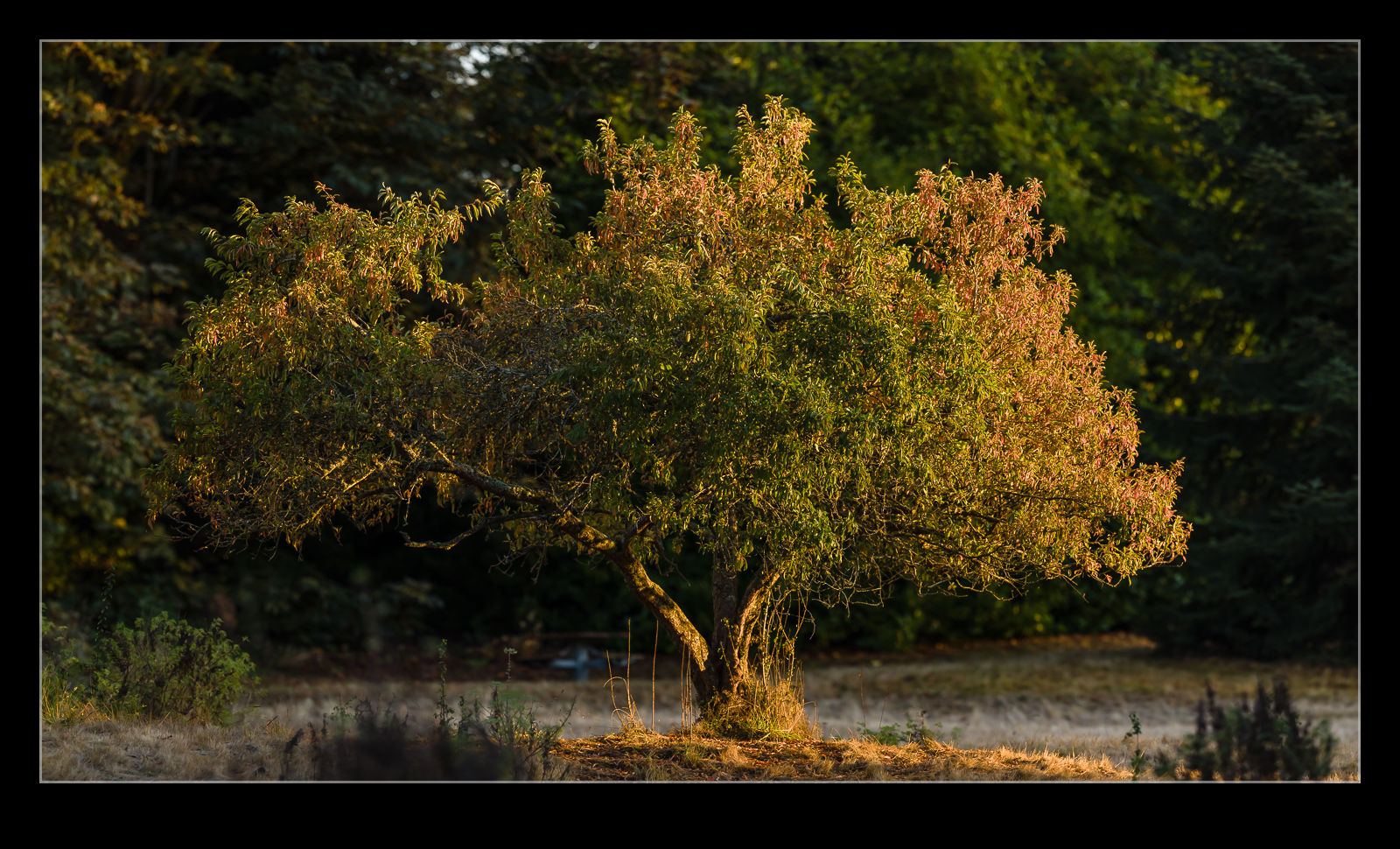 I was walking back to the car in the park when I saw the light on this one tree making it look really attractive in the evening conditions.  I only had the 500mm with me so there was only one option.  Time to shoot a pano and stitch the whole thing together when I got home.  Handholding a pano with the 500mm is not ideal but it seemed to work out okay. 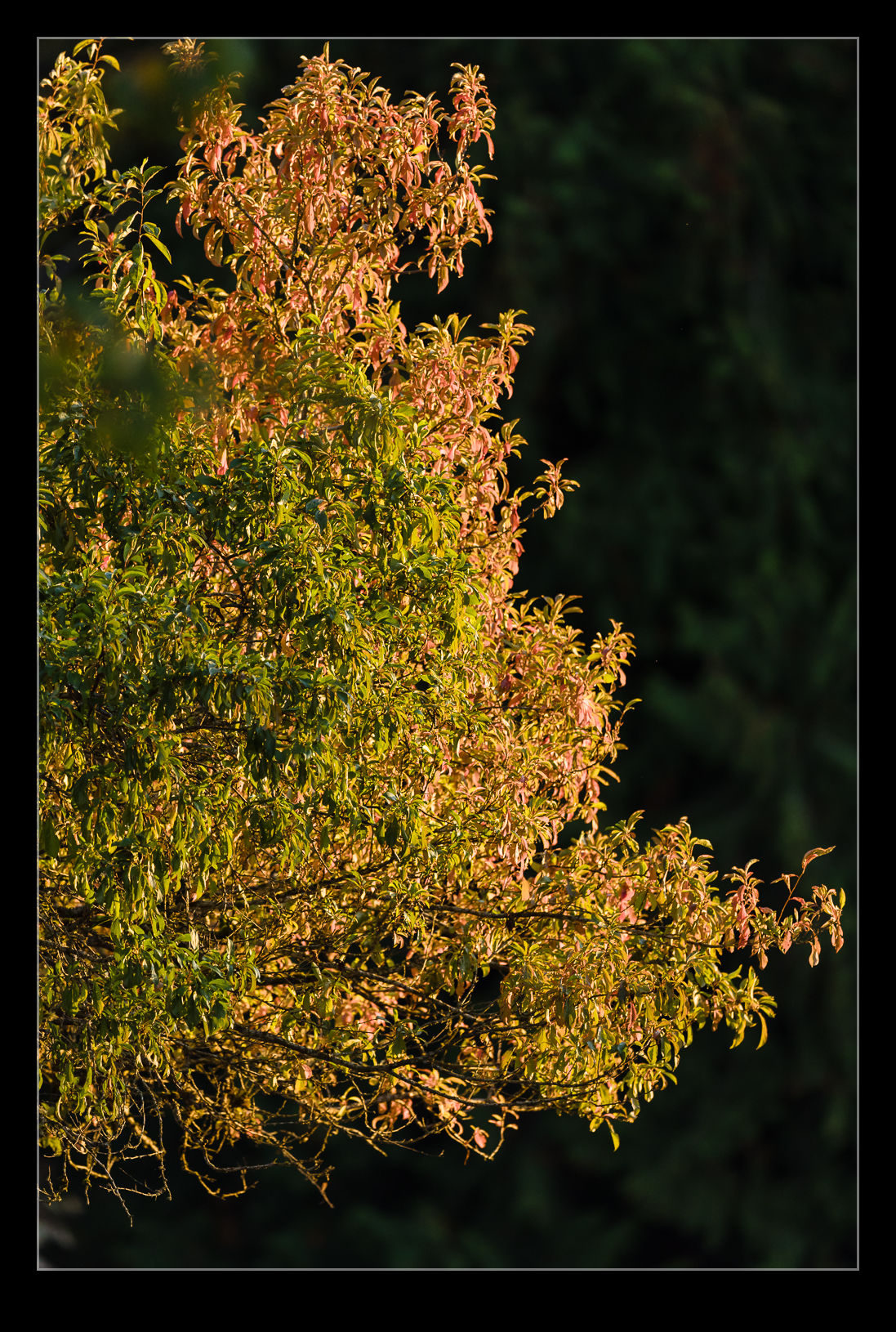 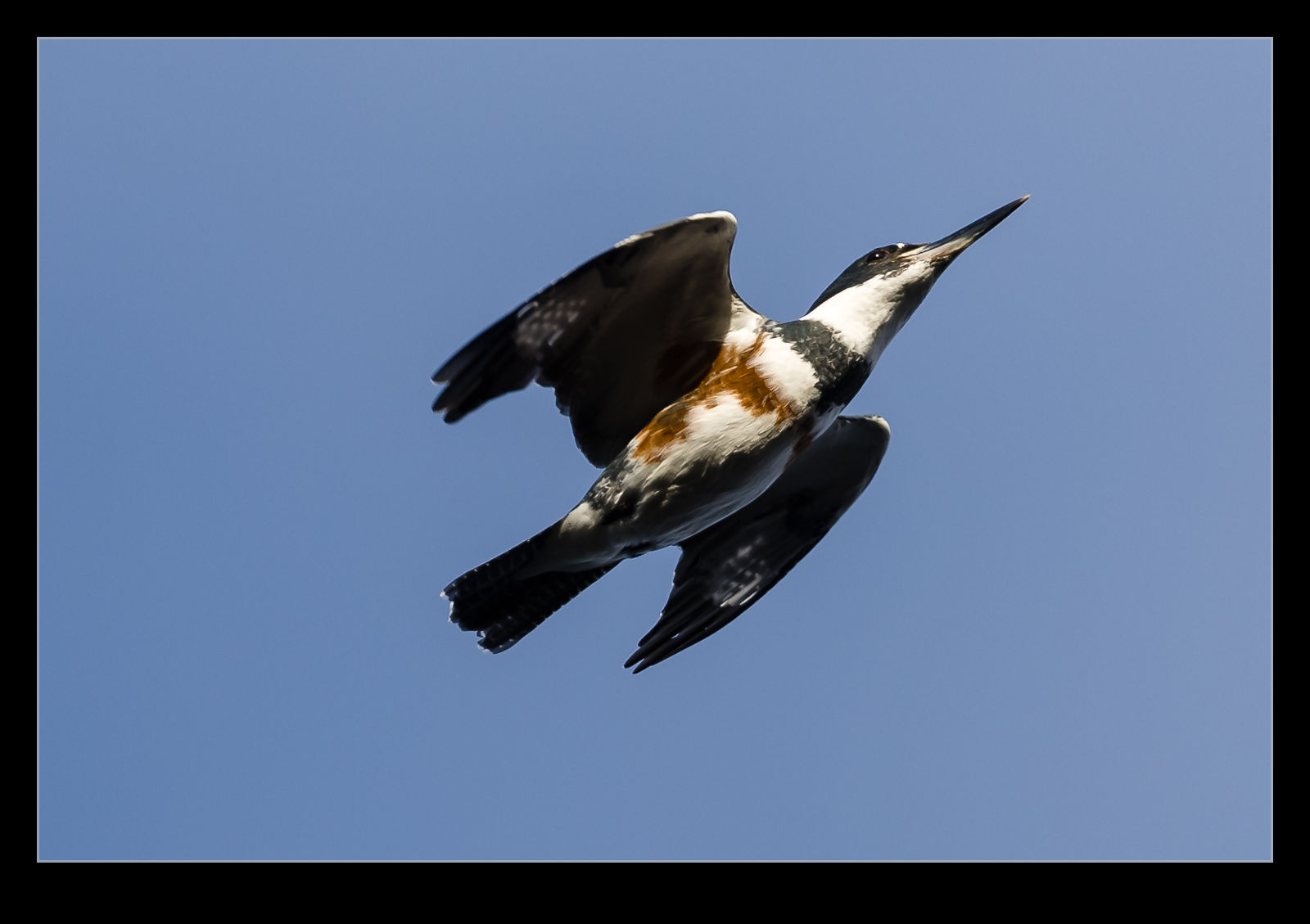 There are some kingfishers that live around Juanita Bay but I have never previously been even remotely close to them.  They seemed to live around the outlet of the creek and head straight out into the bay so they were but a speck from where I was.  However, for some reason, a pair of them were out and about.  When I was on one pier, one flew right past me and I was too slow to realize what it was.  However, luck was on my side. 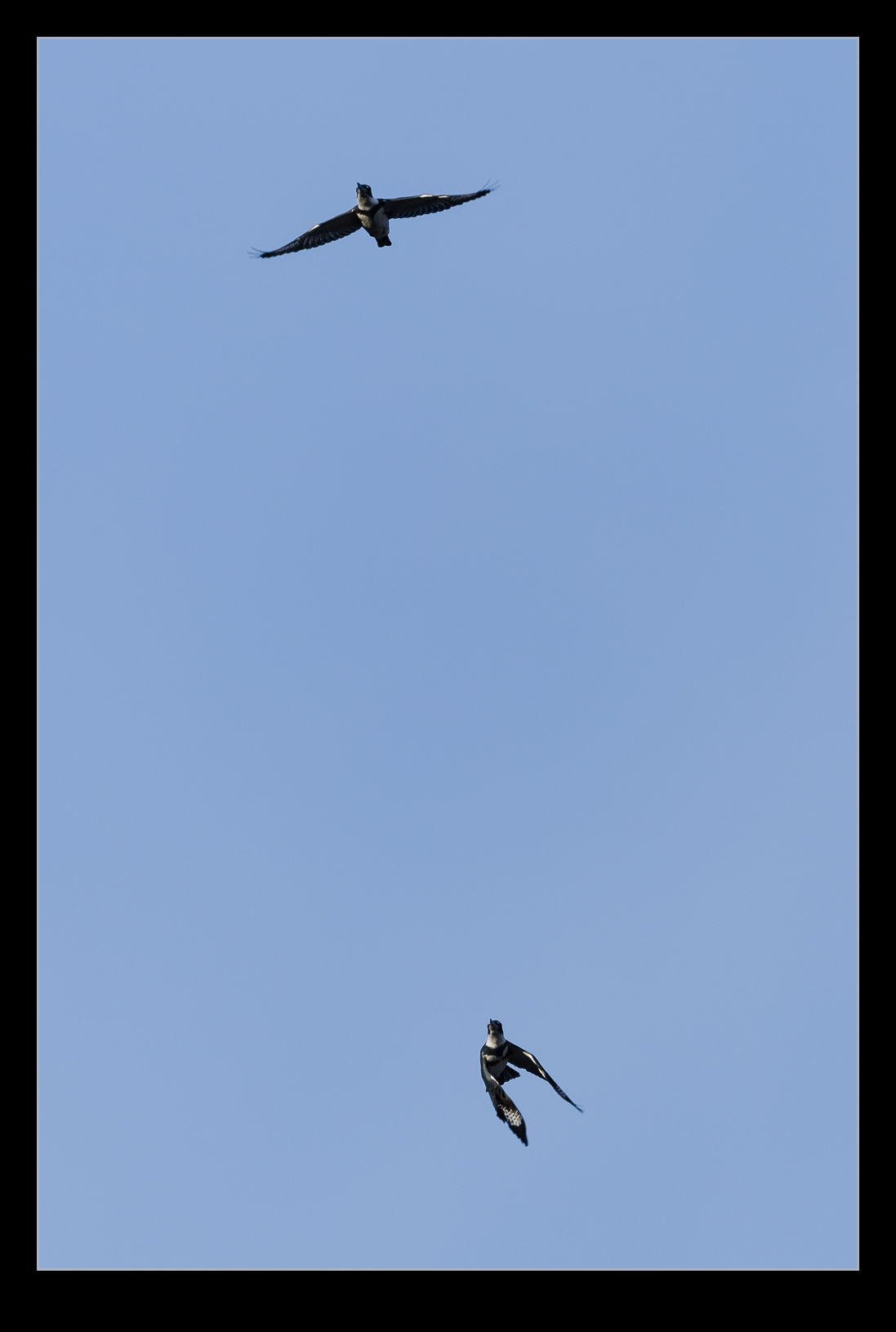 It was heading for another one over the other side of the inlet and they then started spiraling around before heading back towards me and then straight overhead.  I was lucky enough to get a few shots of them as they went by.  I headed around the inlet later on and they were flying again.  This time one landed on the deck where I had previously been.  No doubt, that wouldn’t have happened if anyone had still been there but it was funny to see. 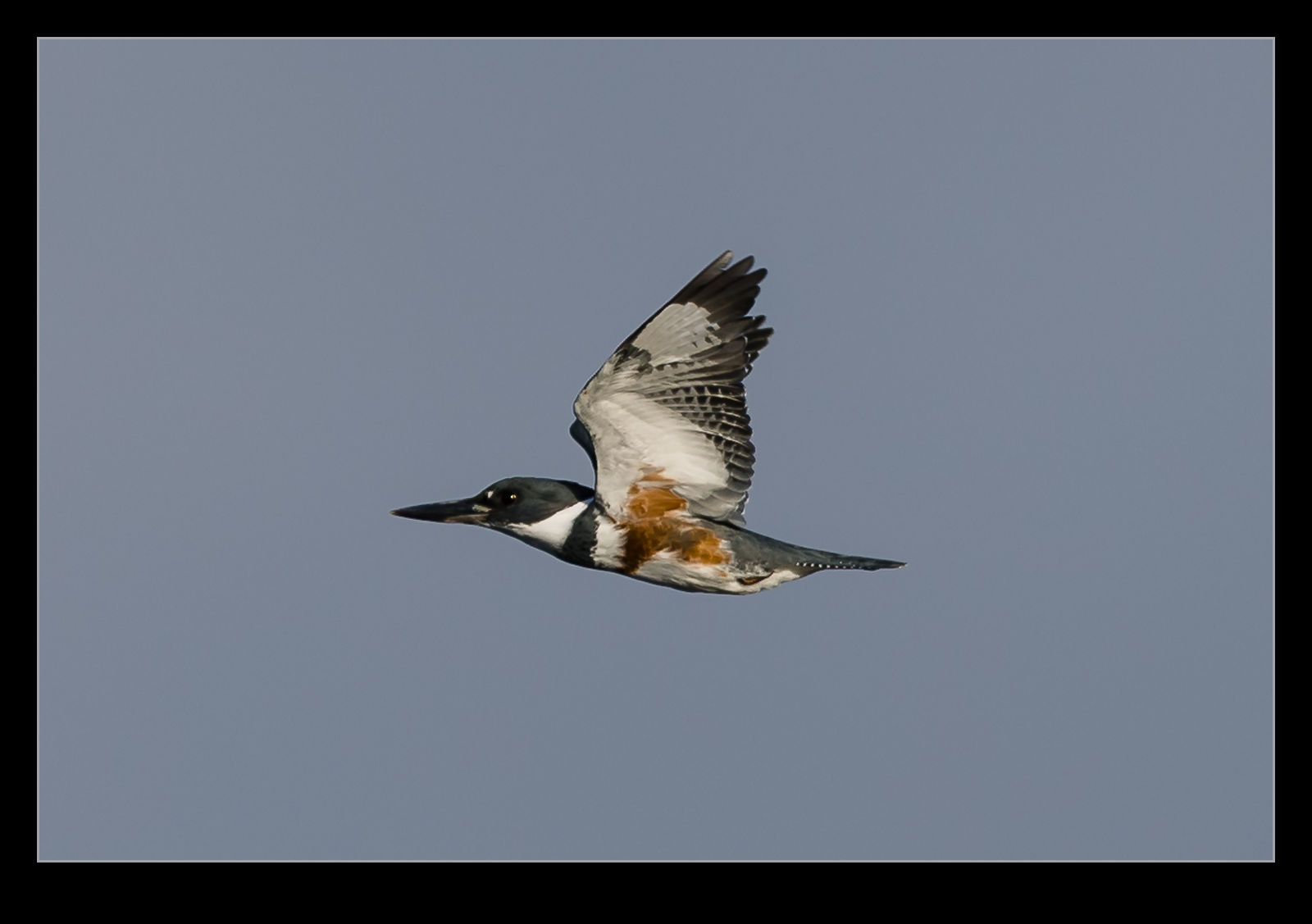 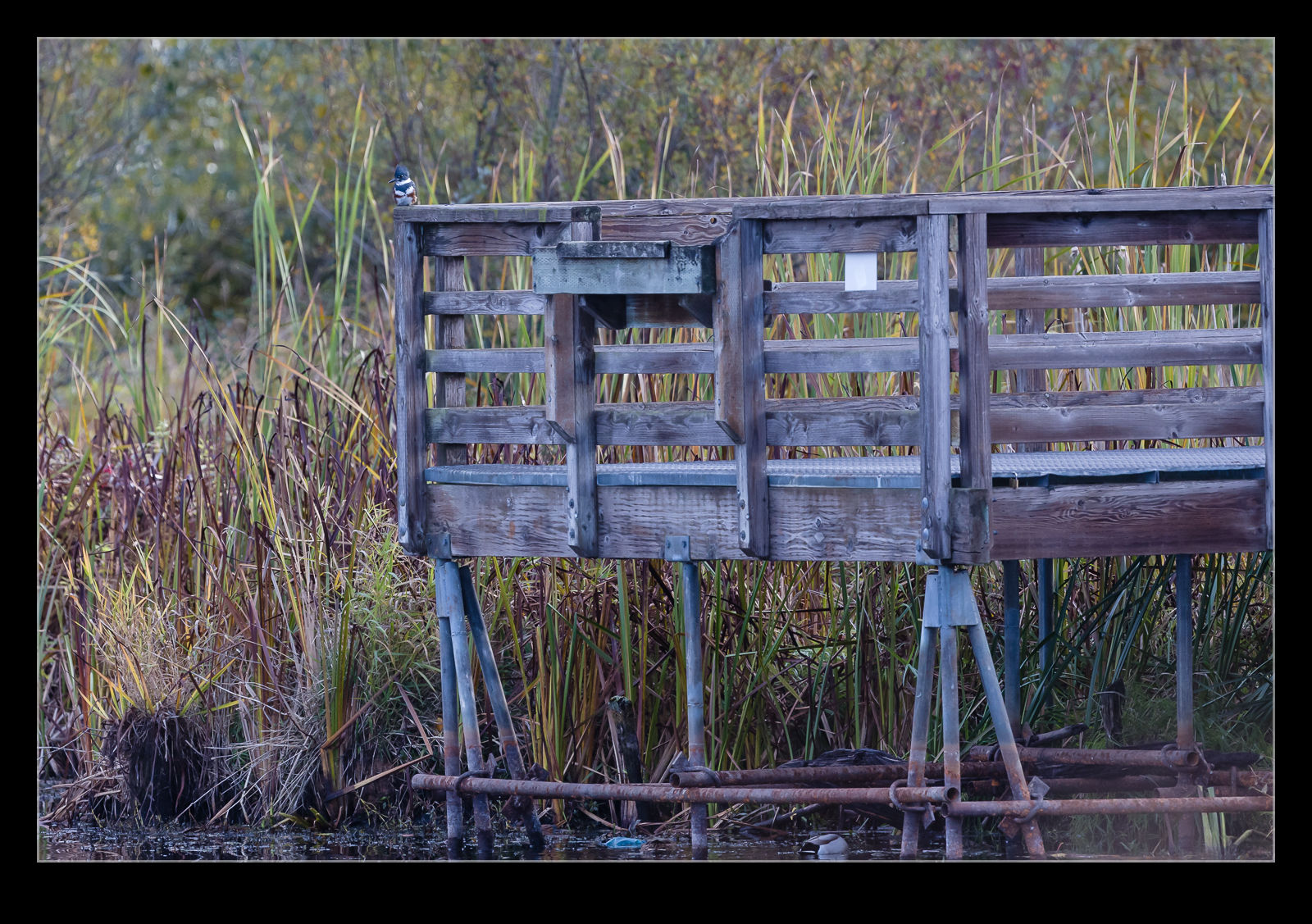 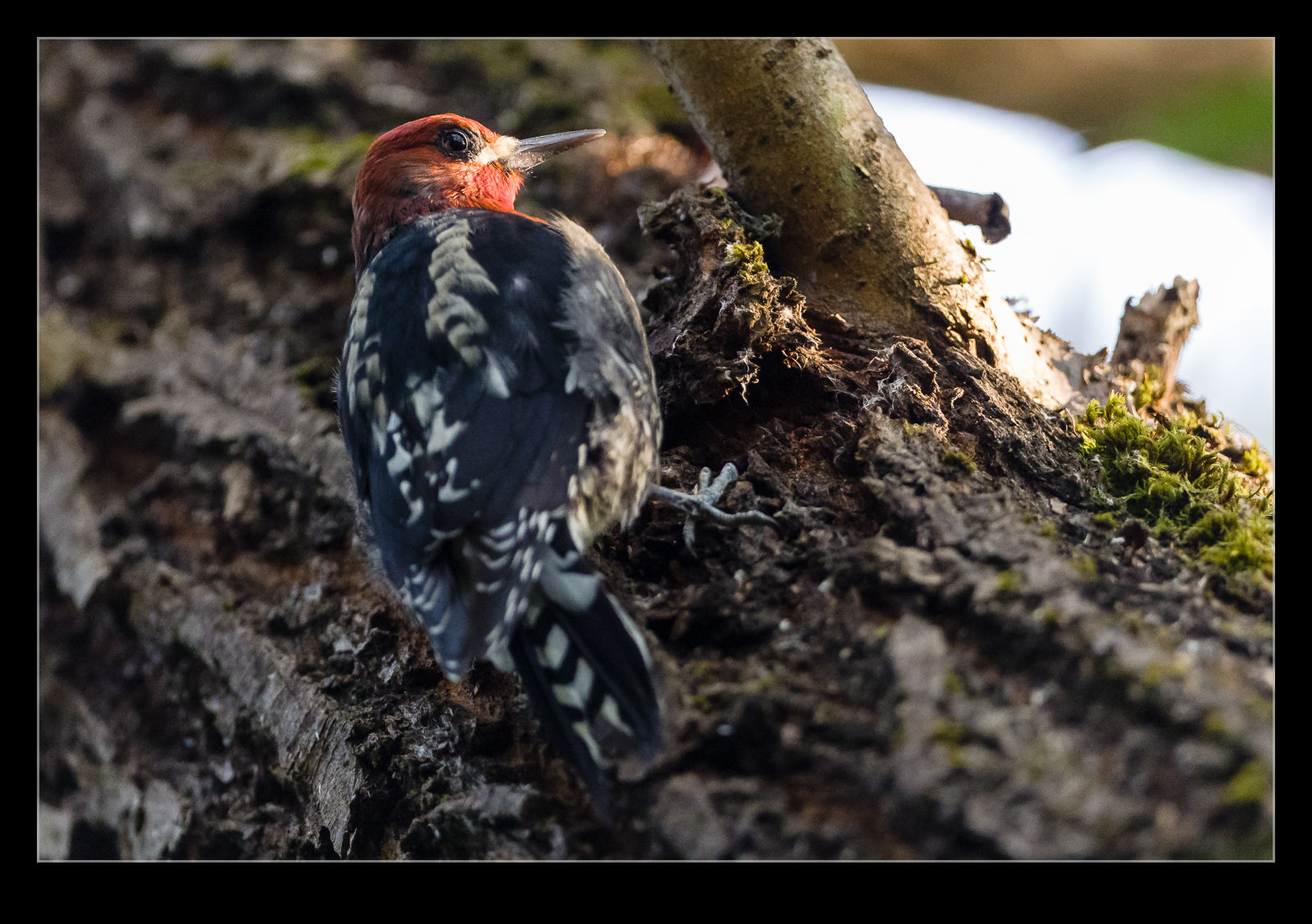 While I am wandering around Juanita Bay park, I meet plenty of people that are very knowledgeable about birds.  I am not so I tend to follow what others are looking at and shooting.  I came across a woman starting up a tree at a bird that she informed me was a sapsucker.  She could have been telling me a tale for all I know.  It was at an awkward angle but I tried to get some shots of it anyway.  When I came back, she was gone but it was still there.  It had moved to a slightly more convenient angle for a photo but not by much.  For you twitchers out there, is this a sapsucker? 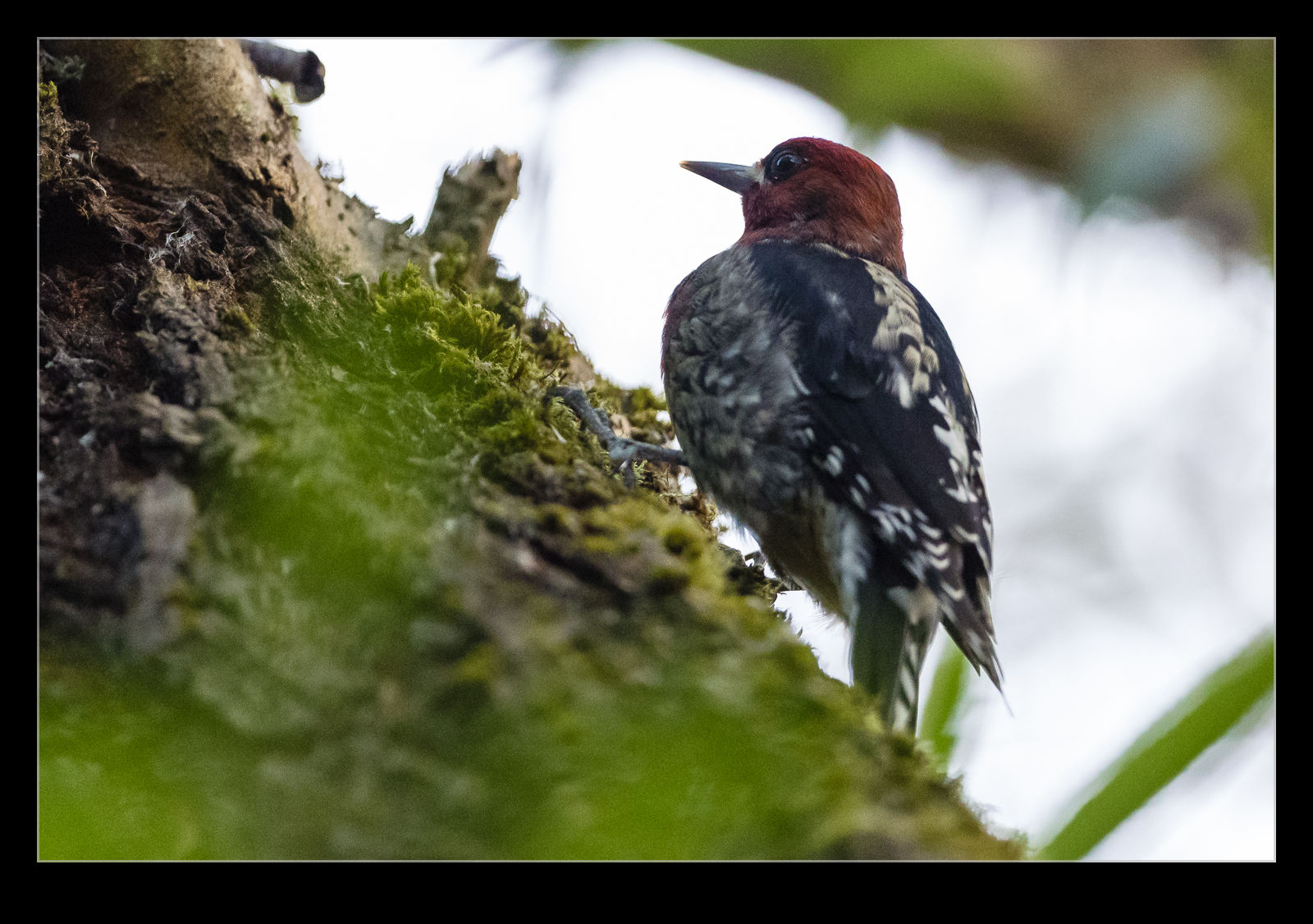 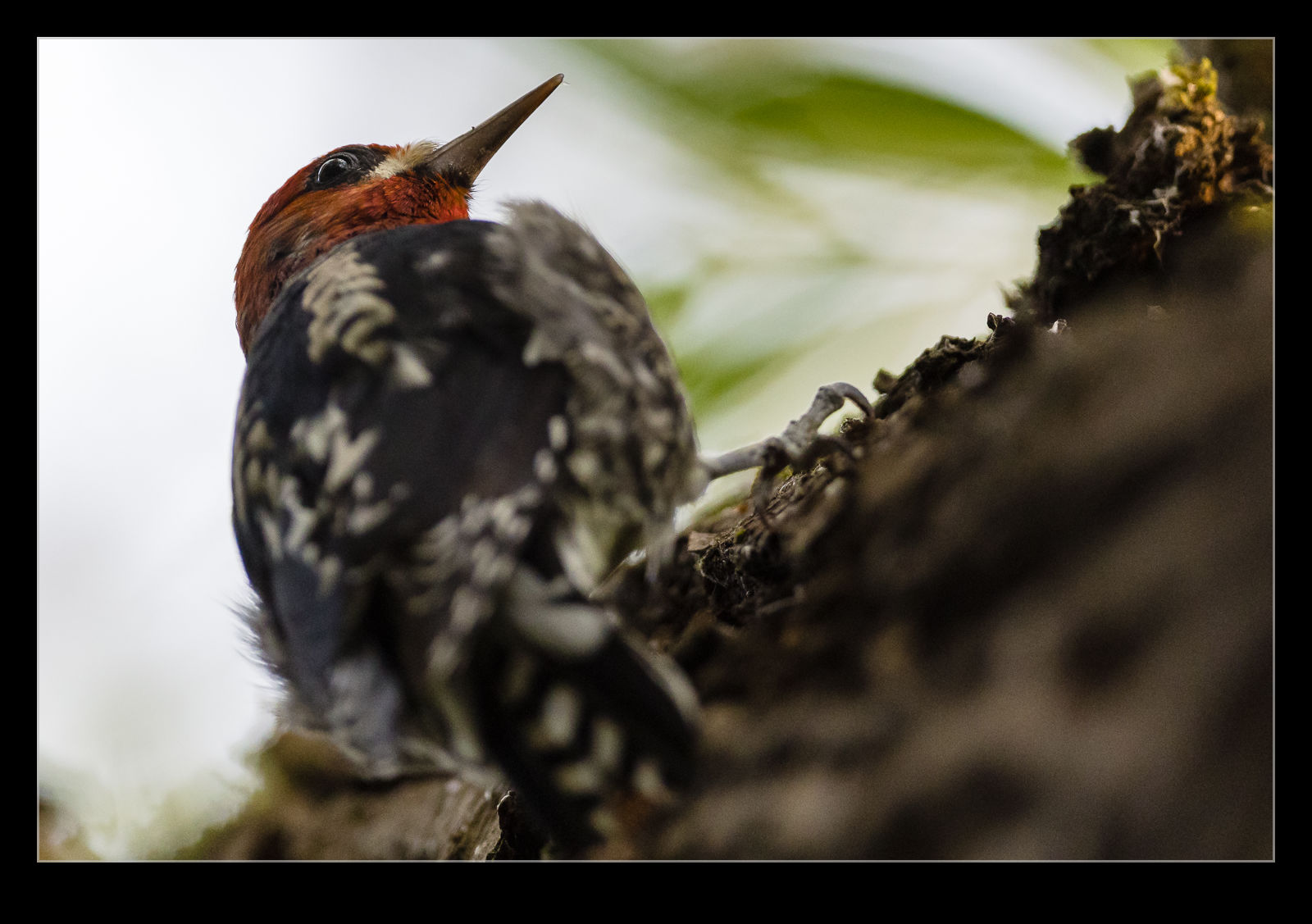 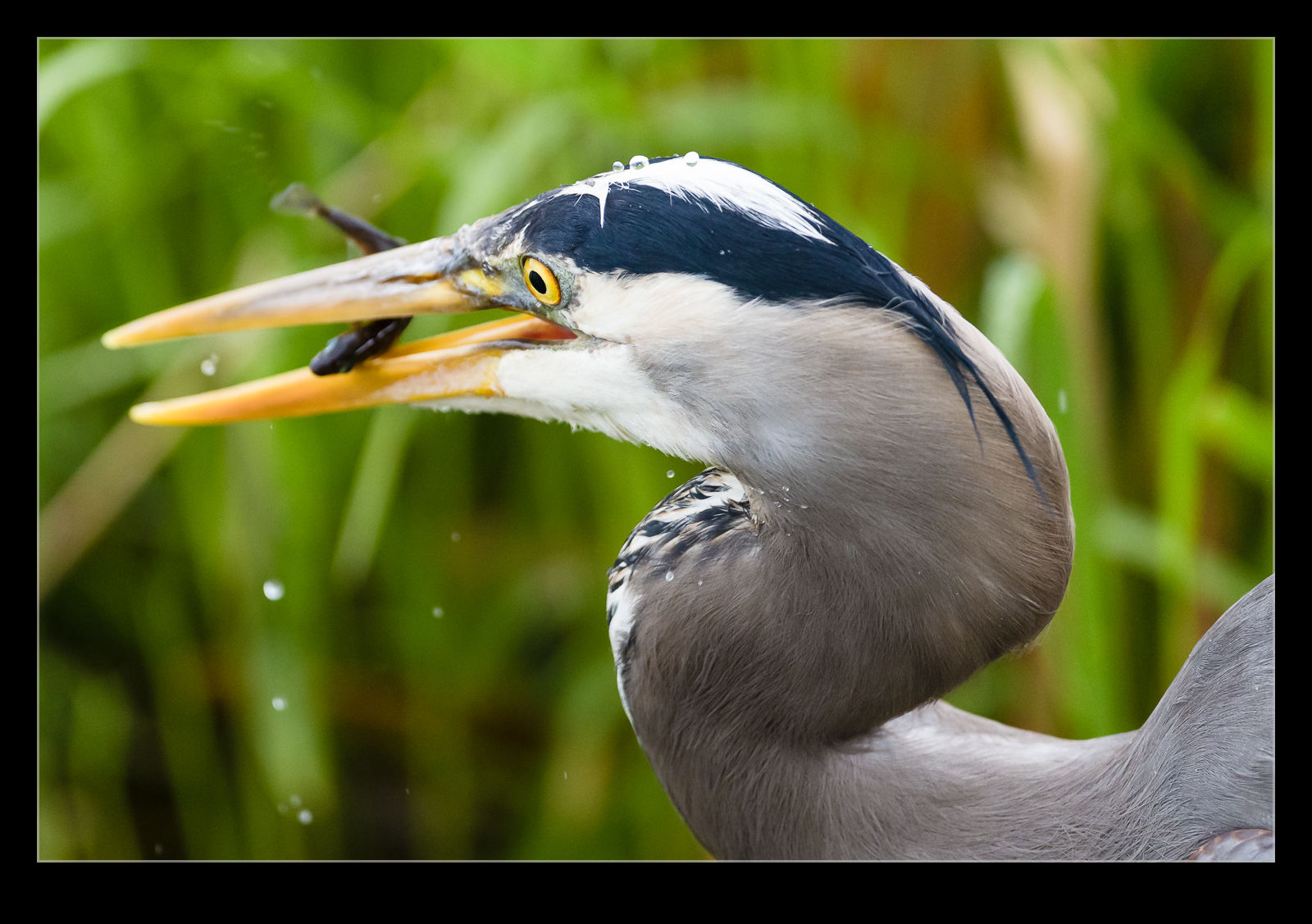 Herons hunting for their food have been on here before.  I have often been trying to get good shots of them making the strike as they go after a fish in the shallows.  The effort to then eat that fish has also been covered here.  Therefore, I am going to be repetitive today.  I happened to be a lot closer than usual to a heron when it was fishing and I got some good close up shots of its head as it swallowed its meal.  Looks like the fish didn’t have much of a chance! 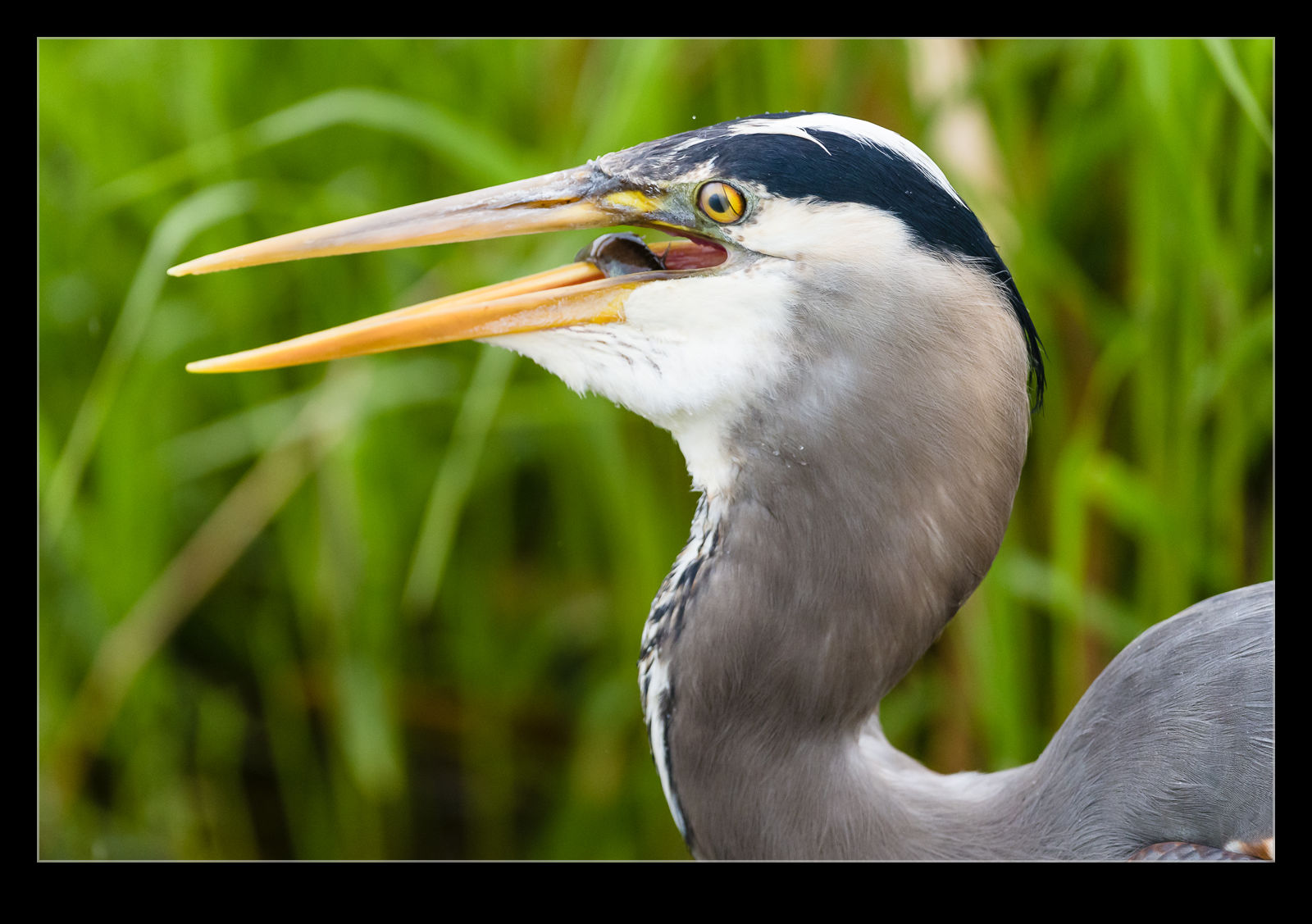 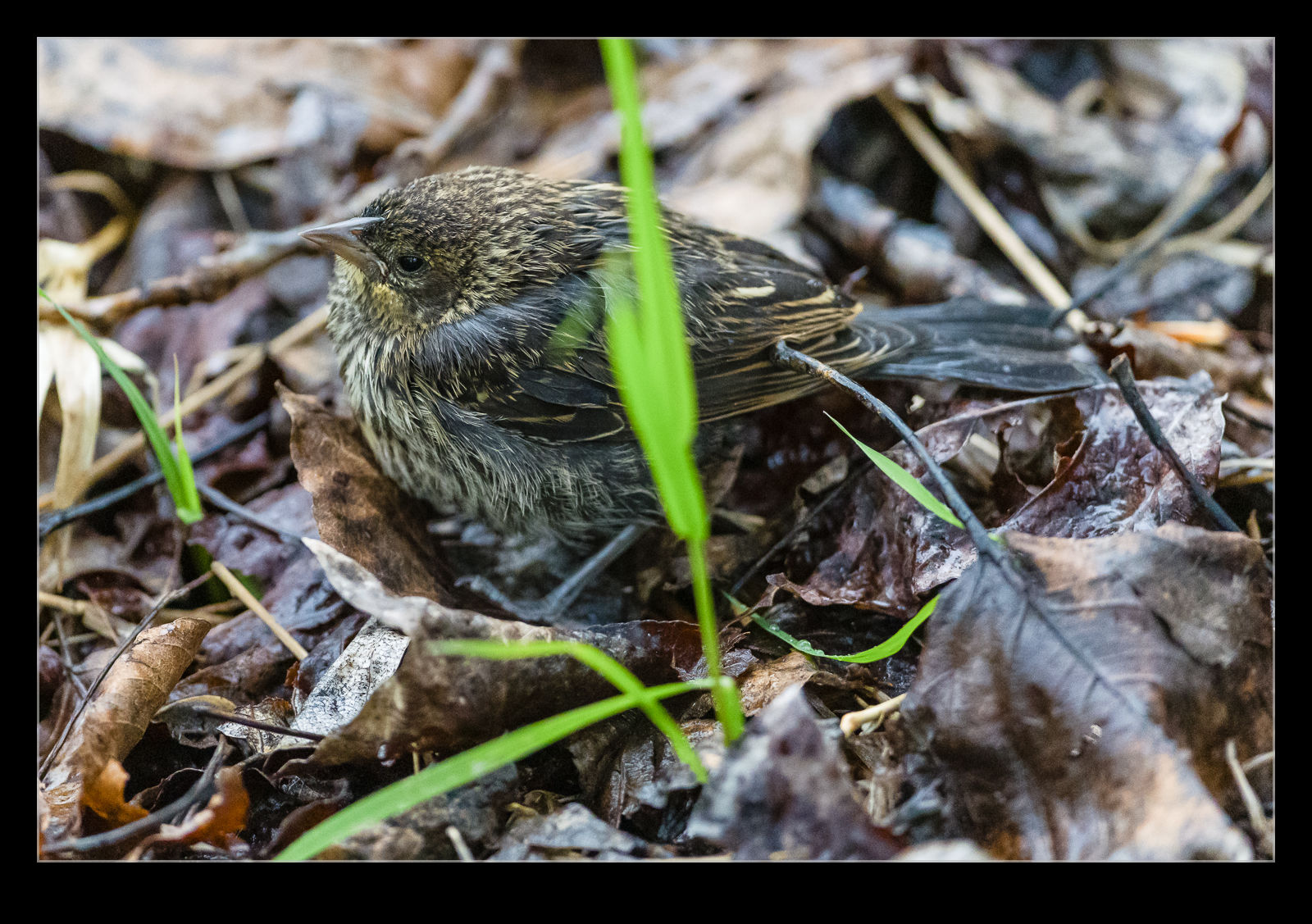 Earlier in the year, I got to see the red winged blackbirds nesting in Juanita Bay Park and then defending their nest from threats real and perceived.  The humans were not causing them any problems but the herons were happy to much on a baby blackbird.  It wasn’t long before these babies had fledged and were out with their parents.  As with many baby birds, they were very demanding regarding food and not interested in getting it themselves.  I came across this parent and child along one of the boardwalks.  The chick looks like it should be able to take care of finding food but instead it just hung around making a ton of noise while the parent was busy trying to find something to keep it quiet! 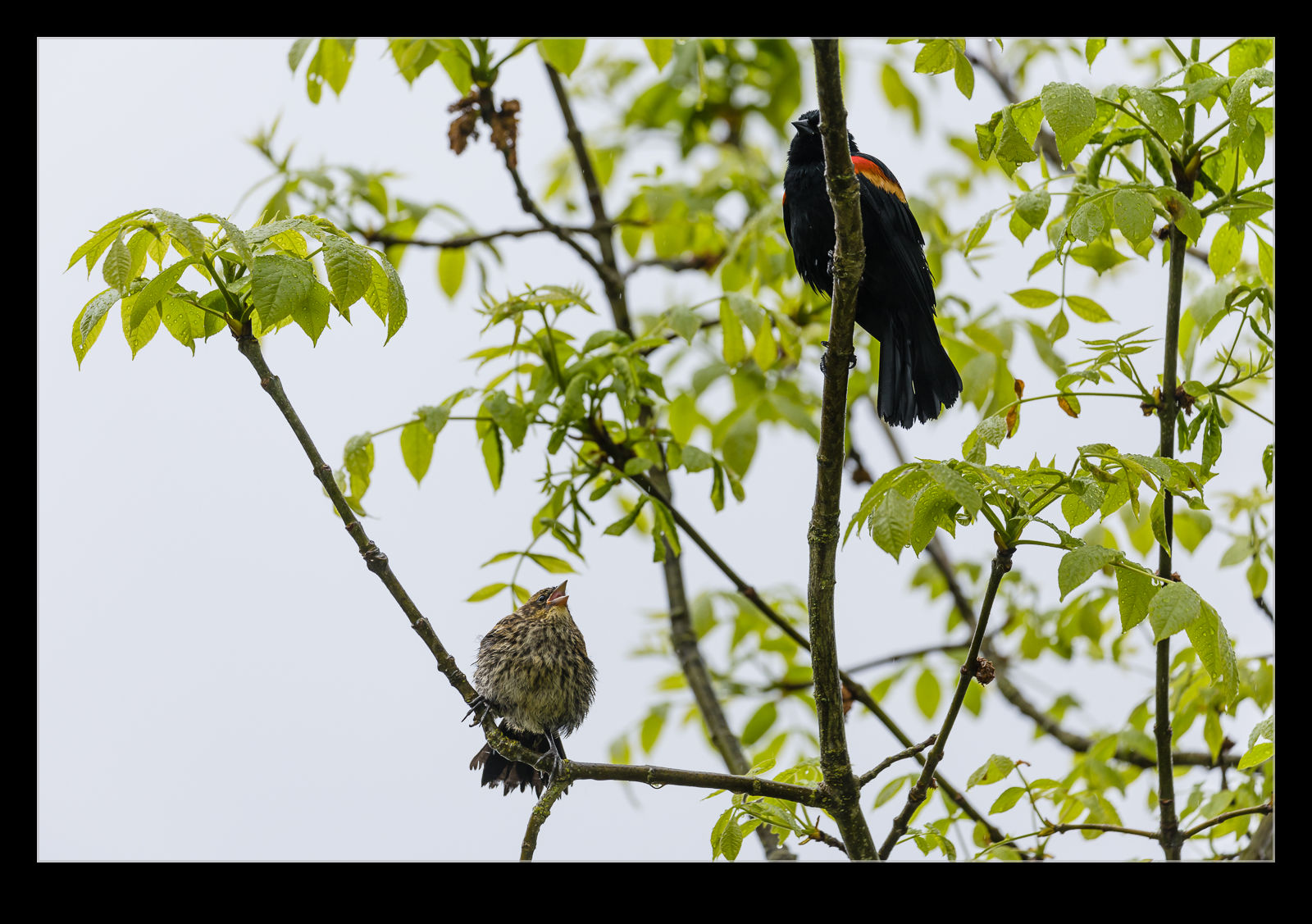 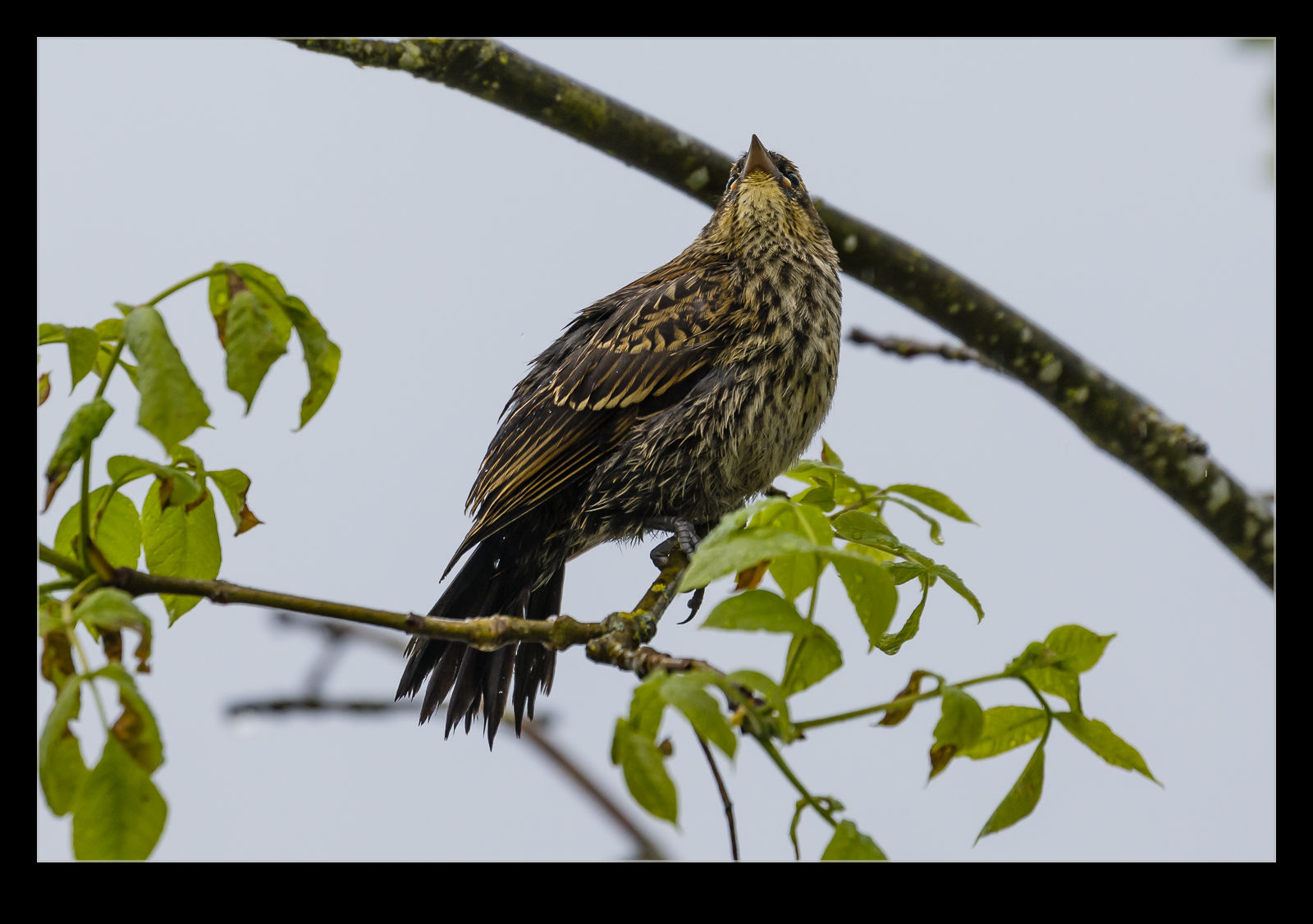 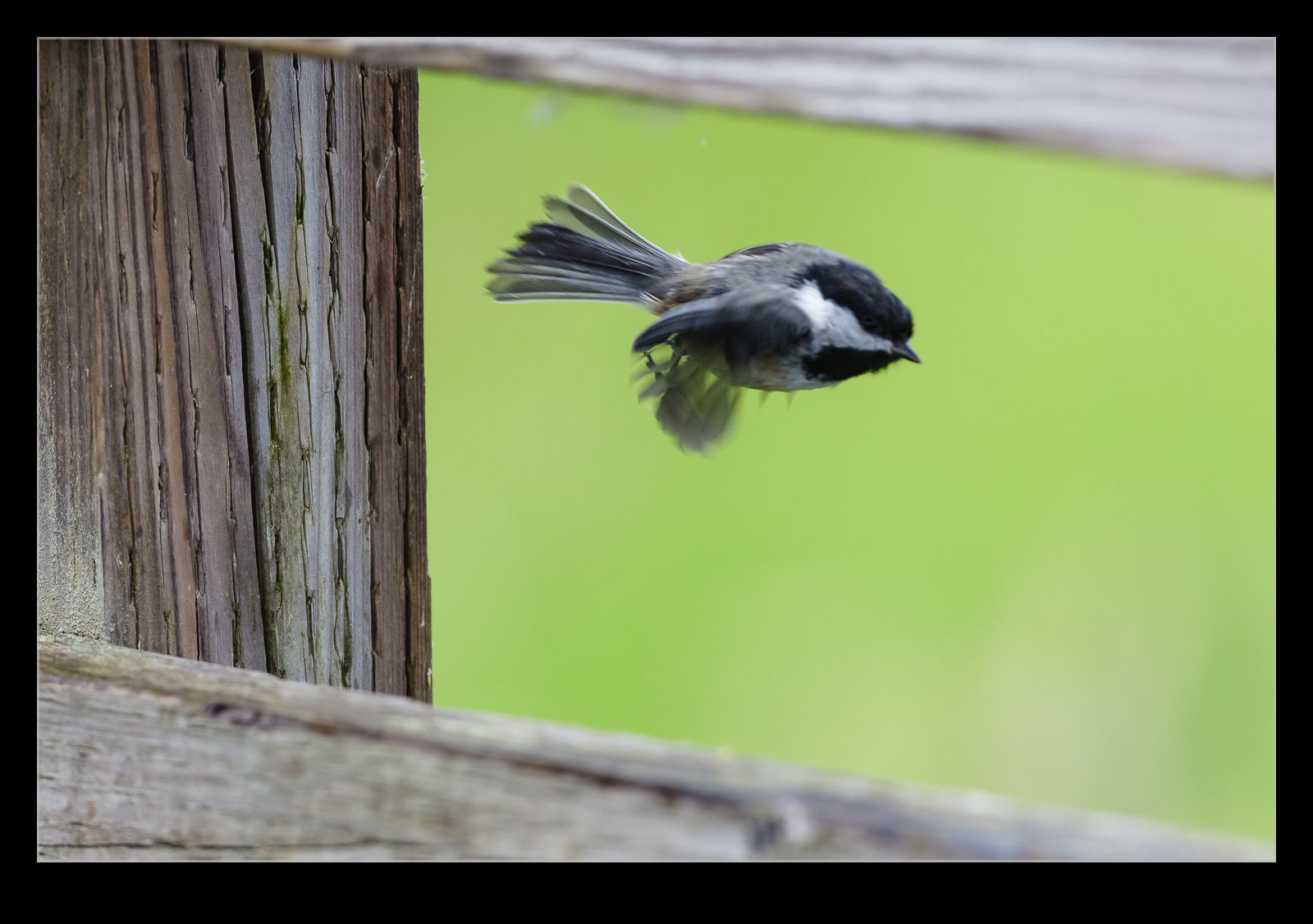 Tracking moving birds can be tricky, particularly if they are small ones that are very agile and move fast.  There was a chickadee perched on the railings of one of the platforms in Juanita Bay Park and I got a few shots of it as it hopped along the wood.  A couple of times it launched into the air as I was tracking it.  The shots are not that sharp as I was not prepared for it to move and it was quick but I found the look it is – as if it was jumping up – to be rather interesting.  A cute looking bird. 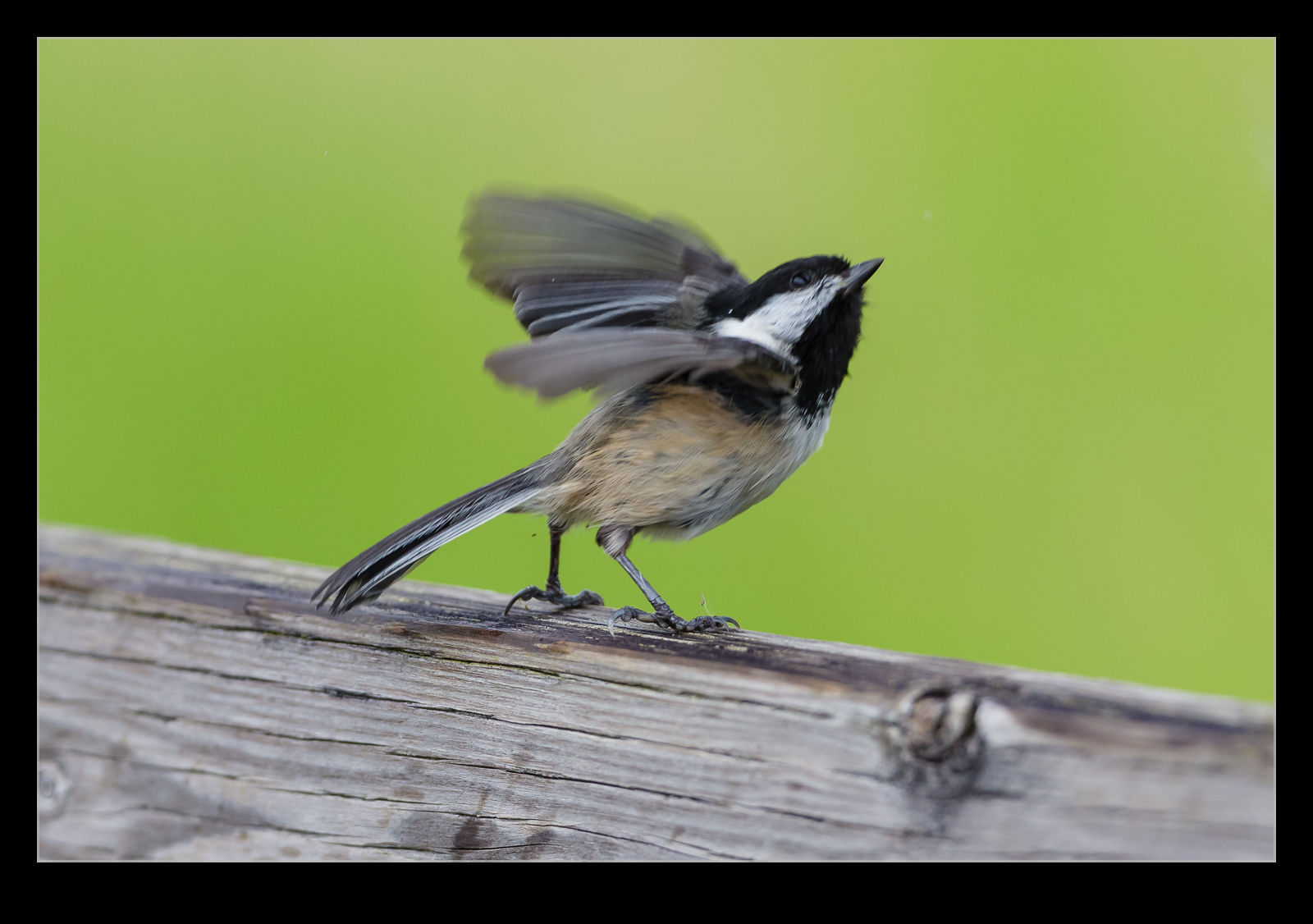 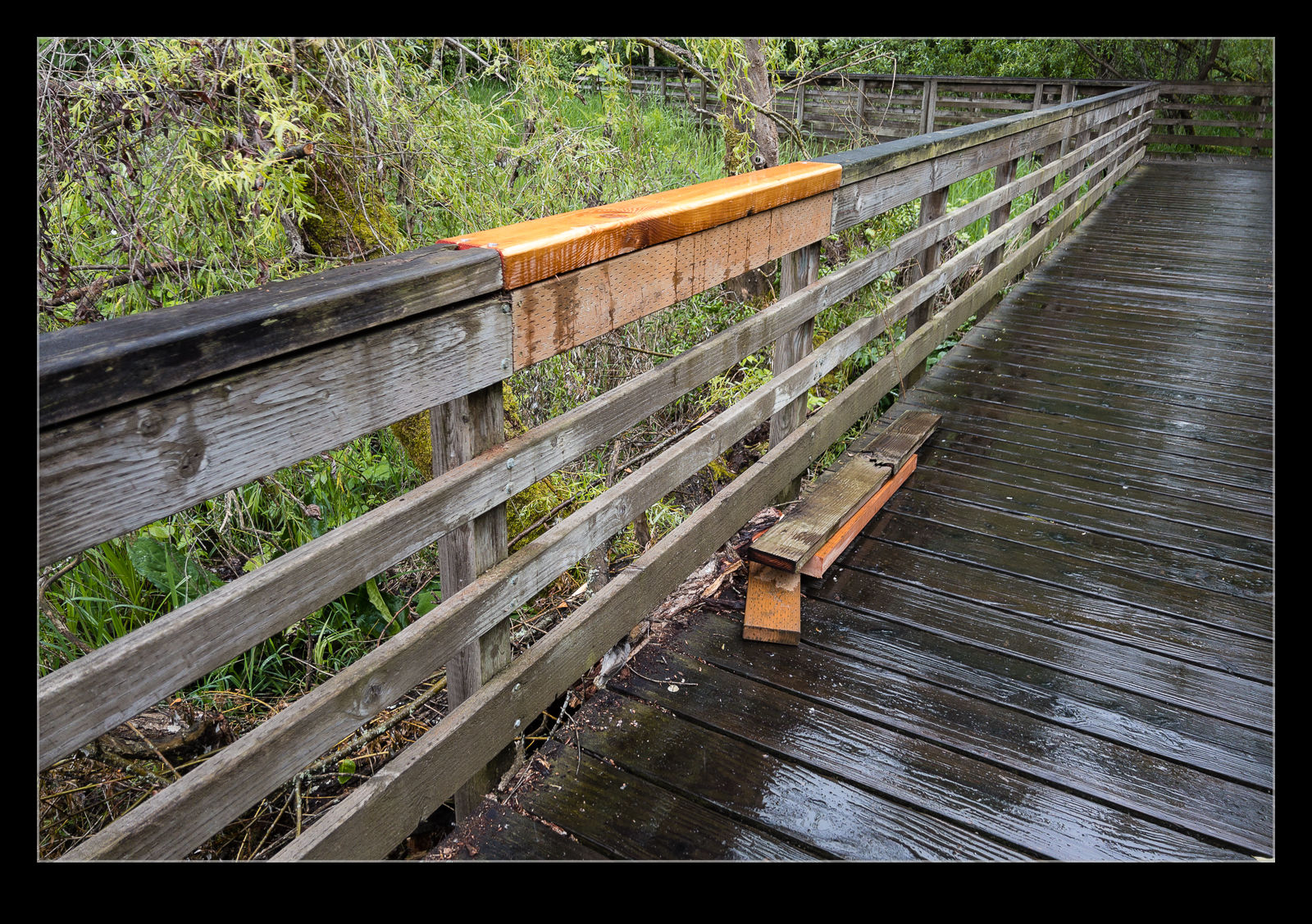 One evening, I took a walk down to Juanita Bay Park.  As it headed out to one of the platforms, I could see that the railing had a section that was freshly replaced.  A look over the edge showed that one of the trees had shed a large chunk.  I guess this must have wiped out the old railing material.  They had done a good job of getting the replacement in place but had left the branch where it had fallen.  I am glad I wasn’t there when it fell as I imagine my head might not have been so easily fixed. 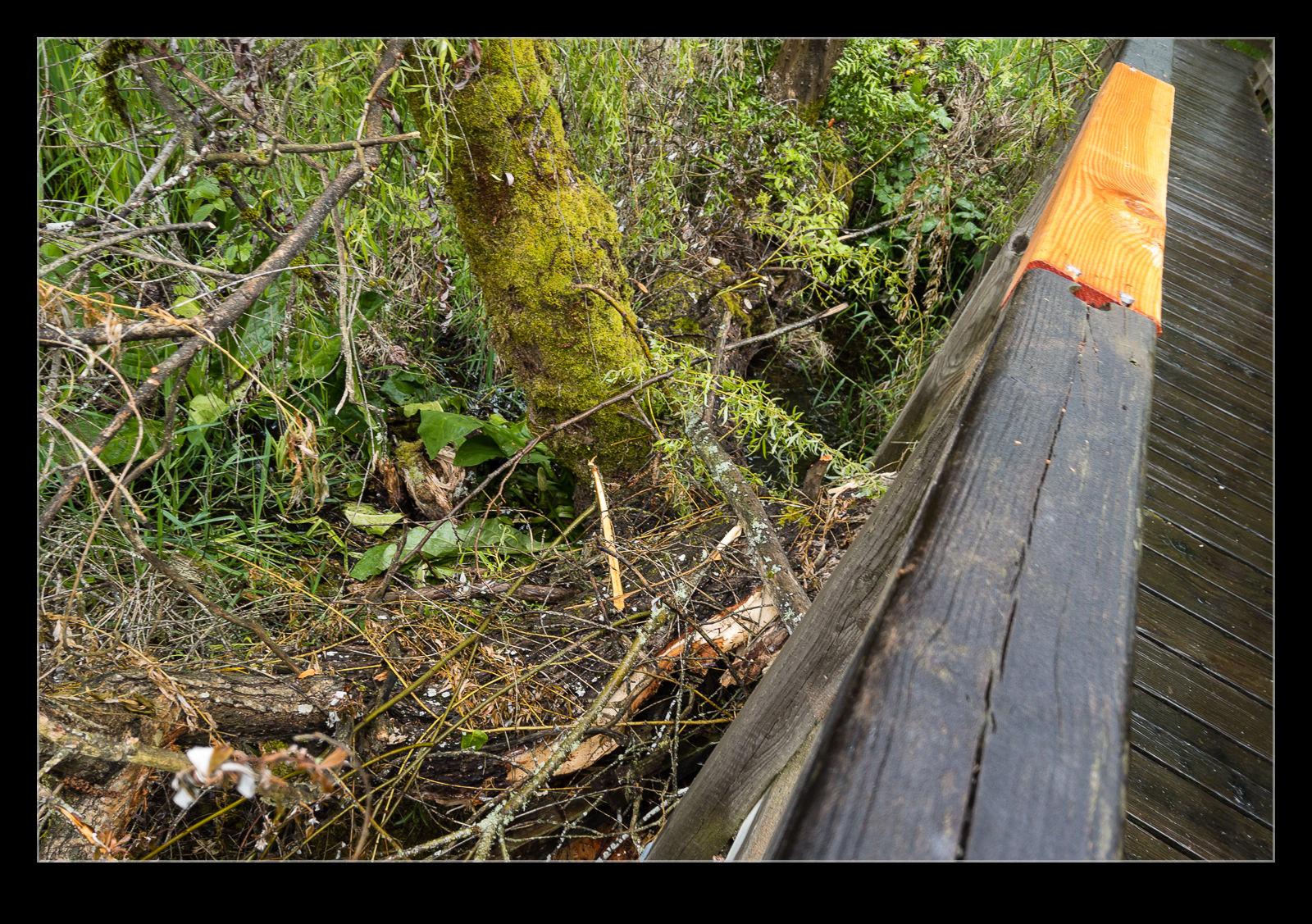 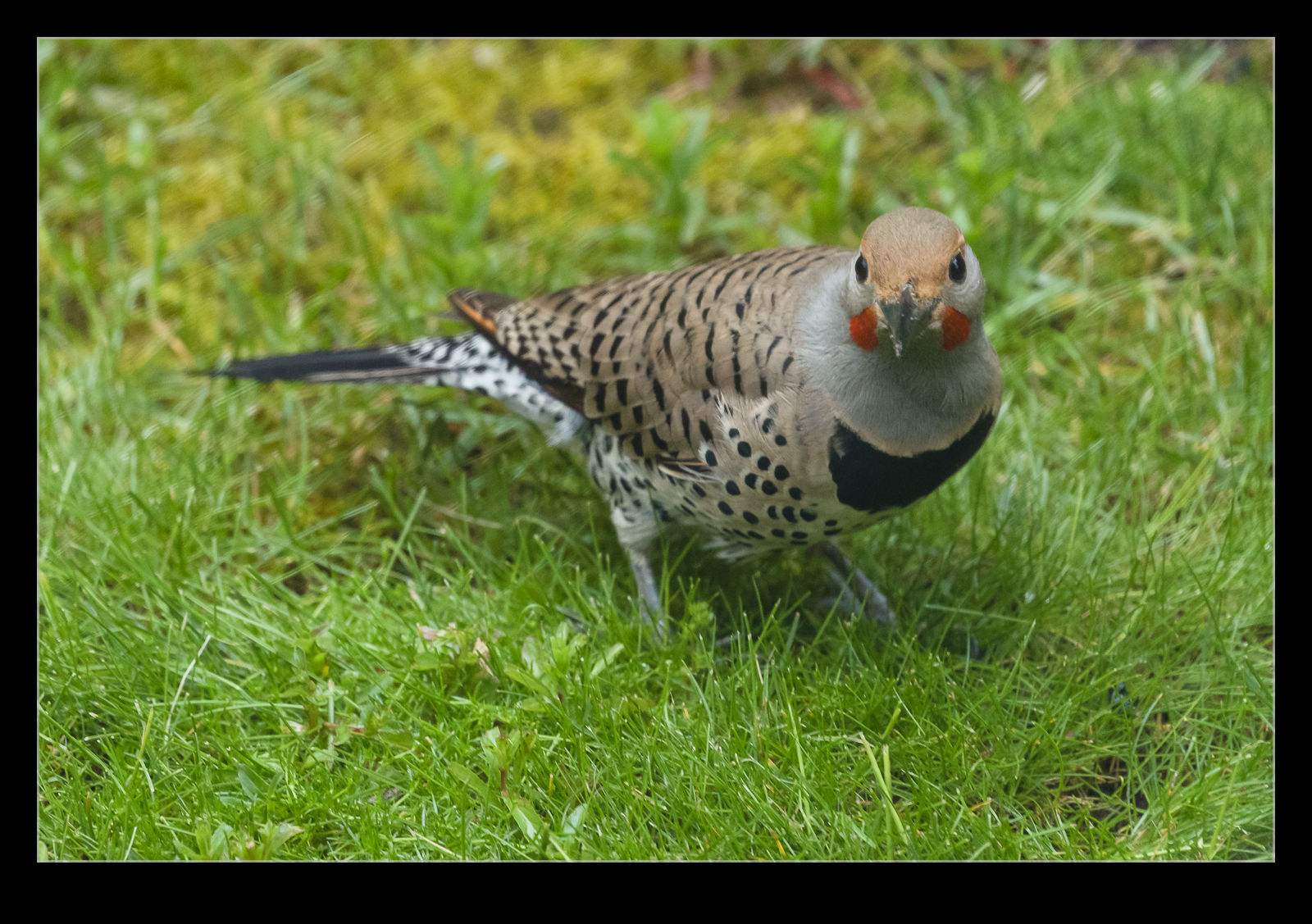 We get a ton of flickers in our area.  This species of woodpecker is very common and the spring is the time when they love to thrum on the gutters of the houses to mark out their territory.  However, I have had a really hard time getting pictures of them.  They are very easily spooked.  We sometimes get them in the back yard poking around in the grass for food but if they even detect your movement, they are gone. 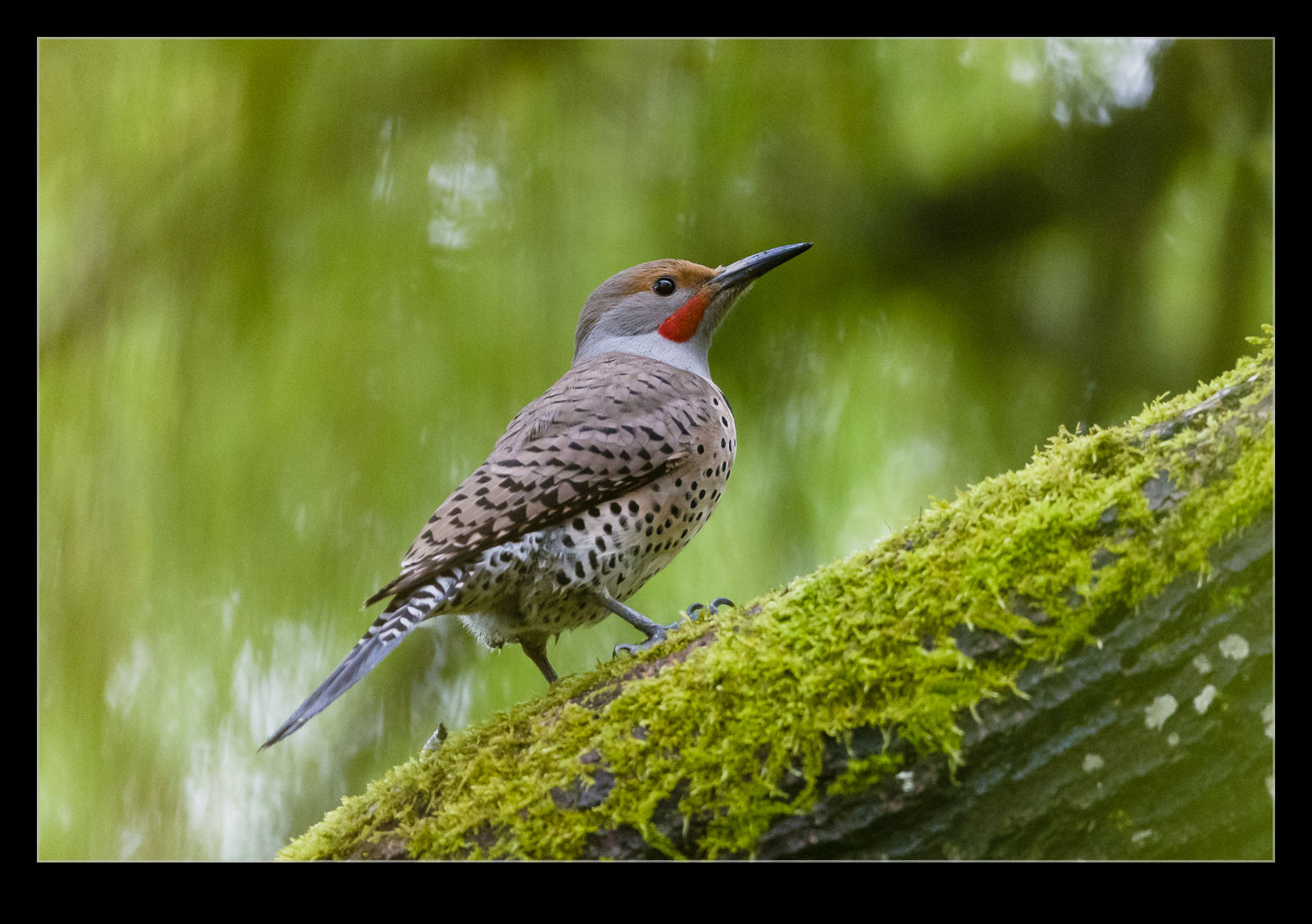 I recently had one back there and managed to get some shots through the windows of it.  Double glazing is not ideal to shoot through but you get what you can.  I also saw some in Juanita Bay Park where I was able to shoot through some branches to get a few more distant shots.  I have yet to get one flying which is a shame since there is a flash of red from the underside of the wings that I think would look great to capture.  I’ll keep trying! 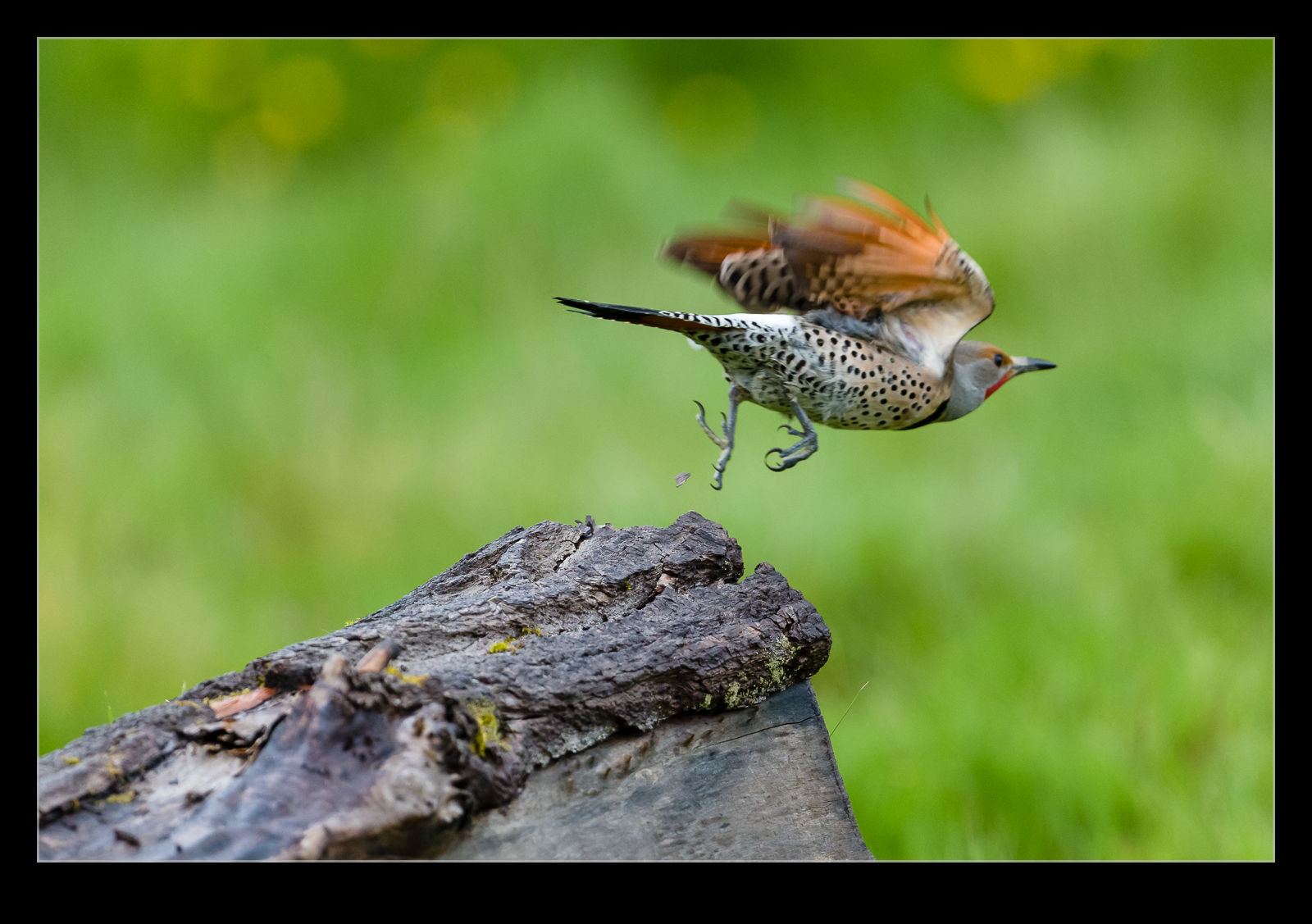 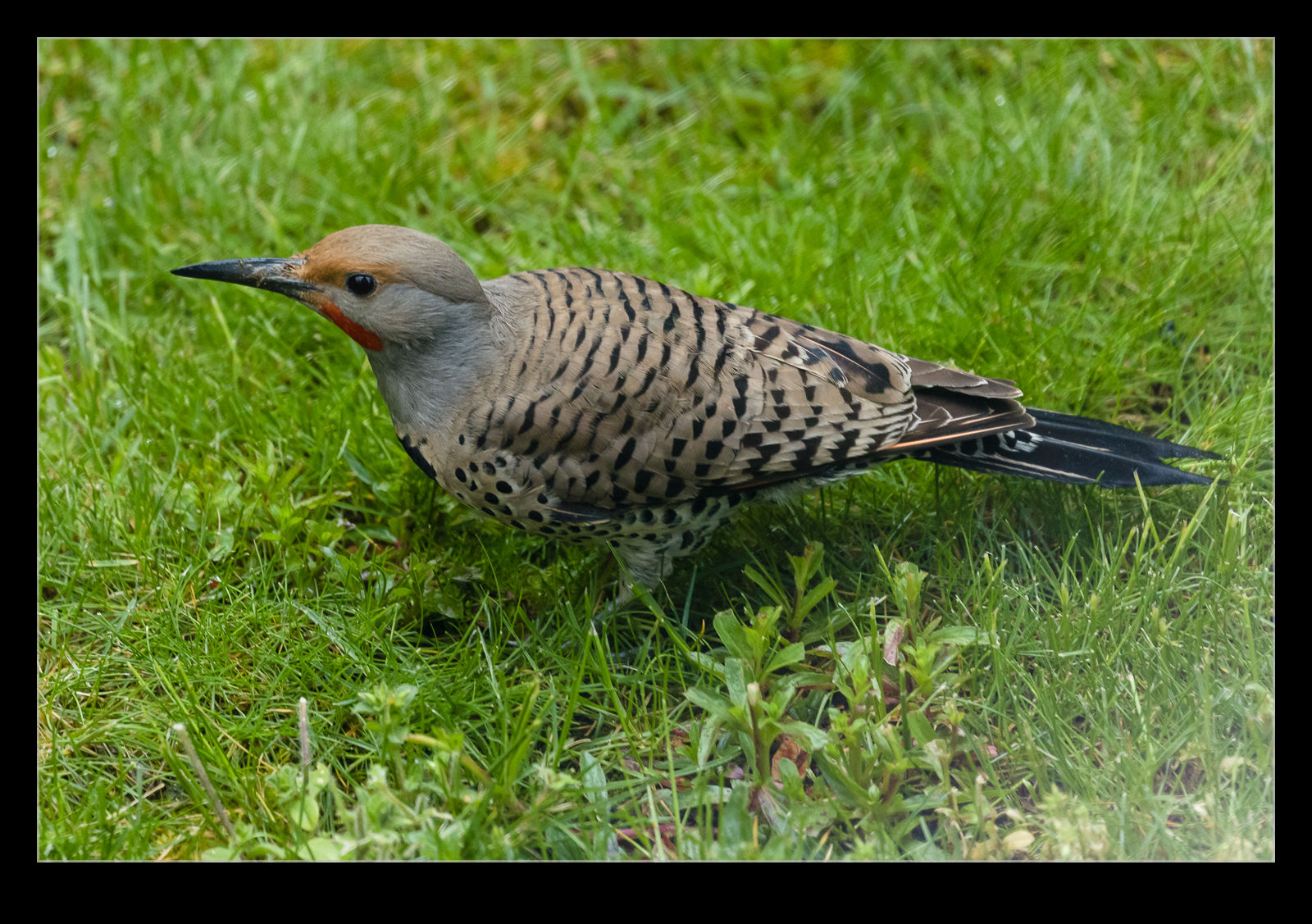 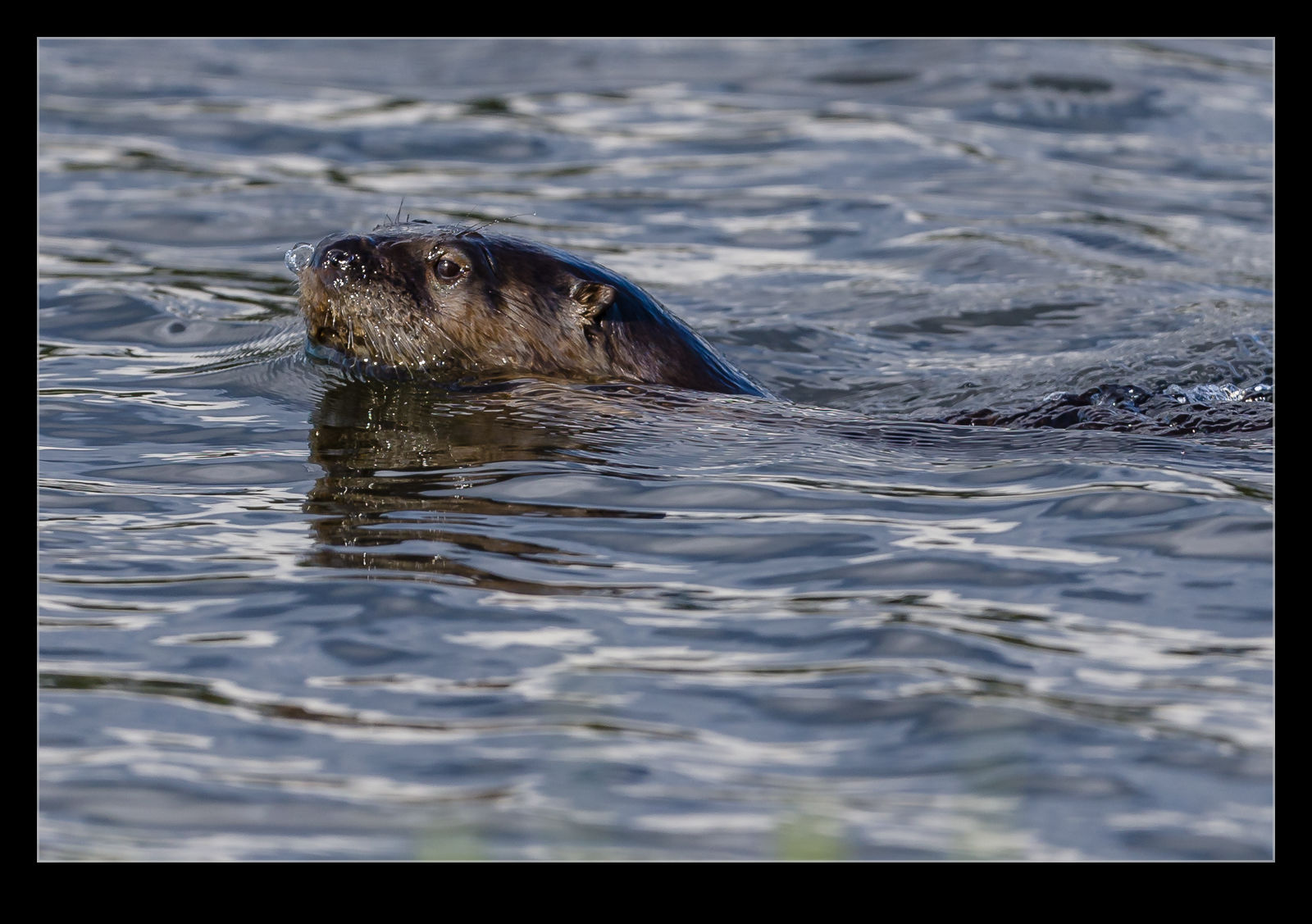 While looking at some shots of this otter swimming in Juanita Bay, I noticed it was breathing out through its nose and creating some bubbles in the water ahead of it.  It seemed like a silly thing but of course will happen all of the time when they are swimming.  However, I like the idea that it is being silly and doing it on purpose so let’s go with that instead. 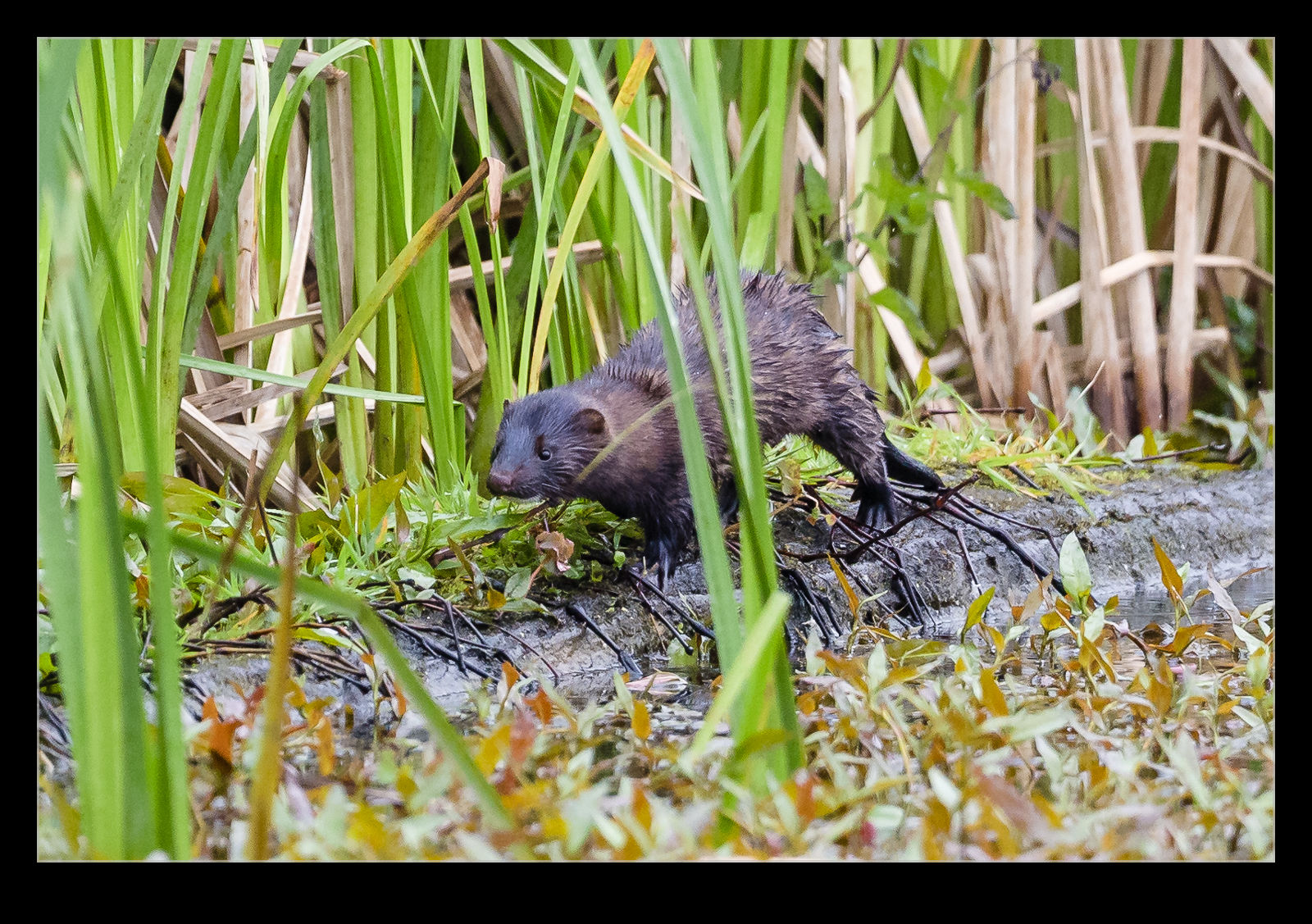 I was watching the water in the bay looking for the beaver to come out and feed.  I saw something swimming across the surface and at first thought it was a beaver – if only a small one.  It didn’t look like it was moving like an otter but it also didn’t seem like a beaver.  A while later, I saw some more movement on the water heading for the shore.  It looked a little different but I couldn’t say what it was.  It then climbed out on to the bank and ran along a log.

I grabbed a few shots and thought it looked a bit like an otter but somehow different.  I then lost it again and carried on shooting other subjects.  When I got home, I went through the shots and realized I had been looking at two different creatures.  The first one will get its own post in due course.  The second one had me confused.  I started googling images of stoats, ferrets and so on until I got to mink.  The pictures of the mink look exactly like the animal in my shot.  I think that is what it is.  I have never seen a mink in the wild before so this was a pretty cool find for me.