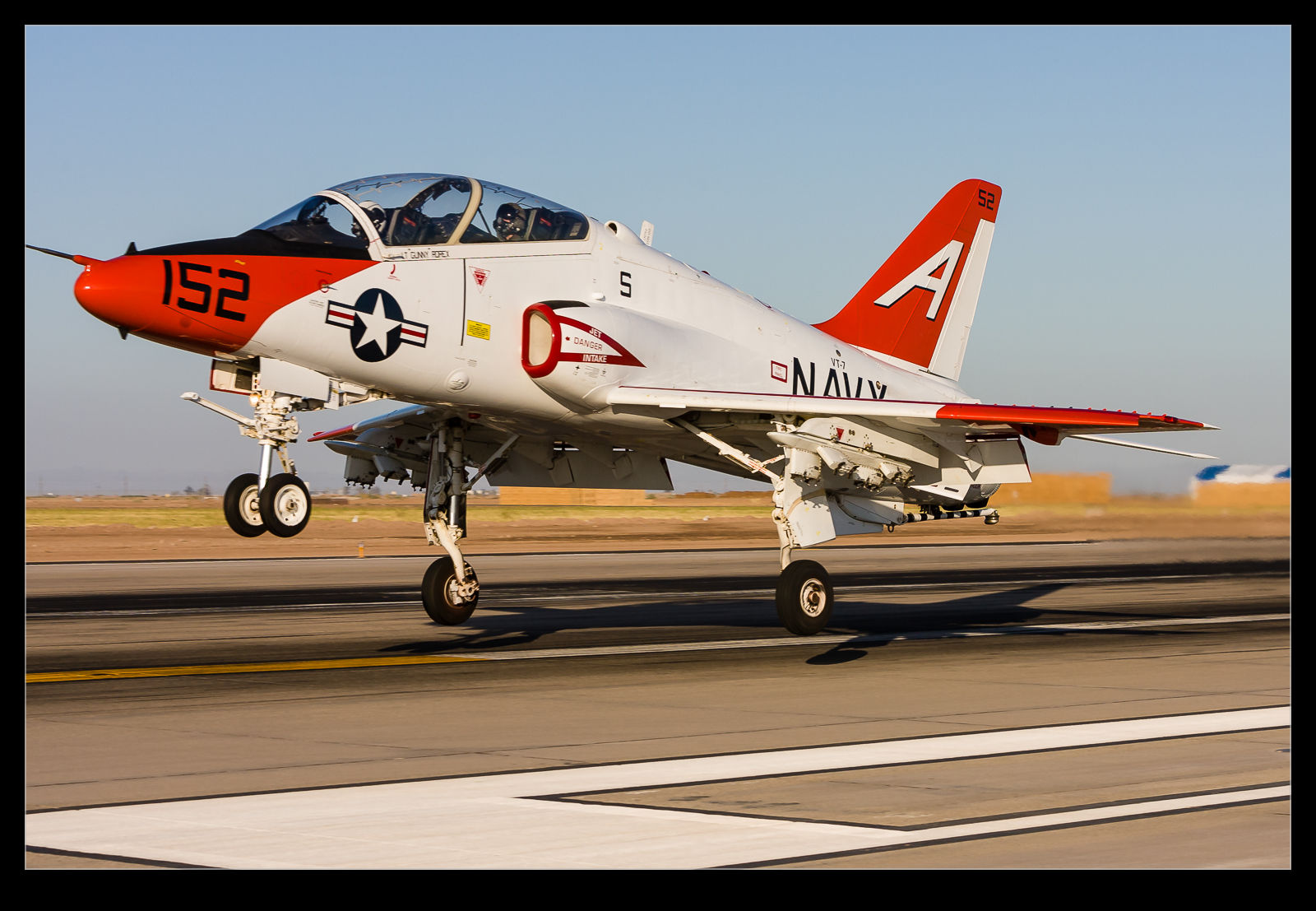 With a title like that, who could resist reading this one!  The T-45 is a plane I have a close affinity with.  It was my involvement with the project that first brought me to work in the US and it is responsible for me meeting Nancy.  Aside from that, I got quite involved in many aspects of the plane’s design so feel like I know it quite well.  It did not have a smooth entry to service and went through a multitude of upgrades prior to being accepted in to service.  One of the lesser known items was the nose gear doors. 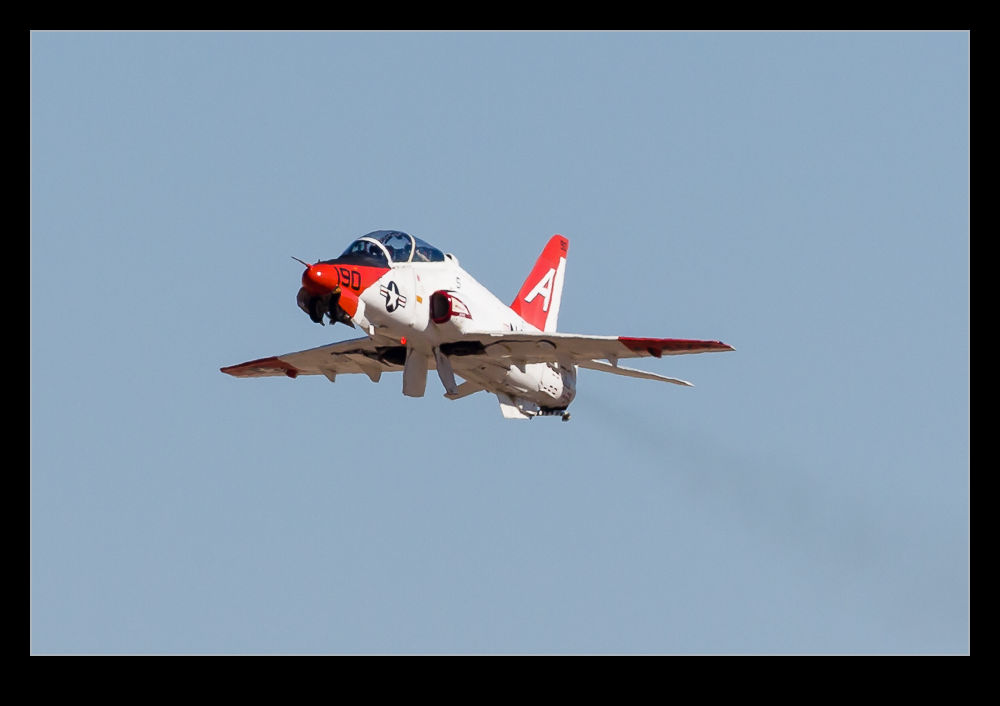 These were lumped in to a bunch of issues relating to directional stability.  The front fuselage of the T-45 is considerably deeper than the original Hawk but the design originally had the same fin and actually lost the ventral fins that were either side of the airbrake on the original.  Directional control was enhanced by adding a fin cap, modifying the rudder design and adding a new ventral fin on the arrestor hook fairing.  One other change was made too. 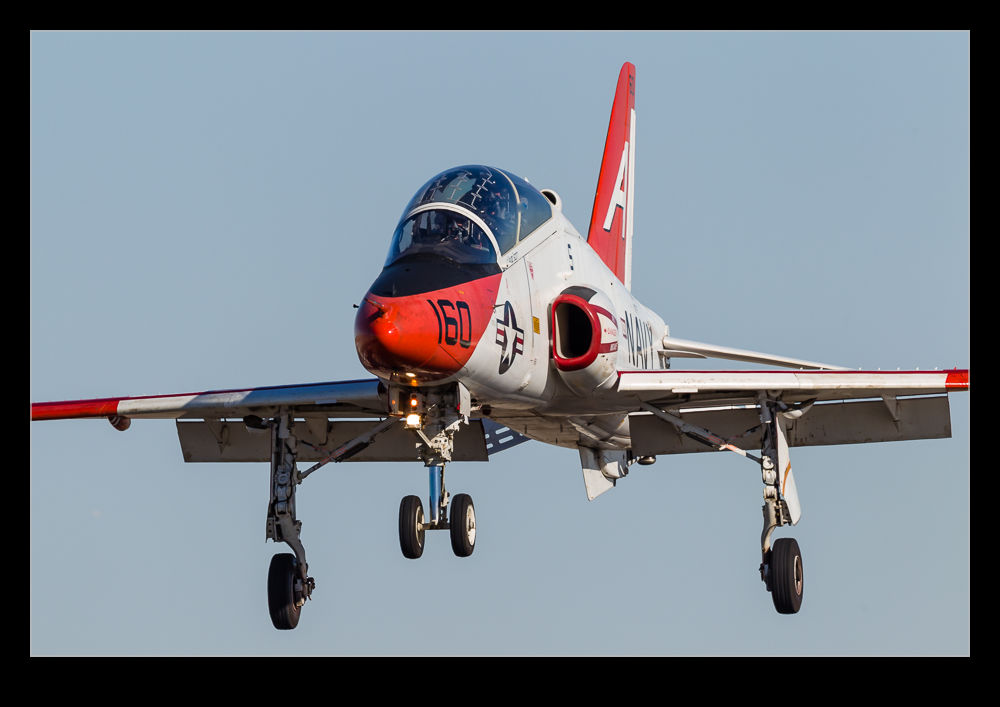 The carrier launch requirements meant the simple nose gear was replaced with a far chunkier assembly with dual wheels and the catapult launch bar, all of which was beefier enough to take the catapult launch loads.  Covering this all up were big nose gear doors.  These were originally either open or closed.  If you look at the doors, you can see they are like adding large fins to the front fuselage.  This is very destabilizing.  The rear doors must stay open when the gear is down but the front doors were rescheduled to close again once the gear was down, making a substantial difference in directional stability.  They have to open while the gear is transitioning and stability is reduced during this phase but it doesn’t last long.  However, if you watch the retraction and extension sequence, you get a brief glimpse at how big these doors really are.  From what I understand, a similar issue affected the F-35 and only the first airframe, AA-1, had the old single huge gear door. 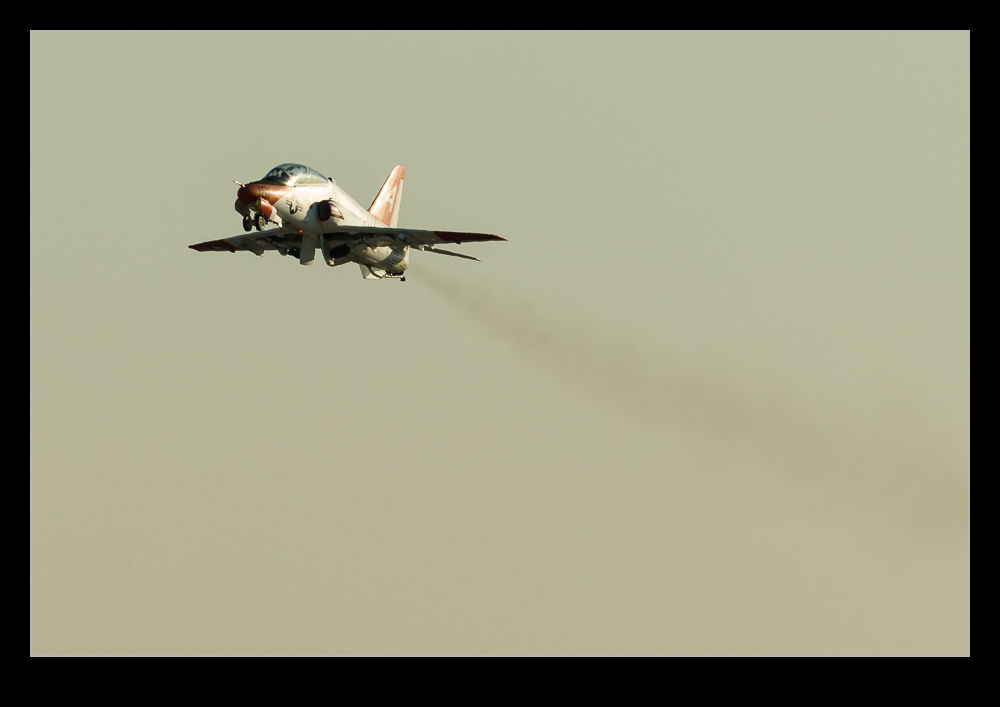 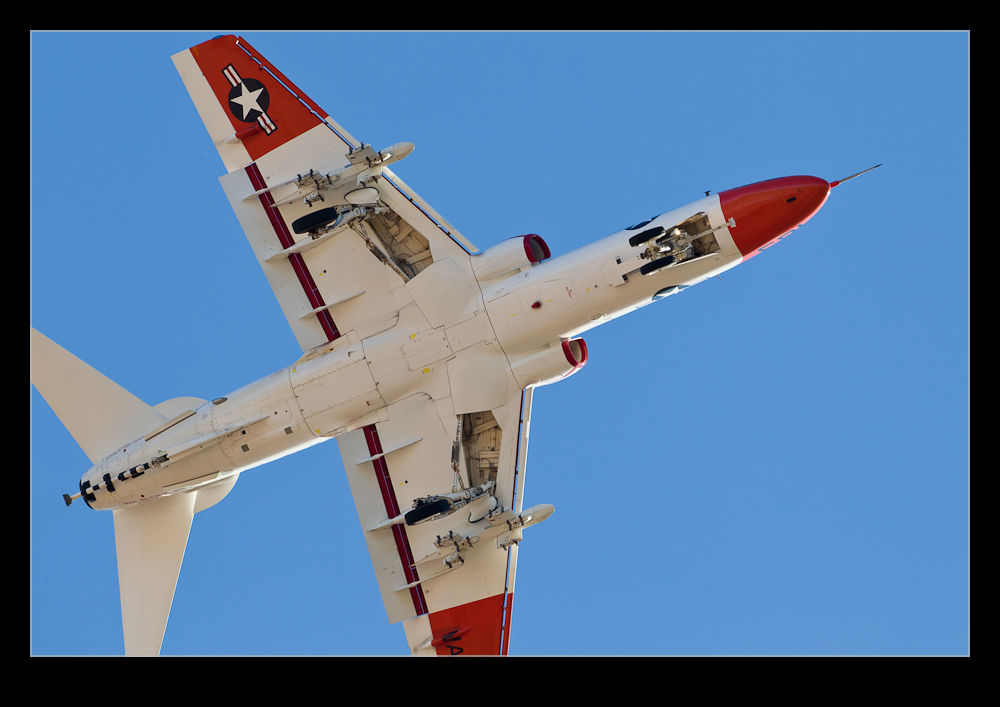 You might have thought that we had covered El Centro enough.  Nah!  The day after the photocall, I was planning to head across to San Diego.  However, I didn’t have to be there until lunchtime and it is only a couple of hours drive to get there.  Since I was going to be up early, why not finish of the time at El Centro with one more visit to the base to shoot from outside. 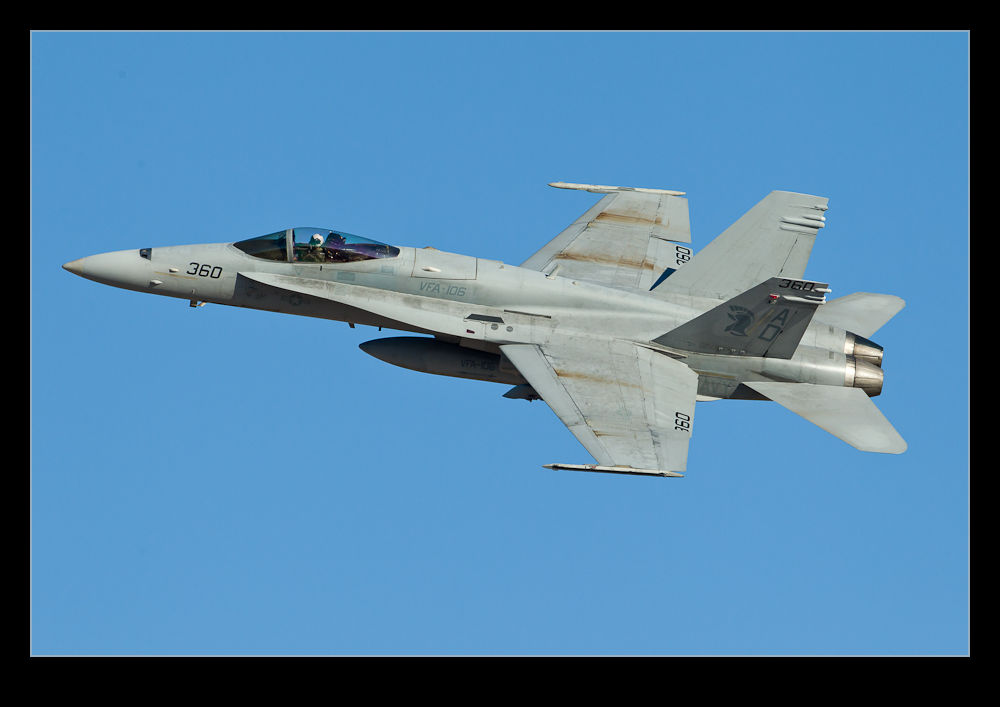 I wasn’t going to be there too long but there was the probability of an early launch wave and they would recover before I was going to depart.  I got there early enough for some of the first launches and was the first visitor.  I was going to be joined by some of the friends from the photocall and there was a second visit scheduled by another group for that day so the attendees for that were likely to show up before too long. 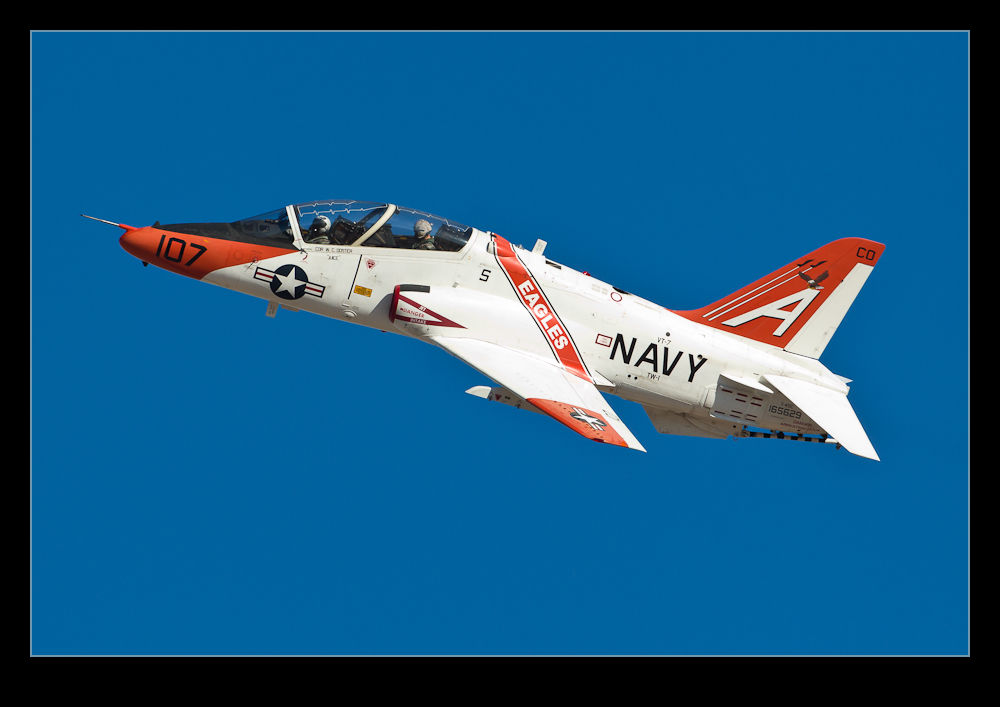 We did get a similar bunch of traffic to the previous day with waves of T-45s heading out as well as some F/A-18s doing their thing.  I got to cover the first wave without any trouble and then quietened down around the time I was planning on leaving.  However, leaving proved to be a bit more troublesome than I would have expected. 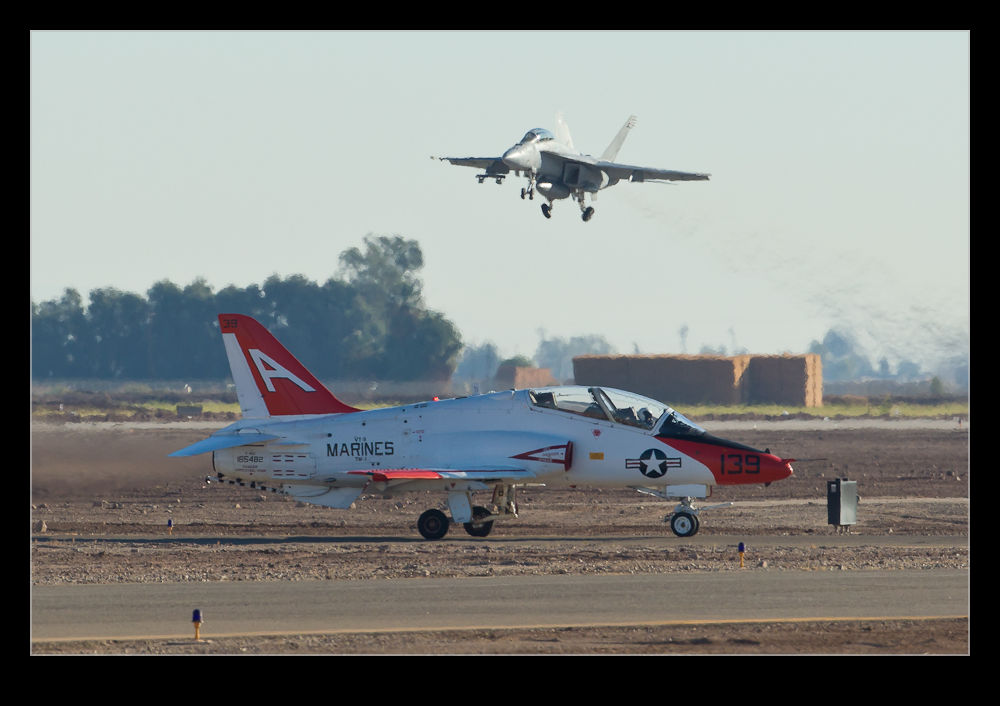 Some of the people that arrived for that day either hadn’t been before to the location and/or were not very thoughtful when it comes to accommodating those around them.  The location is alongside a drainage ditch with a drop off to a lower level which then has another ditch beside it.  There is space to park along the ridge and leave space for other vehicles to get past. 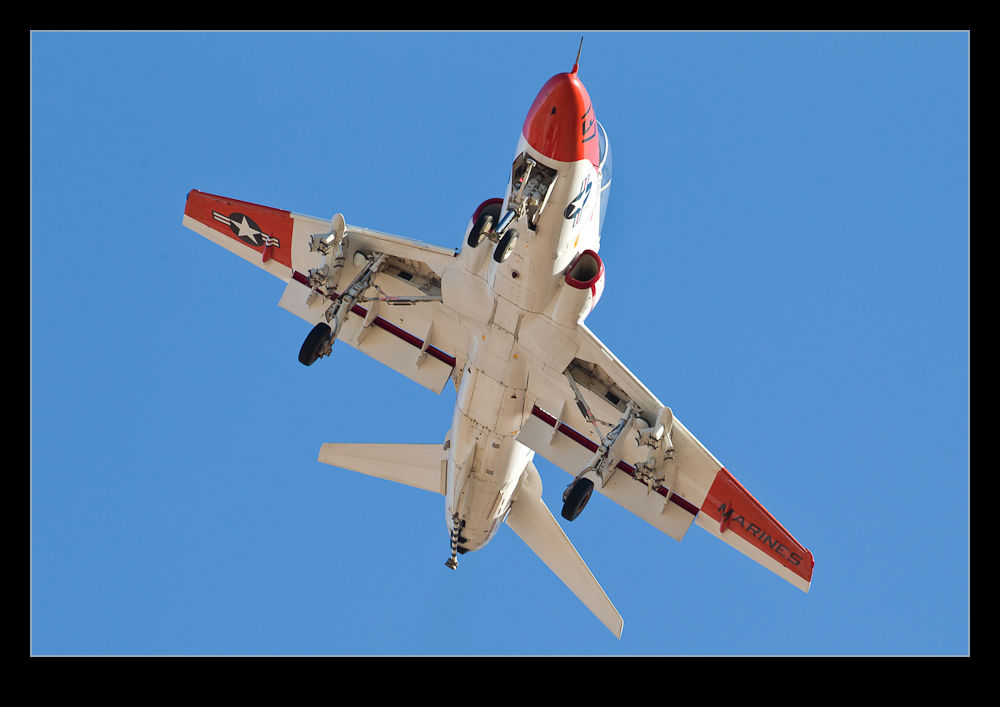 Sadly, some of the new arrivals hadn’t bothered with that concept.  When it came time for me to leave, the easier was out – since there were poorly parked vehicles both ahead and behind – was actually backwards.  Reversing around the parked cars on the top of the ridge was hardly fun and then reversing the remaining length of the ridge was also less than enjoyable.  It wasn’t difficult but the presence of water on one side and a drop on the other tends to increase the level of concentration. 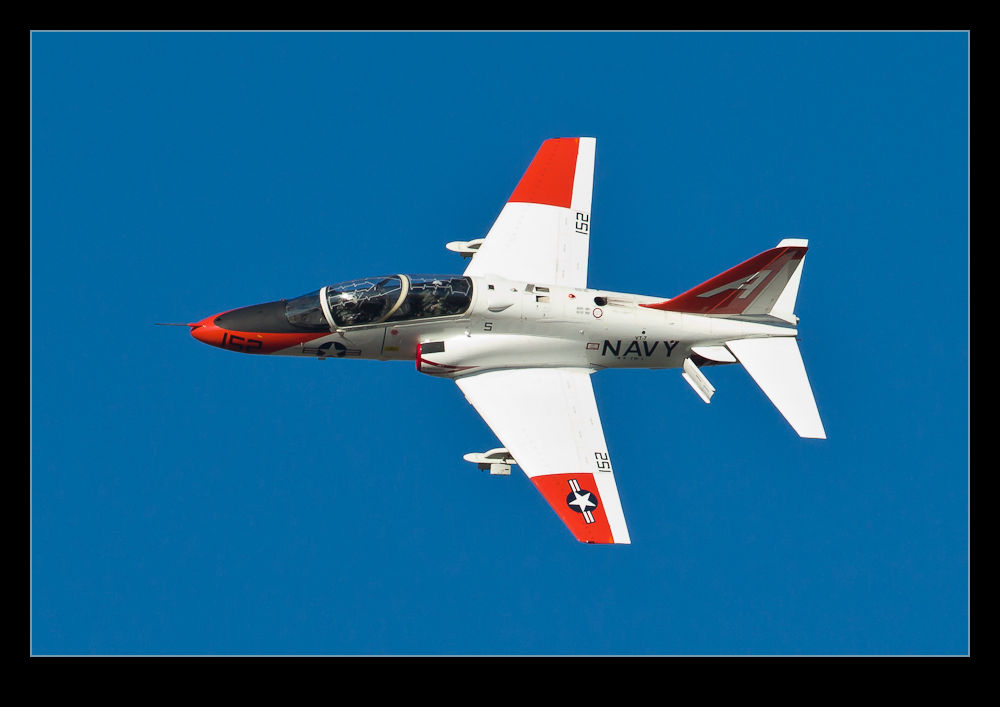 Anyway, despite the thoughtlessness of a few, I did make it out and got a good start to the day.  Sadly, I should probably have hung around a bit longer since my next stop didn’t go quite according to plan – but that can wait for another post. 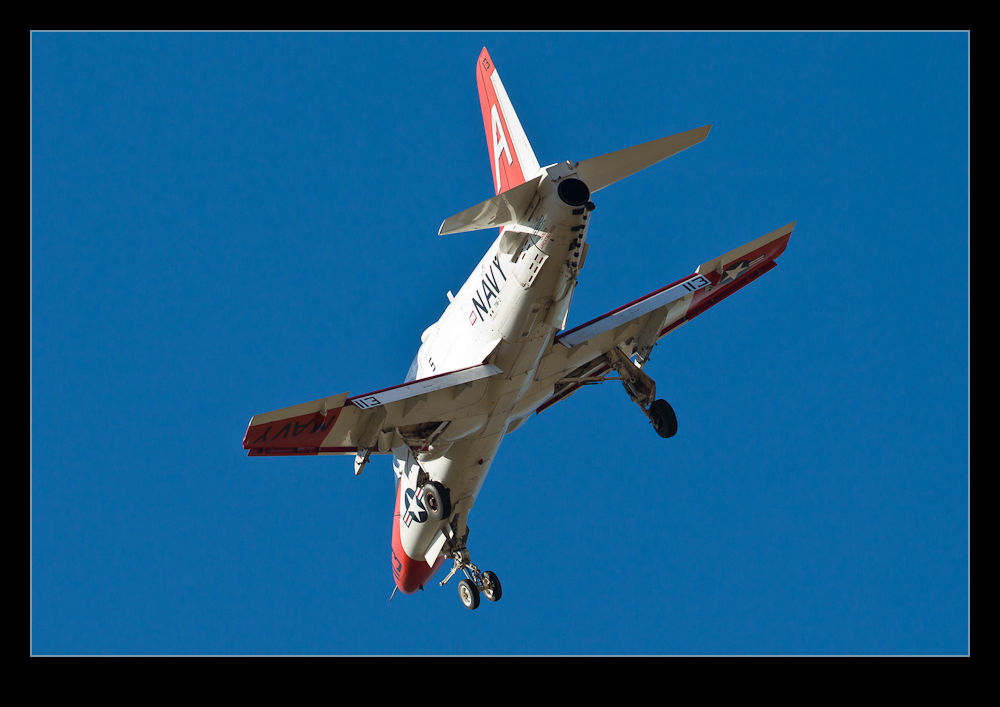 We were kindly hosted by the team at NAF El Centro for a photocall.  I will post later with some of the shots from the visit to the base itself.  However, one of the things I wanted to do this time that I learned following my previous visit to El Centro was to shoot more video.

I was still going be predominantly shooting stills but the motion and proximity of the aircraft is hard to appreciate sometimes from a still image (a failing of mine as a photographer of course).  Video gives you more of a  sense of the activity.  Therefore, I took a GoPro with me to the day and mounted it on top of my camera on the hot shoe.

This had the advantage of allowing me to shoot video at the same time as stills.  It did have a couple of disadvantages.  One is that the sound of the shutter clicking is picked up by the camera on the soundtrack.  When the jets are close it isn’t too bad but when they are further away, it becomes more intrusive.  Second, the GoPro is fixed at quite a wide angle so it makes everything look a little further away than it is.  However, this is an add-on to my normal shooting so both compromises are worthwhile.

I did shoot a small bit of video with one of the SLRs and it probably won’t be hard to spot which bit of film that is when you watch.  I didn’t bother with any music since I think the sound of the jets does a pretty good job.  Here is the result. 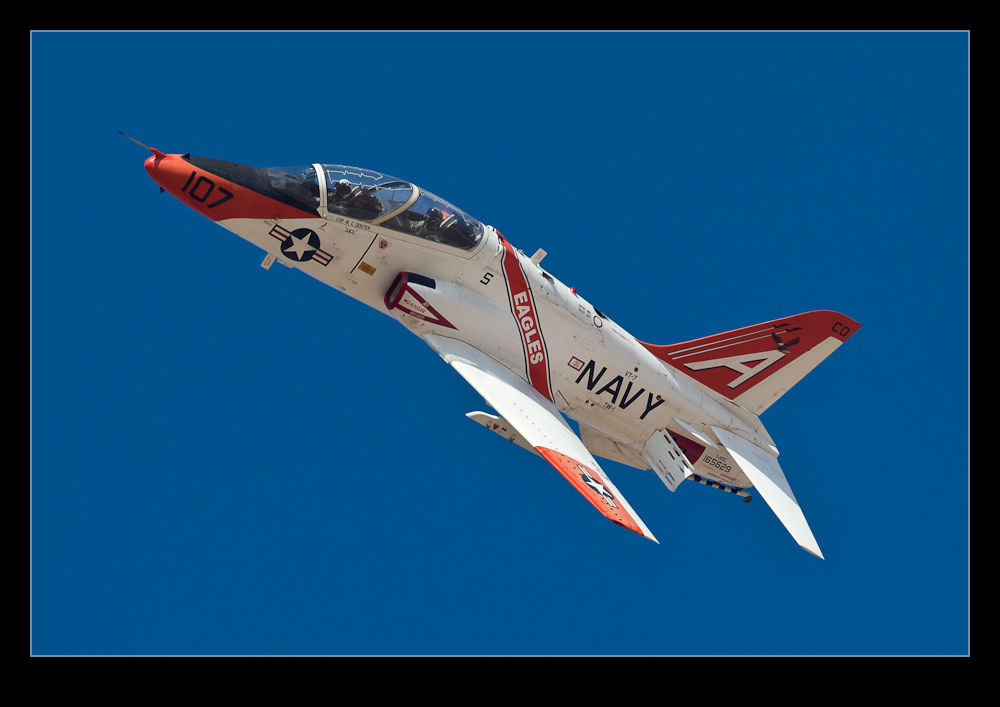 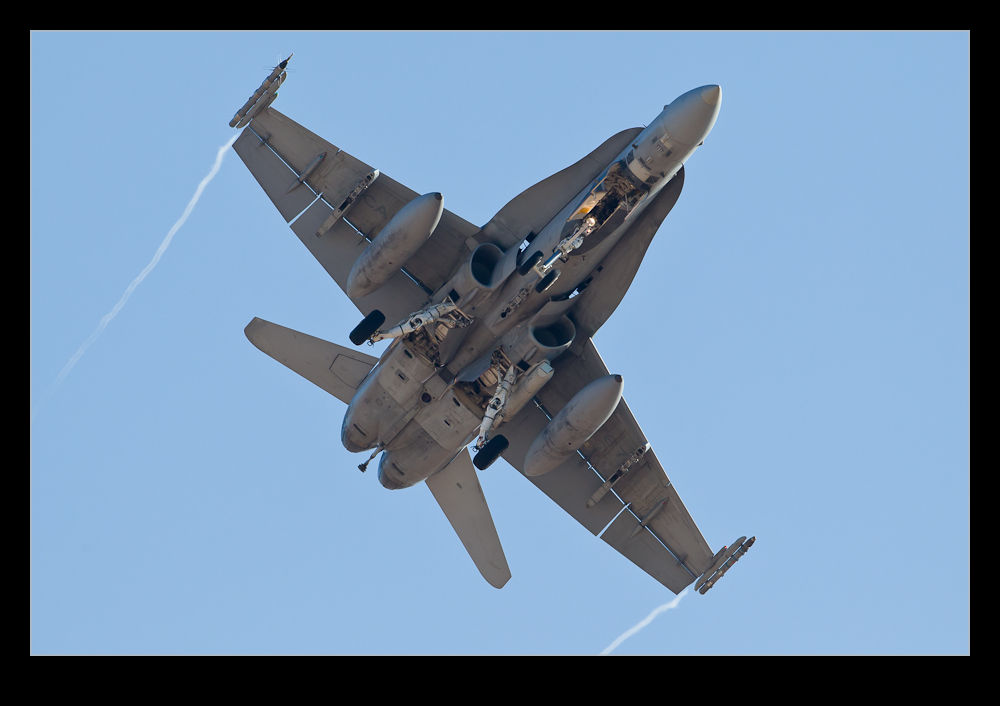 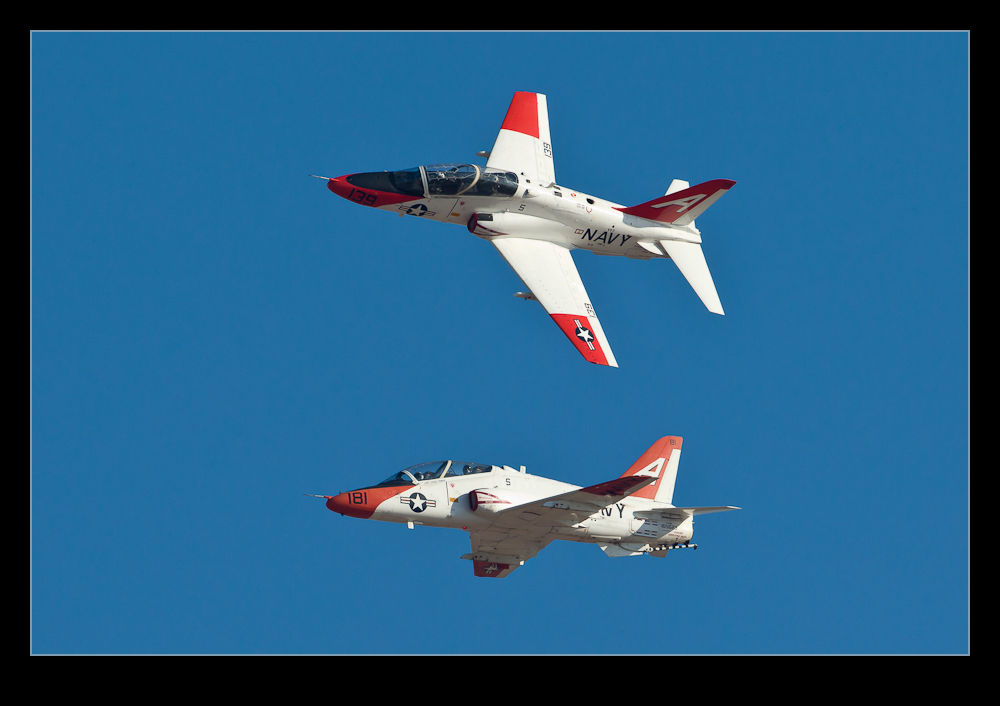 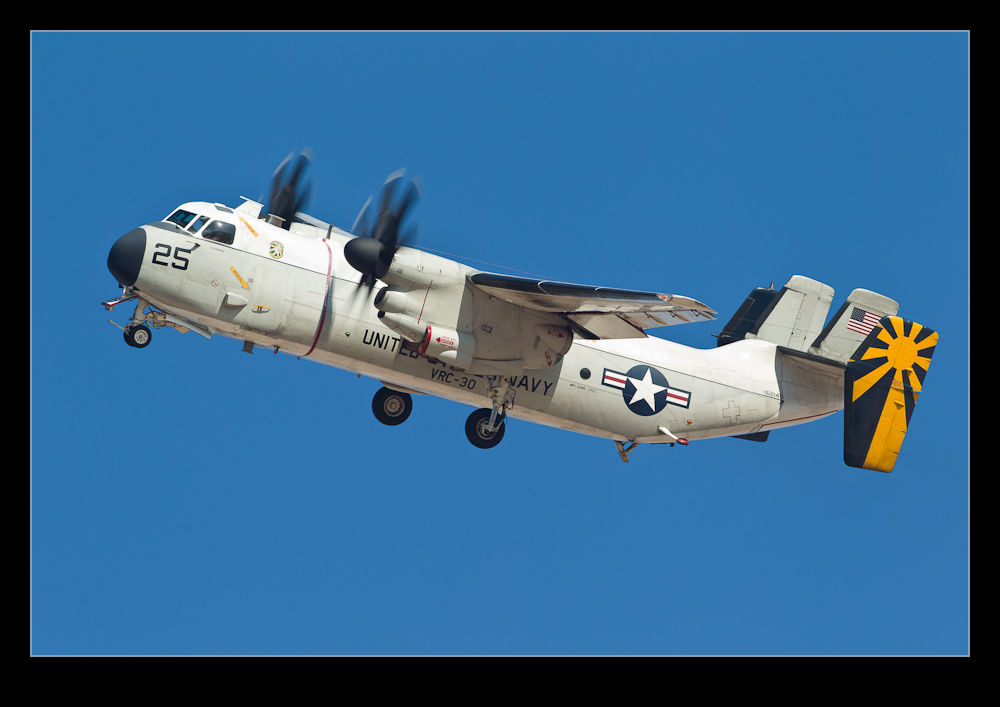 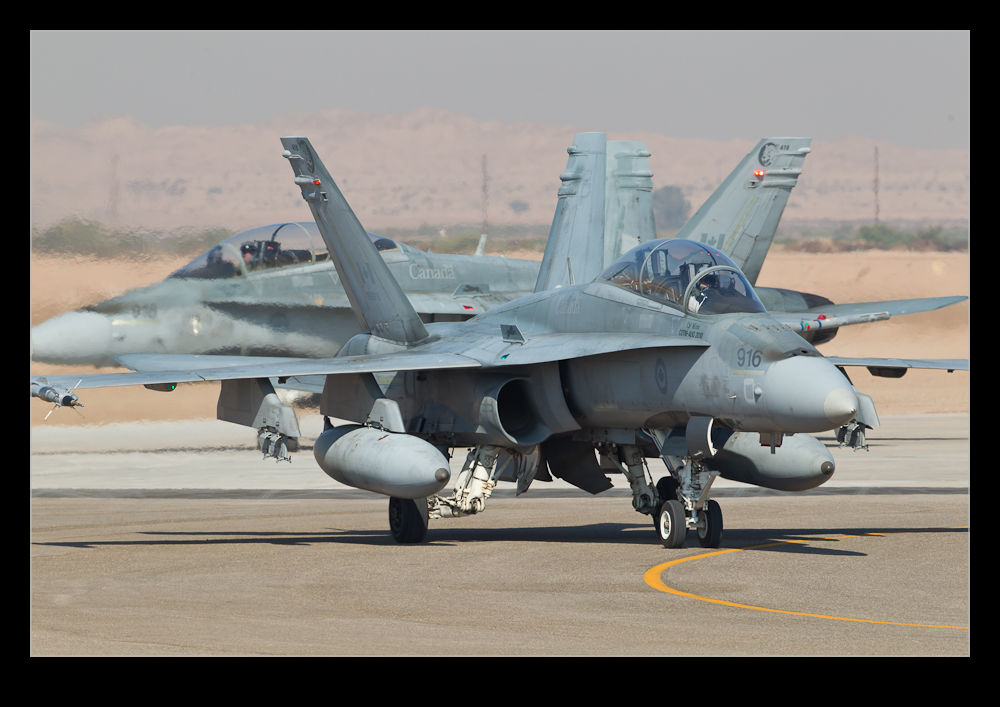 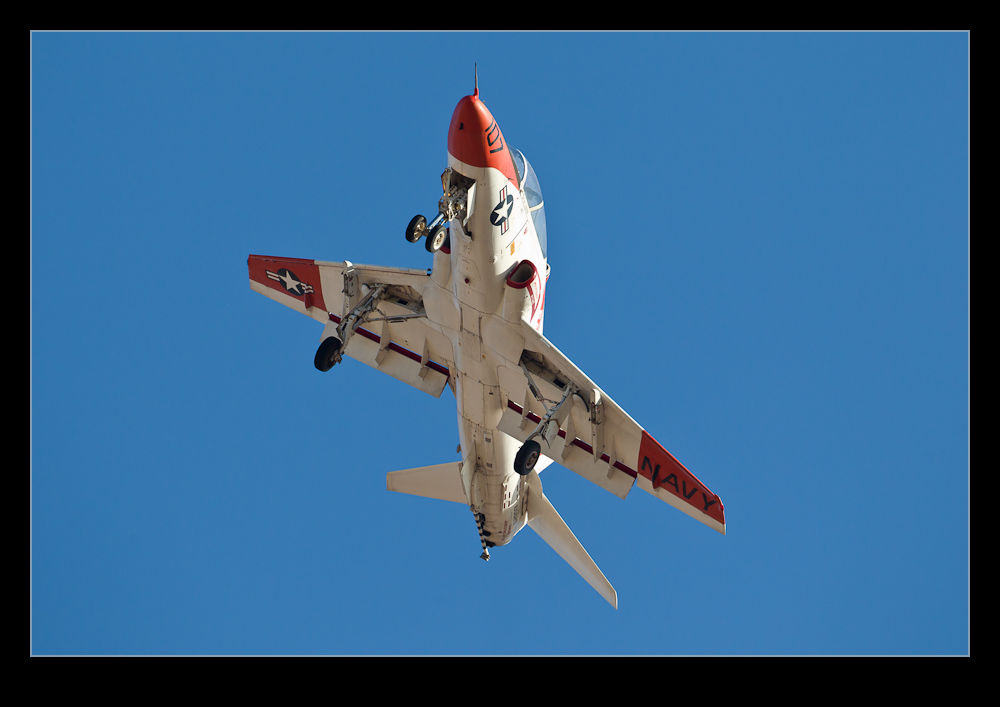 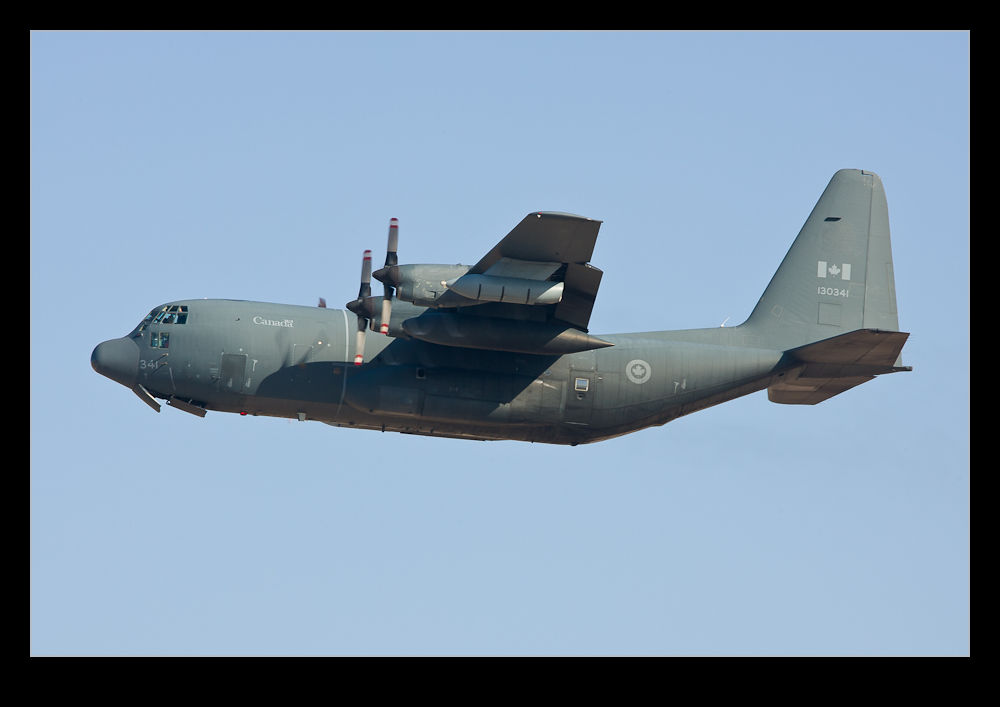 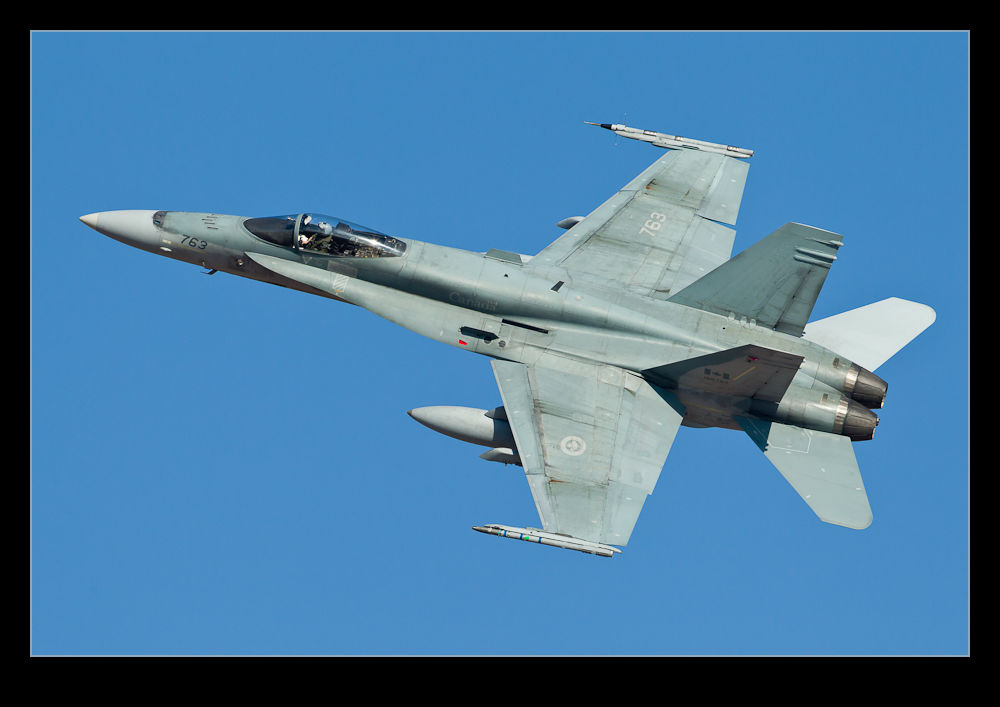