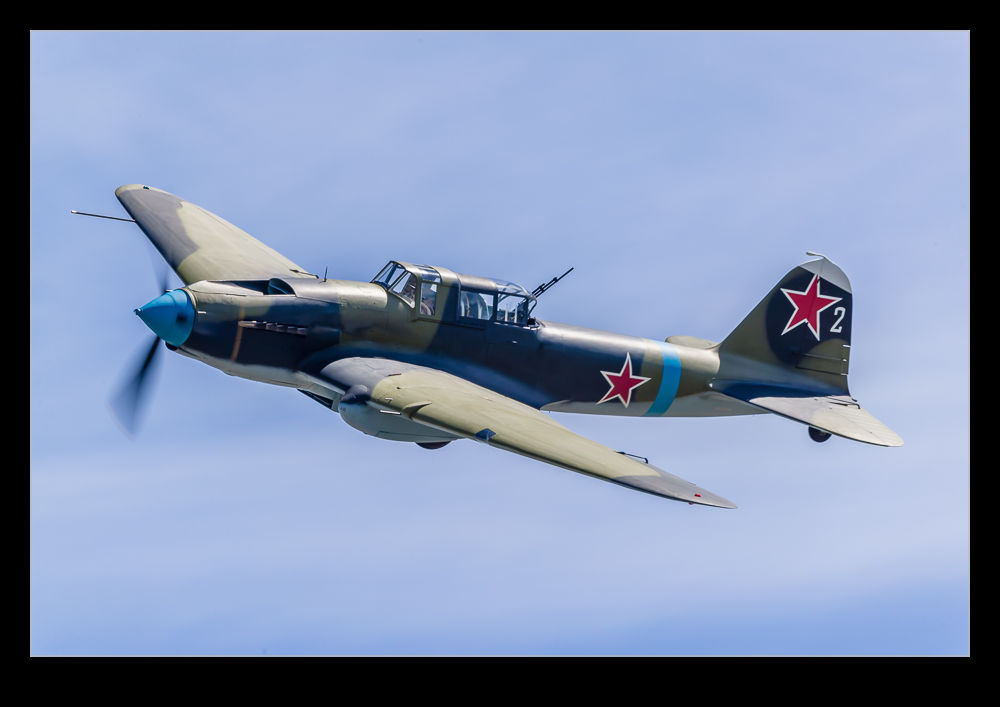 The FHCAM IL-2 Shturmovik has been airworthy for a while but I have previously only seen it on the ground.  Skyfair was my first opportunity to see it flying so I was rather pleased.  This is a pretty rare type and a new one for me so having it display was a treat.  The sun was rather high when it flew which is a bit less than ideal for a plane with a dark paint scheme but that is a small price to pay.  It flew a number of passes, all of which felt nice and close.  Great stuff. 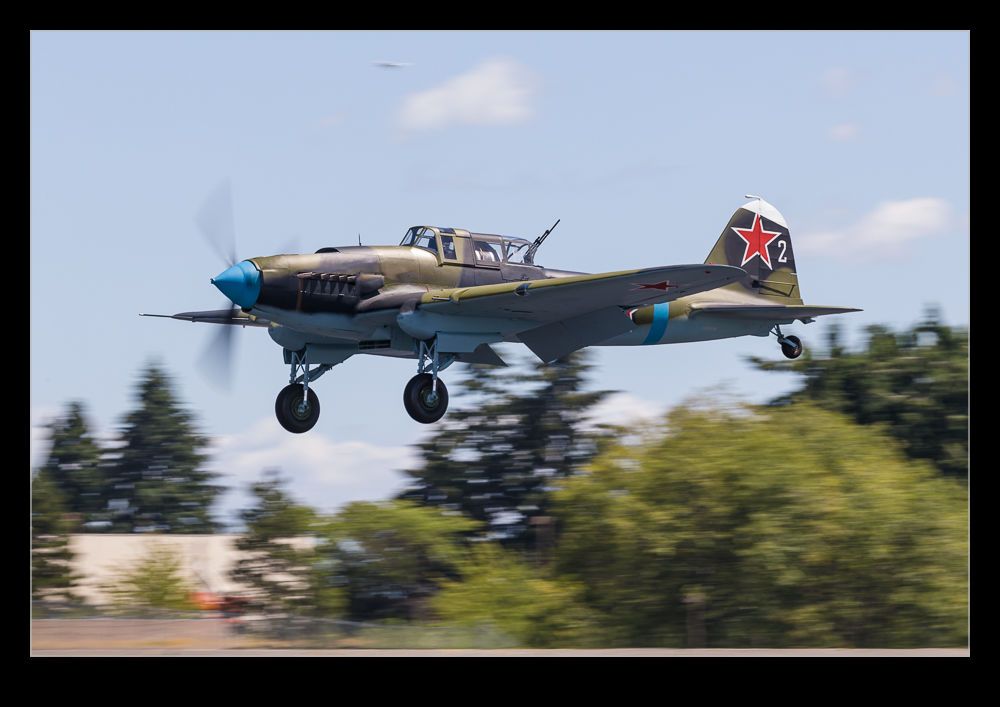 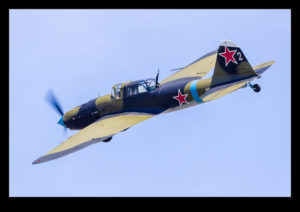 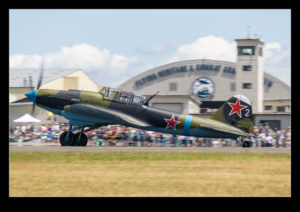 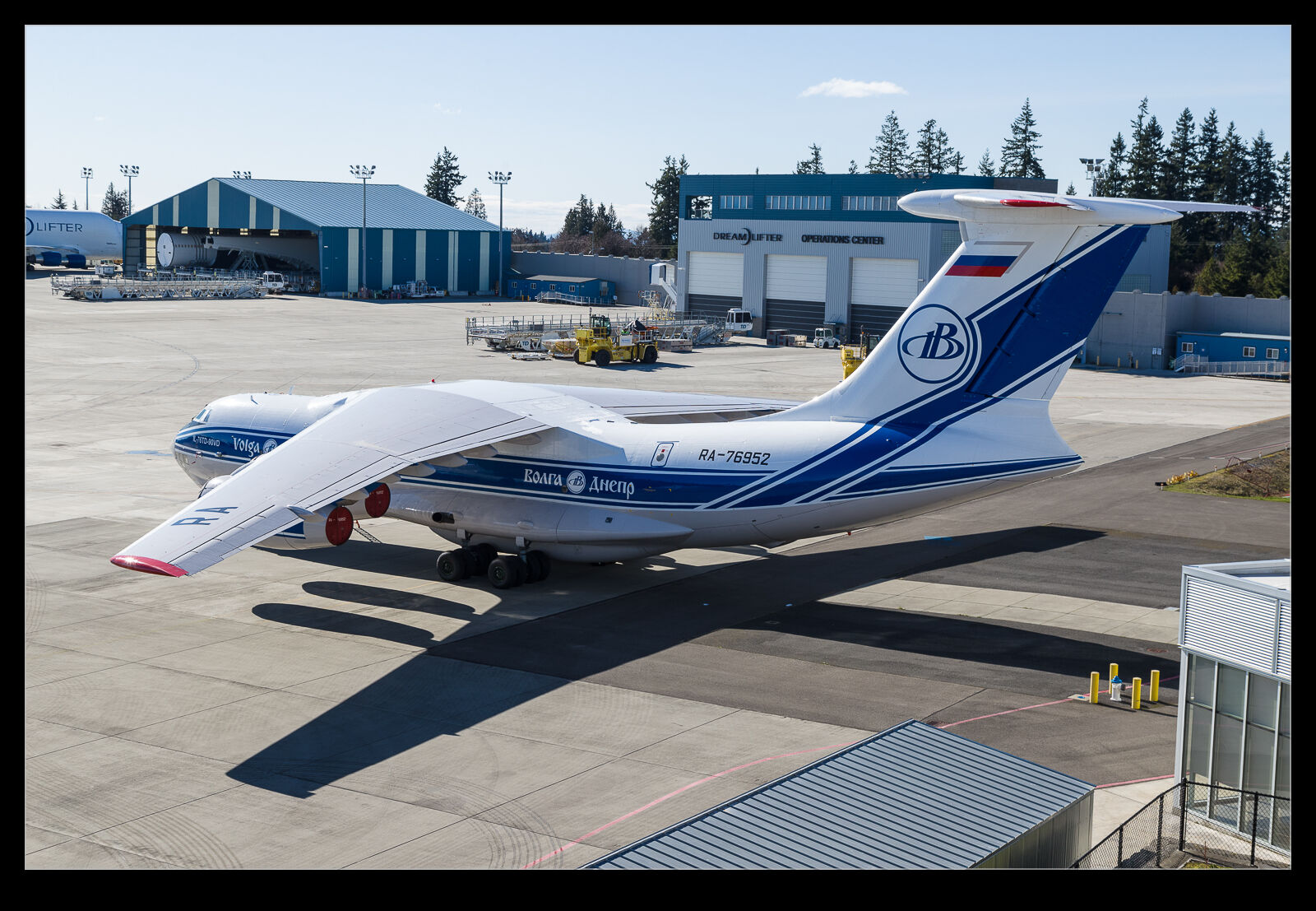 Suddenly IL-76s are appearing at Paine Field on a regular basis.  I came across one by surprise not long ago but didn’t get a chance to track its progress.  However, a quick check on Flightaware showed it had departed.  Fortunately, I checked the flight and realized that it did a quick pattern and then landed again.  After that, it didn’t move for ages and was still there when I next visited.  I wonder whether it got sick and has been awaiting parts?  Anyway, since taking this shot it has departed to Iceland successfully.  At the time of writing, it is back though.  So much Ilyushin traffic! 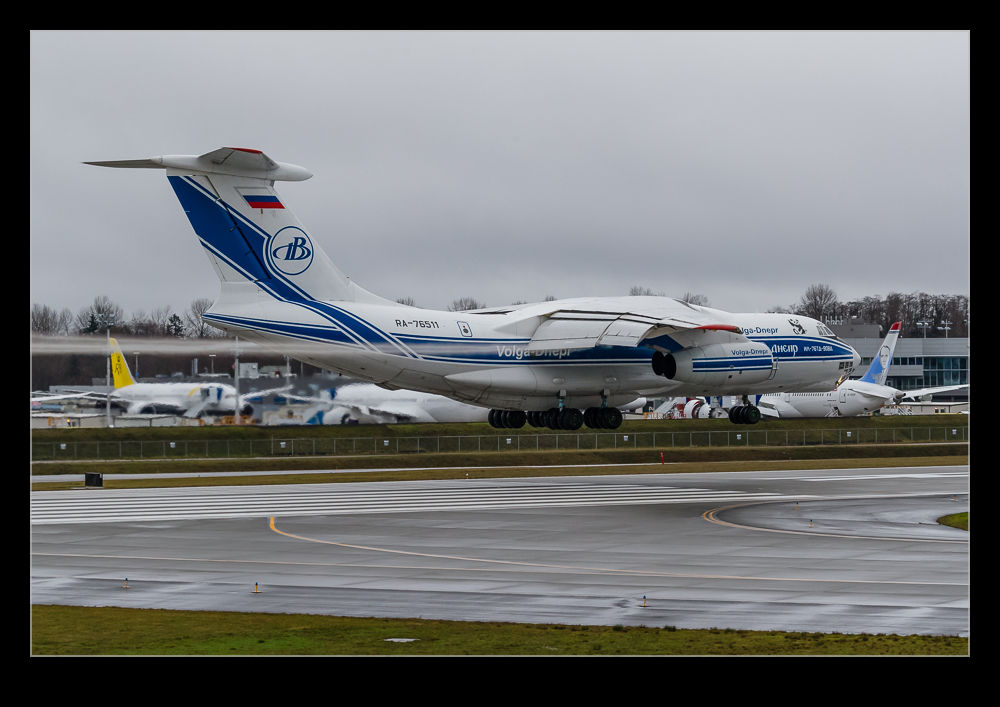 The presence of the IL-76 in the Pacific Northwest showed up in a previous post of mine here.  I wasn’t aware of one being back here until I was up at Paine Field and one was parked up at the Boeing facility.  It had come in during the night and didn’t go back out again until I was at work.  I actually saw it fly by my window as it headed out.  I figured it was done but I was wrong. 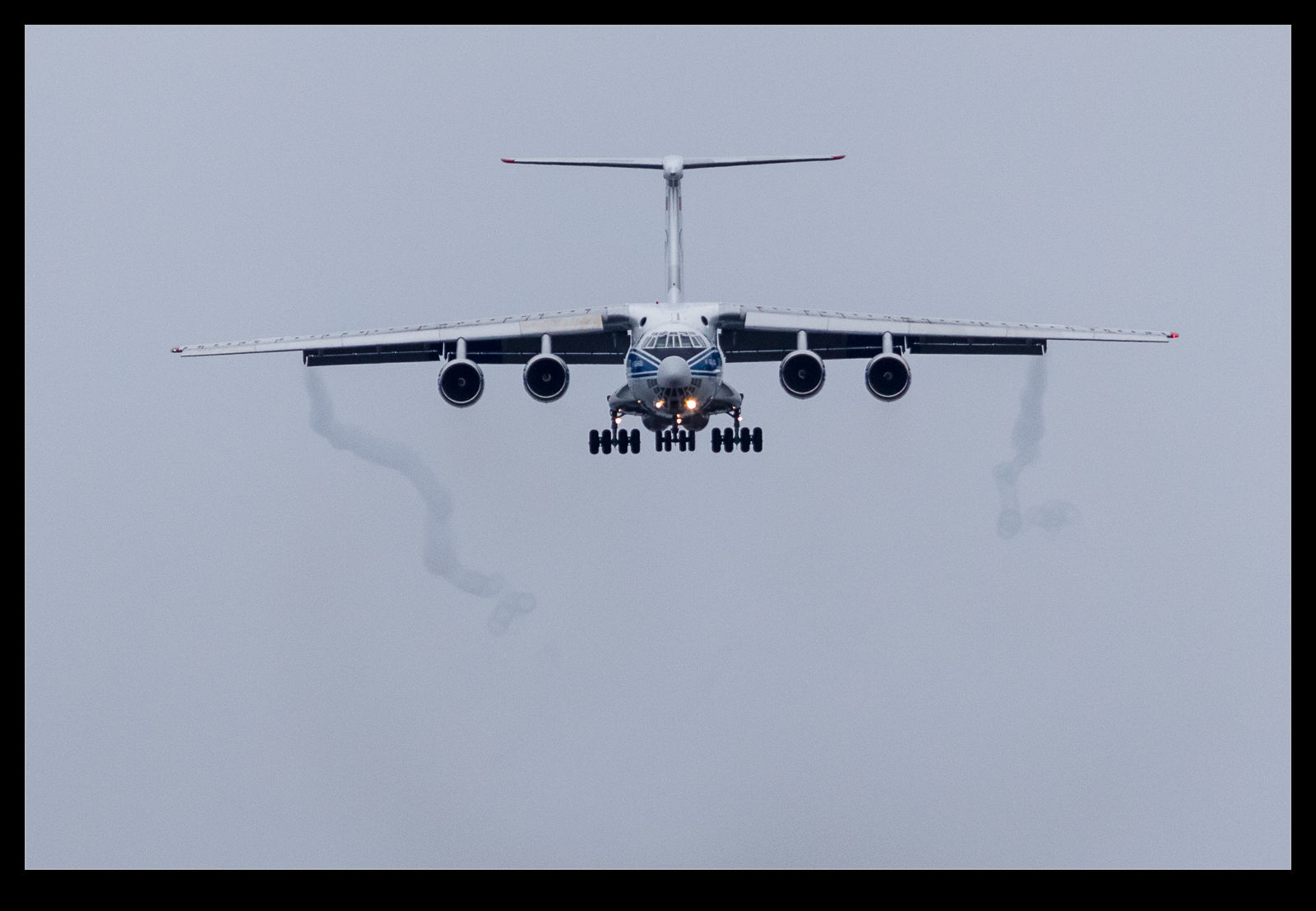 The message got out that it was due back in to Paine Field during the weekend.  The weather forecast was not great (again) but it was too good a chance to pass up.  I was not the only one either.  A lot of people had shown up to see it come in.  The cloud base was pretty low and the plane was quite close in before it popped out of the murk.  As it came down the approach, it was easy to see.  Aside from the plane itself, the trailing vortices from the flap system were streaming behind the aircraft with the moist atmosphere making them very conspicuous. 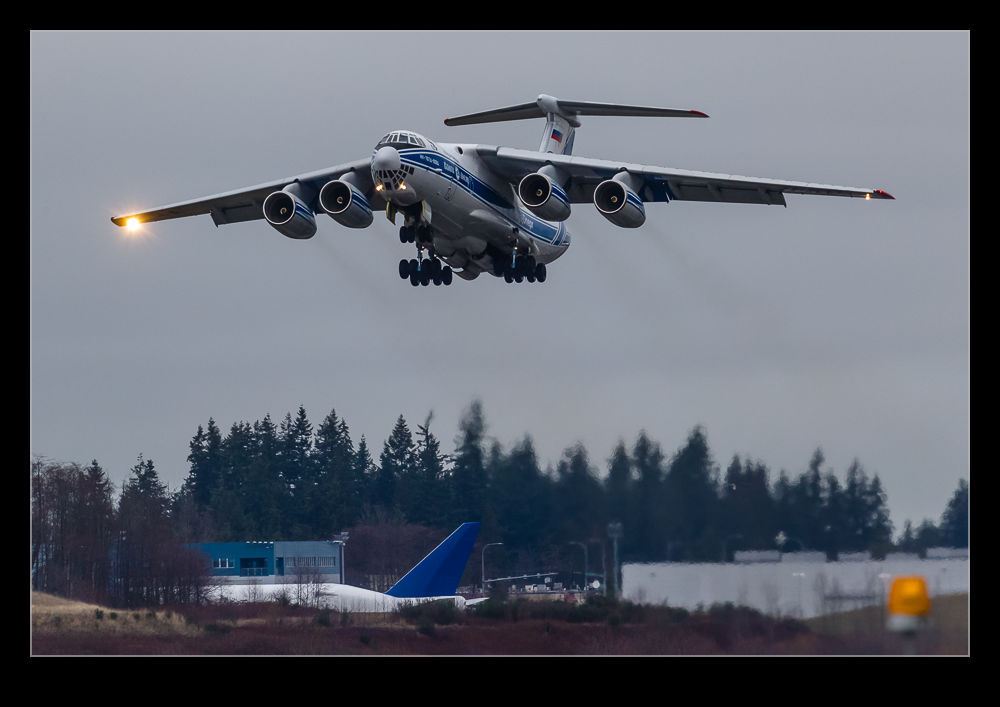 As they floated across the threshold, the vortices were still very conspicuous and they floated a good way down the runway streaming all the way.  In fact, even after touchdown, the vortices were still visible.  They taxied back in to the north entrance to the Boeing ramp where the waiting committee were ready.  That will be work another post of its own. 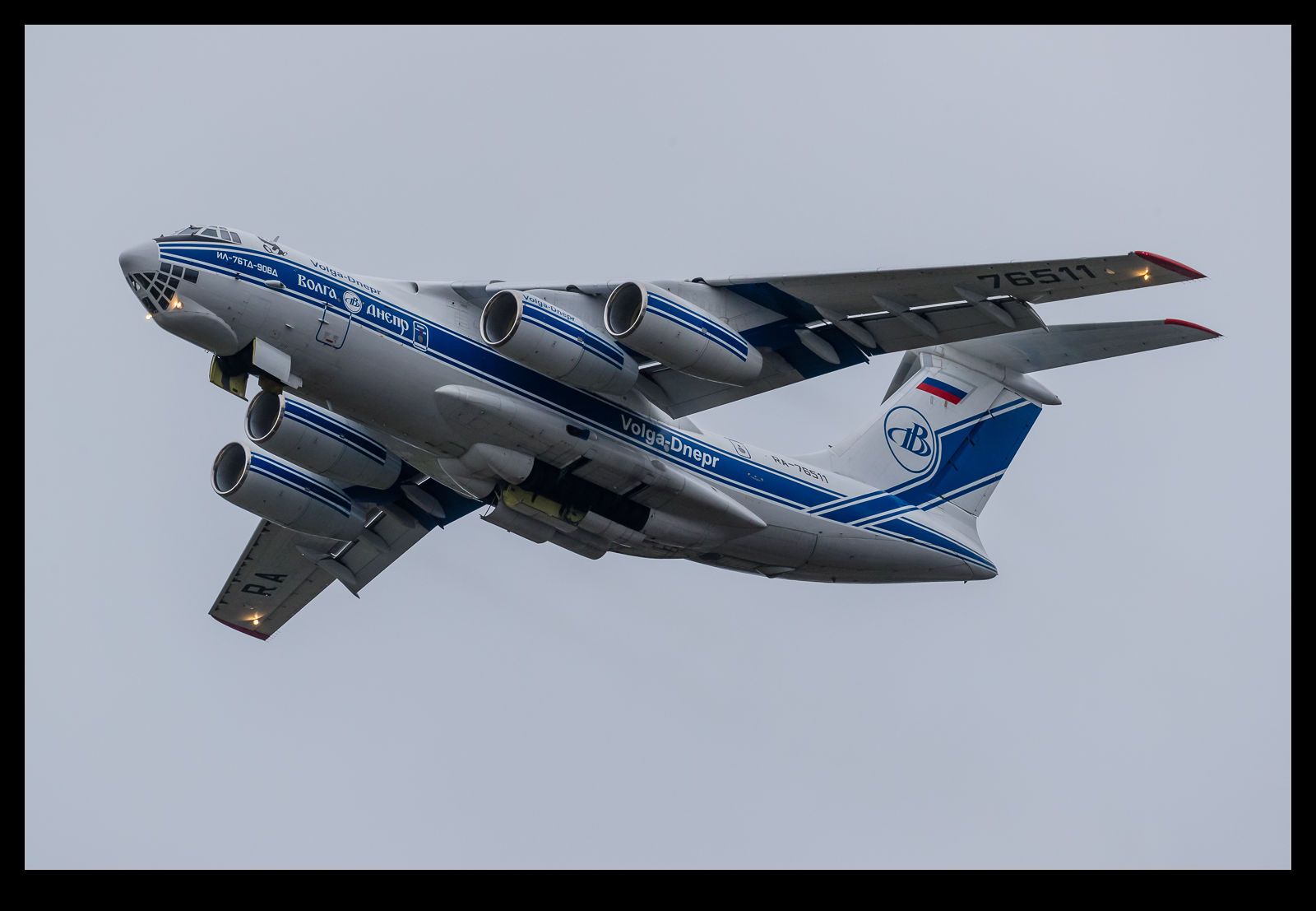 A day later the departure was scheduled.  Of course, the weather was still pretty crappy.  Nevertheless, I wasn’t going to pass it up.  The flight was only a short one though.  They were heading to Dallas and I don’t think they were carrying much.  Consequently, they were lightly loaded and got off the ground quickly.  The climb was steep and they were up into the cloud base before too long.  Still, I managed to get a few shots of them as they went off.  I wonder if I will get to see an IL-76 in the sun at some point? 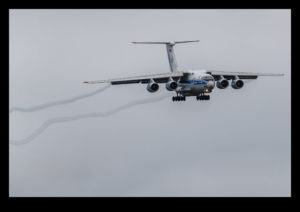 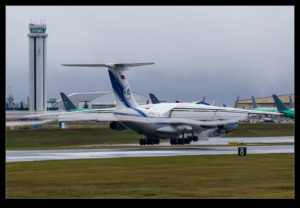 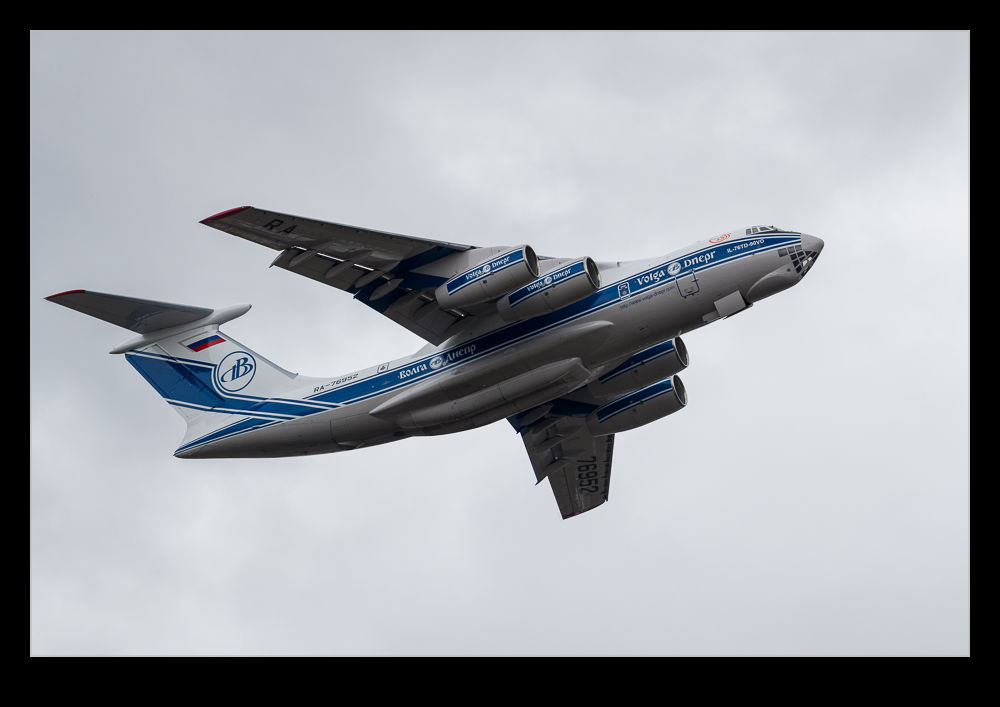 The Antonov 124 is a reasonably regular visitor to the US when outsized cargo needs to be moved.  It is often commented on as being a Russian plane but, while one of the operators is a Russian company and some of the aircraft were assembled in Russia, the design and much of the production is actually Ukrainian.  Ilyushin, on the other hand, really is a Russian company.  Their IL-76 is also operated for freight services but it doesn’t show up anything like as frequently.  Consequently, when a Volga Dnepr example was scheduled in to SeaTac on a Friday afternoon, I was pretty annoyed I would miss it.  However, it ended up being seven hours late so arrived well after dark. 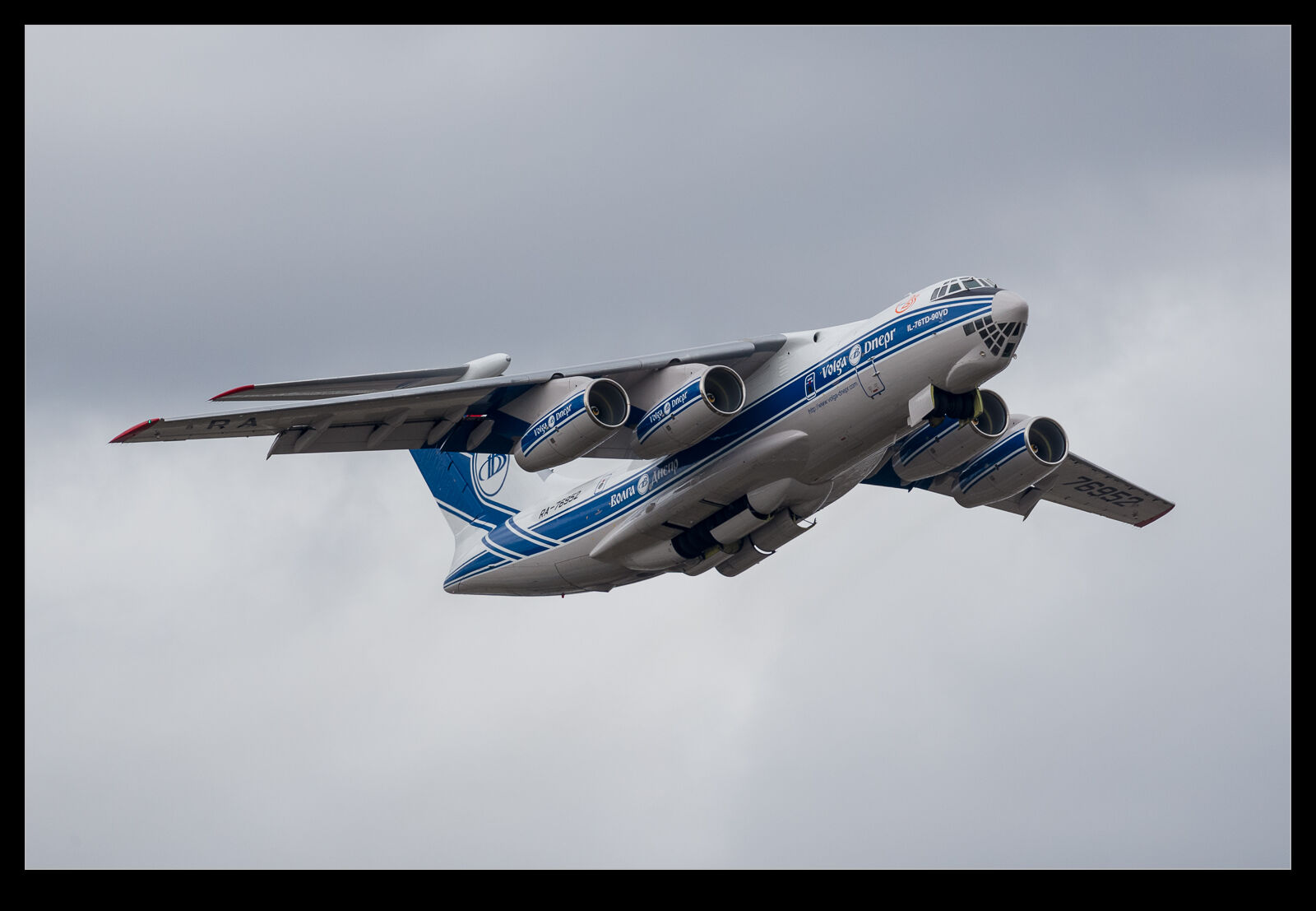 Departure the following day was going to be a practical proposition for me (and many others as it happened).  The weather was not going to be ideal with low cloud and rain but, when the visitor is a rarity, you don’t get to choose whether to go based on weather.  Fortunately, the departure was a lot closer to schedule than the arrival.  I drove past the cargo ramp and saw it parked up and all closed up so did wonder whether it would go on time but things were working well and they headed out. 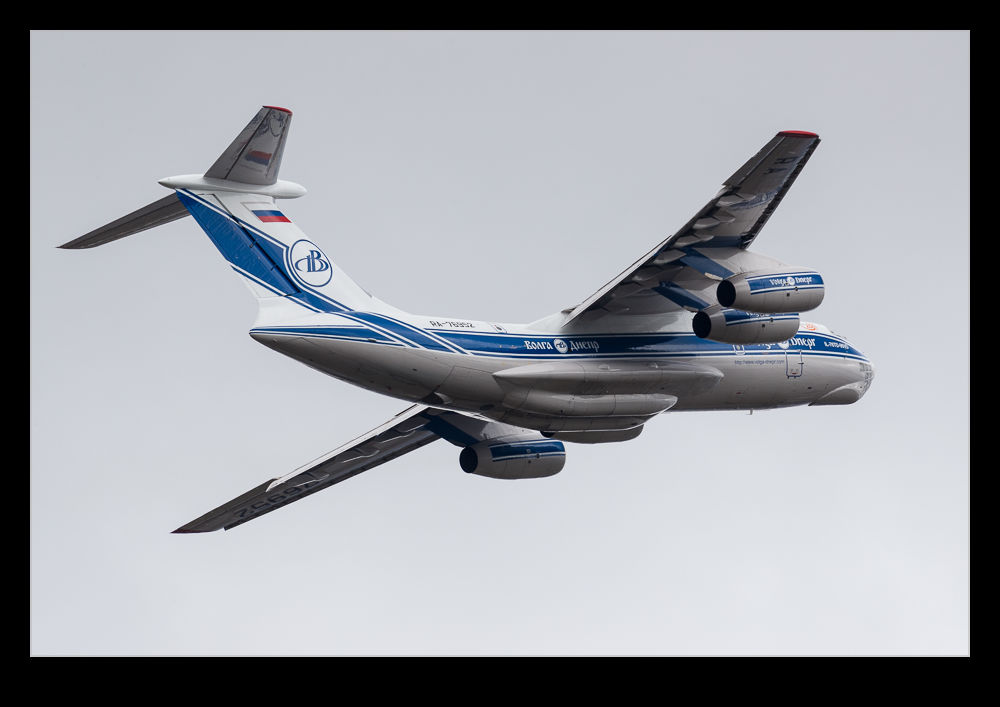 This aircraft was the newer variant with the PS90 engines and takeoff performance was pretty good.  I had worried it would be low on the climb out and not in a good position to photograph but it climbed well and was in a good position to get a shot.  I had a big grin once it had gone as did the rest of the people waiting for it. 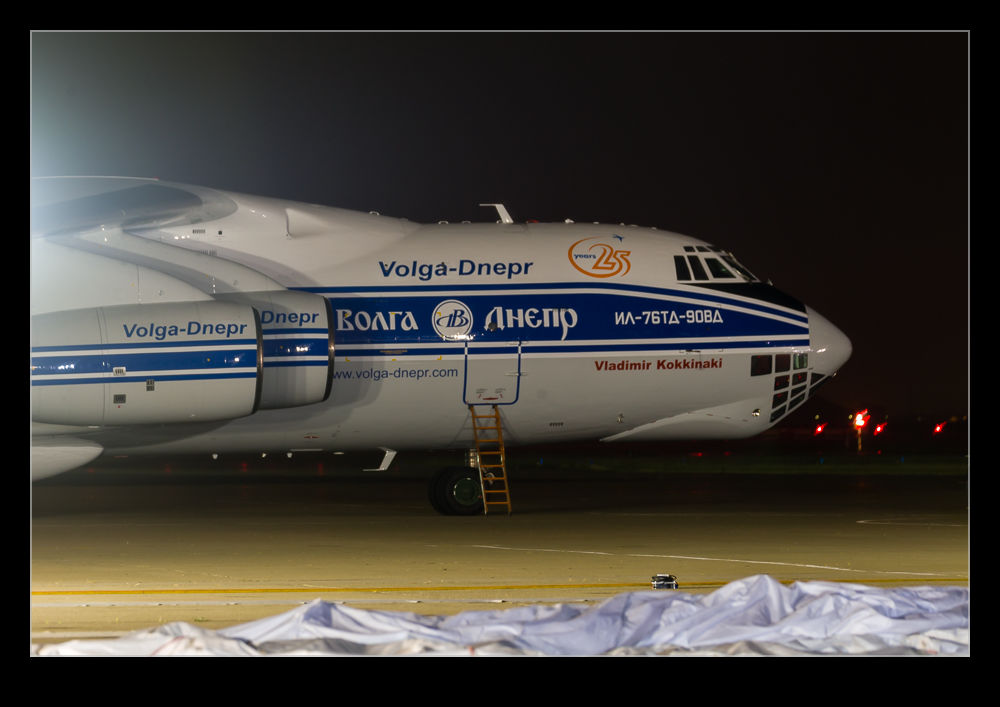 There have been a bunch of AN124s popping in to Moffett Field recently, one of which I saw while at the Solar Impulse arrival event.  When I went back for the departure (which I covered for Global Aviation Resource in this article), I was surprised to see another freighter from the old Eastern Bloc.  At his one was a more recent version though.  It was an Ilyushin IL-76 but one that is fitted with the PS90 engine.  It had been brought in to transport the ground crew and their gear for Solar Impulse.  They were heading to Phoenix next and, since it was a short flight, everything needed to move quickly. 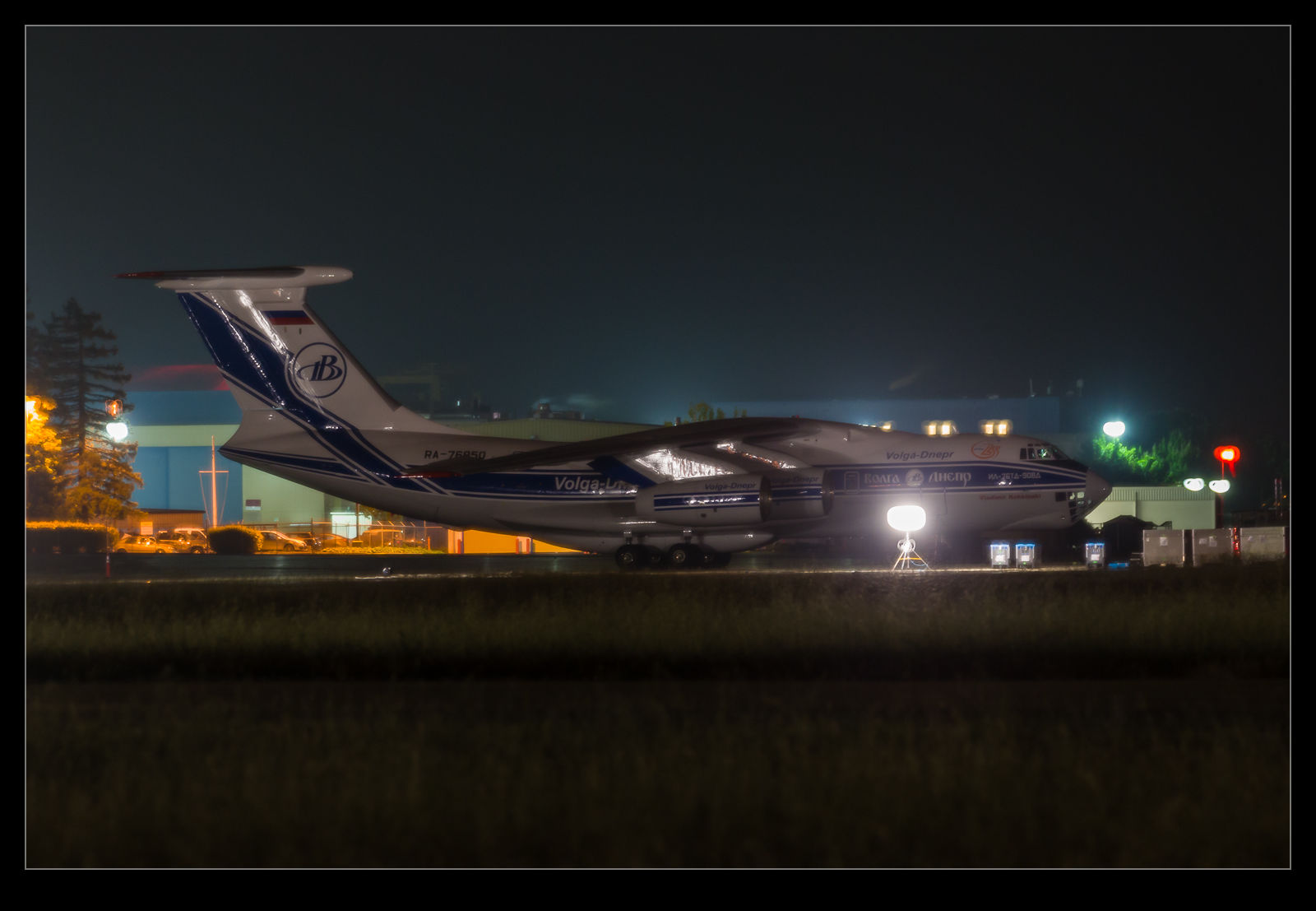 I didn’t get a great chance to photograph the plane.  It was a long way up the ramp and there were too many lights between us to make for a great shot.  However, I got what I could.  My friend Hayman works nearby and he was able to get the departure later in the morning.  I’m not jealous…