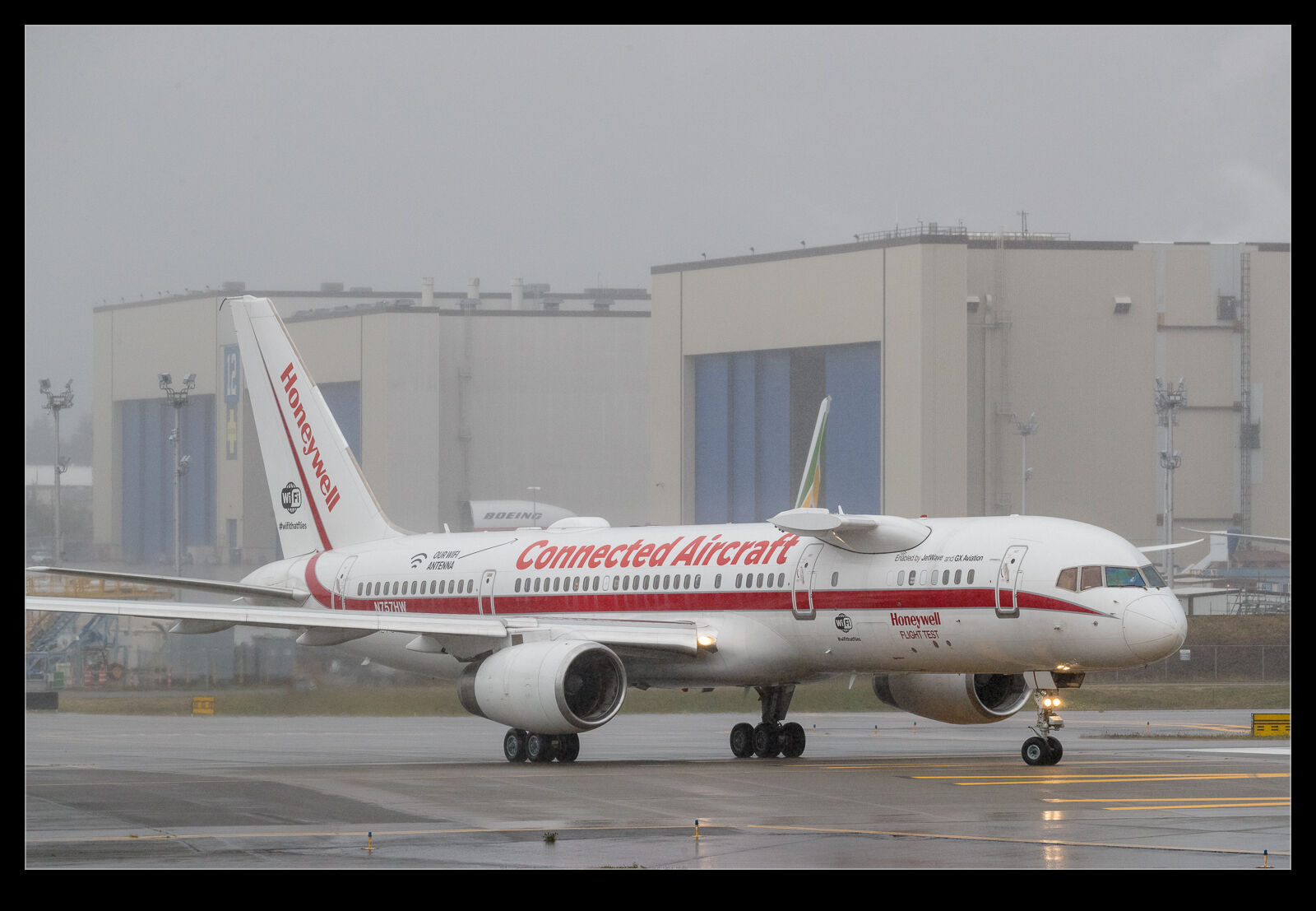 Over six months ago, the Honeywell Boeing 757 testbed ferried from Phoenix – its home base – to Paine Field for maintenance work at ATS. I don’t know whether there were mods to be done too but, with a jet like this, that wouldn’t seem to be a stretch.  I only found out it was there when I saw it outside the ATS hangars one time.  I figured this was one to watch since it would have to go home at some point. 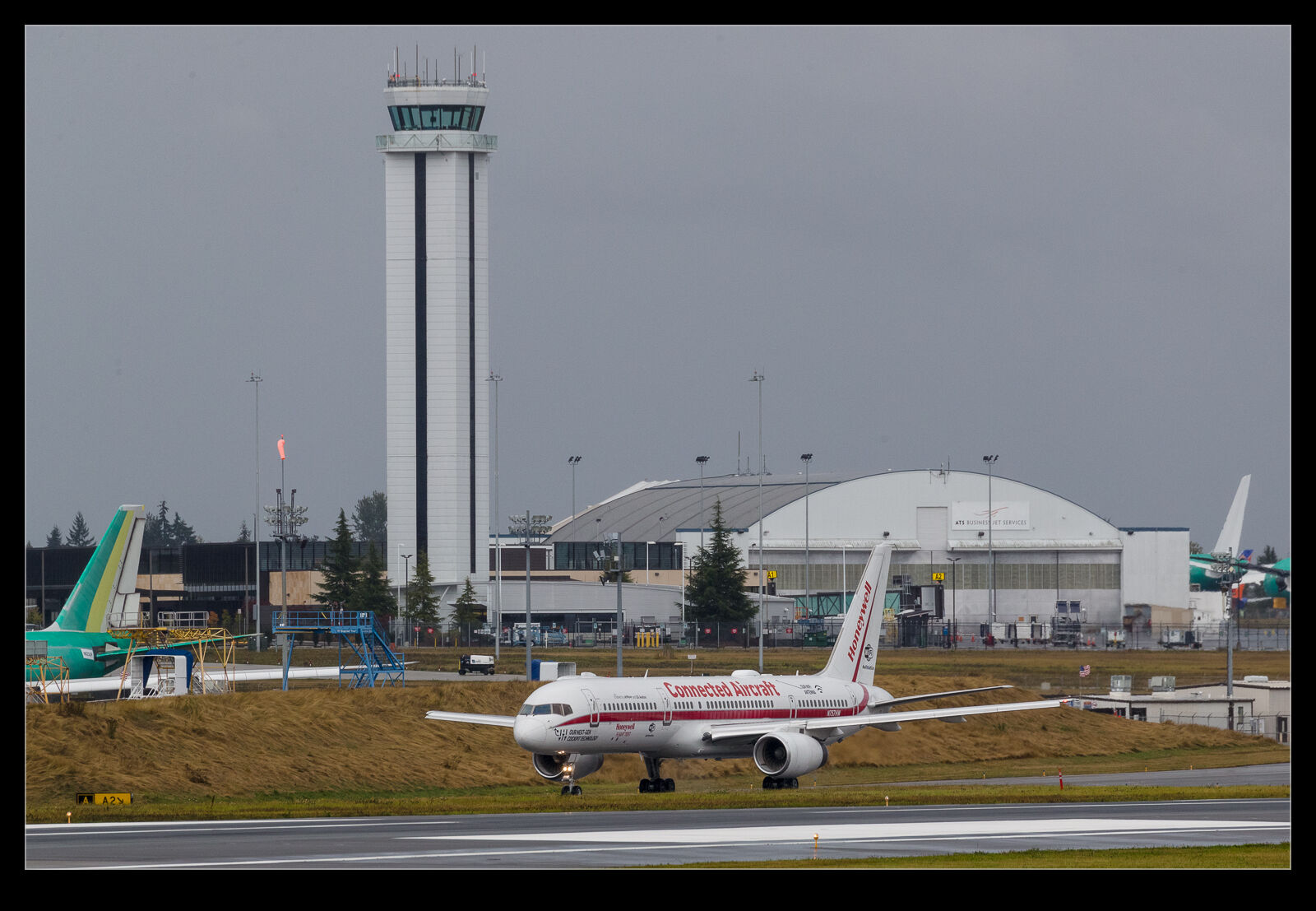 Whether there was a ton to be done or whether COVID delayed progress, I don’t know.  However, it stayed at ATS for a long time.  I had an alert on it should a flight plan be filed but nothing happened.  I talked to other people up there and we all wondered when it would move.  Then, finally a flight plan was filed for a flight coming back to Paine Field.  This was good news since it would mean taxi shots, departure and arrival.  I headed up.  First flight after a long layup is not likely to go smoothly and the time for departure kept slipping and slipping.  Eventually, later in the day, the flight disappeared off FlightAware. 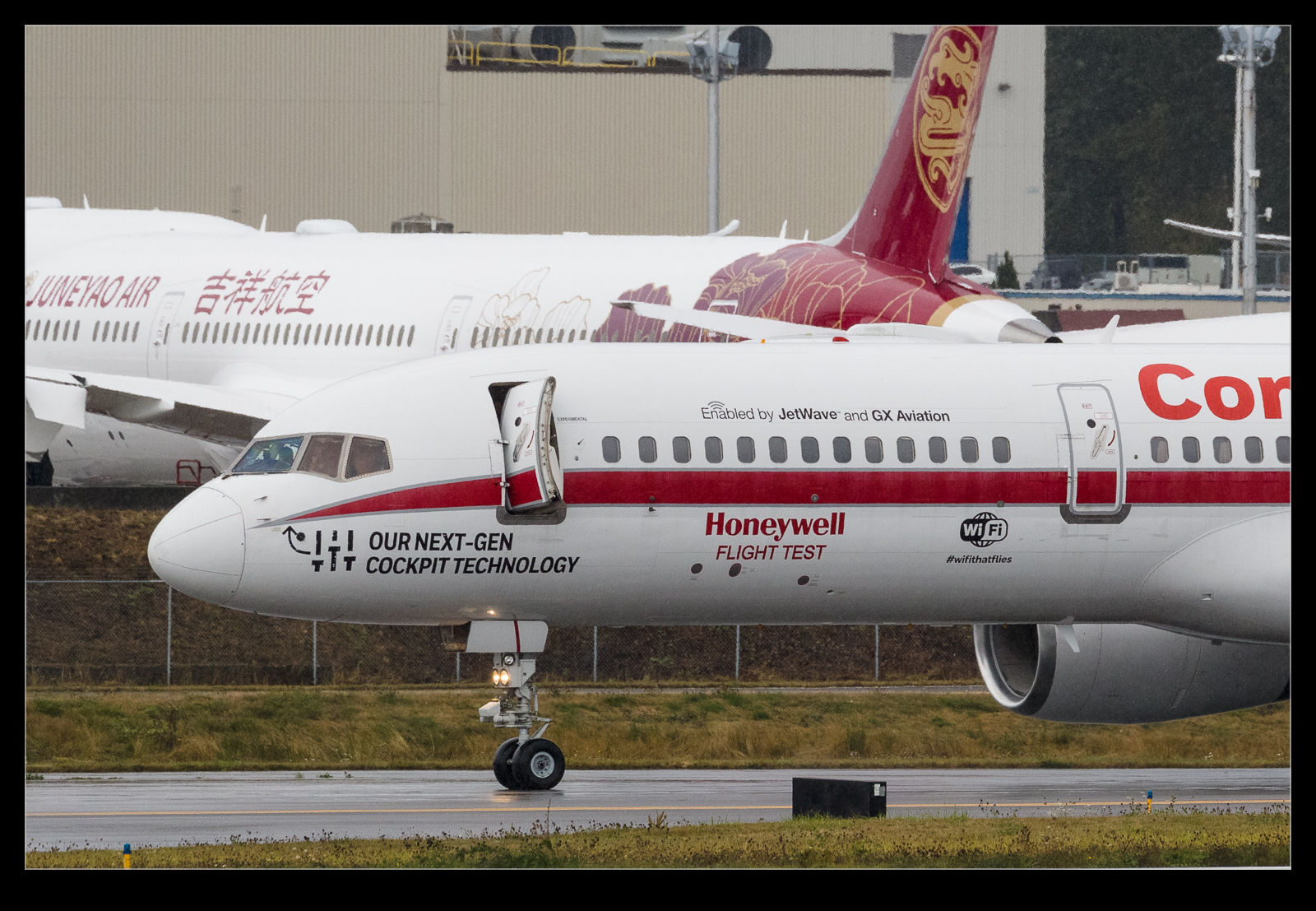 A few days later, up it popped online again.  Unfortunately, this time it was a flight direct to Phoenix so redelivery.  That was unfortunate.  So was the fact that we were experiencing some torrential rains.  However, this is a rare one so I headed up.  As per the last time, the departure time slipped a bit but then it pulled on to the taxiway heading for the runway.  Amazingly, the rain had abated and it looked very promising.  I got out of the car and walked to the bank to get some shots.  At some point, I began to feel some rain drops.  Then I felt what seemed to be the stream from a fire hose.  The rain came pummeling down and I was instantly soaked.  At this point, I was wet so no point heading back to the car. 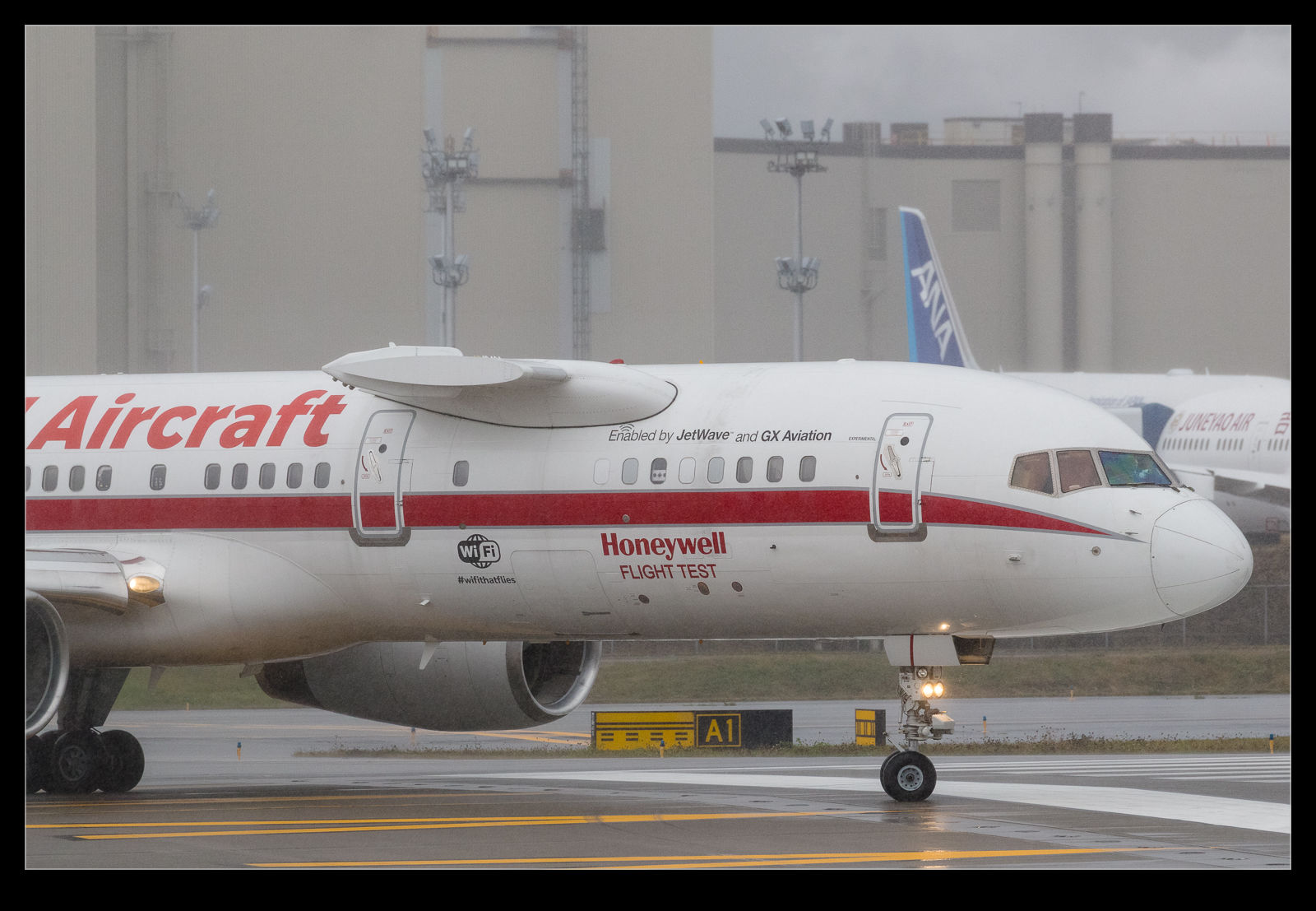 When they got to the hold point, they stayed around for a while.  Then someone came to the door on our side and opened it.  I imagine they were getting pretty wet doing this since I was.  As it sat there at low power, it was still pulling a vortex into the inlet of one of the engines.  Maybe there was a door open warning but they closed it again and then pulled towards the active runway.  The plane is covered in graphics pointing at parts of the airframe that have Honeywell technology installed.  Its most distinguishing feature, though, is the pylon mounted on the side of the front fuselage on which turboprop engines can be mounted for airborne testing.  No engines are there at the moment but the pylon itself is pretty substantial.  Coming towards us and then lining up, we had the pylon on our. Side.  They powered up and disappeared in to the gloom as they climbed out heading home to Phoenix. 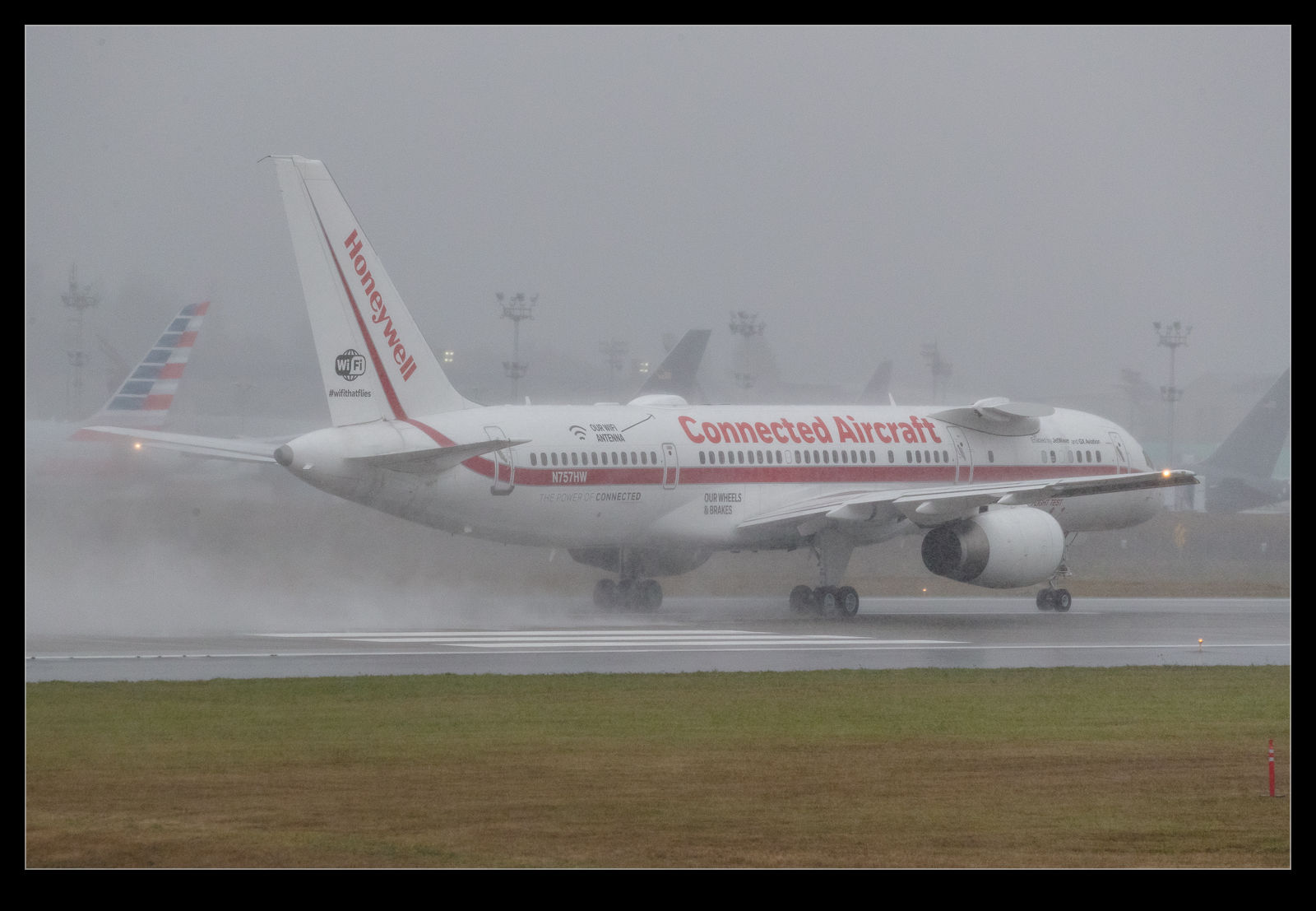 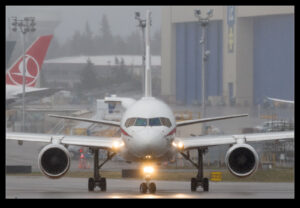 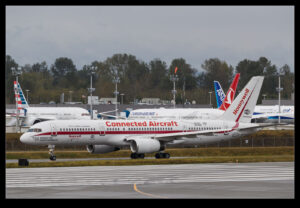