On the road from Anacortes to the ferry terminal, you have the water off to your right.  As I glanced over, I realized that, what I thought was a spur of the land, was actually the wreck of a ship.  The prow of the hull was the thing that first caught my attention so, when I came back, I stopped off to take a closer look. 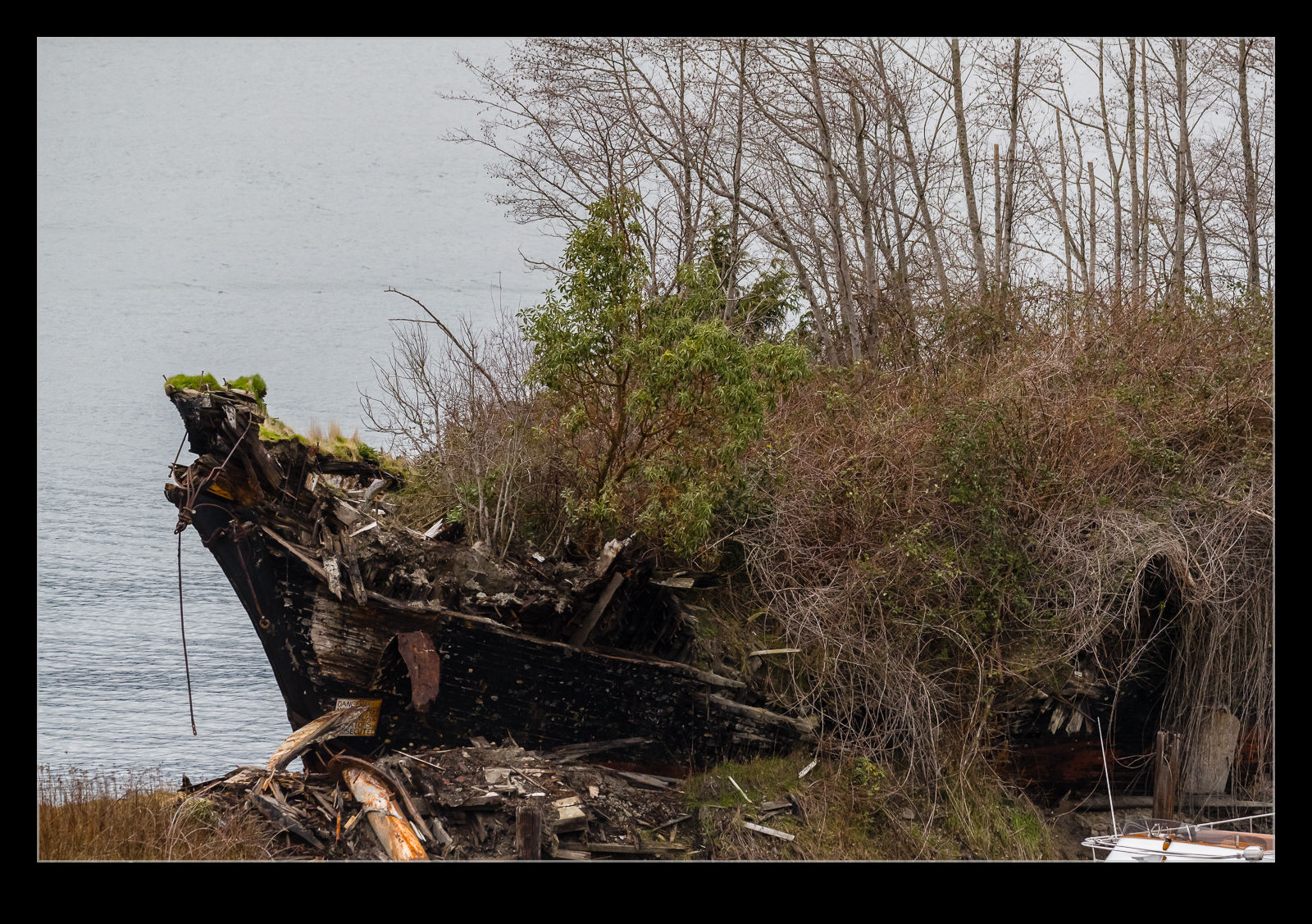 The ship is a decent size – it reminded me of the old clipper hulls.  It is a wooden hull and the shape of the bow is clearly very dated.  It has been there so long that there are trees and plants that are well established on it.  That was why I almost missed it.  It just looks like part of the land.  You could easily miss that it was a ship as I had done every time that I previously came this way.  Now it is just part of the harbor wall. More to come on this. 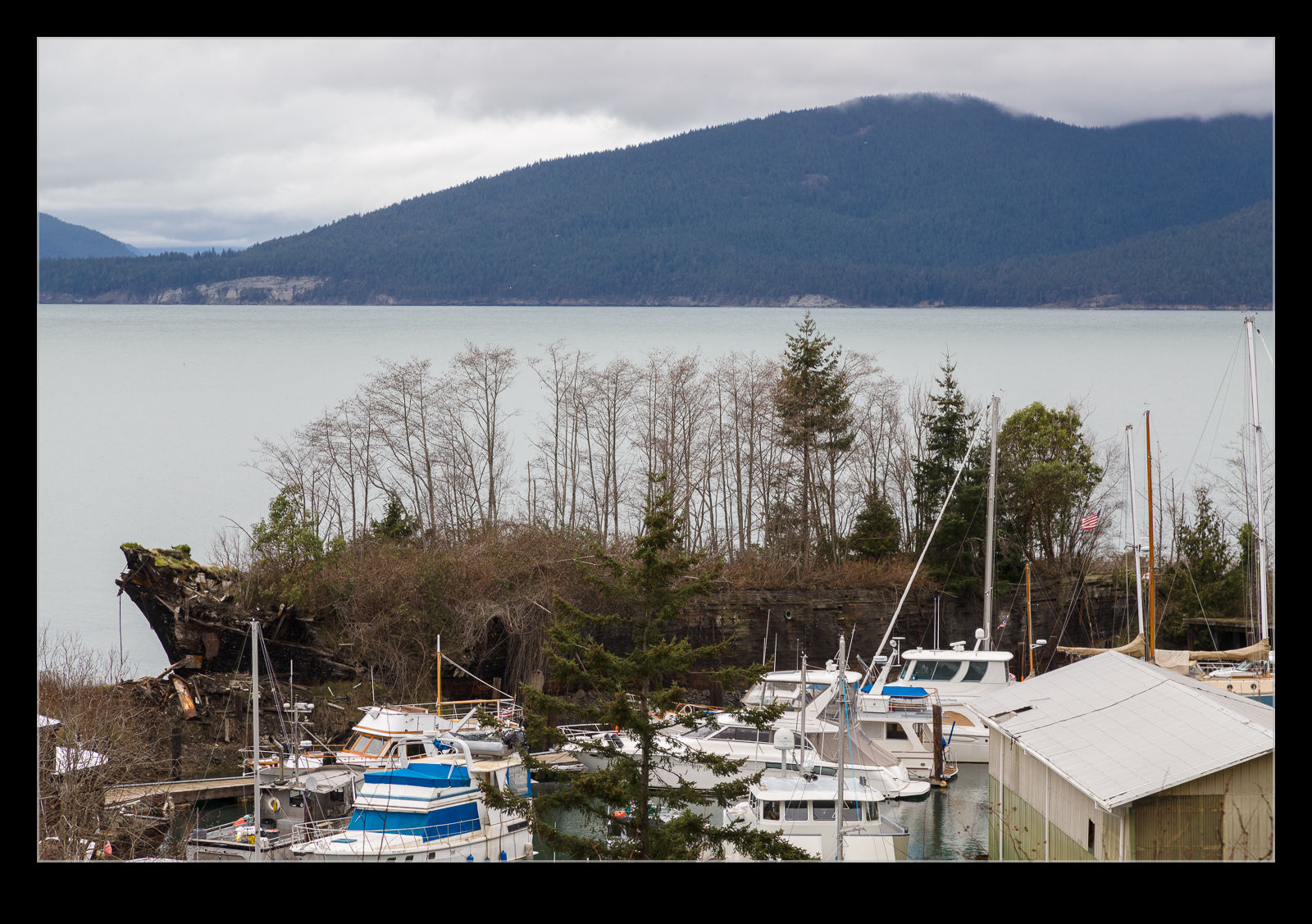 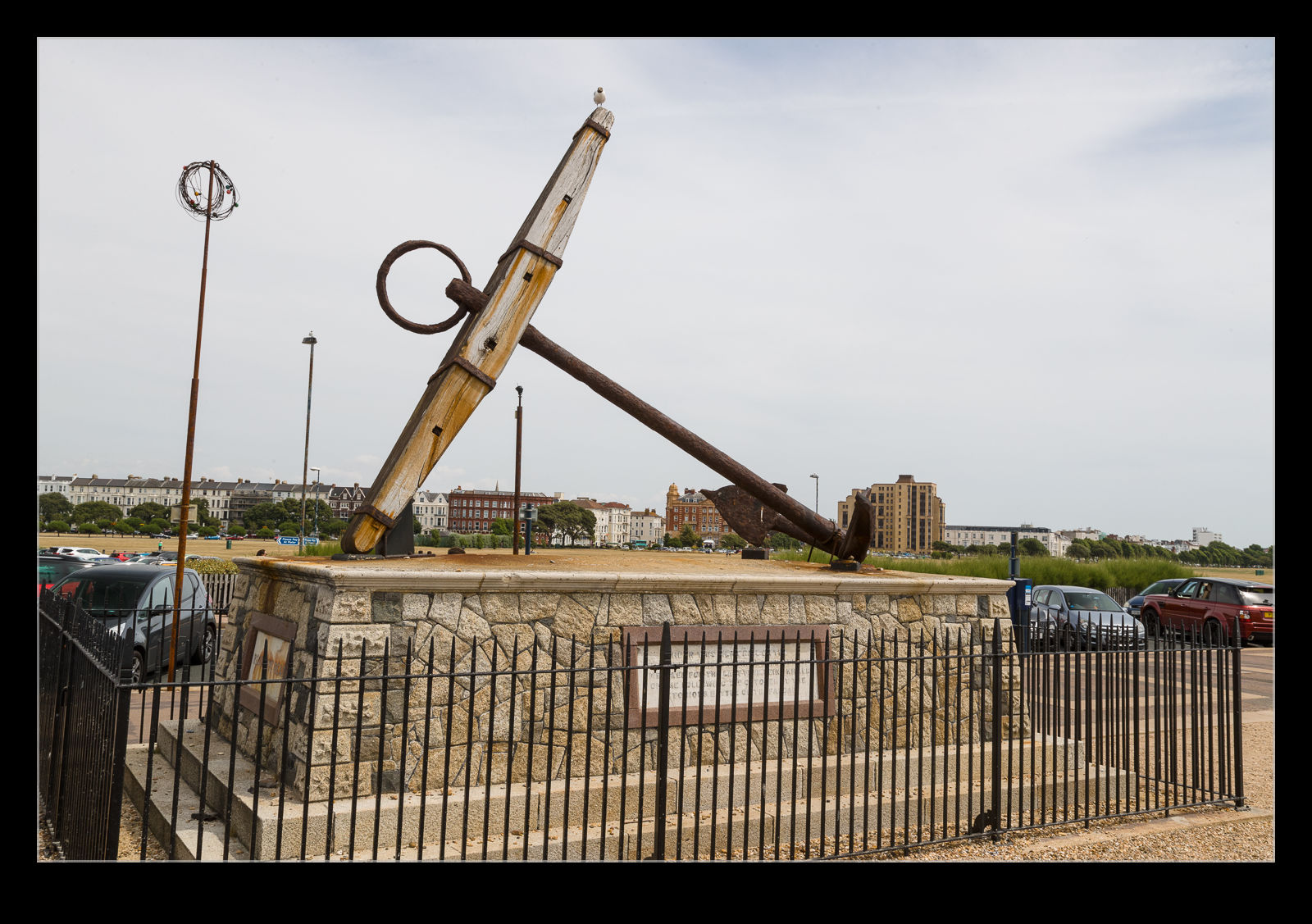 If you are used to a modern shape of an anchor, particularly one for a large ship, the old style of anchors in the days of the early 1800s will be rather strange looking.  They look like a giant version of the sort of anchor you would see on a small boat.  This example sits on the seafront in Southsea and comes from a ship that fought in the battle of Trafalgar.  It seems in pretty good shape.  I wonder whether that is a feature of the materials used or the result of lots of bits of it being replaced over the years. 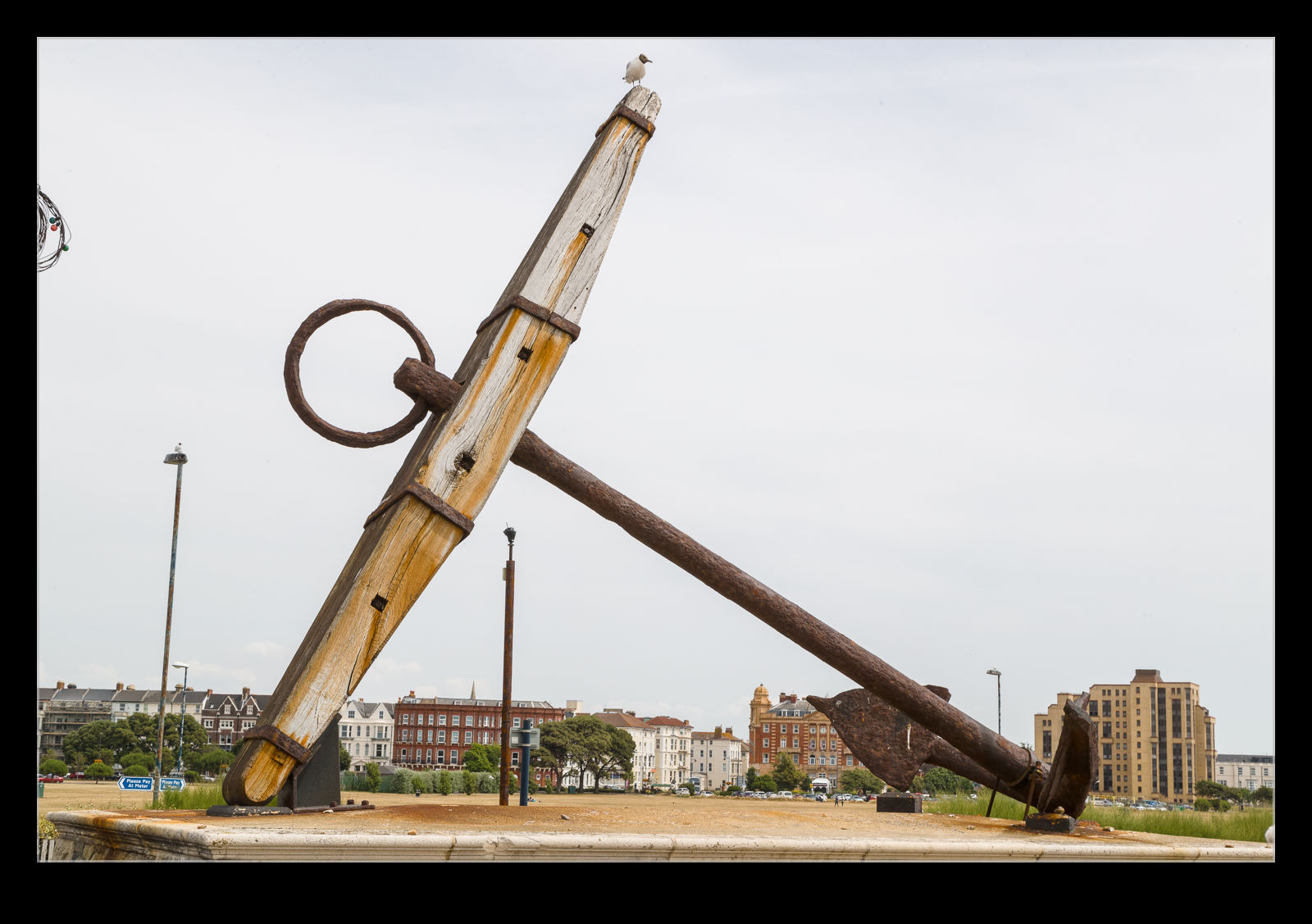 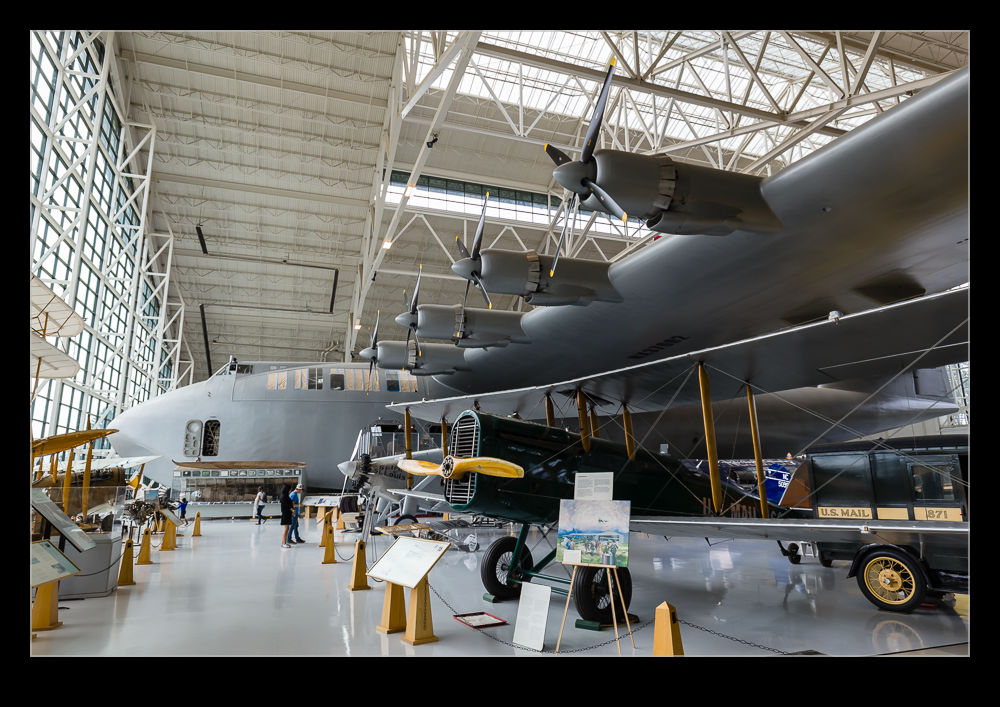 I have made one previous visit to the Evergreen Aviation Museum in McMinnville Oregon.  That was probably ten years ago.  I was in Portland for the morning Open House at the ANG unit so, having gone that far, I decided to go to the museum to see what had changed.  I underestimated a couple of things.  One, McMinnville is a bit further from Portland than I thought it was so it took about an hour to get there and that hour was also going to be added to my return journey.  Also, a lot of things have changed so I was going to spend more time there than I thought.  I was not getting home early that evening! 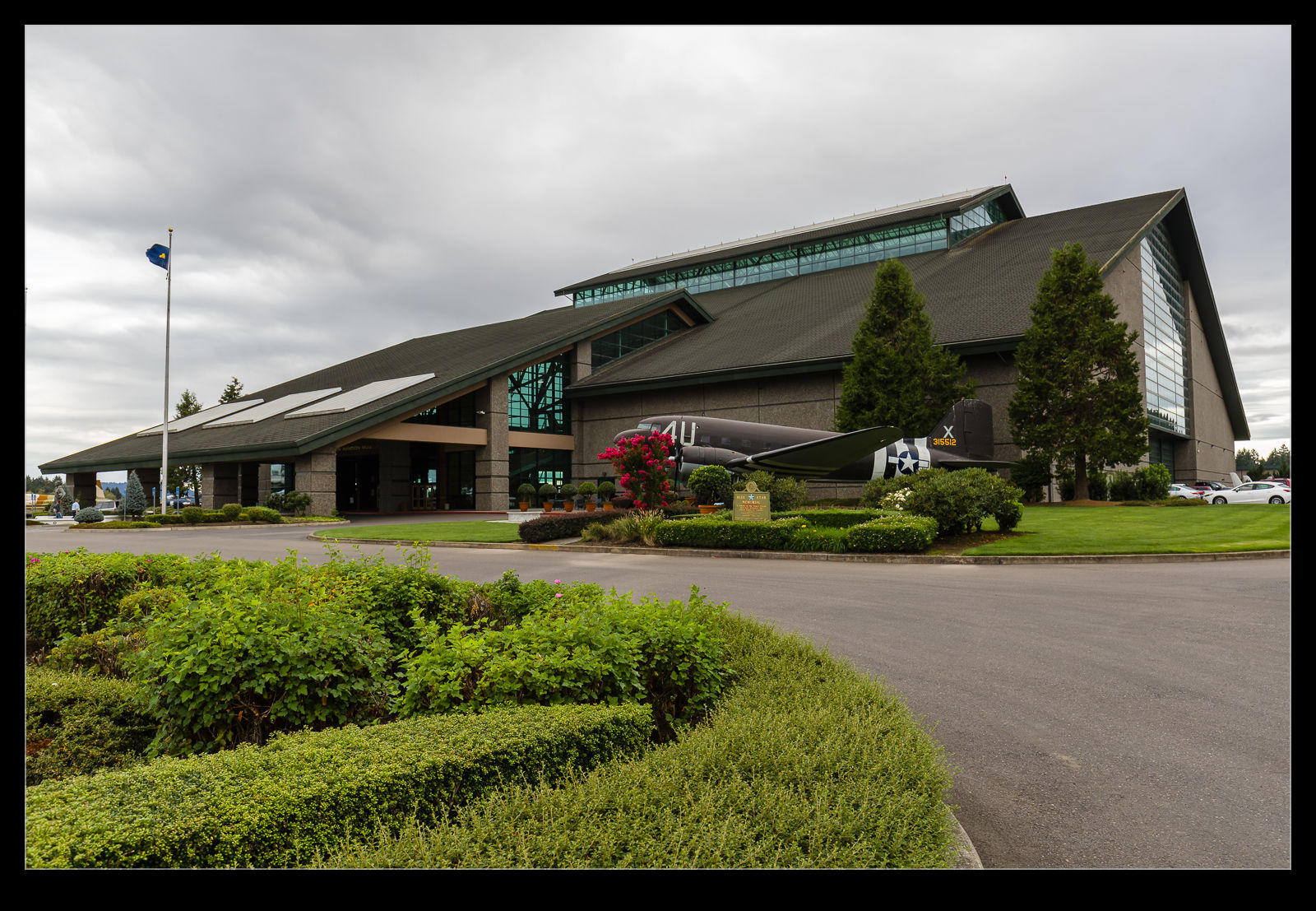 When I last went, one building housed the exhibits and a second was being built.  It was close to completion and they were talking of space exhibits and, hopefully, a Space Shuttle.  That didn’t work out but now there is certainly a lot more to see.  There are two main exhibition buildings – pre-Vietnam and post-Vietnam eras – housing civilian and military exhibits.  There is also a theater building.  None of this includes the water park that is close by. 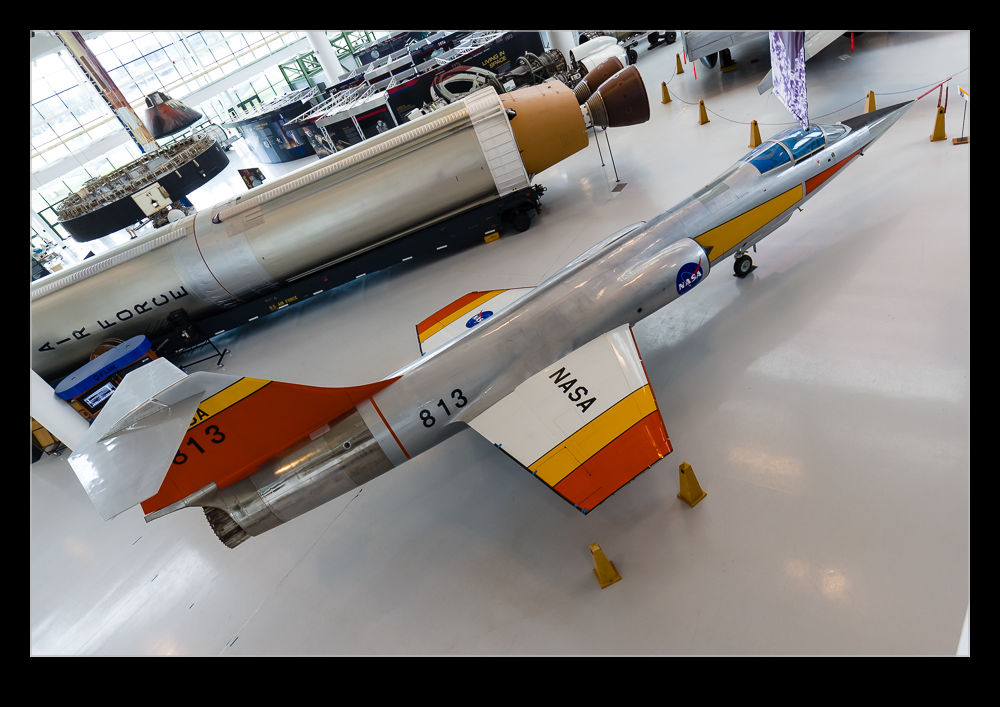 The amount of space means that the exhibits are not crammed upon each other although some areas are a little more cramped than others.  Some helicopters that I rather liked were jammed together.  There is a shortage of space I guess, though, because lots of exhibits are outside and there are a few still scattered around the parking lot awaiting restoration.  That is not a criticism though.  The museum has plenty of great stuff to see (although the Beech Starship was in the parking lot last time I was there and still is, looking a little more forlorn now than it did then). 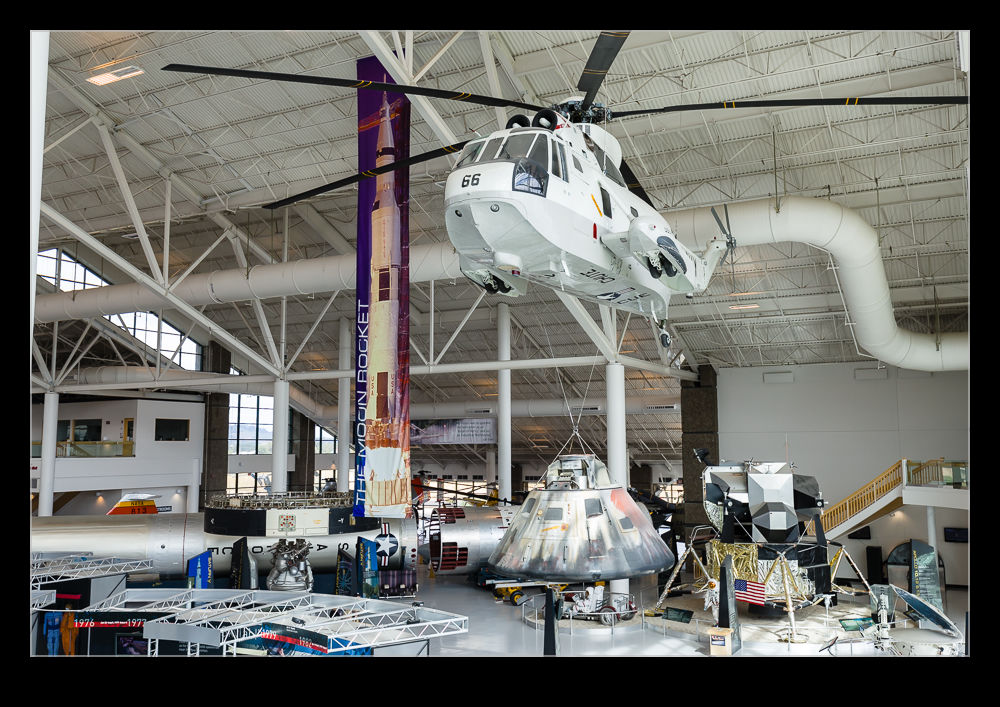 If I were to try and pick out highlights, it would be tricky.  The Spruce Goose is the main feature of the original building and it still dominates things there.  Indeed, it is so large that, at times, you actually forget it is there because it either is way above you or it fills the view becoming invisible in the process.  The SR-71 is a delight to see at any time and the way that one engine pod is opened up is a nice touch and gives a good idea of the installation for a unique engine. 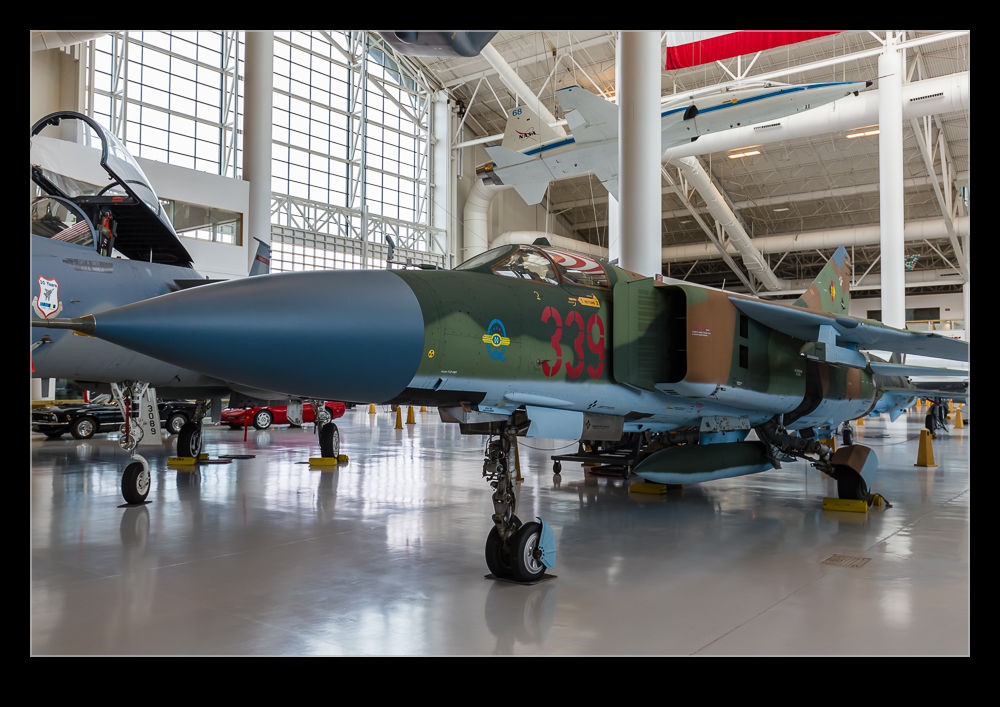 The rockets and missiles are well displayed and I shall come back to them in another post.  Some of the aircraft are painted up in unusual schemes although these are not always original to the airframe on display.  Even so, they are a change from what you might normally see.  Having a 747-100 parked outside the front of the museum is a nice touch too – a reminder of Evergreen’s operations before the airline went bust. 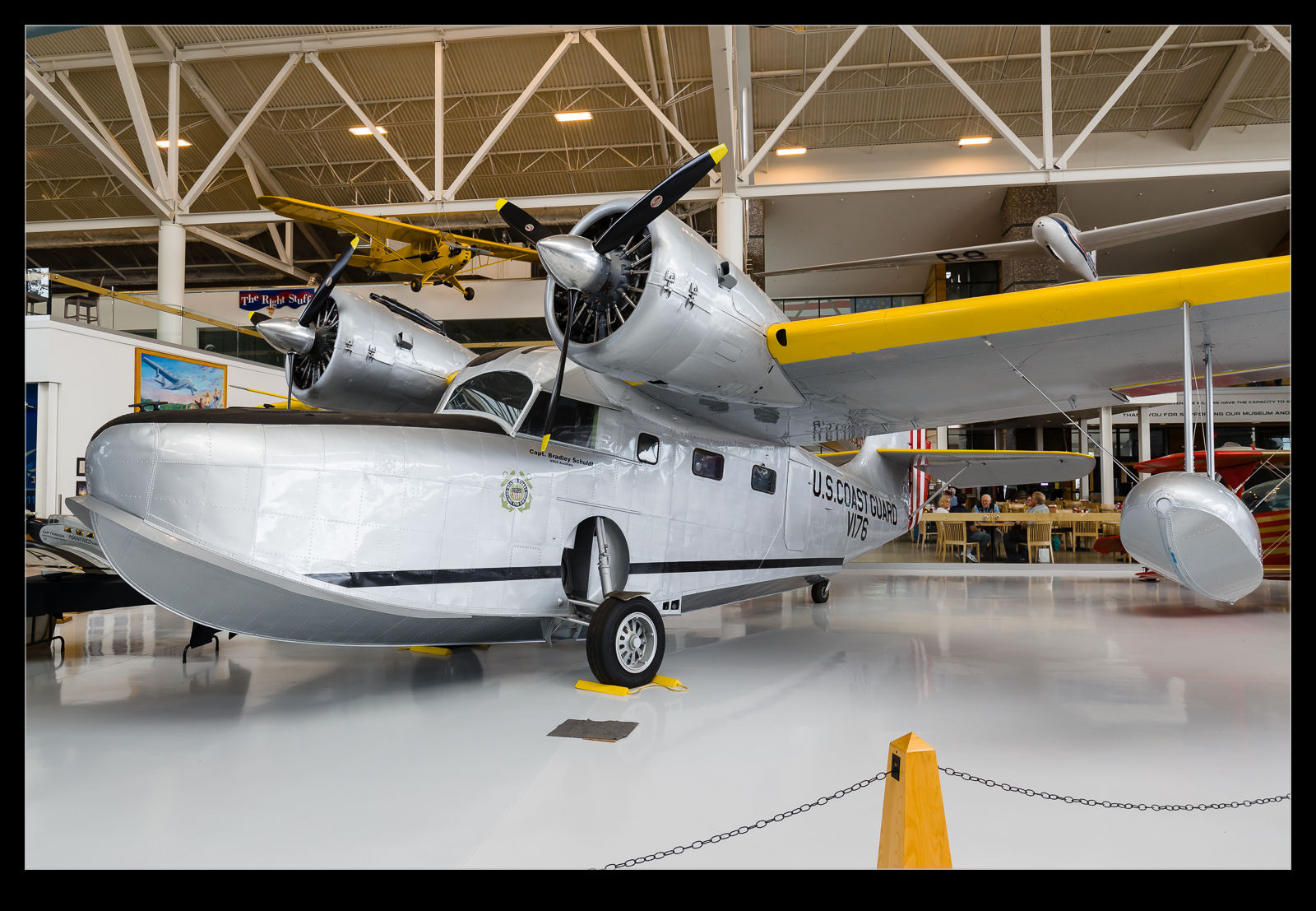 I only had a couple of hours so I was in a bit of a hurry working my way around but this is definitely a place that you could spend a lot of time.  The journey there is long enough to make doing so something that you should really plan for.  I saw plenty that I had seen before but plenty that was either not there or was not displayed in the same way.  If you are in the vicinity, make a trip to McMinnville. 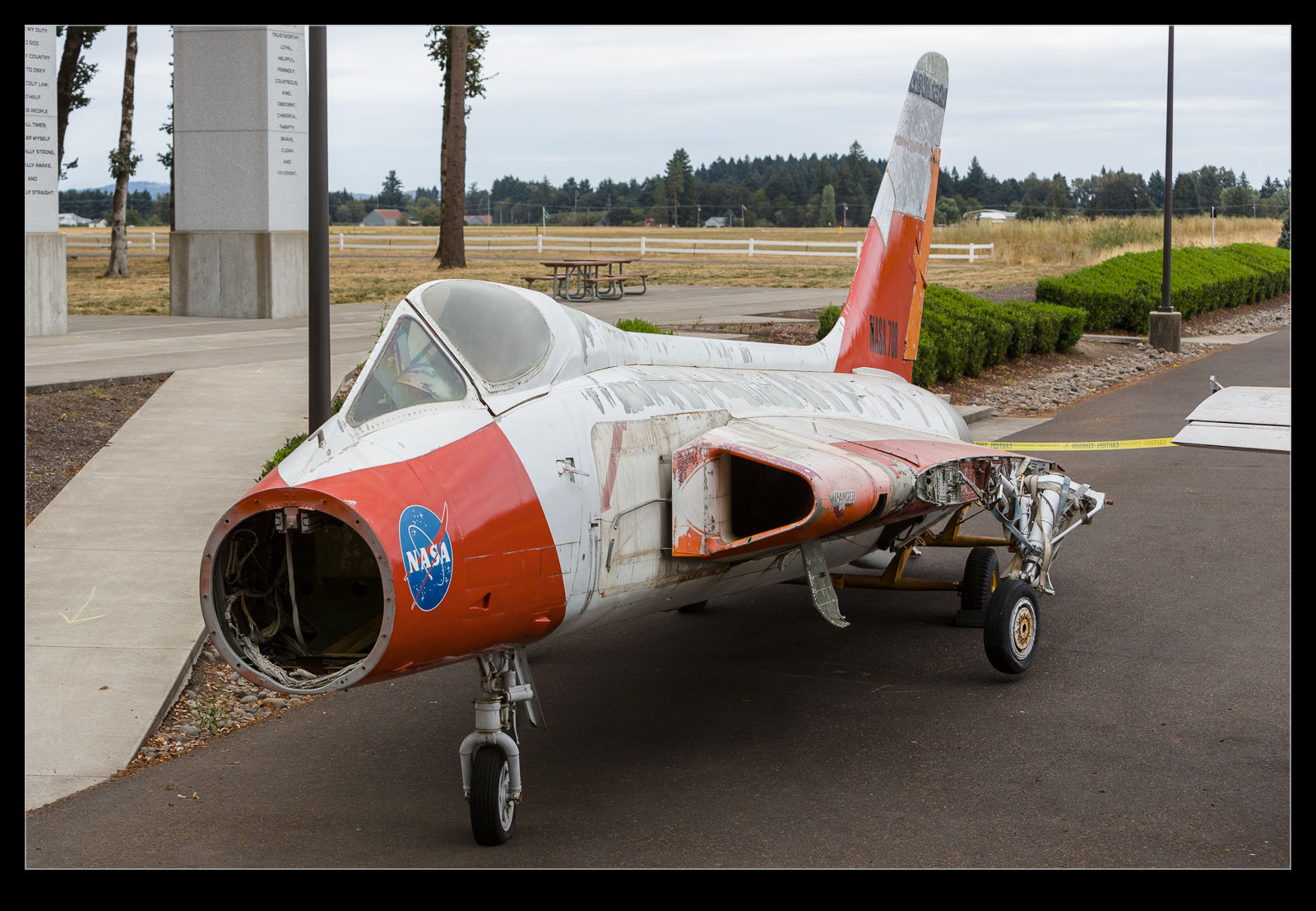 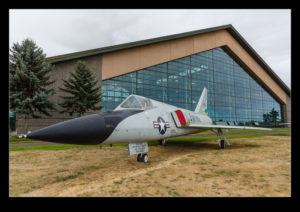 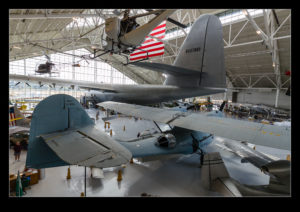 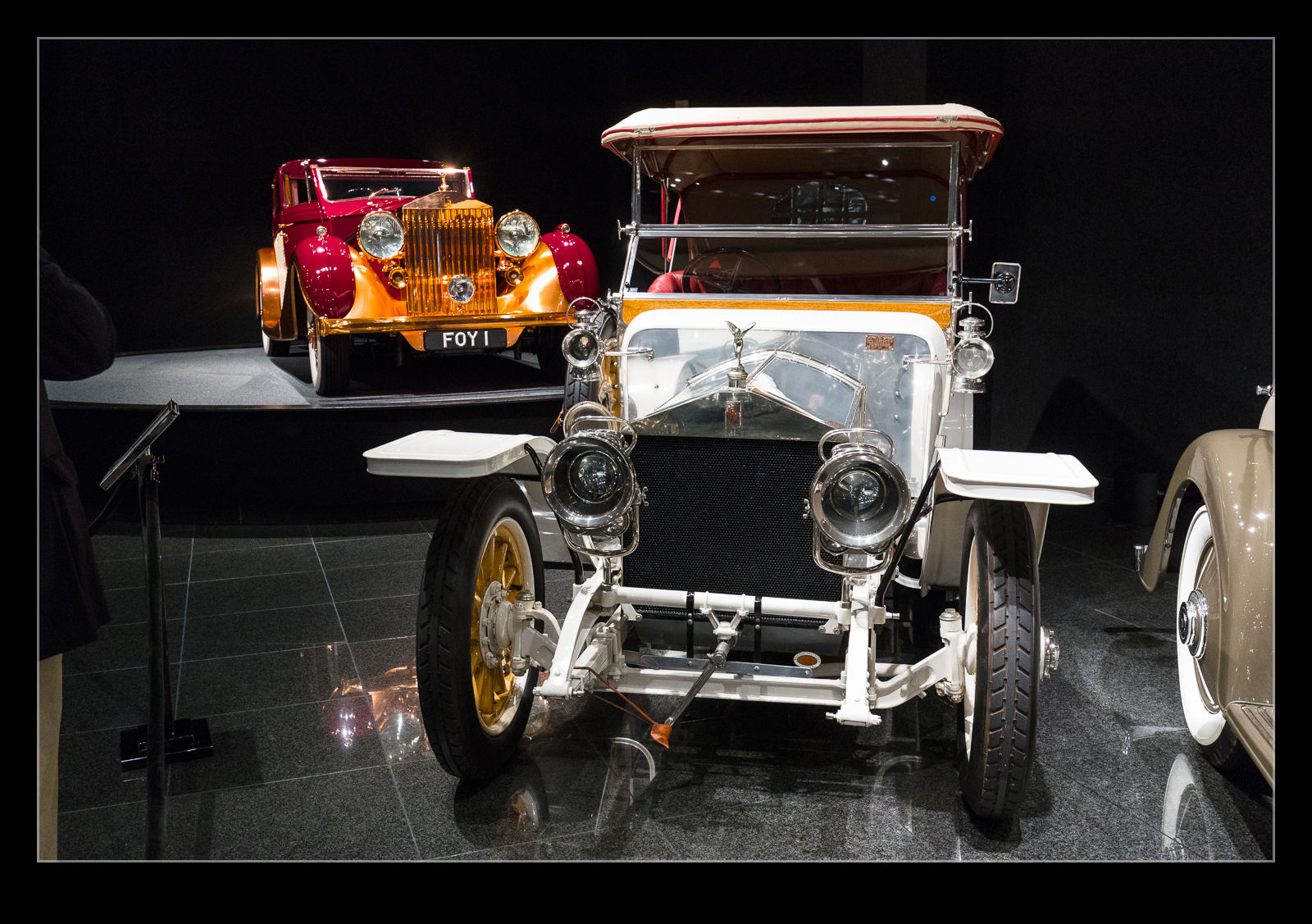 After Hobbo had finished his talk and was setting up for autographs, I took a quick wander around the main floor of the museum.  Some exhibits were gone to make space for the presentation but there were still plenty of cars on show.  Things have been rearranged since my previous visit which I wrote about here.  I knew that time was tight for me and I would need to go but I did get a few shots of some of the cars before calling time and heading home. 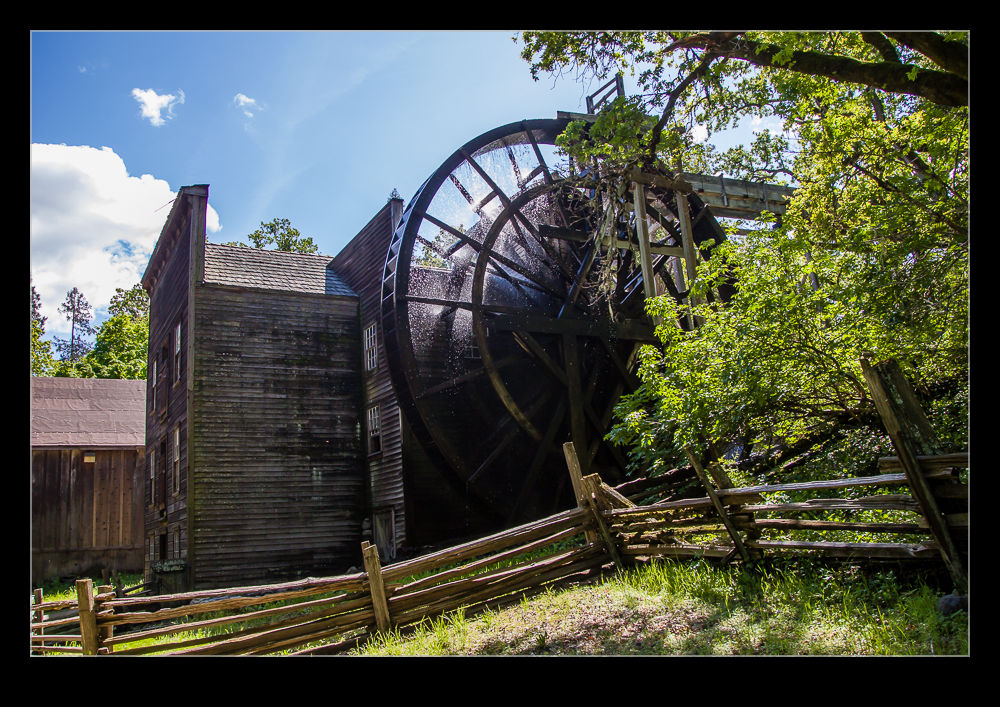 Sometimes you find yourself doing something that you hadn’t planned but that turns out to be far more interesting than you had envisaged. That is certainly the case with Bale Grist Mill. We were taking a day trip up to Napa Valley with my Mum while she was staying. As we drove down towards St Helena, Nancy remembered seeing something about this place so, as we came upon it, we decided to stop in and have a look around. 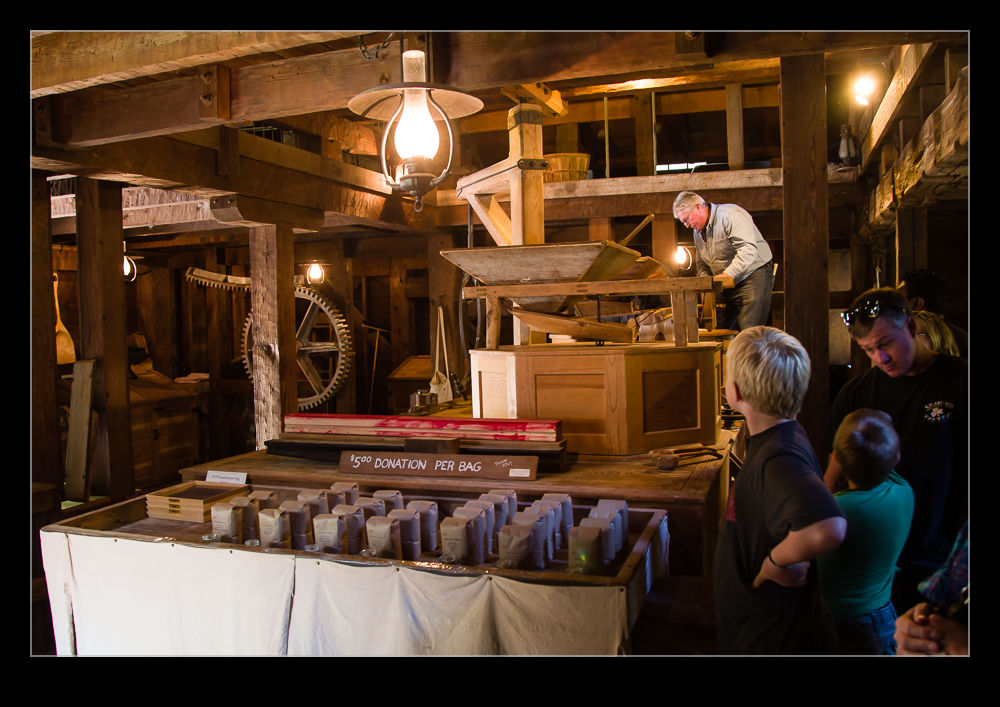 It is a restored water mill that is used for grinding wheat and corn. It is a state park controlled location with a great selection of volunteers helping to keep the place working. The mill wheel is a huge affair fed by an aqueduct that used to come from the mill ponds up the hill. Now they are under someone else’s control so the aqueduct has been shorted and they feed it with water in a continuous cycle. Not quite the same thing but nothing to complain about. 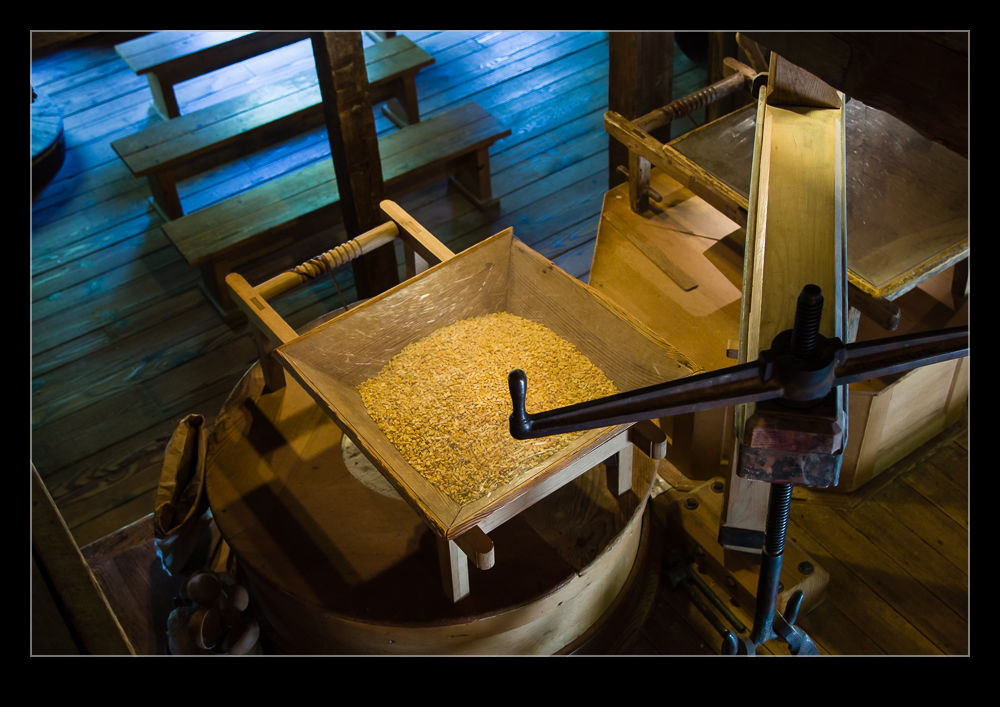 Inside the mill, they give a great tour explaining the history of the mill itself and the guy it is named for. They demonstrate how the farmers’ crop would be delivered and the processes it would go through to clean it, grind it and then hand it back to the farmer. All of this culminates in a live demonstration of the grinding process. The mill wheel drives a series of belts and gear throughout the mill that control all of the processes whether it is the cleaning of the grain, the grinding, the elevators to move it around or the sifting that separates the different grades of milled product. You get to see them grind some corn (as it was when we were there) and adjust the stones to get just the right texture of product. 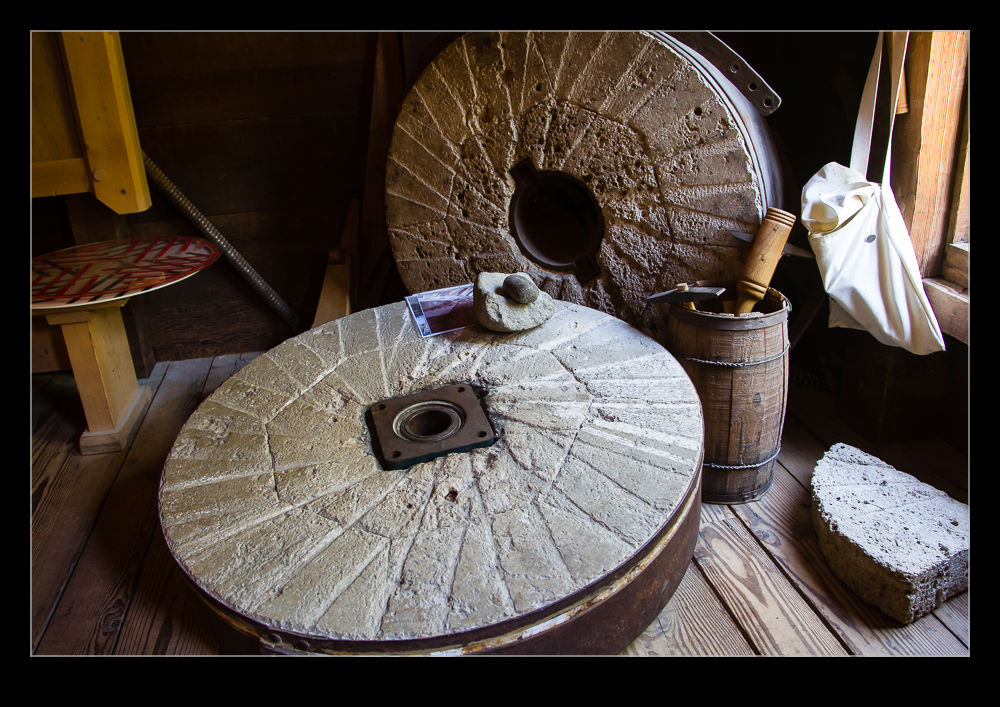 Interestingly, while they sell the flour or polenta in the mill, they mark it as not fit for human consumption. Since there is bare wood in the process rather than stainless steel everywhere and they let public members watch it being ground, they do not conform to the food hygiene laws. Therefore, they cannot sell it as food. That does not, of course, stop you from using it as food. We bought some flour which has made some excellent bread. The volunteers all eat it too so you can make your own choice if you visit.