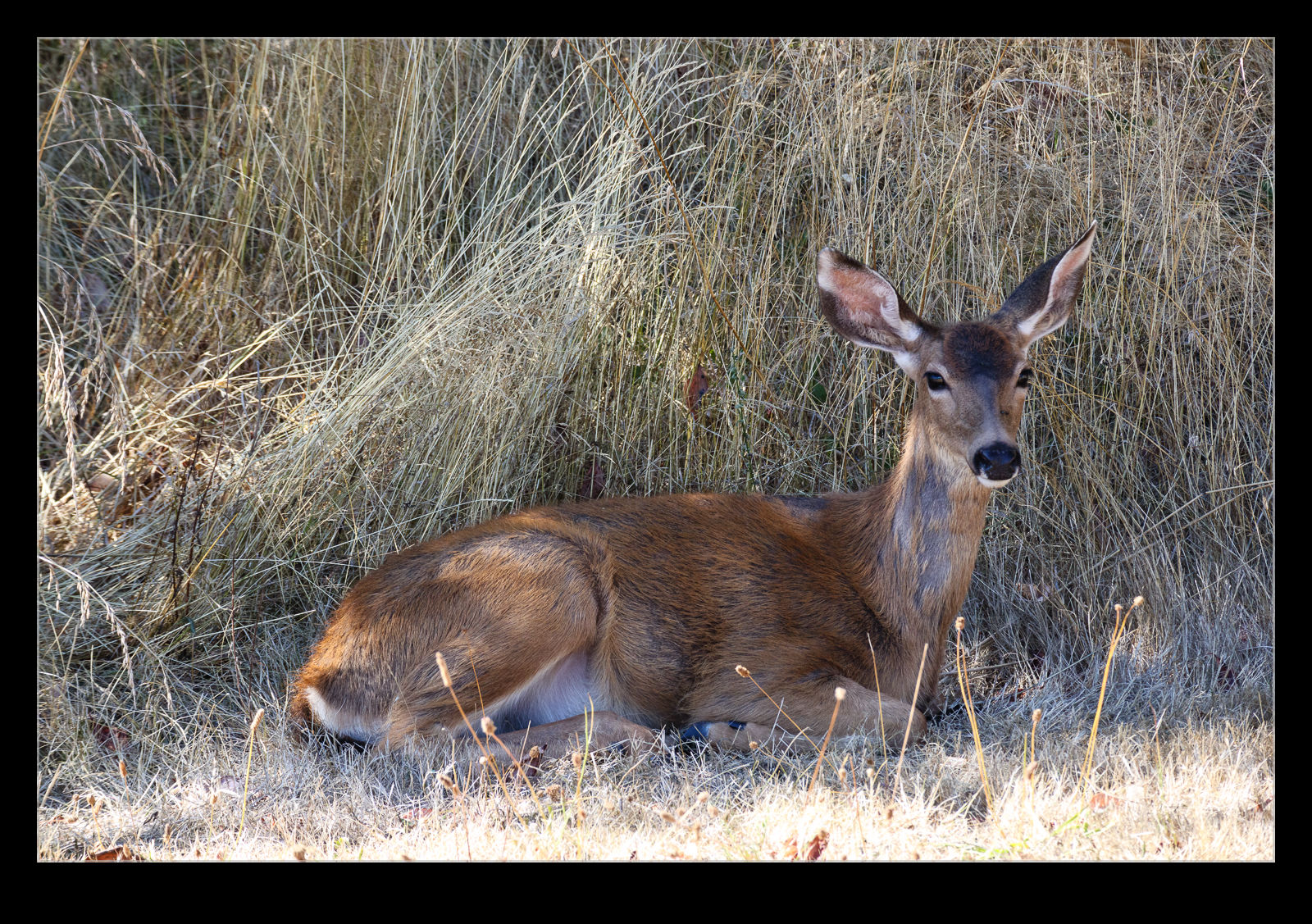 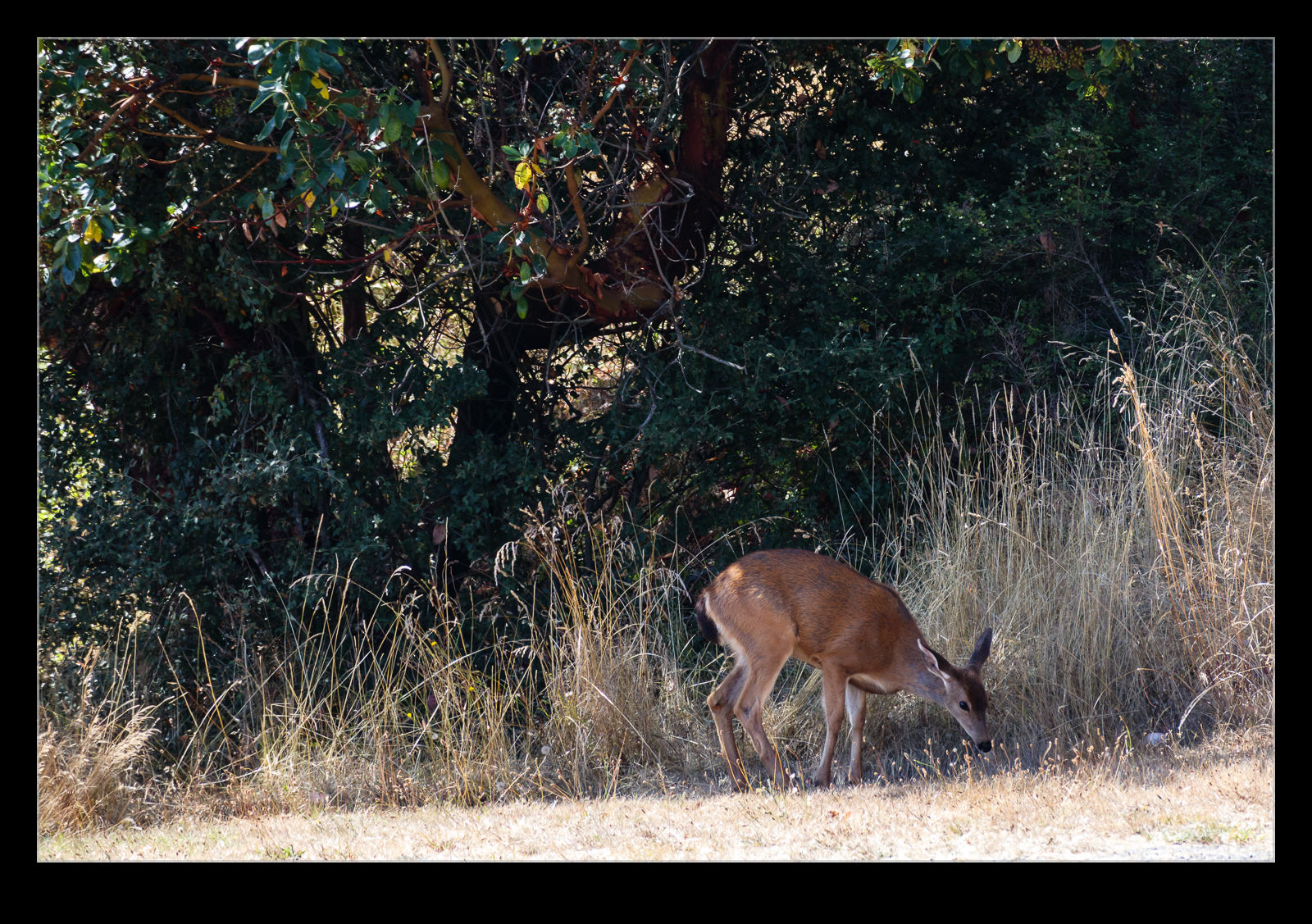 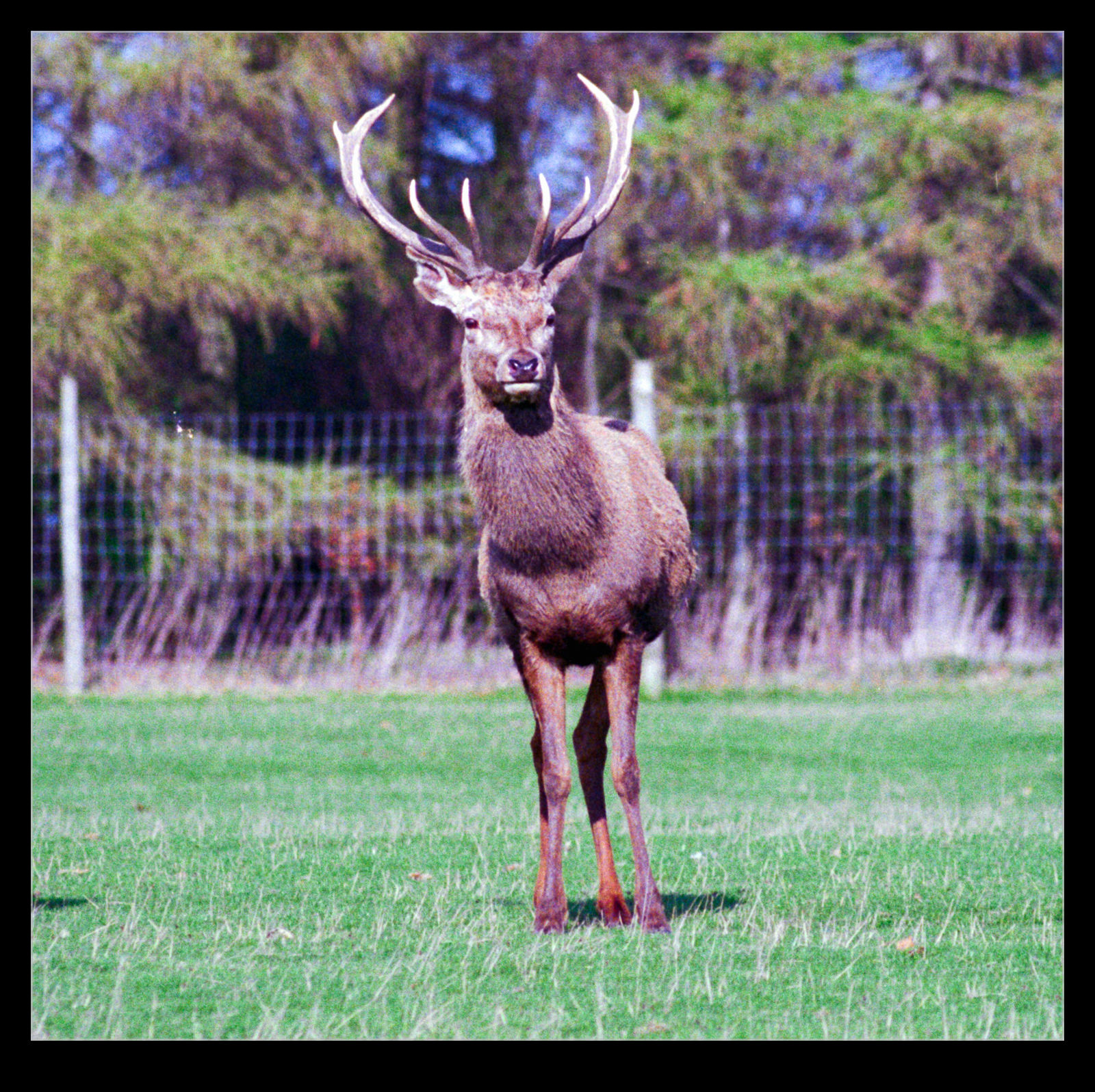 More from the negative scan archive.  Another hike we were taking and this time the wildlife is a little larger.  This herd of deer was grazing nearby and there were some impressive sets of antlers on display for some of them.  One stag was staring in our direction briefly so I got a nice head on shot.  The scan of the negative with my 40D seems to have come out pretty well. 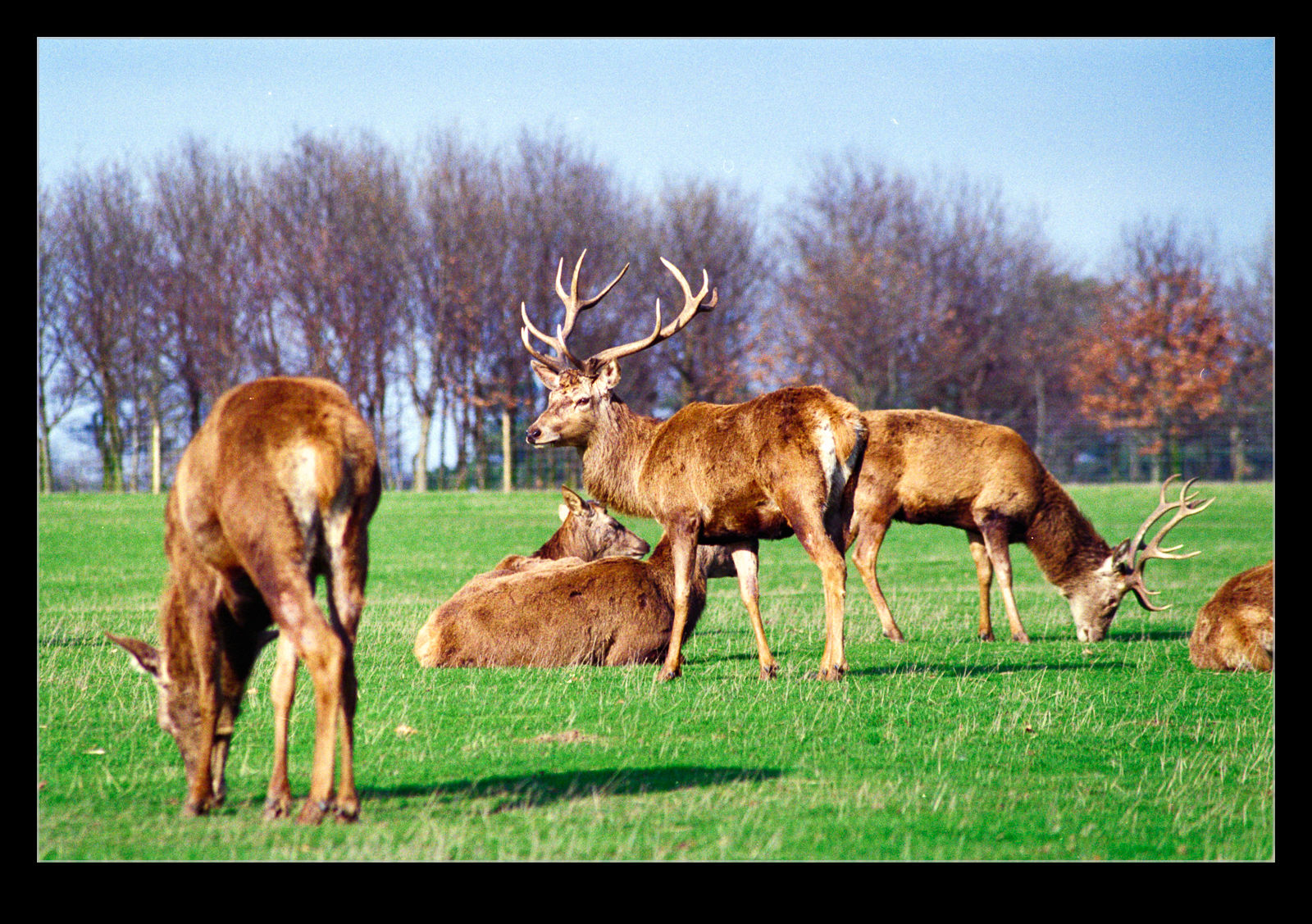 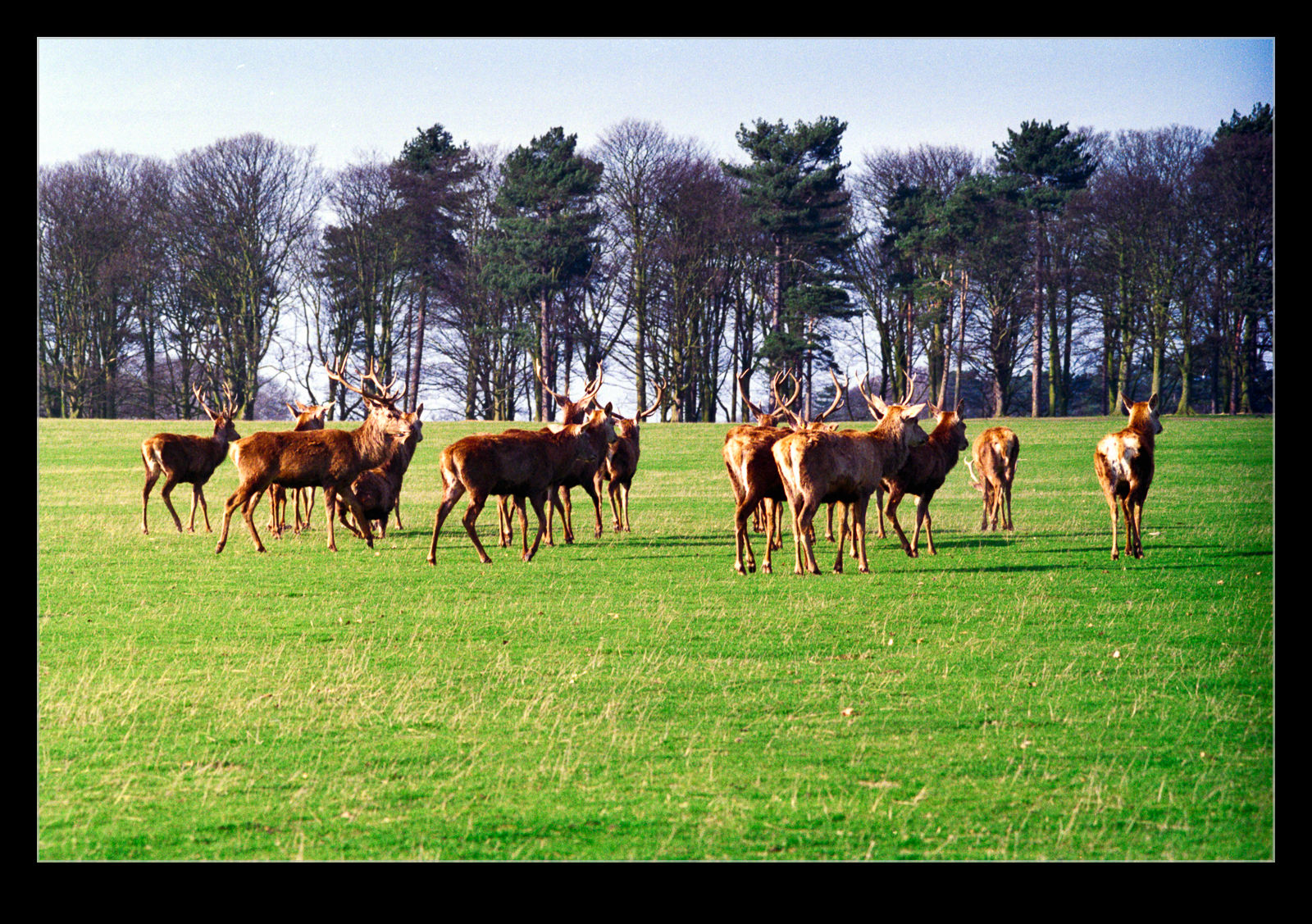 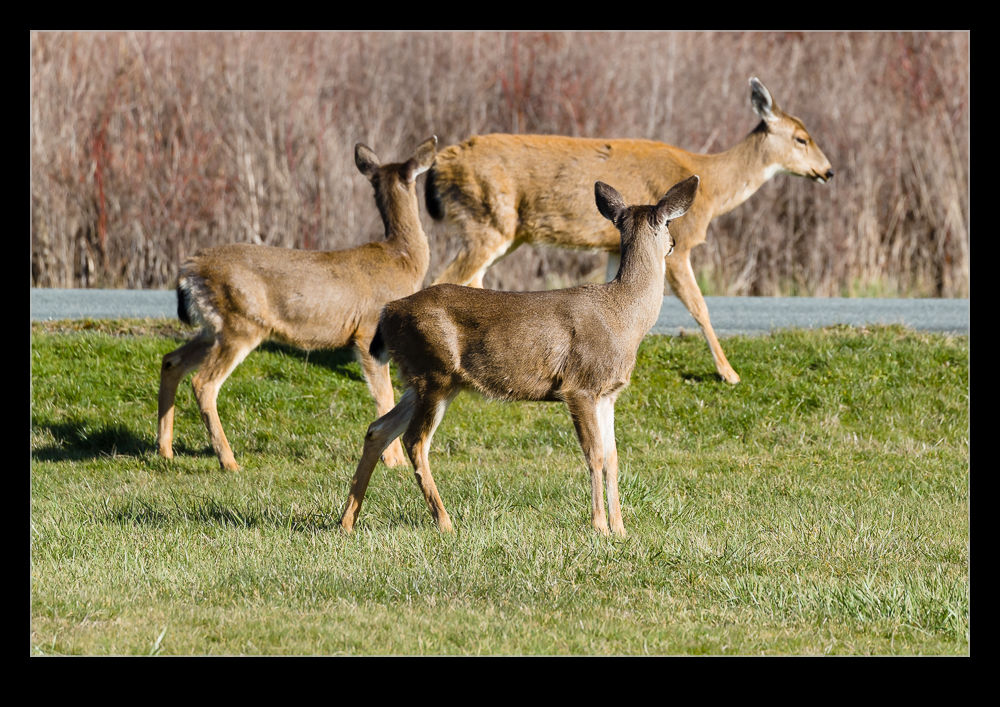 Fort Casey had a bunch of deer that were chomping their way around the grounds while I was there.  These deer seemed pretty fearless.  I guess there are tons of people coming through the Fort, most of whom will not be any trouble to the deer so they must get pretty used to people in close proximity and know that they are not in any threat.  Consequently, I found that my efforts at getting a photo were pretty straightforward.  If I tried to get too close, I figured that they would move off but I could be close enough without affecting them. 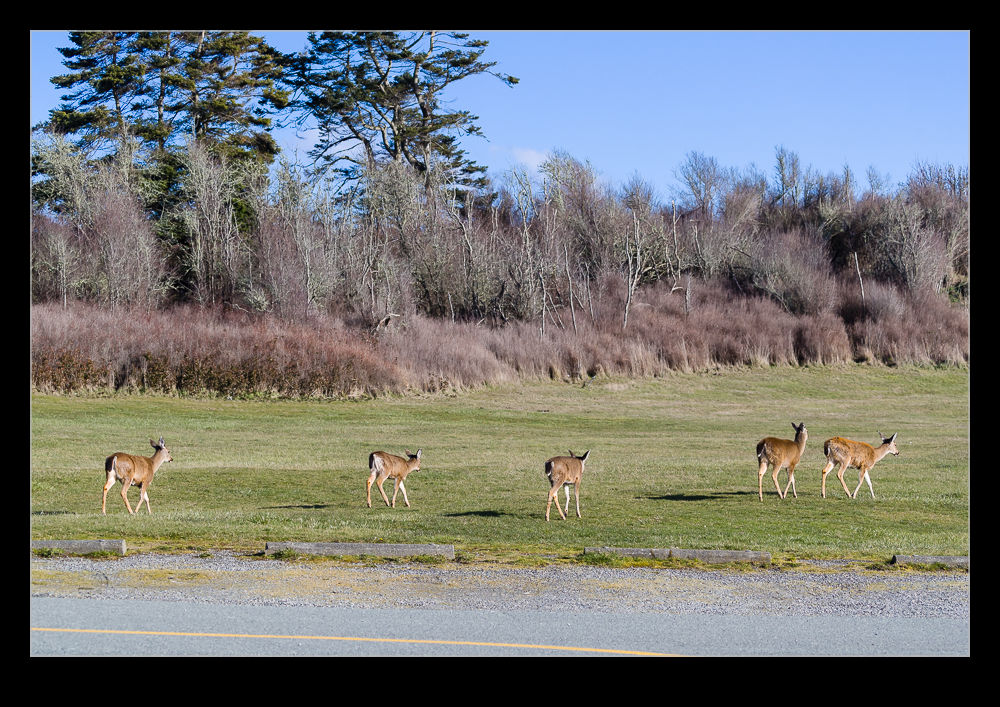 The one creature that did seem to spook one of the deer was a cat.  Sitting up against a wall was a ginger cat that was sunning itself.  It didn’t seem to be interested in doing anything at all but the deer was aware of it and seemed to be quite nervous.  A number of times it would jump, presumably because the cat had twitched in some way.  It seemed pretty clear that it was not moving for anyone though.  I guess the deer is going to have to get used to it. 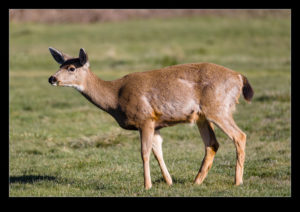 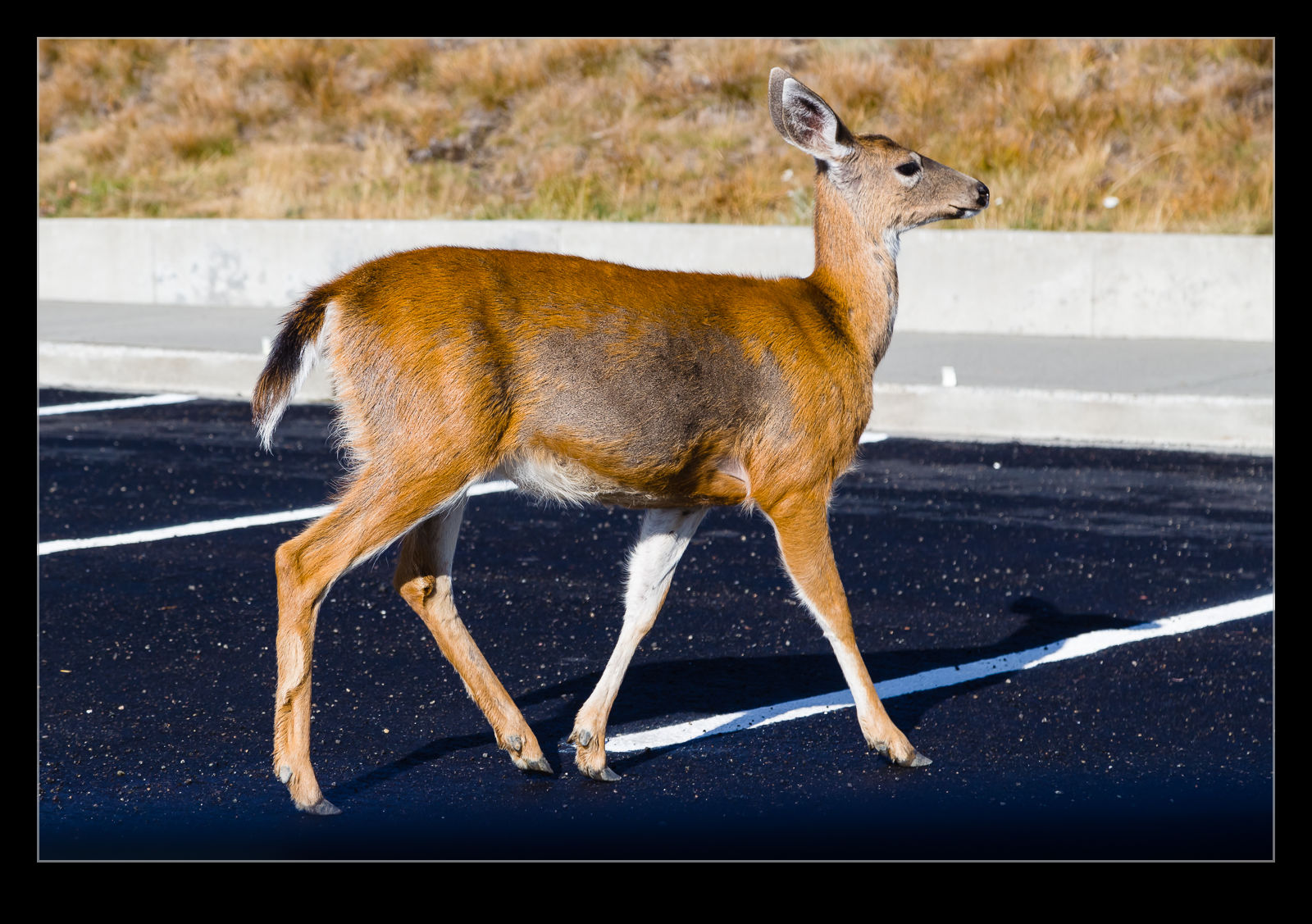 Planning our time in the Olympics meant checking the weather forecast.  We wanted to go up to Hurricane Ridge but doing so on a day that was forecast for rain was not going to be very good idea.  However, one of our days was showing clear skies so we headed up the mountains.  The forecast was not wrong.  The weather was great and there were plenty of nice overlooks to check out on the way up.  Once we got to the top, I was turning in to park when I saw some people stopped ahead of me.  Turns out that there are a bunch of deer that hang around up on the ridge and they don’t seem in the least bit bothered by the presence of people.  One was looking to come through the parking space I was planning on using.  I waited until it decided it was ready to move and then we parked the car.  It headed off to join its family. 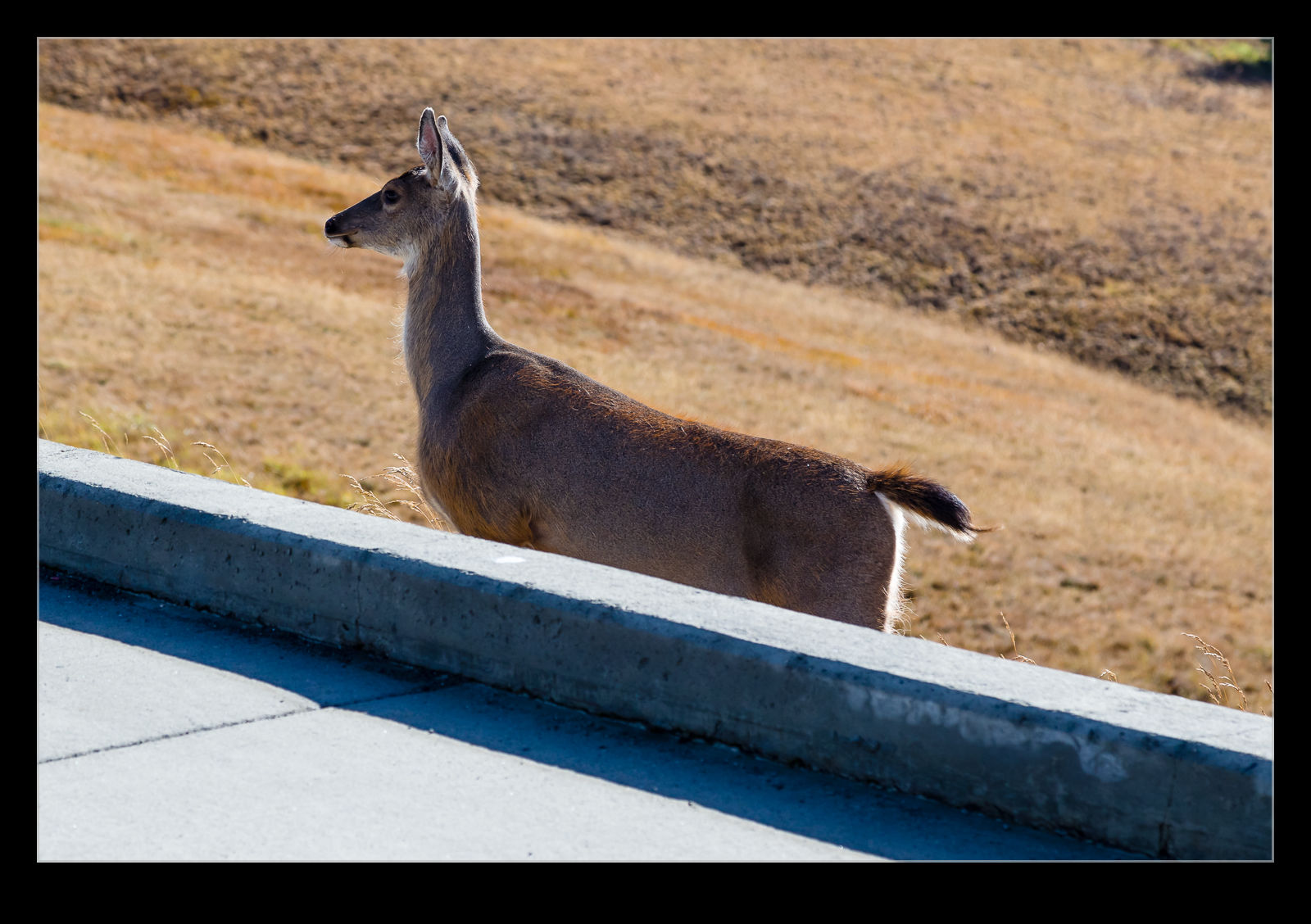 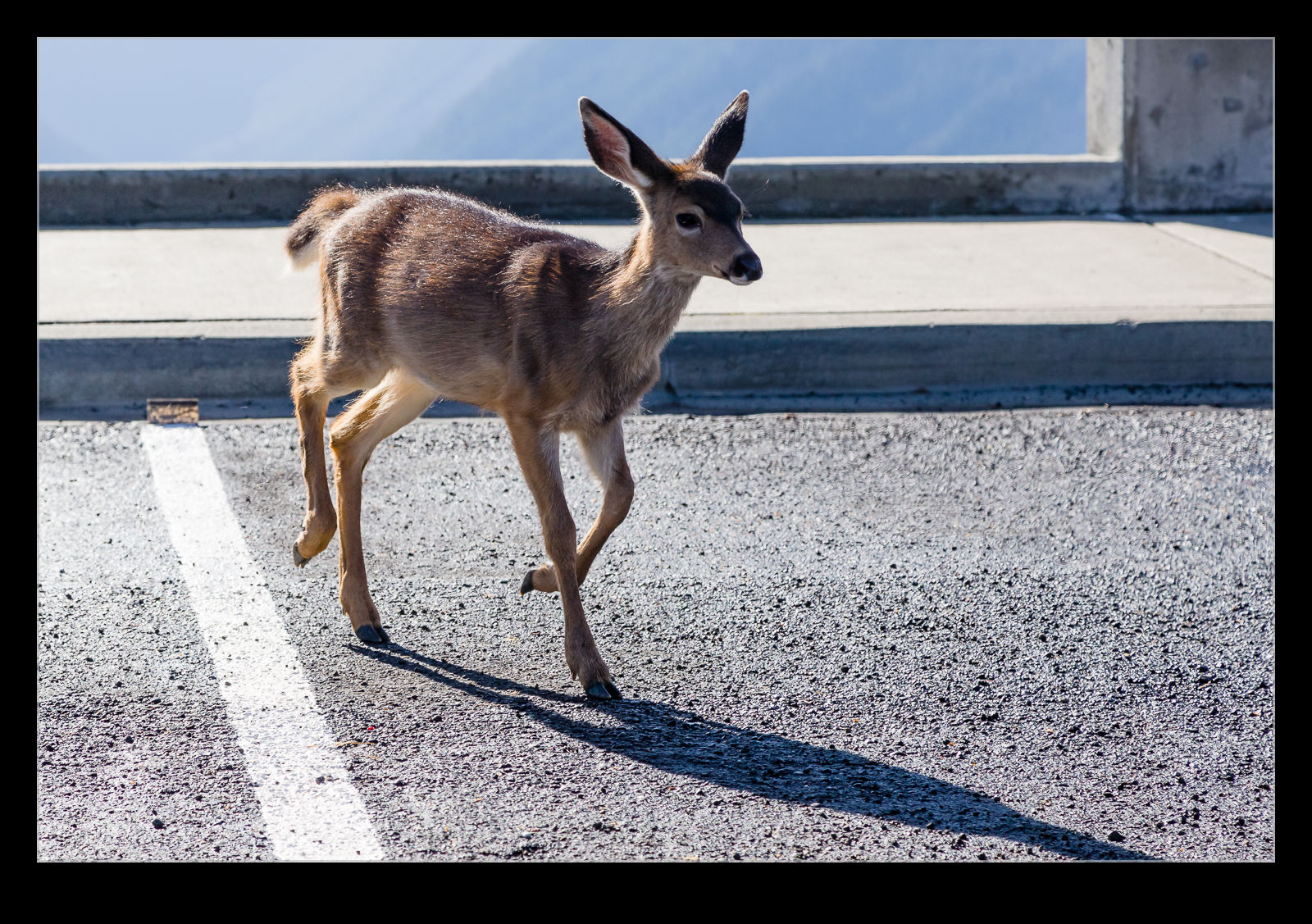 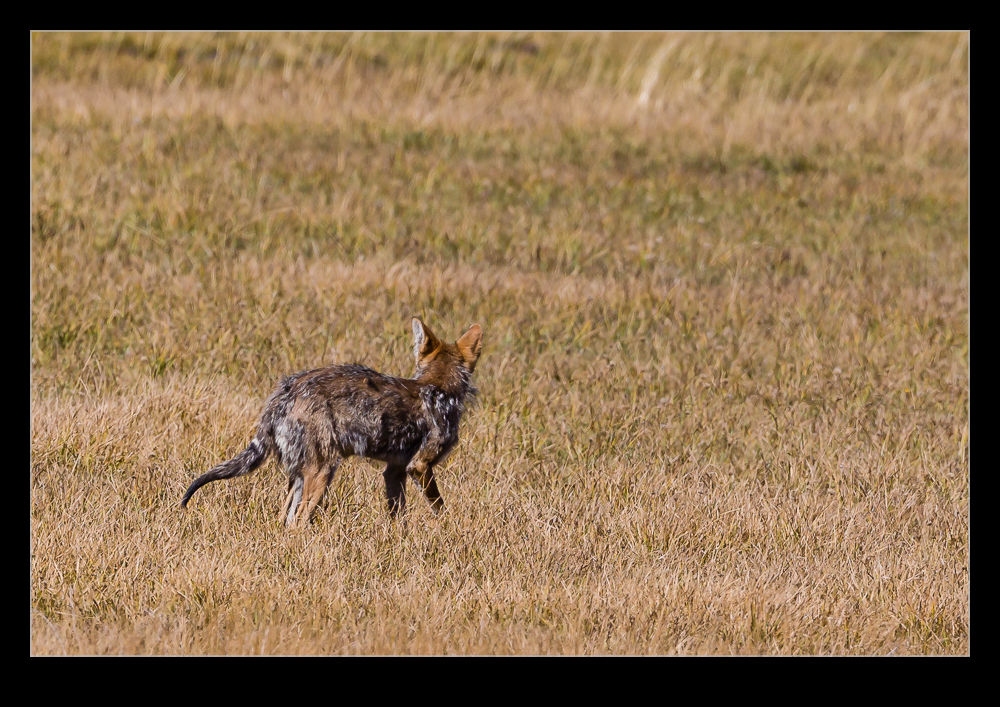 As we were driving back past Tuolumne Meadows on the return journey through the Tioga Pass, Nancy saw something moving out in the grass. Fortunately we were very close to a pull off so we hopped out. She grabbed the binoculars and I grabbed the camera. It was a coyote strolling around on the hunt for a snack. He was heading roughly towards us which looked promising. Sadly, a family next to us decided to try their best wolf howls since they seemed to think that this would in some way help the situation. 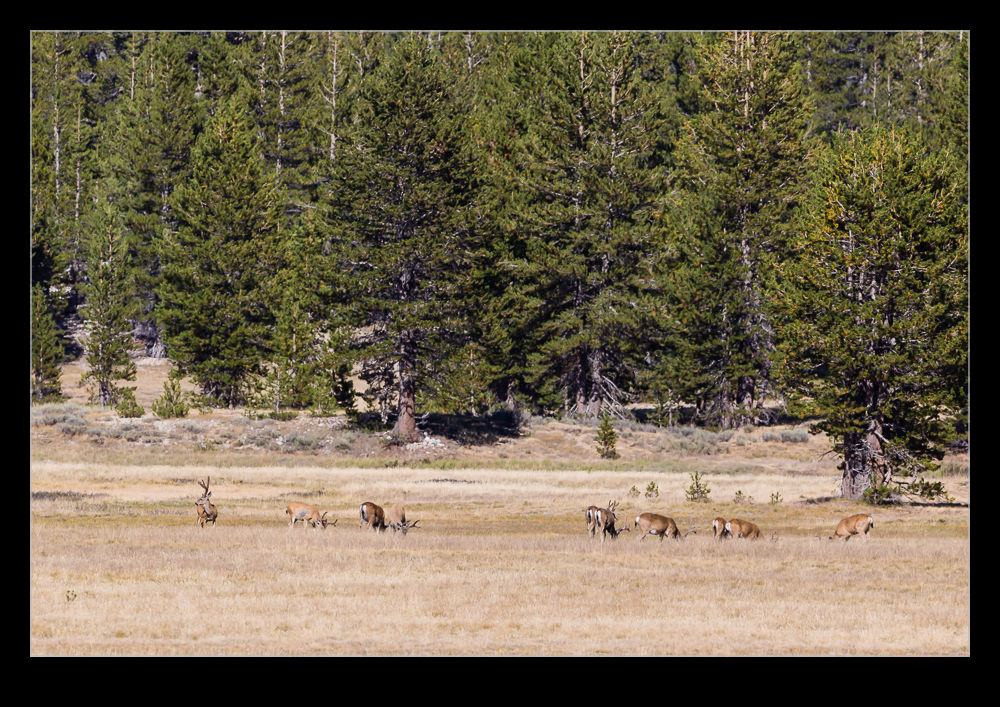 The coyote clearly decided that a better idea was to head off in the other direction and I shared his assessment. However, before we moved on, I took a quick scan across the meadow and saw a small herd of deer. At this time of year, it doesn’t take much to work out who the males are! 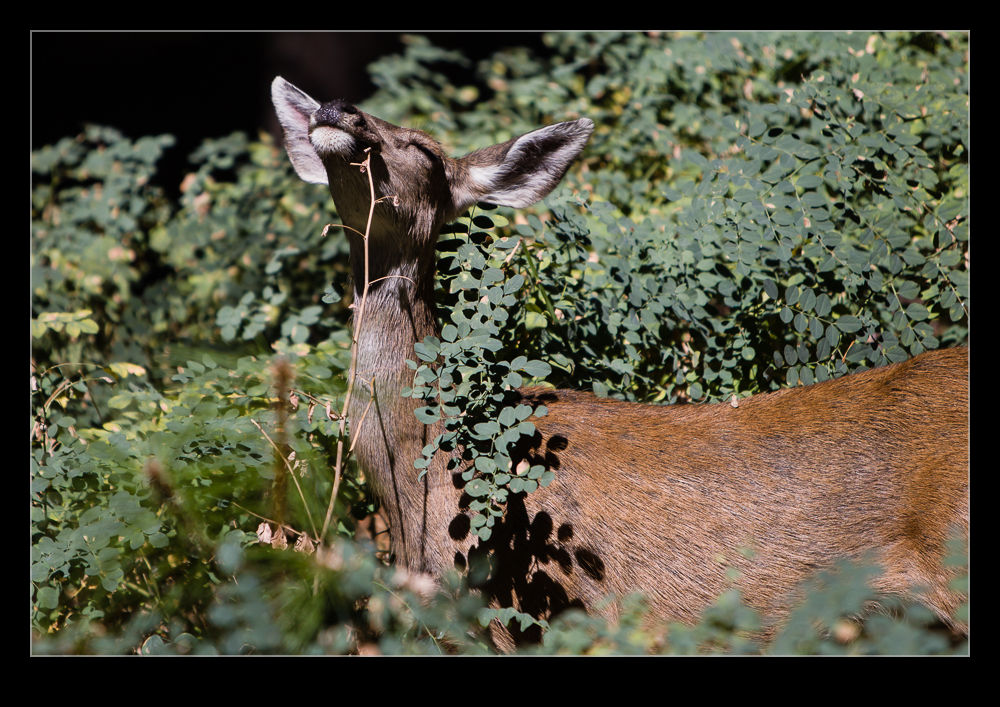 When you are in a place like Yosemite, your are very aware that you are in an environment where nature has the upper hand.  However, you do think the wildlife will still be wary of man.  That is not true at all though.  A few times while I was walking, I came across herds of deer.  I always think of deer as skittish creatures – hardly surprising since around here they are considered a target by many – but these guys seemed not only used to humans but bored with us.  As long as we didn’t do anything too quickly, they continued on unfazed. 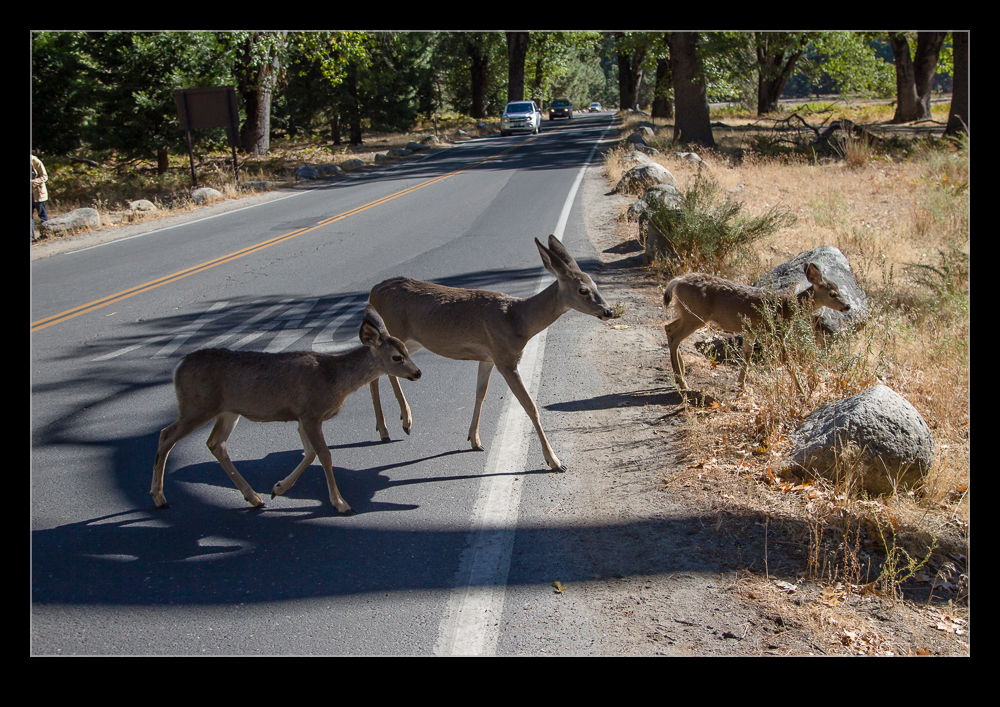 This even extended to Yosemite Valley itself.  I was taking some shots of the valley when a small group crossed the street and walked right past me to get to their next snack.  I watched them for a while and then headed back to the car.  There I saw a buck in the tall shrubs with a buddy not far behind.  When he wanted to come in my direction, he did exactly that. 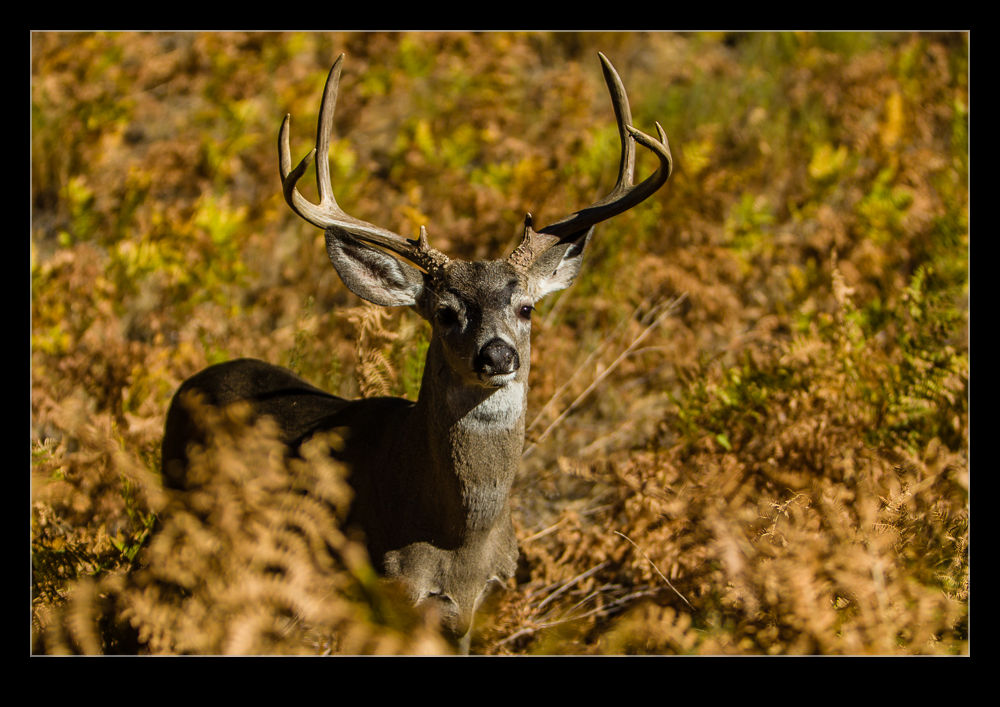