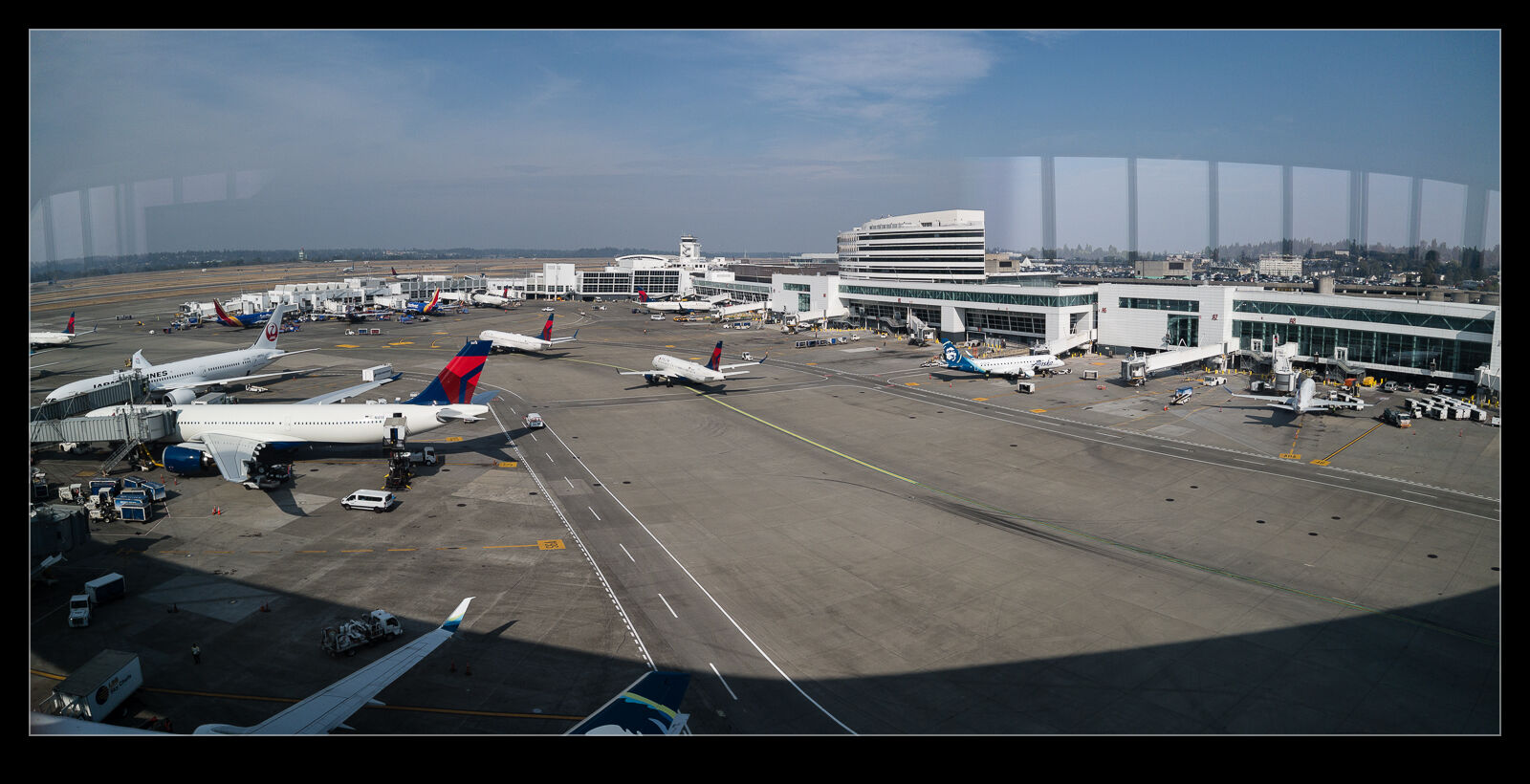 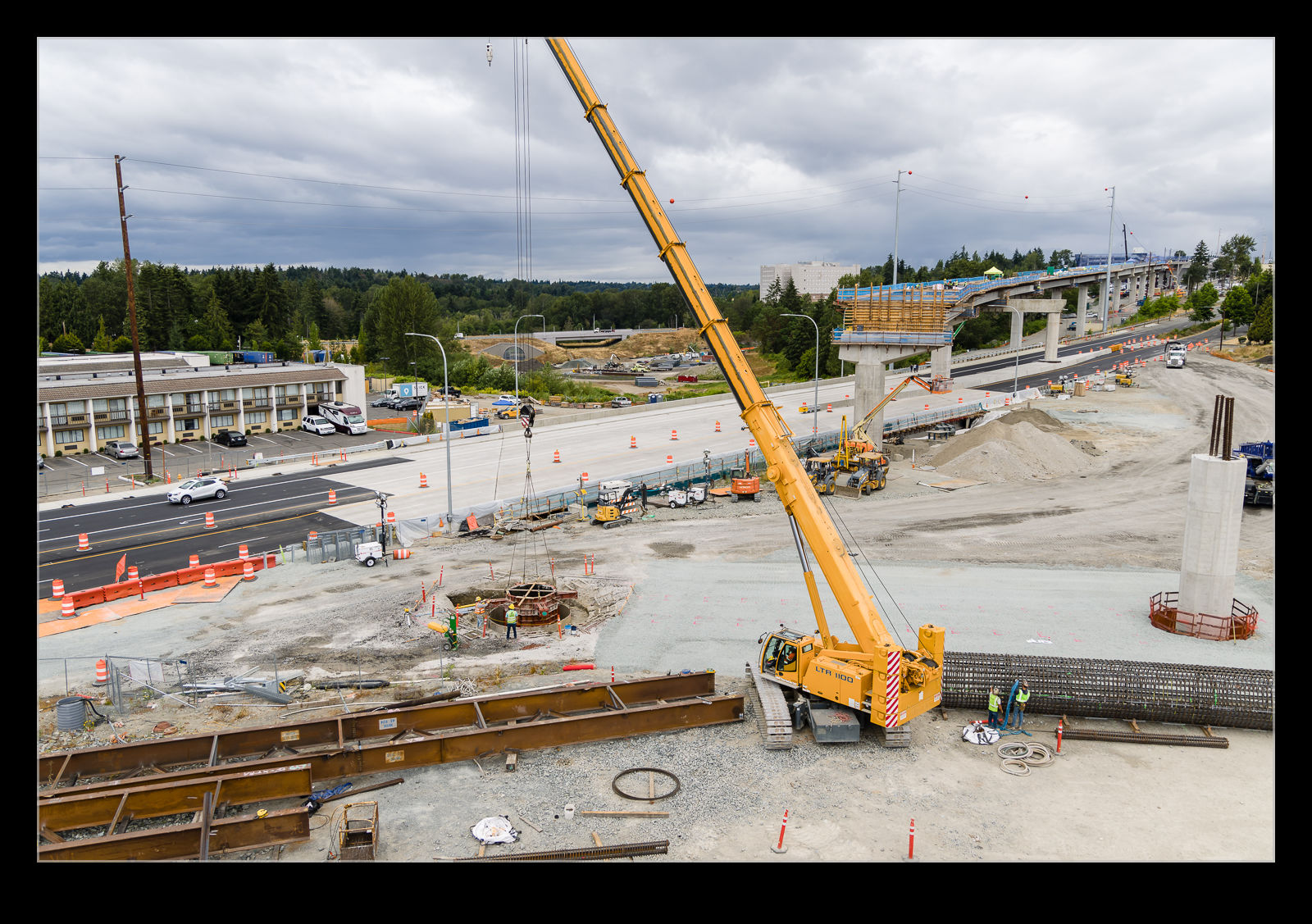 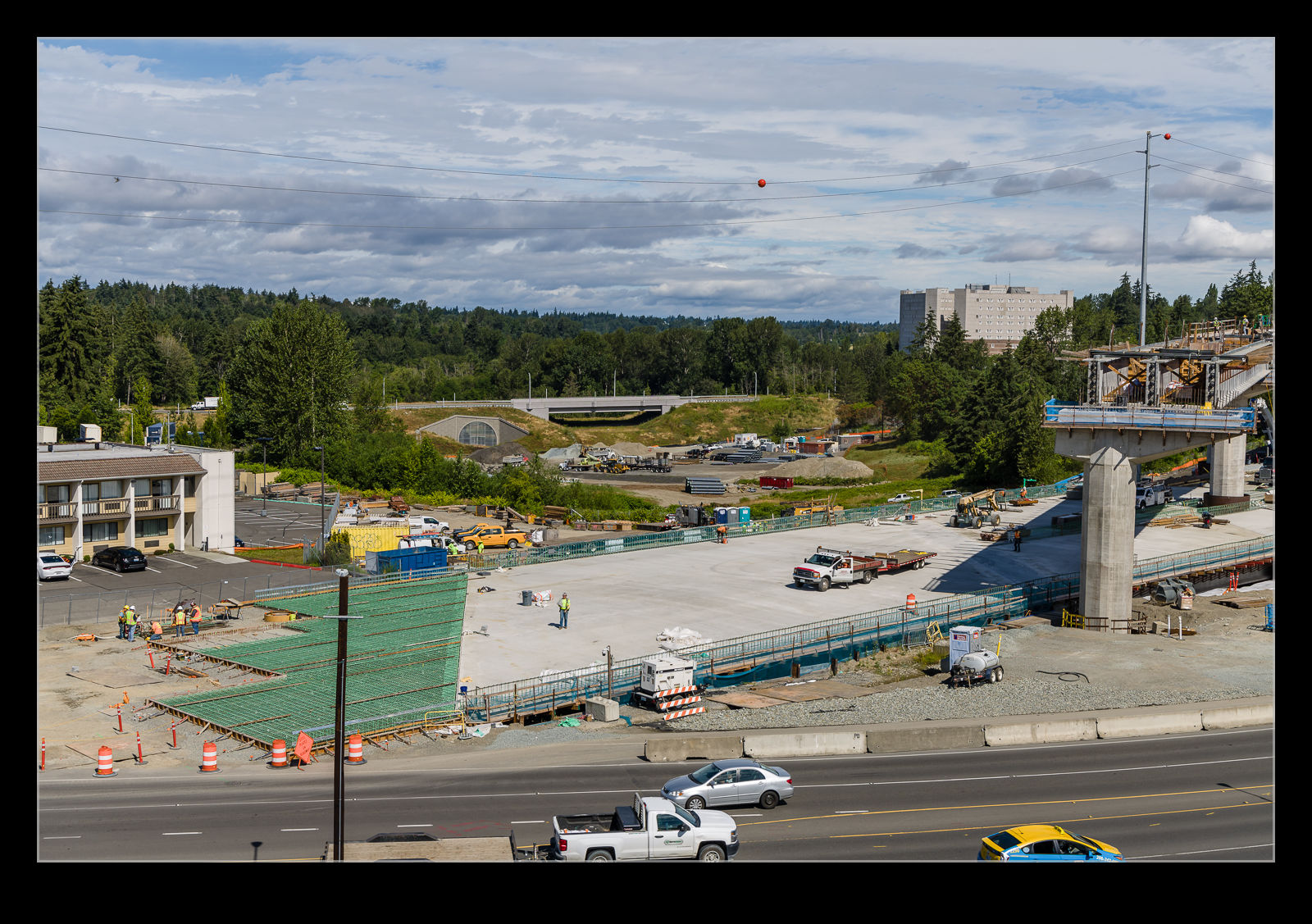 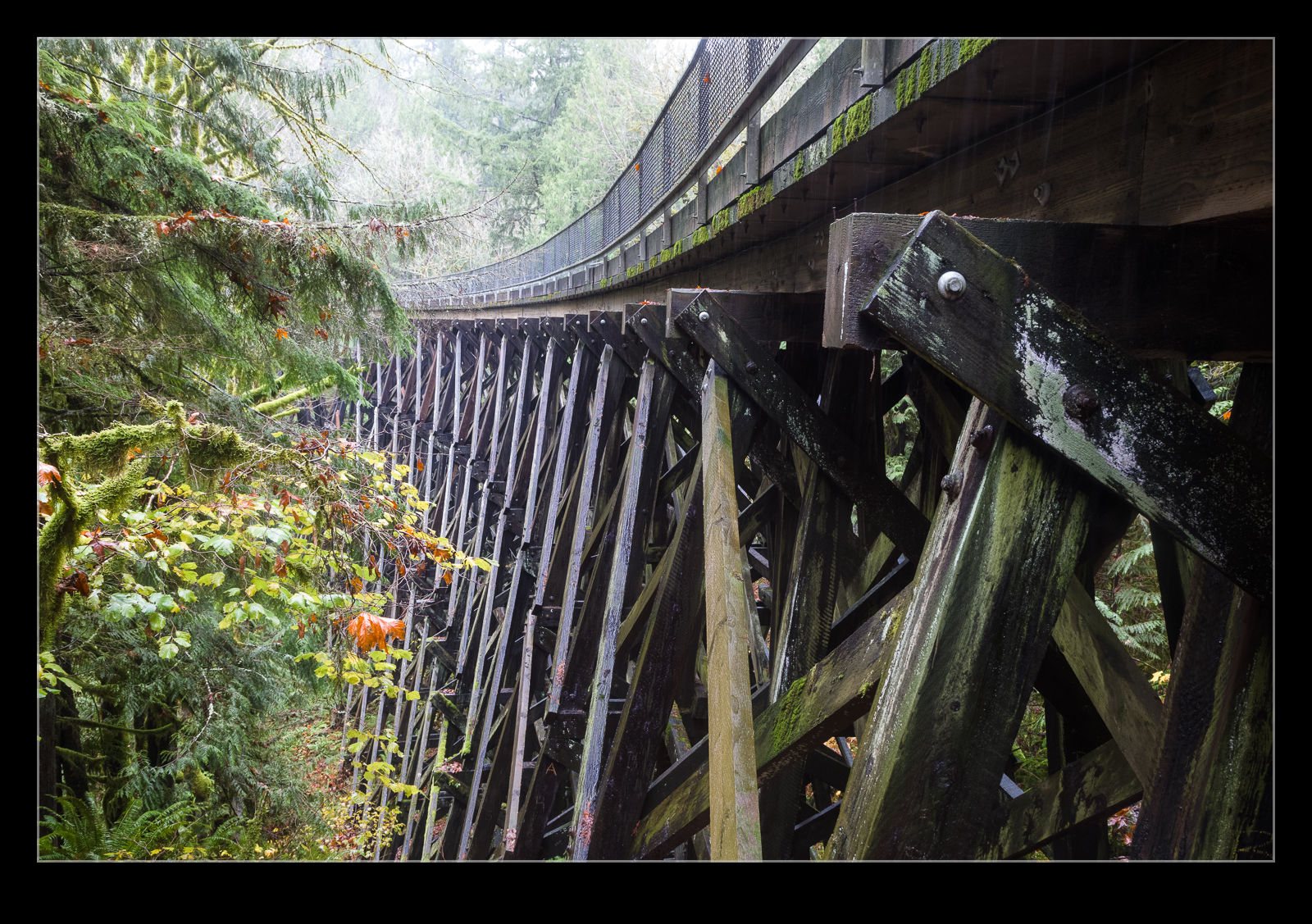 The thing that attracted me to a stroll along the Snoqualmie Valley Trail was the presence of an old railway trestle bridge.  Known as the Tokul Trestle, it seemed to be on a curve over a deep valley based on what I could see on Google Maps.  What I didn’t know was how much you could see of it from either side.  Only one way to find out I guess. 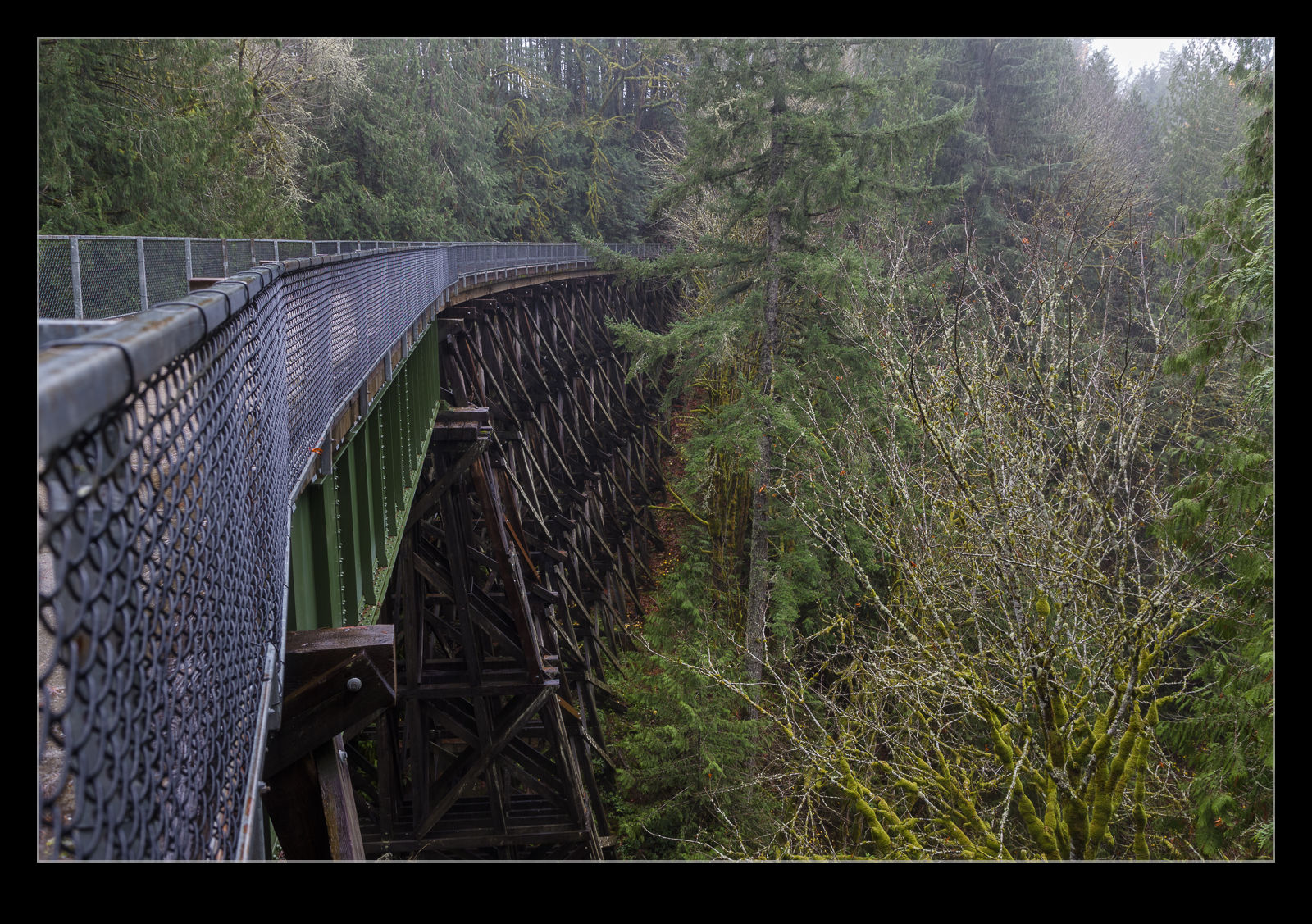 It wasn’t a terribly long walk from where I had parked the car to get to the trestle.  When you don’t know a route, it always feels a bit longer but walking back seems a far shorter journey.  Since the trestle was on a curve and the route was very tree lined, it was pretty much out of sight until I was nearly upon it.  The majority of the trestle seems pretty old but there is a center section that seems to be more modern.  Of course, that could have been there for ages and the whole bridge was maybe restored when the trail was being created.  If I had done some research, I might have been able to tell you! 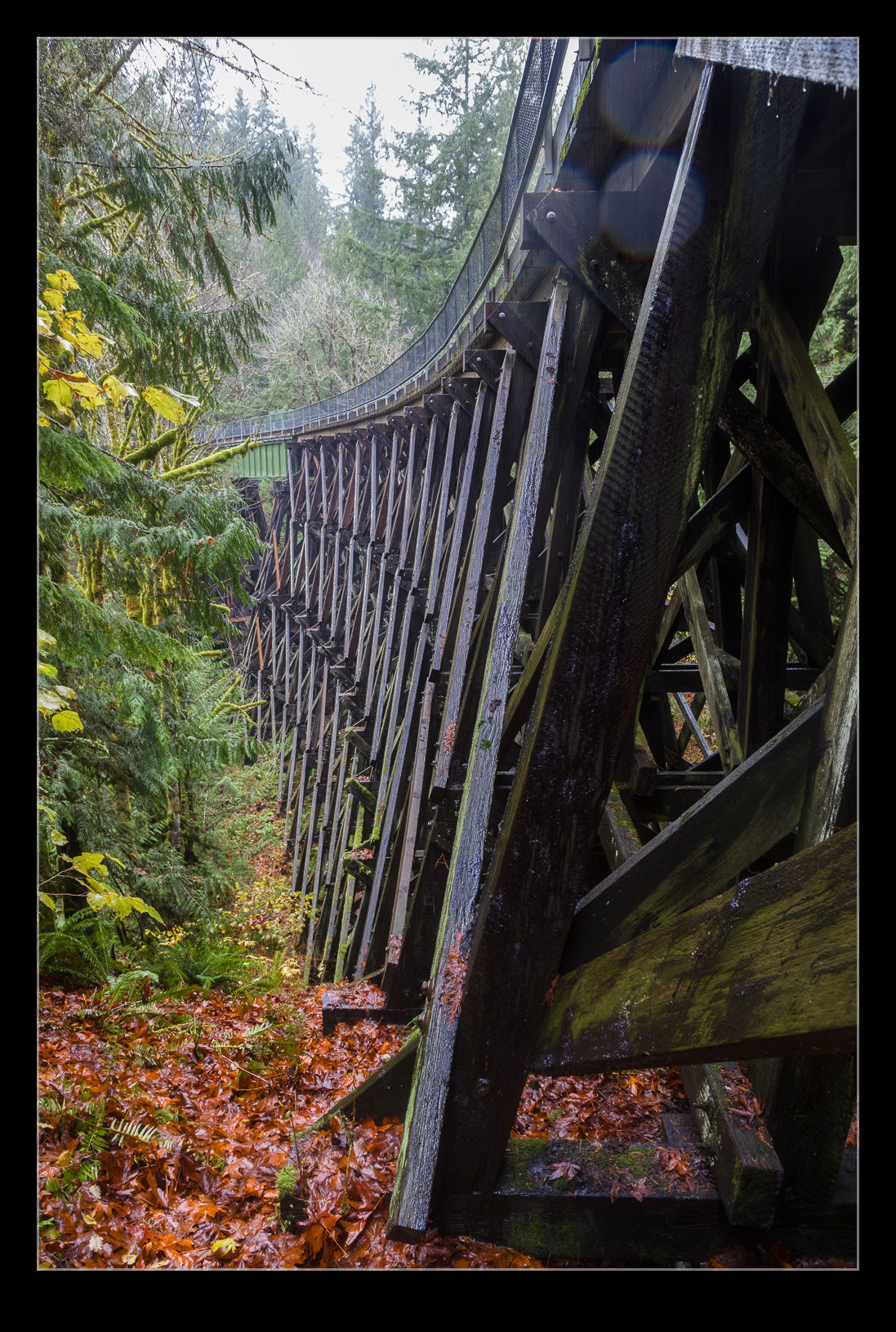 The curve of the bridge is quite gradual and, as I had wondered, the approaches are tree lined which makes getting too much of an angle on the bridge tricky.  A drone would be a very handy thing for getting a broader view of the bridge or being down on the river bed below.  Not sure who owns that but there is a firing range down there somewhere which I could hear along part of the walk.  You can get down on the sides of the bridge at each end to get a bit more of a view of the structure and I did check that out.  Since I was alone in an area without much cellphone reception, though, I didn’t get too adventurous. 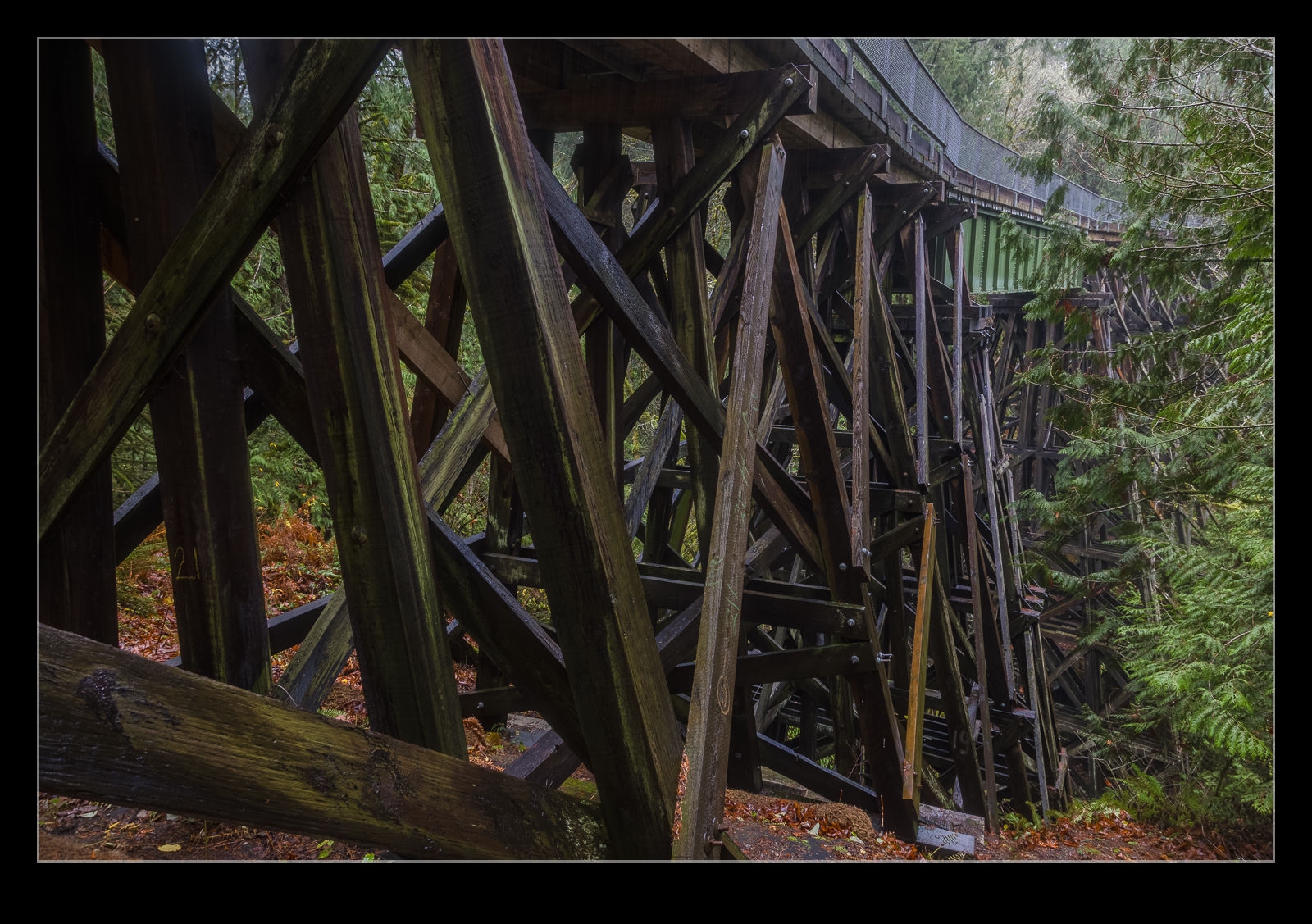 There is something about trestle bridges that really fascinates me.  They seem quintessentially American to me.  In the UK, rail bridges of old are either iron or brick.  They look impressive too and make for great photo subjects.  However, the trestle is something that evokes images of old steam locos crossing the country with wide flared smokestacks.  The idea that they are still around and in good working order continues to surprise me. 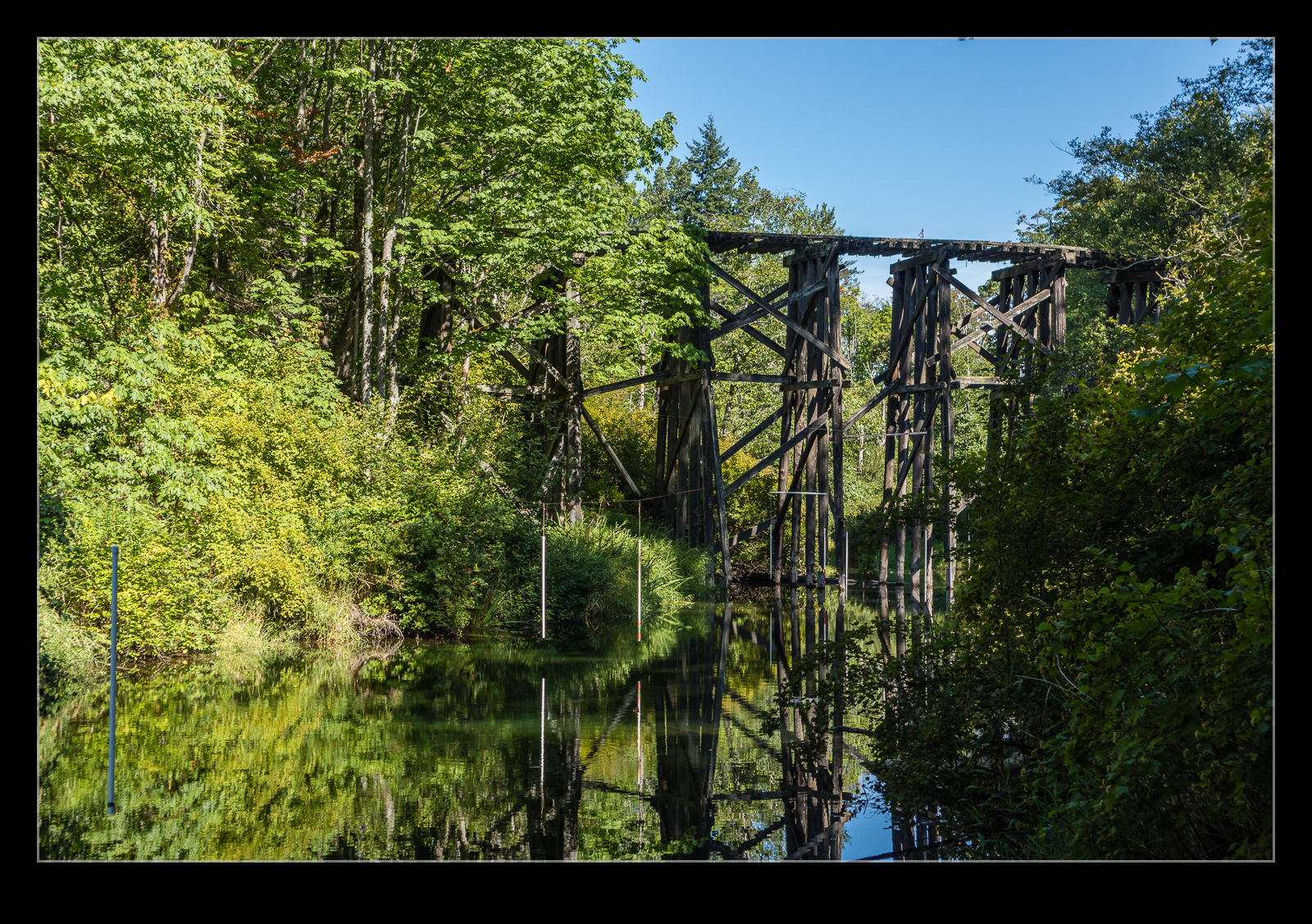 A railroad used to run through what is now Whatcom Falls Park.  While the tracks have now gone, a trestle bridge across the water still remains.  I may have lived in the US a long time now, the presence of trestle bridges still fascinates me.  They have a look of Victorian railroads about them but many have survived.  In the UK, old bridges are either iron or brick with multiple arches.  The trestles have a distinctly American feel to them. 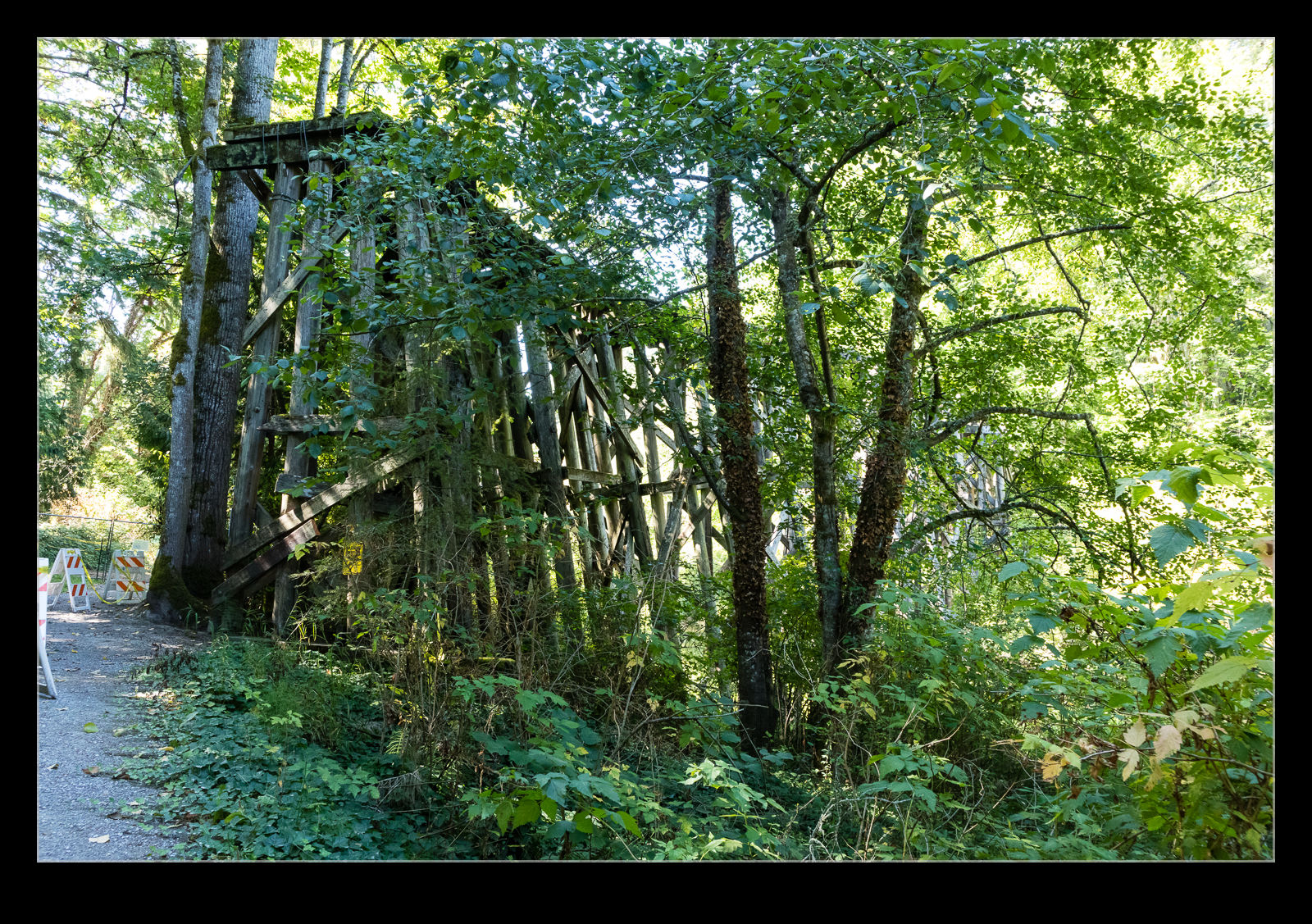 There were some barriers around the end of the bridge while we were there.  Checking out some photos online, it looks like the rails used to be suspended across some of the space.  Maybe these have been removed to stop people getting up there.  Fortunately, the majority of the bridge is still intact.  I wonder what happened to the track bed.  The rails are visible up on the top with ties (sleepers) between them but no support which suggests. Train would have had a rough ride.  There must have been more there at some point. 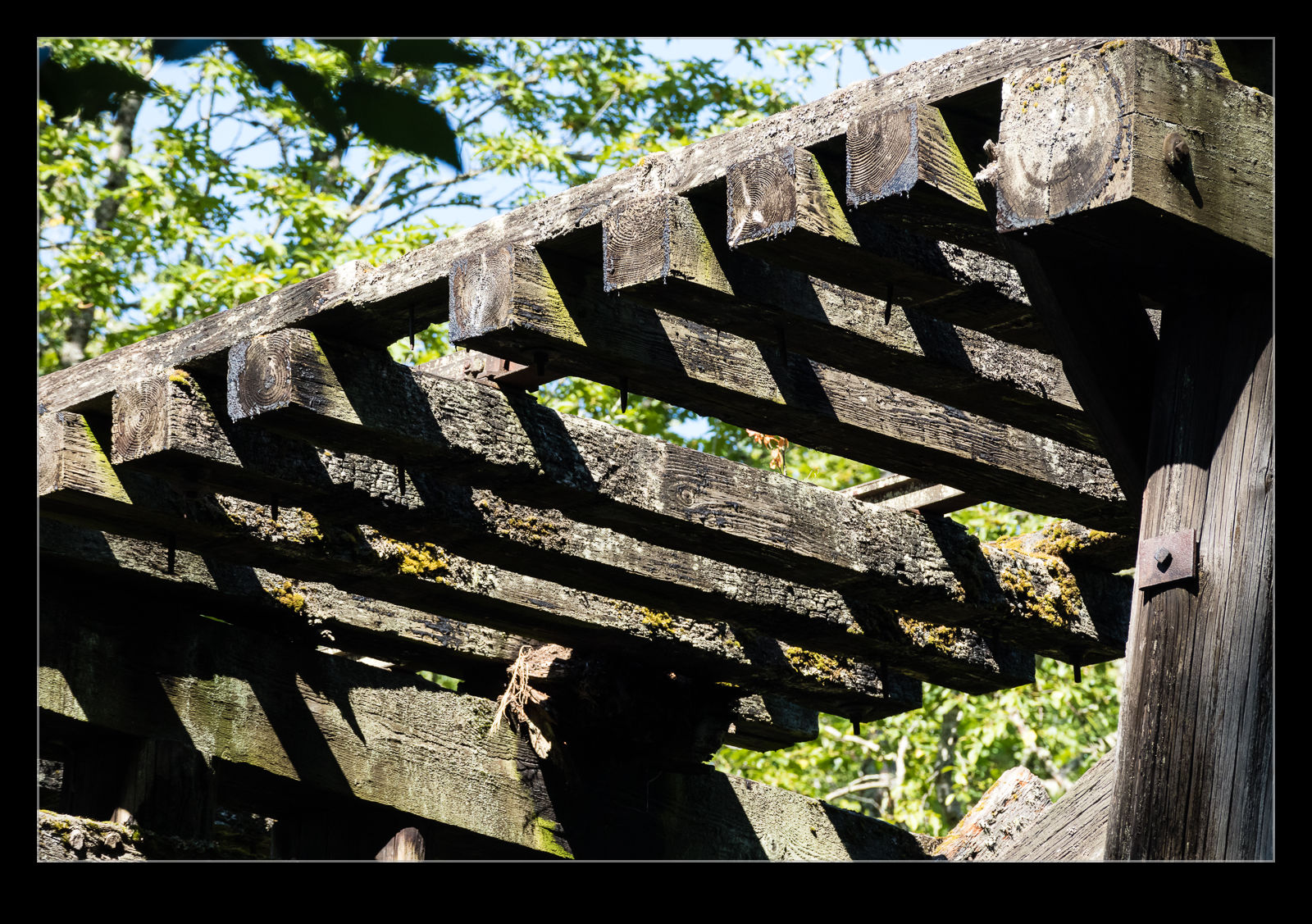 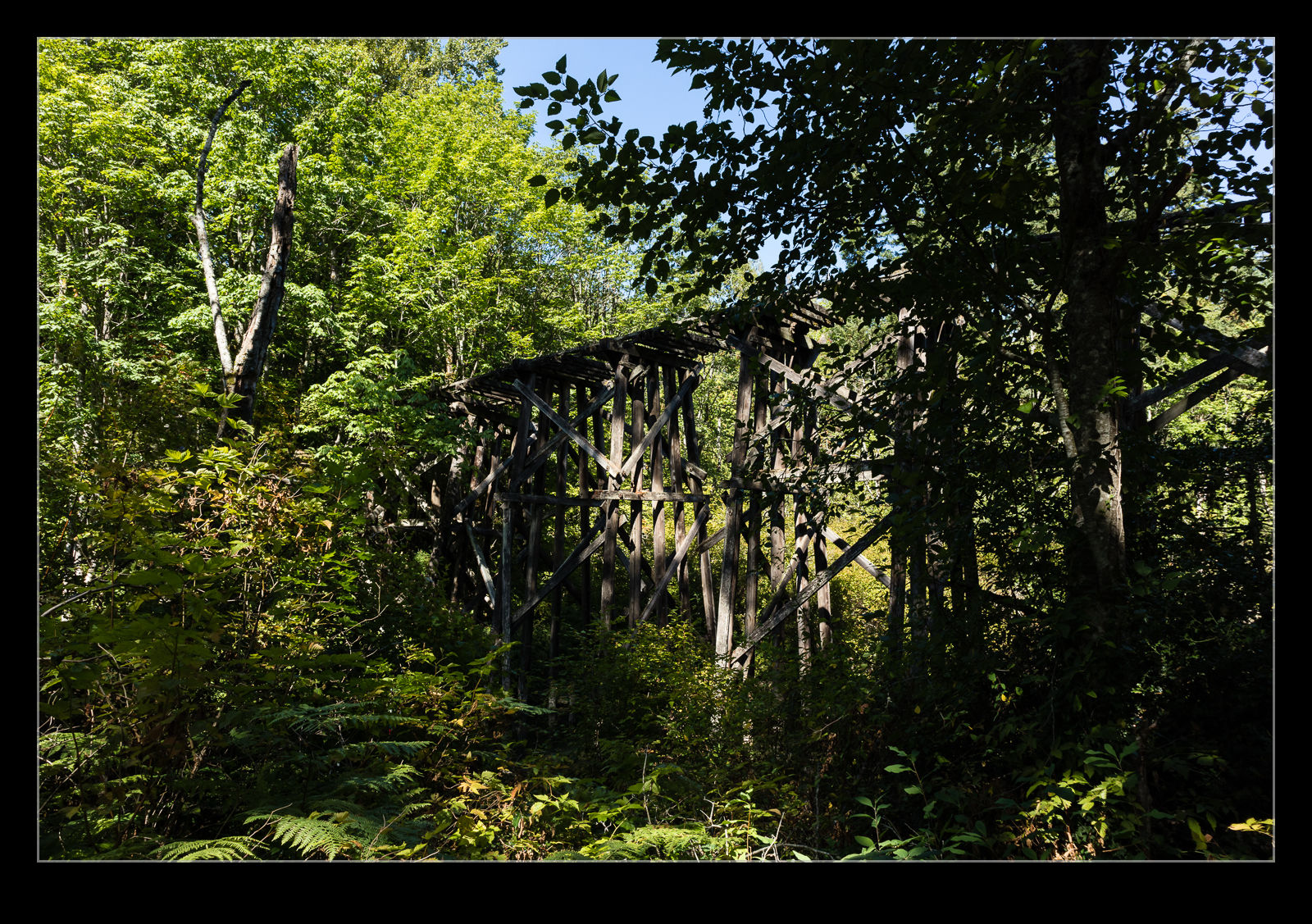 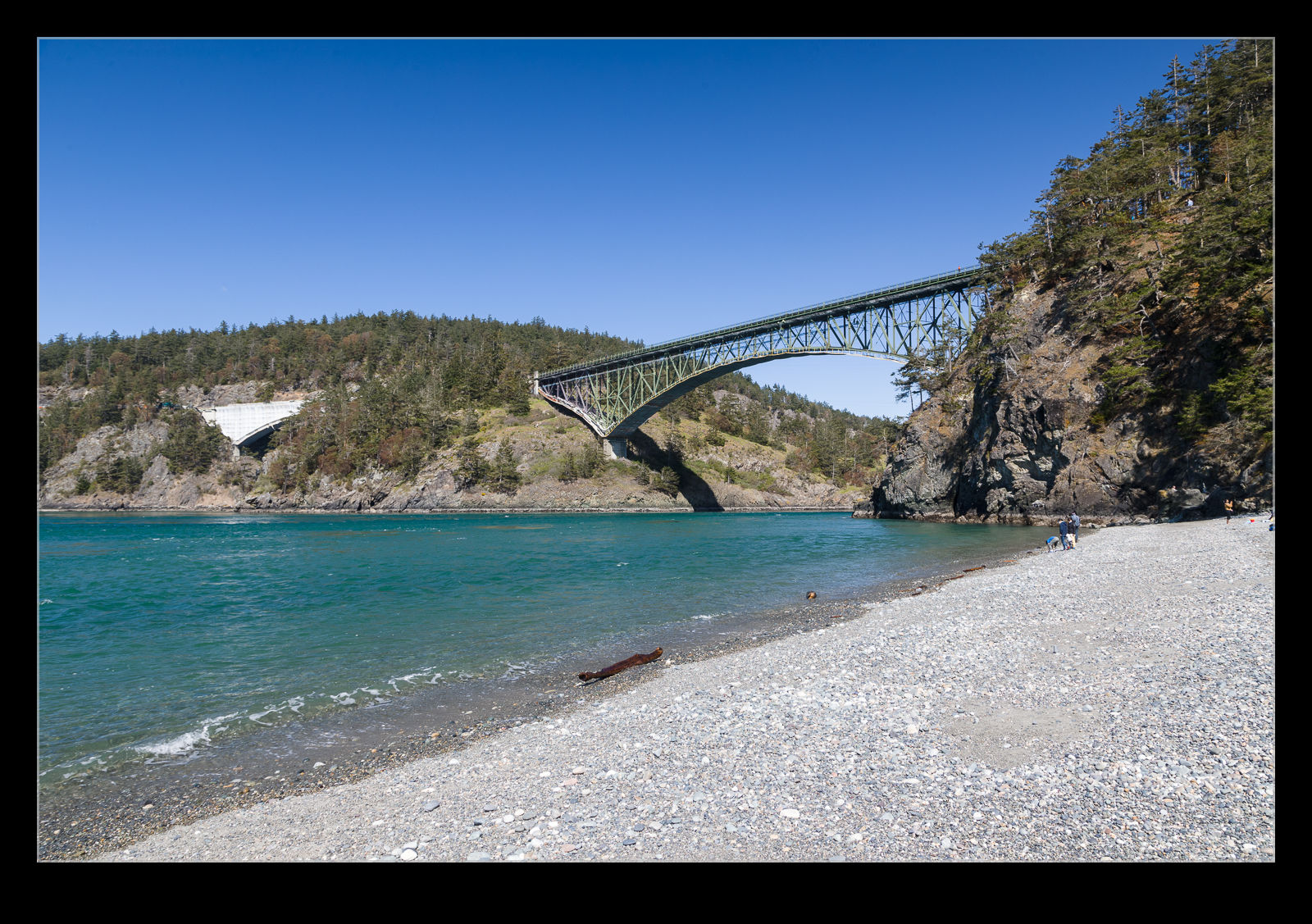 While on our trip to Whidbey, we made a short stop at the North beach in Deception Pass State Park.  This is the beach that is closest to the bridge across the pass.  I was hoping it might be possible to get a nice shot of the bridge but I was disappointed to realize that the maintenance work underway on the bridge has resulted in the structure being covered in a ton of material.  No chance to get anything exciting from that.  If you looked closely, you could make out some of the maintenance team up on the bridge in their hi-viz clothing.  That is not a job for which I would be well suited. 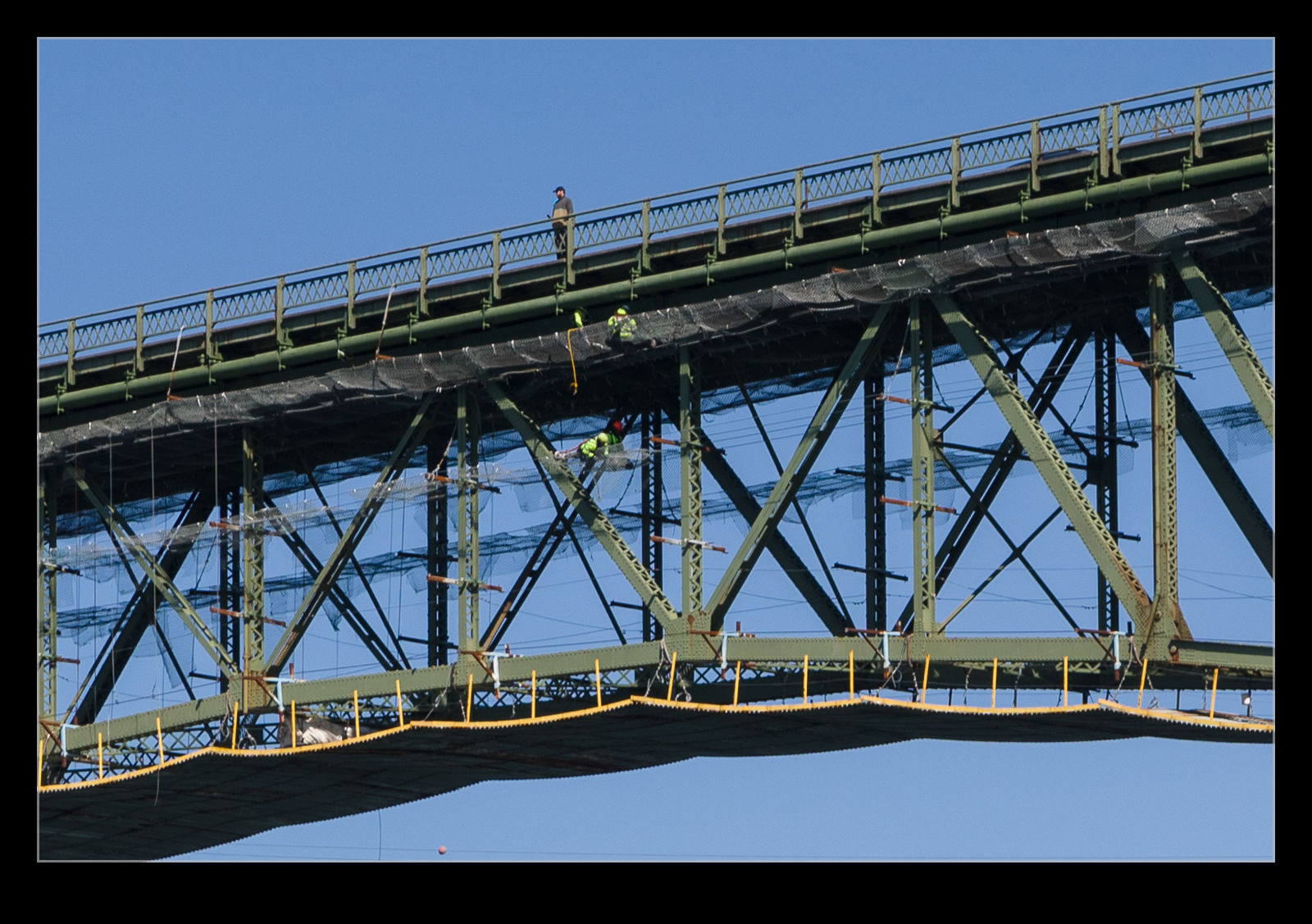 I was driving over the bridge heading towards Anacortes when I glanced down towards the casino near the water.  I noticed a railroad swing bridge across the water which I hadn’t seen before.  Since I was on my own and with no set schedule, I figured I would drop in and take a look.  The railroad runs alongside the casino and crosses the river at an oblique angle.  Consistently, the open position for the bridge is not perpendicular to the track but lies inline with the river. 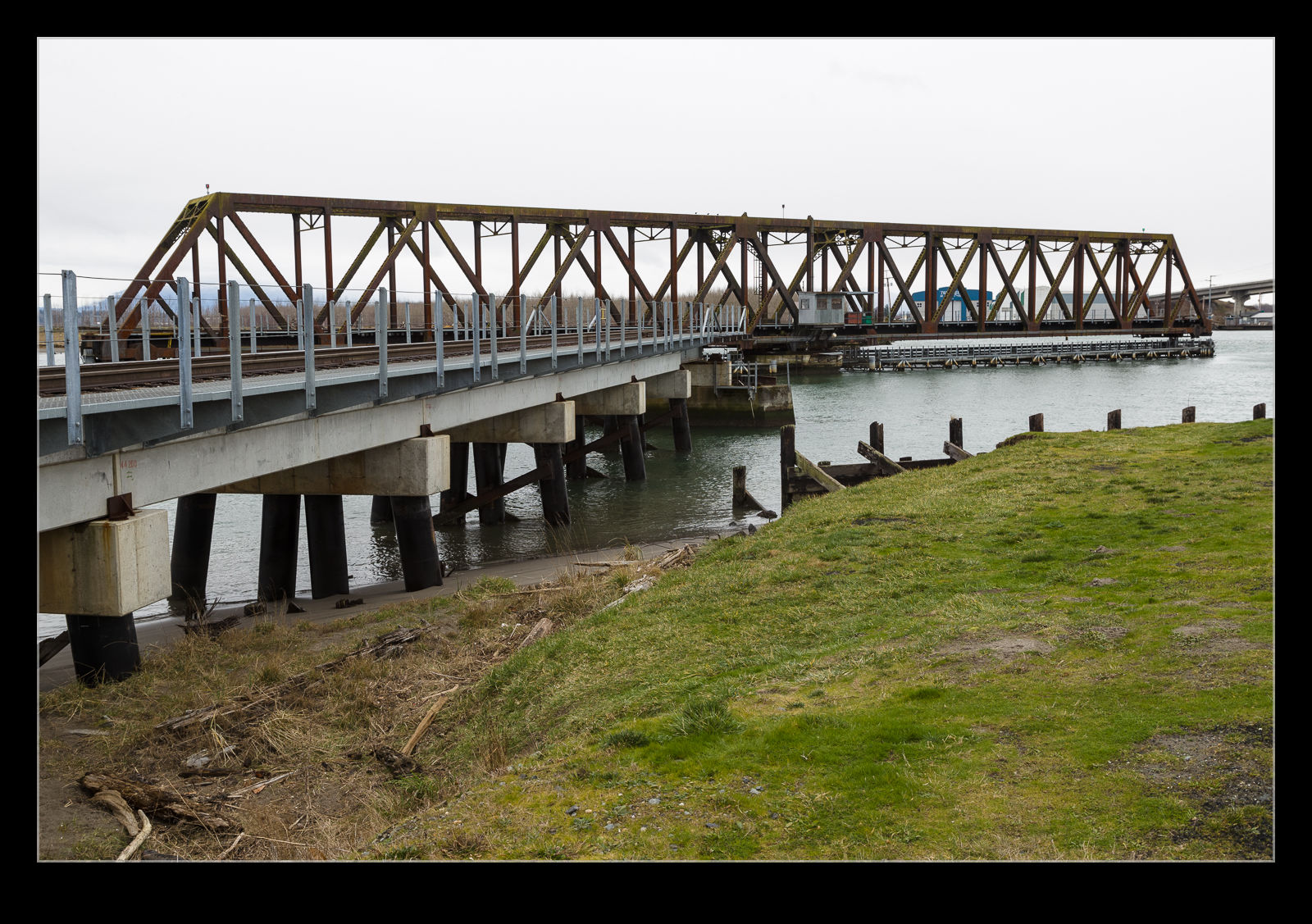 Everything about the track looked in excellent condition so I assume the bridge is regularly used.  I have seen plenty of trains on the track closer to Burlington but didn’t know they came this far.  It would be interesting to see the bridge in use some time.  It is a pretty long structure and the control house is on the opposite side of the river.  A bald eagle was sitting on that side making a lot of noise but too far away to justify a photograph. 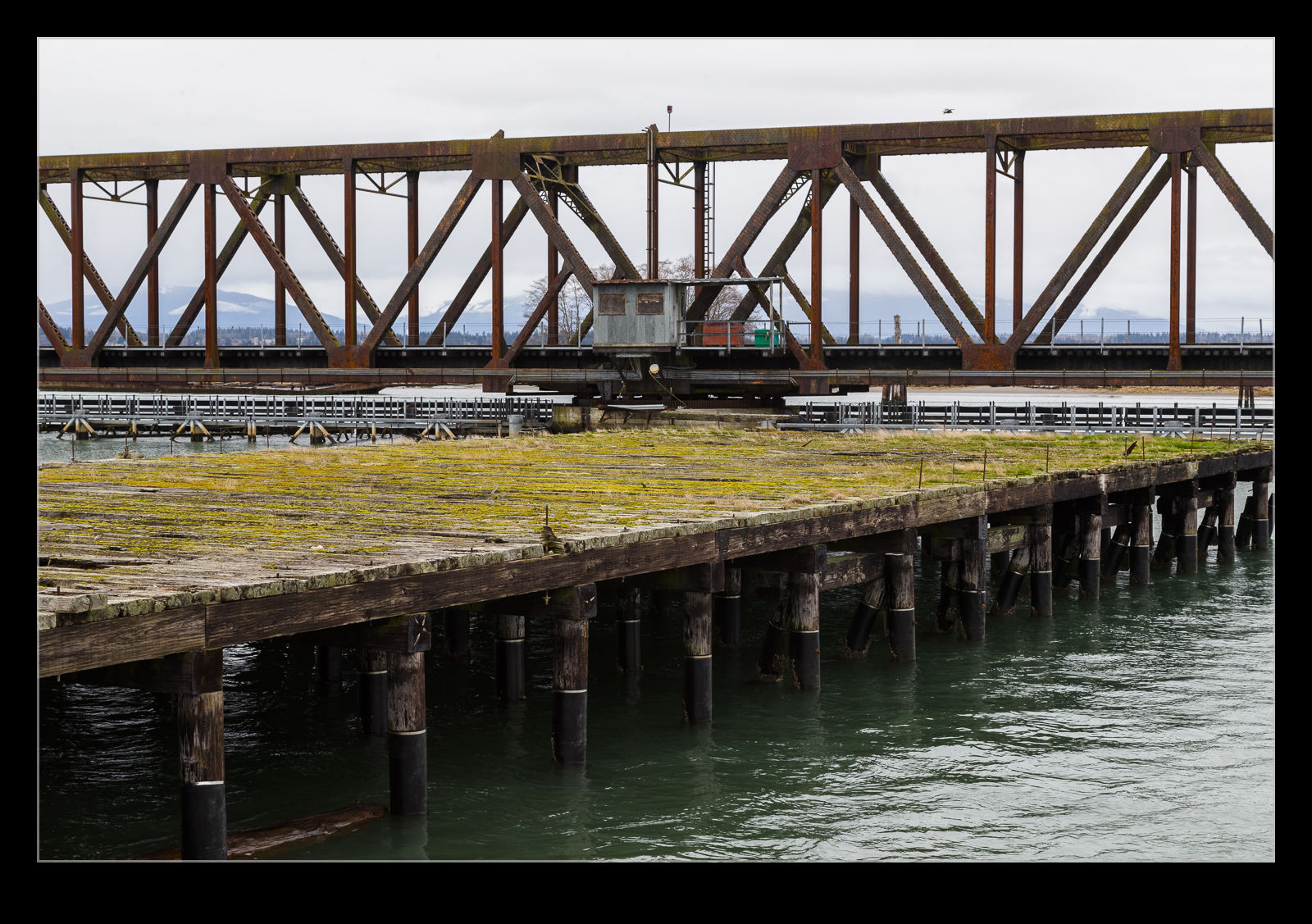 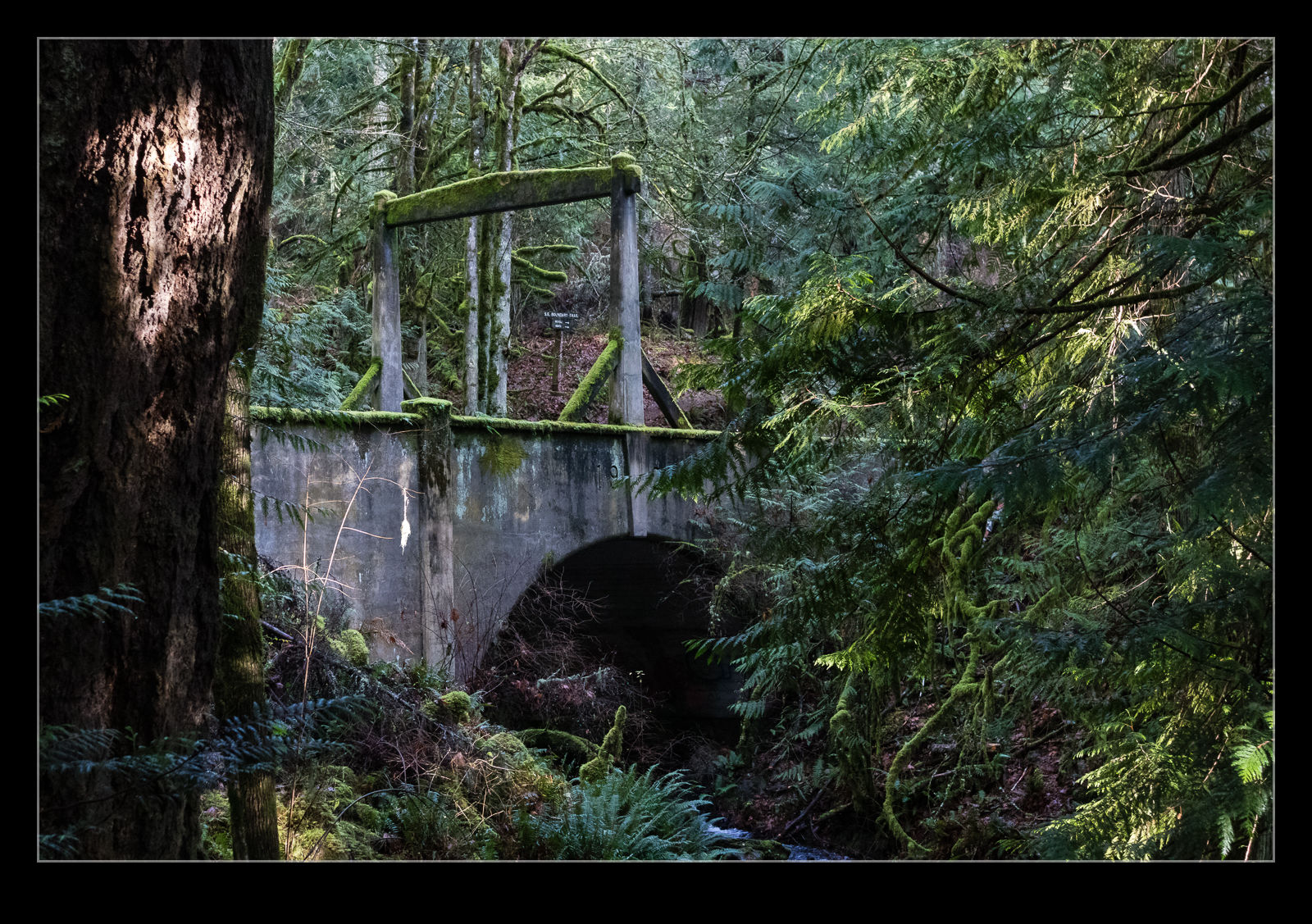 Moran State Park provided a great place for some hiking.  It is a pretty shady and damp environment, though.  As we were heading down one trail, we came to a bridge over the river.  The bridge seemed to have most of its surfaces covered in moss.  The lack of direct light must have made it an ideal location for the moss to thrive. 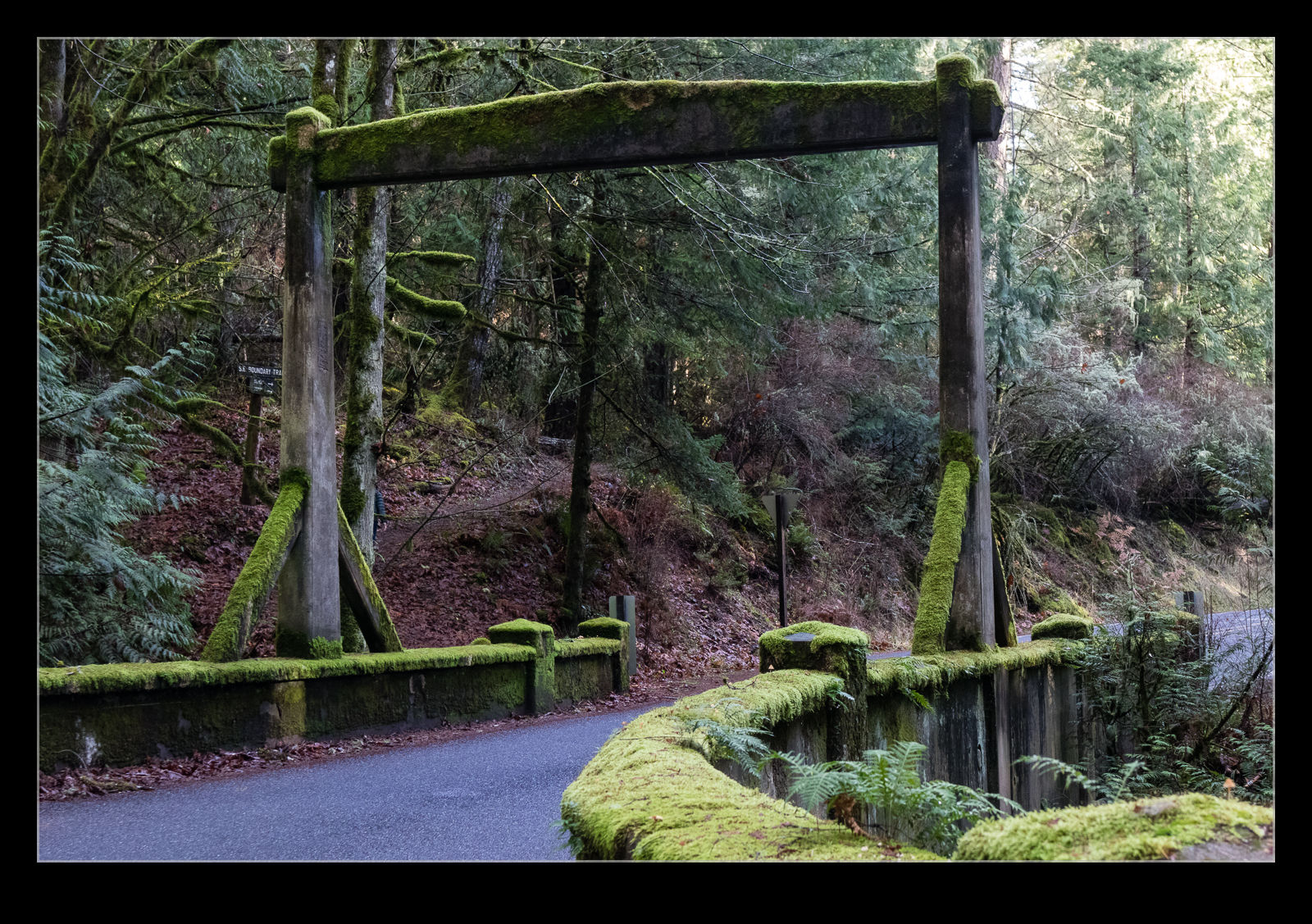 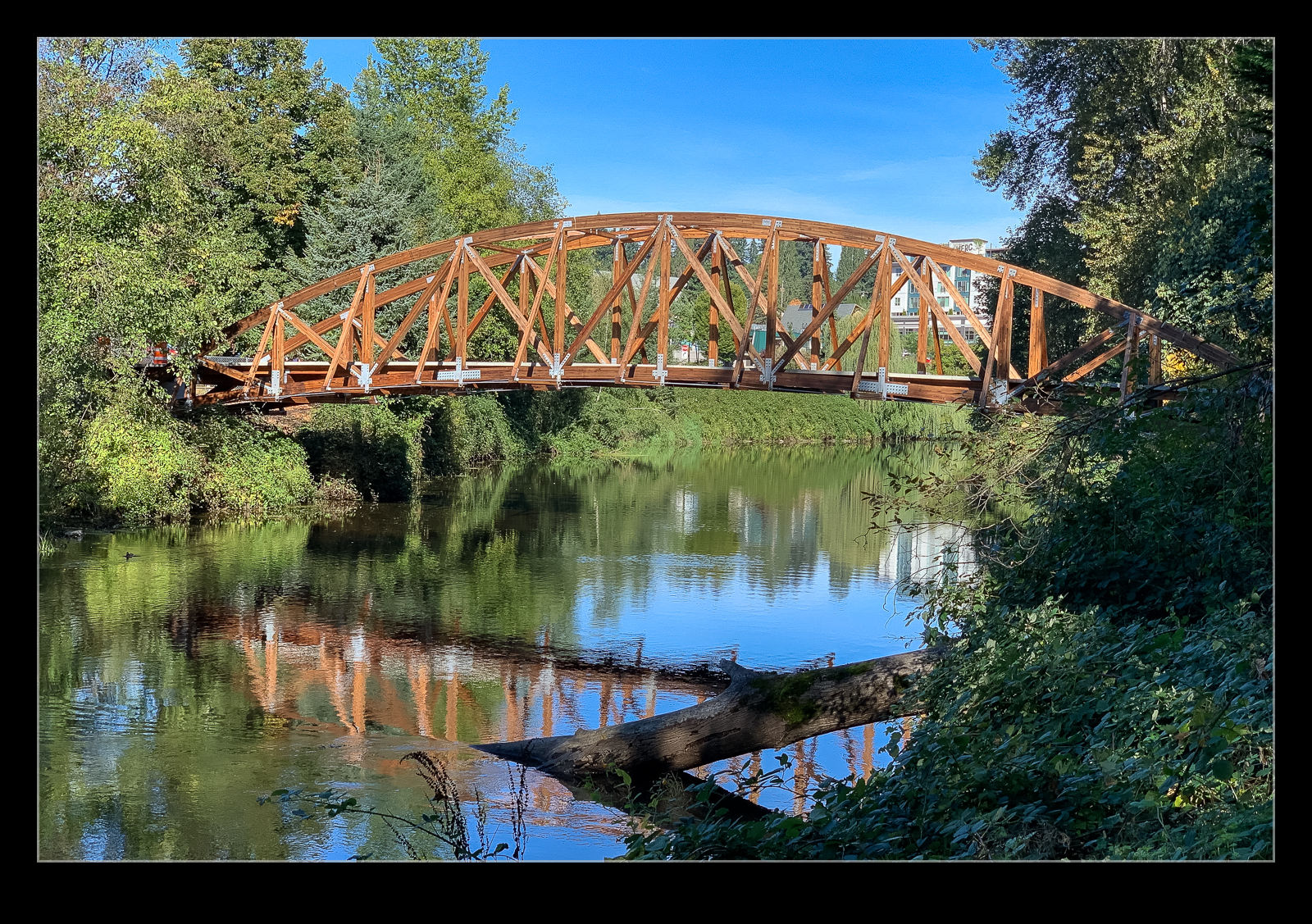 My bike rides along the Sammammish River Trail in recent months have involved a diversion.  Part of the trail passing through Bothell had been shut down.  It took me a while to work out why but, one day, while driving through the town and past the park, I saw a new bridge structure sitting in the park awaiting installation.  The old bridge had been pretty steep and unwelcoming so this was a positive change. 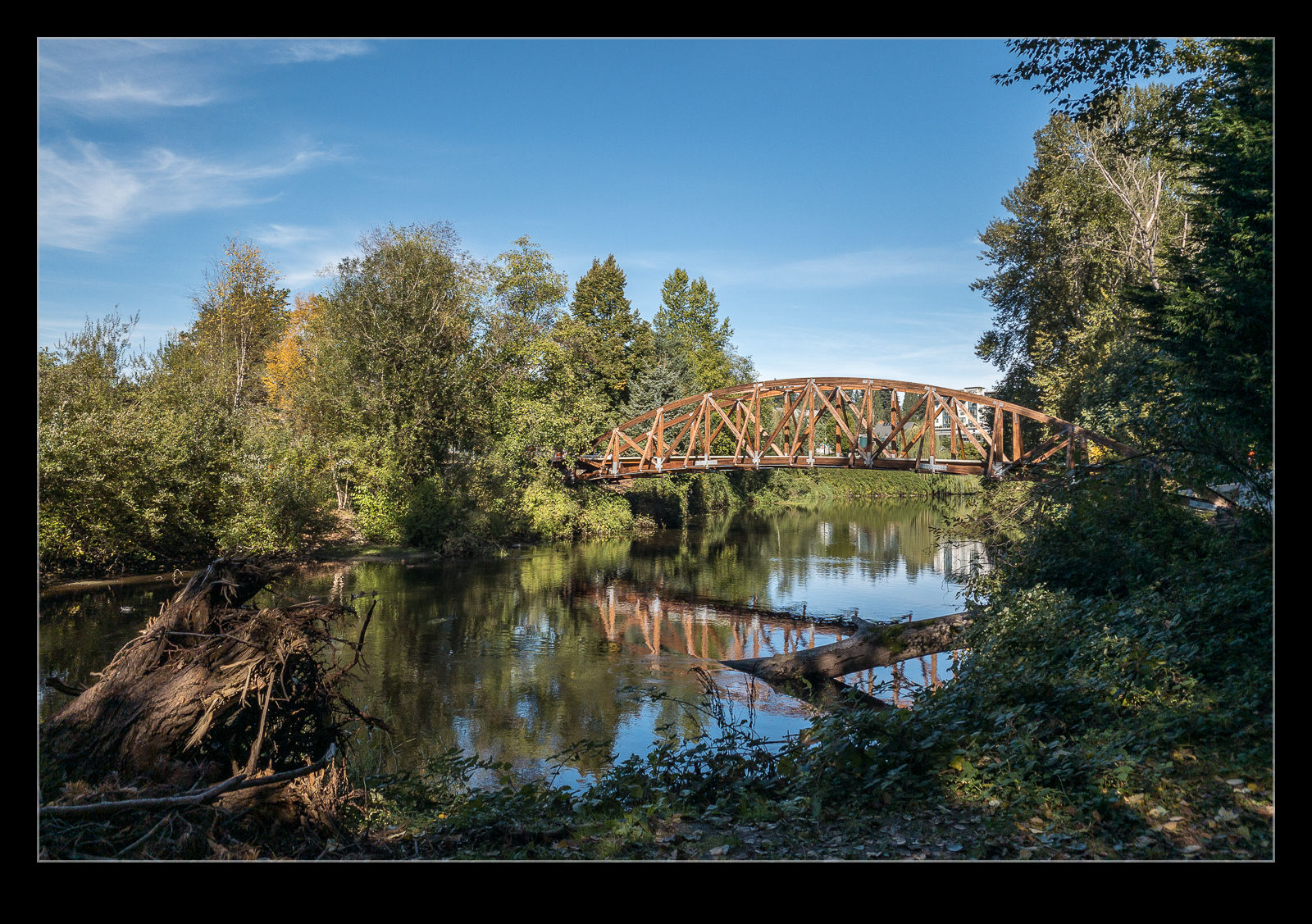 I would really have liked to have been around when the new bridge was installed but I didn’t know about it until it had been done and that I found from the trail reopening.  The bridge is not yet open for foot and bike traffic as they finalize the installations at each end but it certainly looks nice and I stopped on a recent ride to get a couple of shots of it.  Hopefully it will be open soon. 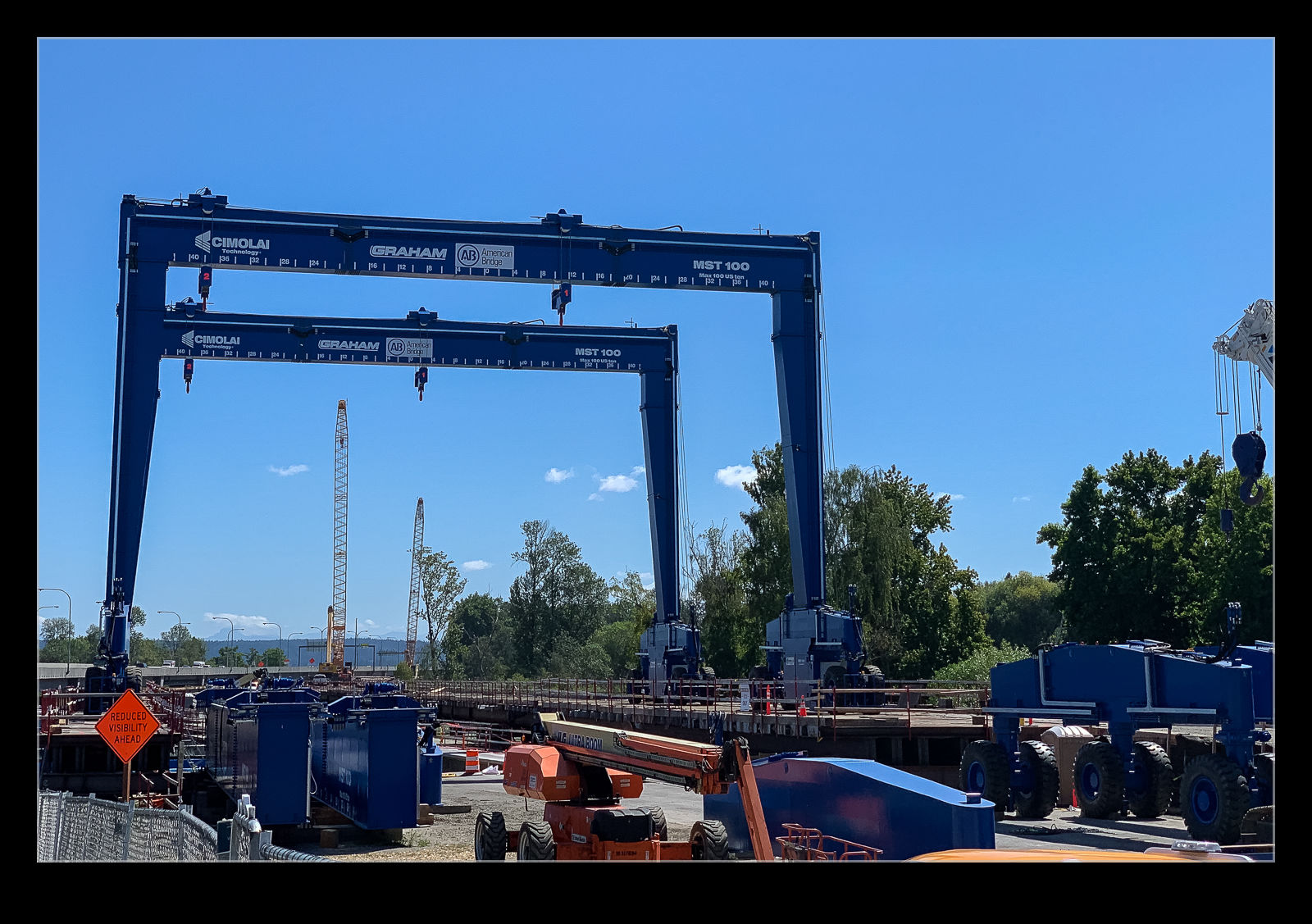 The replacement of the SR520 bridge across Lake Washington is being undertaken in stages.  The main floating bridge element has been completed and now they are working on the next section through to Portage Bay.  Traffic from the old lower eastbound section has been diverted up on to the new westbound section while a new eastbound bridge is built.  Driving across the bridge you get to see some serious construction hardware.  However, you can’t photograph it while driving. 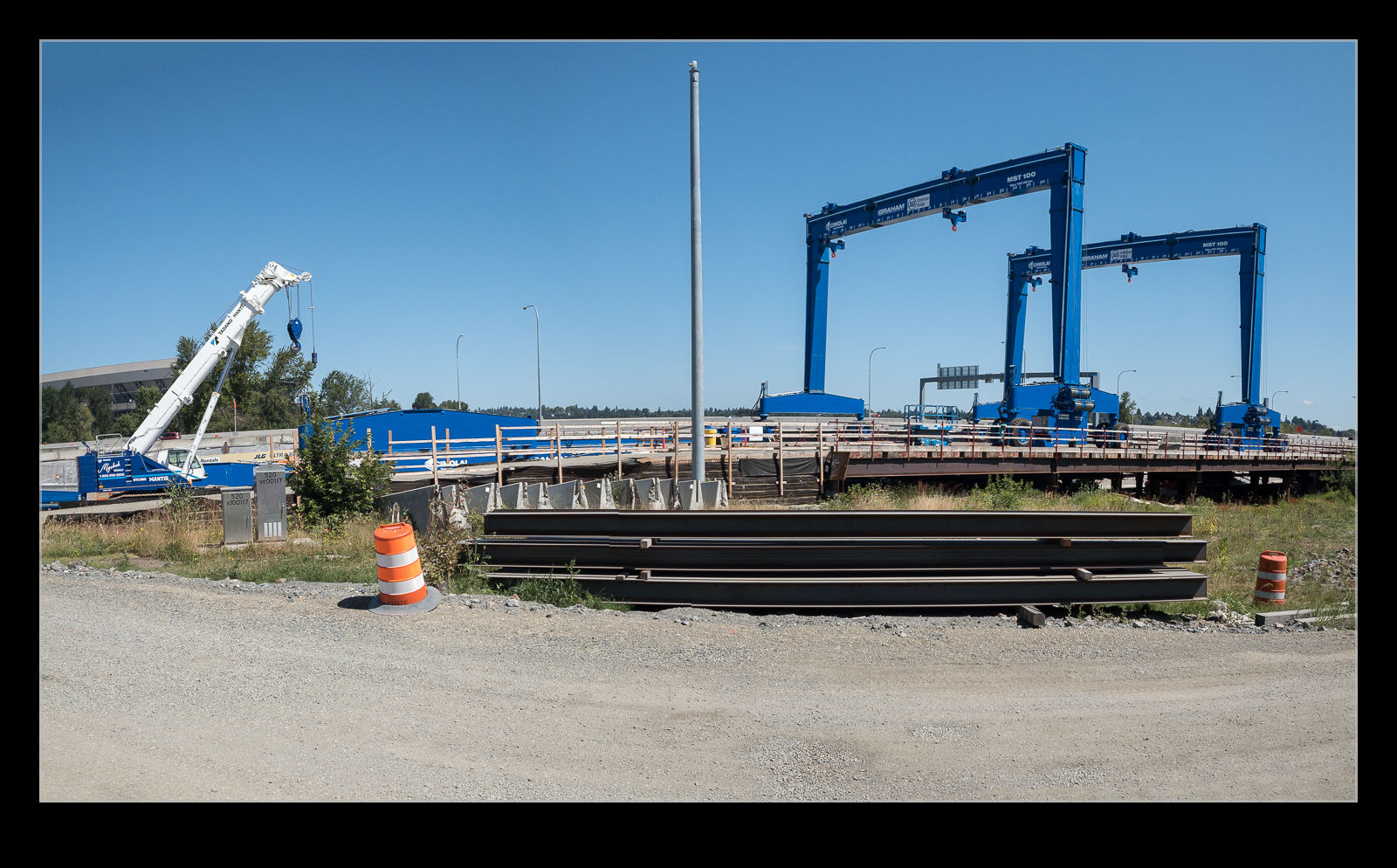 A bike ride took alongside the construction site so I was able to stop and get some photos with my phone.  The large lifting structures are actually running on top of a temporary bridge built just for them.  These will lift the new bridge sections in to place and allow the construction of the new eastbound section to be done.  I’m not sure of the schedule for completion of this work but, once it is done, it will just leave the last phase to I-5 to be done. 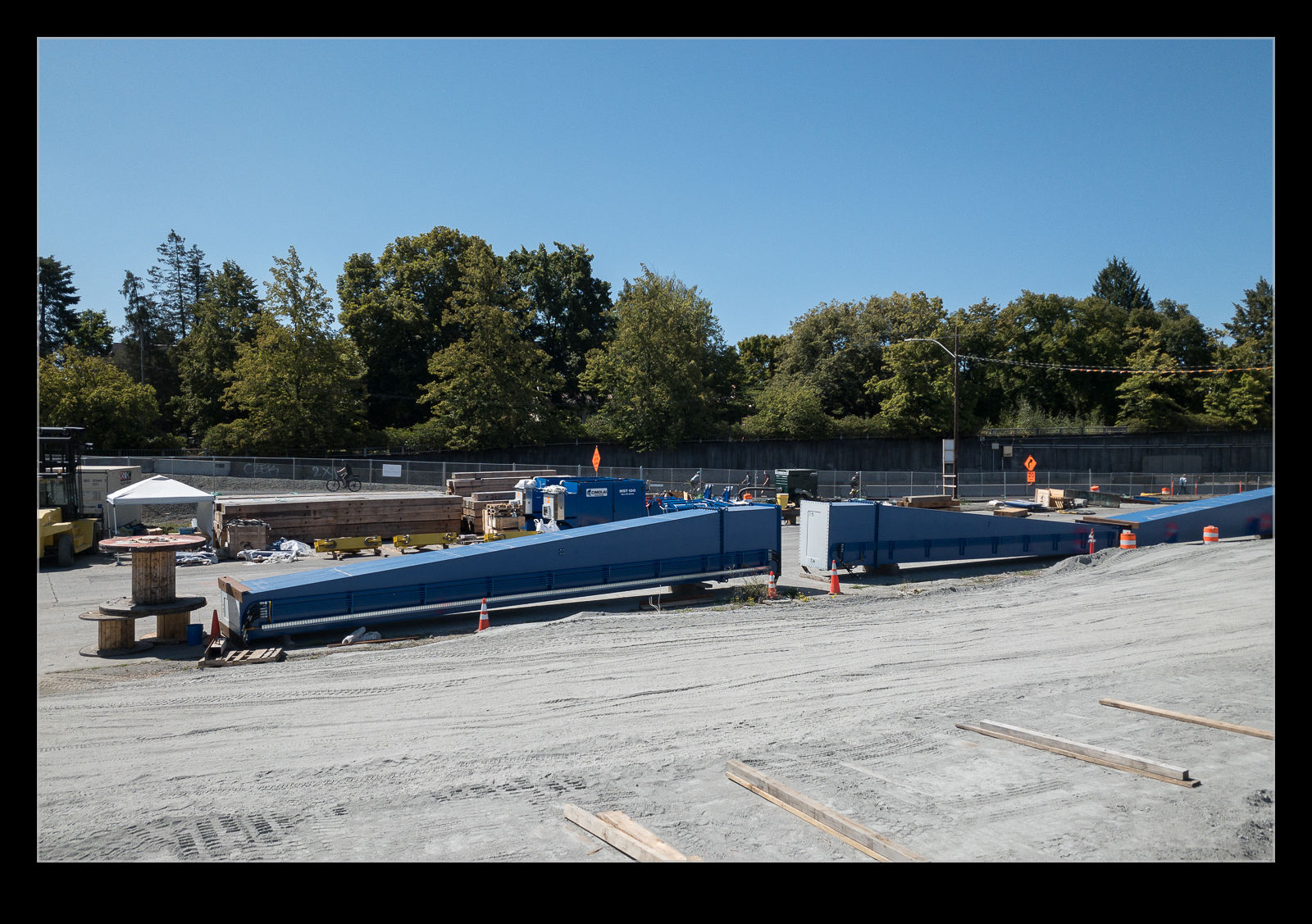 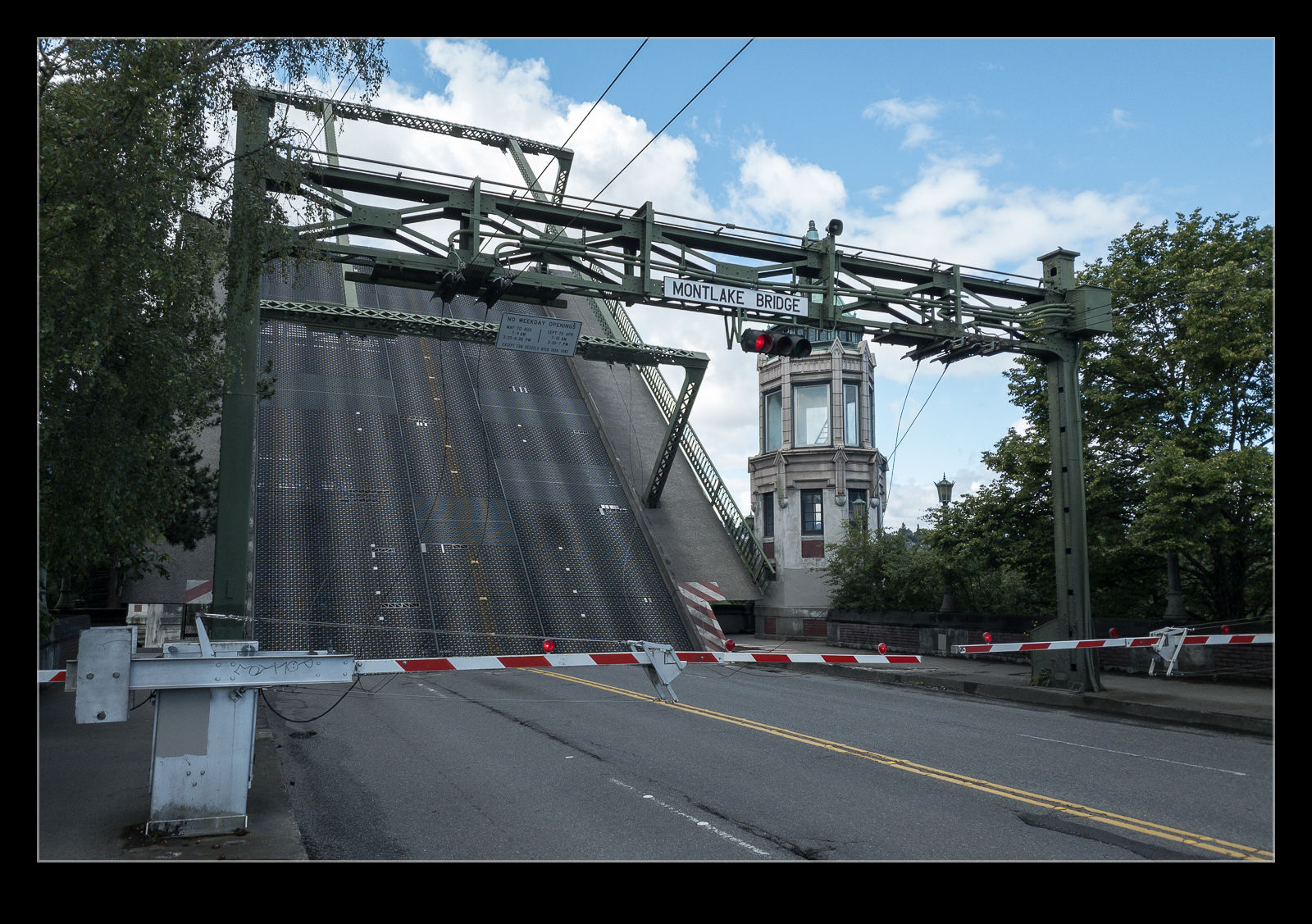 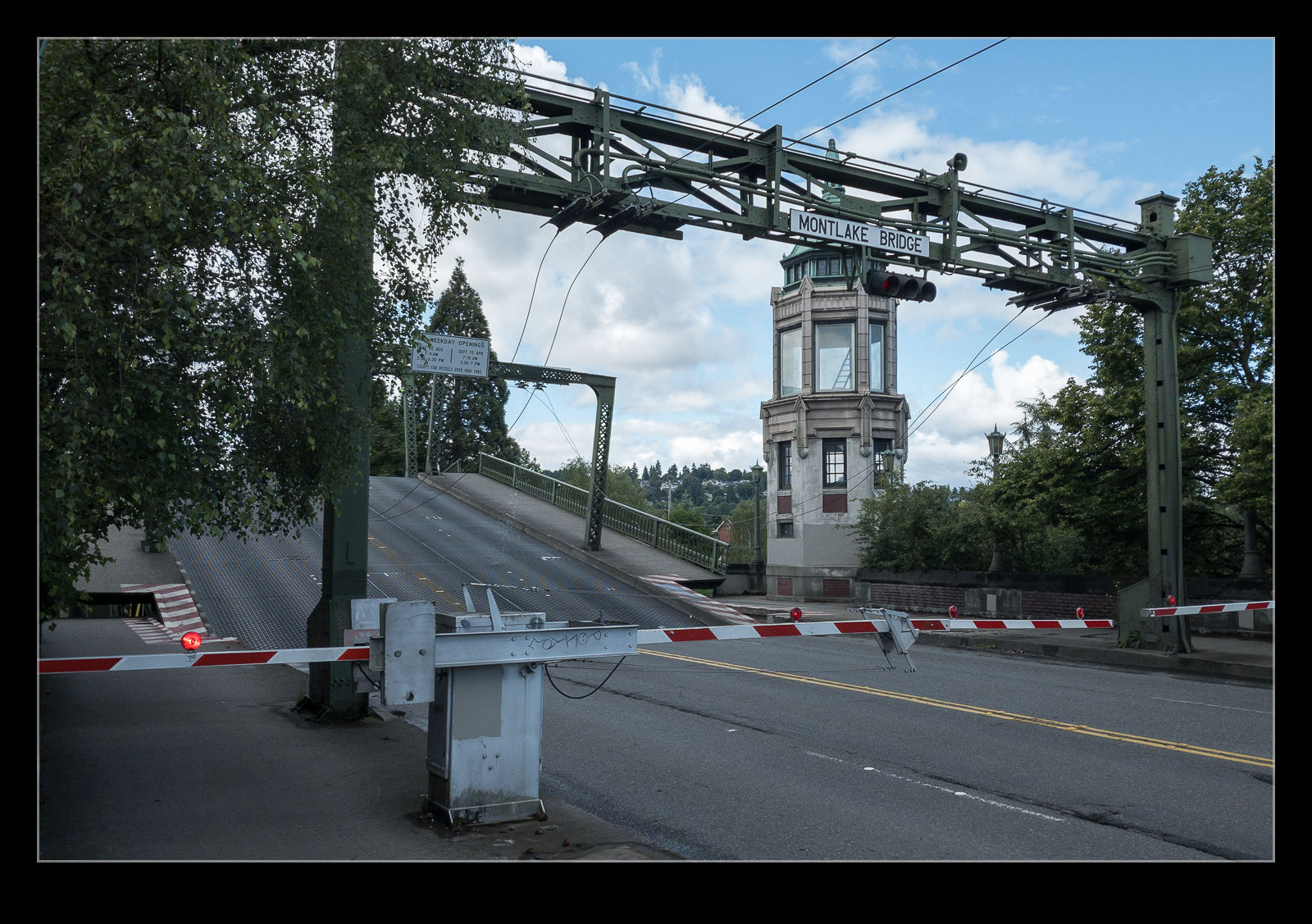