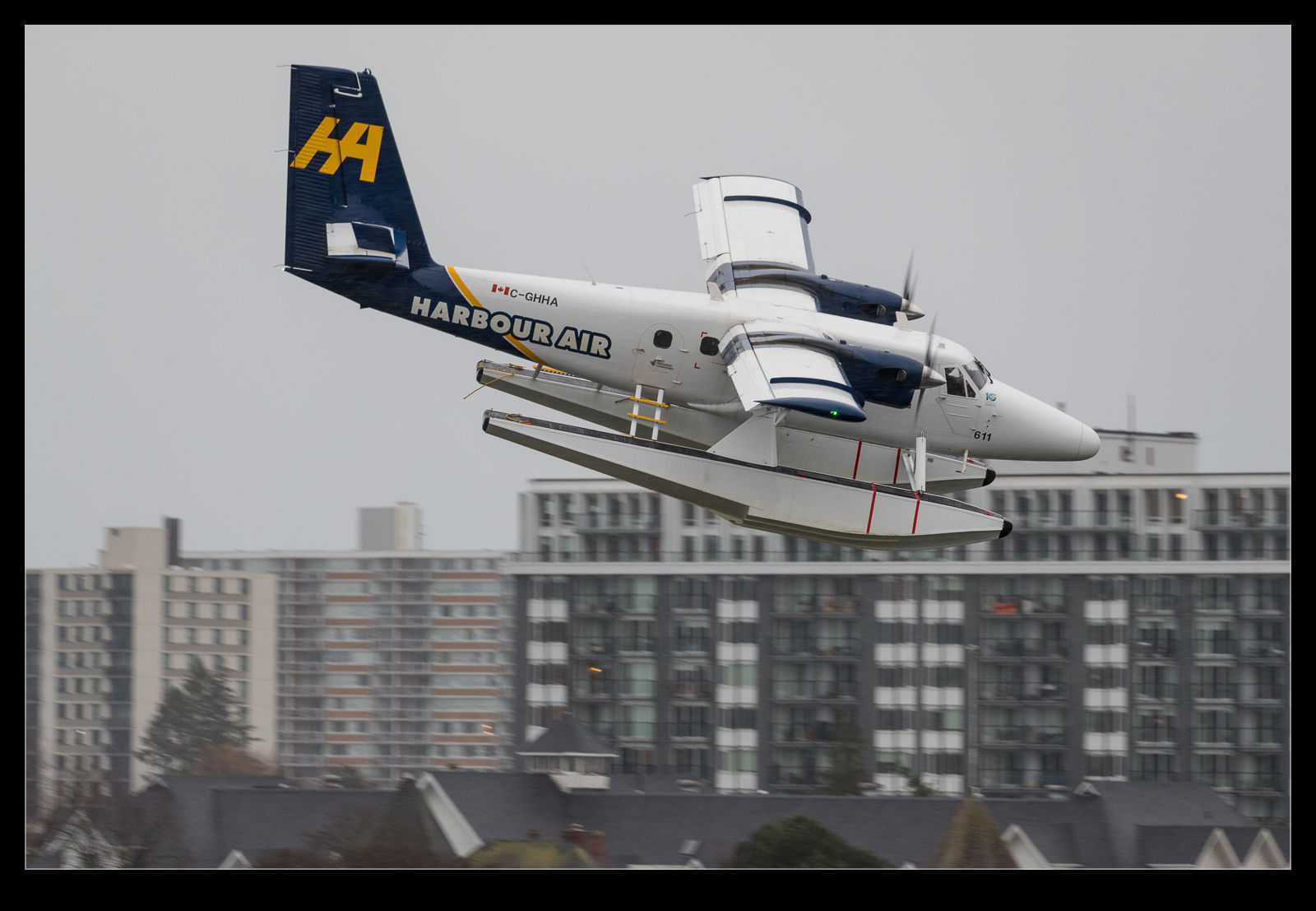 I may have complained a little about the weather being damp and windy during our trip to Victoria but there was one upside to this.  Unfortunately, it took one missed opportunity before I realized.  The wind was strong and from the west.  The normal approach for Harbour Air is to come in through the opening to the harbor and then touch down in the outer area before taxiing into the Inner Harbour.  With the wind coming from the opposite direction, they reversed the flow. 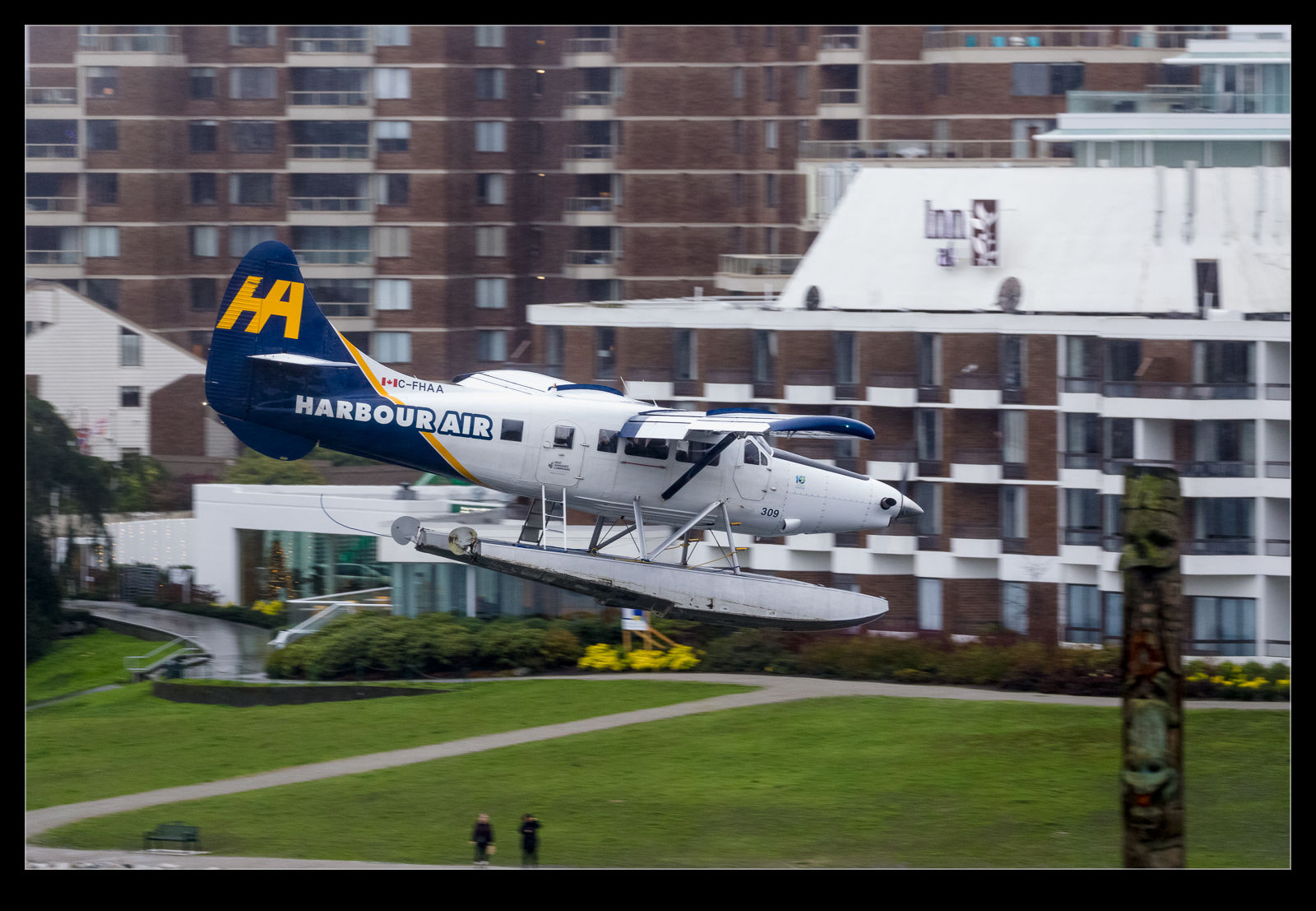 I had seen this once before on a previous visit to Victoria many years ago and had forgotten it could happen.  Our hotel was located right on the corner of the shoreline around which the planes would approach and we had a view out of our (not huge) window as they came around to touch down.  The first time I realized I could get the shot, I had to make so with shooting through the window.  This does not do much for image quality but it was still okay and I got an Otter coming in. 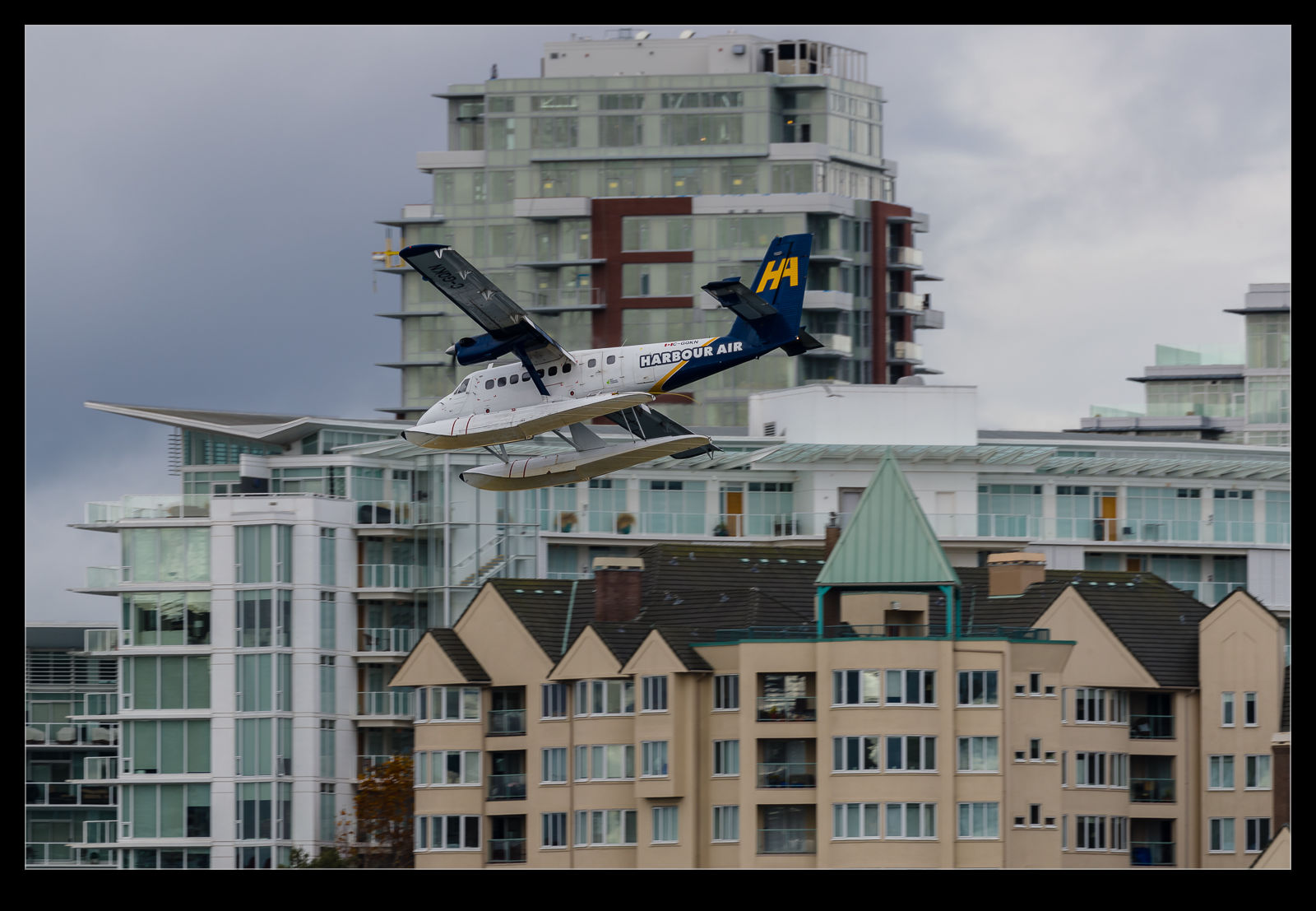 The next time something was due, I planned ahead.  The window of our room did open but it only opened a very small amount.  Not enough to get a camera out of except when looking off to one side.  However, the restriction on opening was the result of a small screw that was in the track for the window and it was not very securely fastened.  With my fingertip, I was able to remove the screw and with that out of the way, the window could fully open.  A Twin Otter was on the way so this time I was ready to get a clearer shot.  There is plenty of warning of their arrival because the sound of the props reaches you long before the plane does.  Besides, they are on final approach so hardly going too fast.  The only downside to this shot is that the touchdown location is further around and out of sight of where we were.  Bad weather can have its benefits. 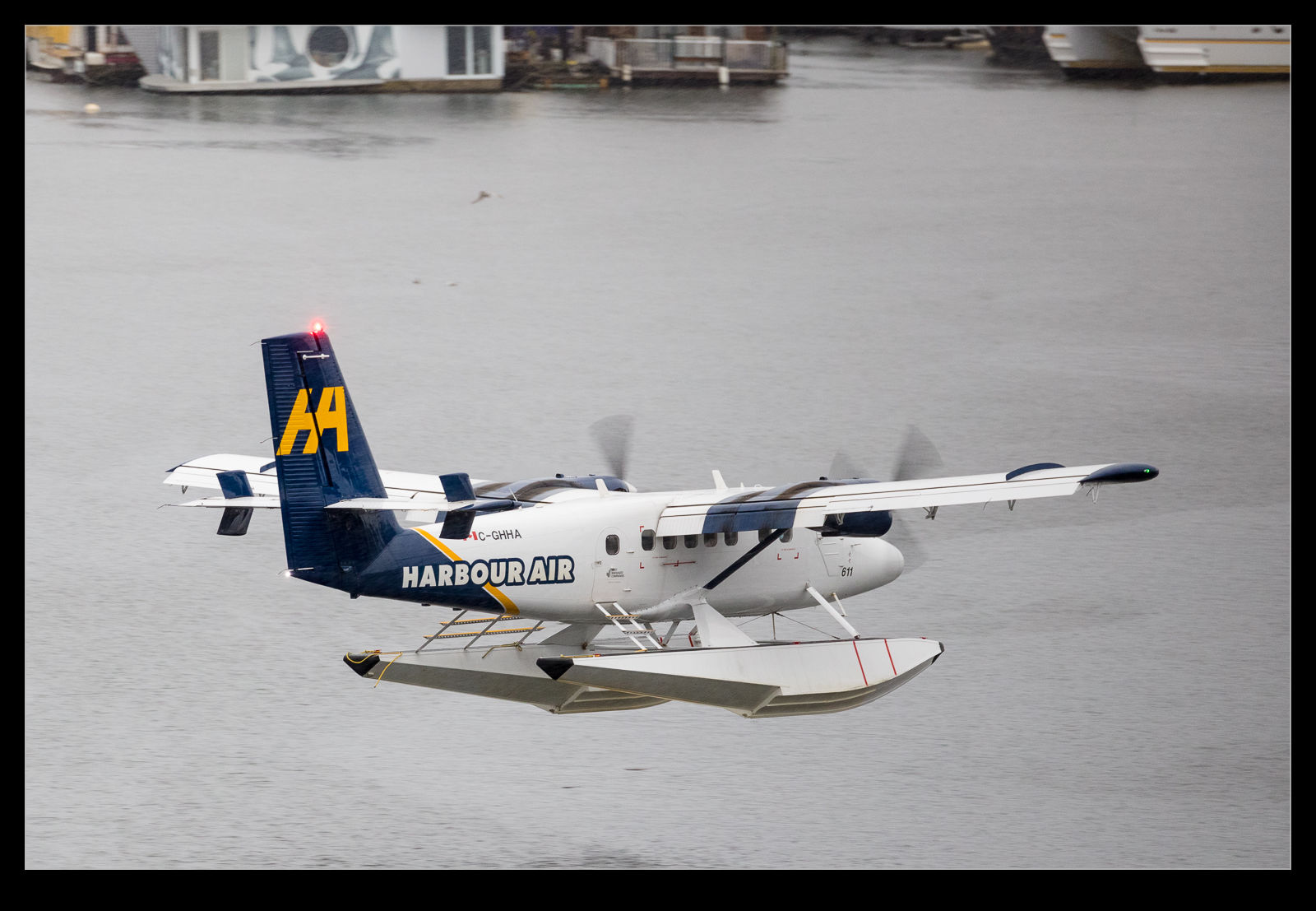 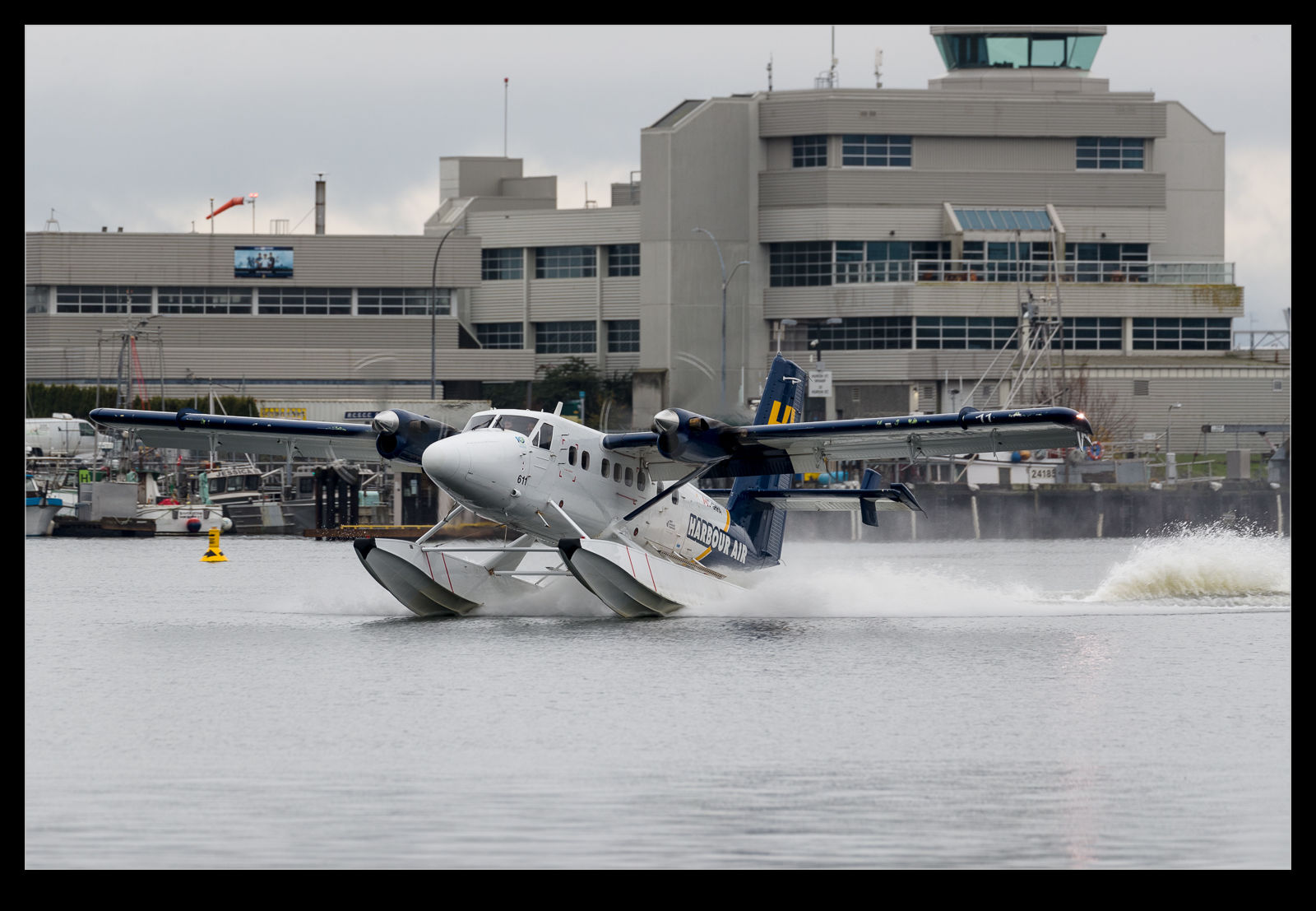 I had a bit of time one morning during our Victoria stay to walk along the shoreline.  The hotel that we were staying in was right on the shore so I only had to step outside and then I could walk around to the more open are of the harbor.  This also meant I could get some shots of the Harbour Air operations.  Their floatplane base is in the Inner Harbour area but the planes taxi out to the outer areas for departure. 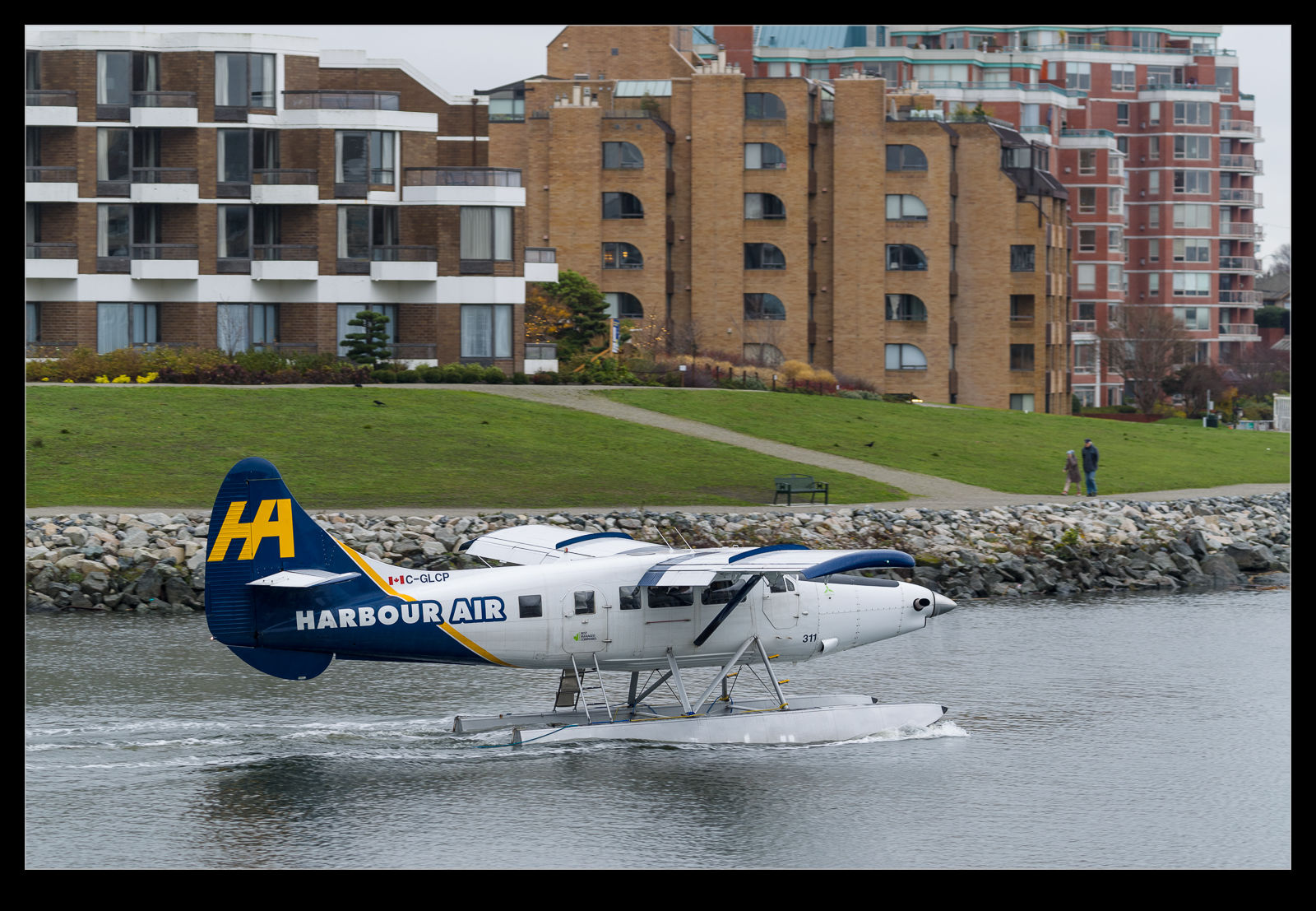 I was able to get some shots of arrivals and departures as well as taxiing planes.  Some of those I could shoot from our hotel window when I wanted to stay dry!  I was happy to shoot the Otter movements but I was more interested in the Twin Otters.  We have plenty of Otters around here with Kenmore but Twin Otters are not common down here so some variety was welcome.  Besides, it is a bigger plane so a little easier to shoot at a distance! 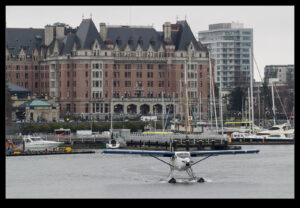 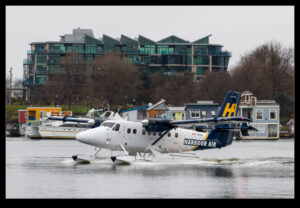 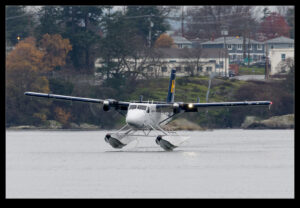 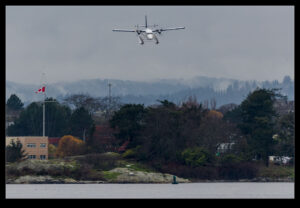 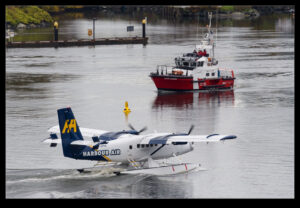 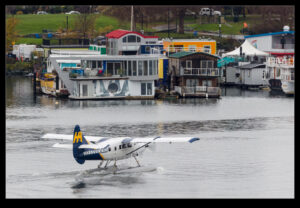 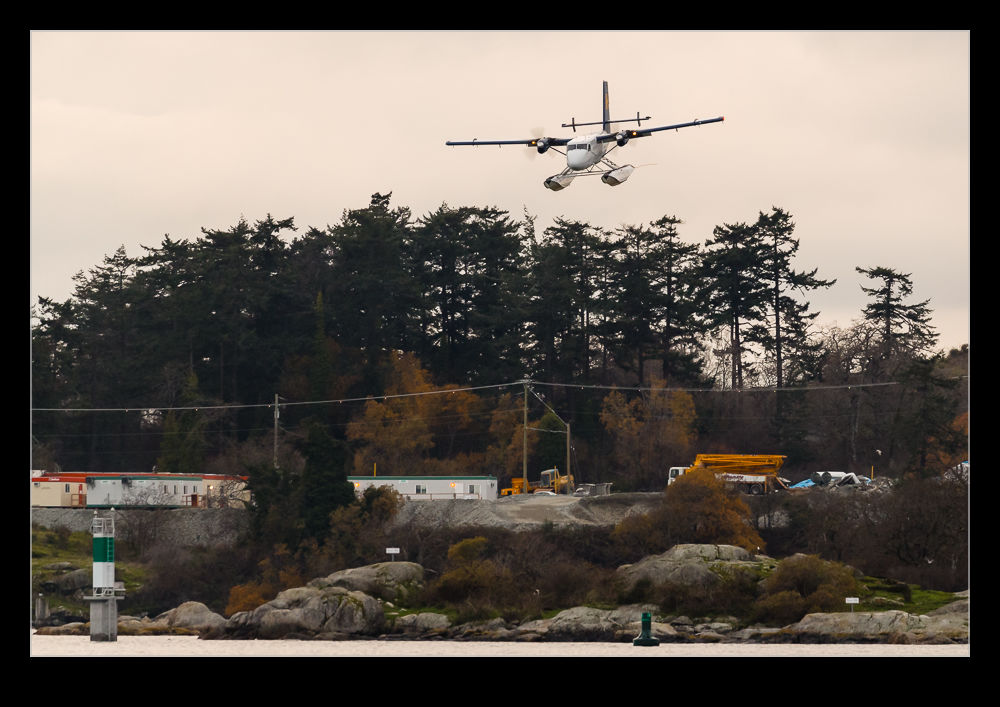 I walked along the harbour shoreline in Victoria to go and see some of the floatplanes in operation.  The planes have to take off and “land” in the outer area of the harbour so they are a bit away from the easiest spots to watch things from when they are most active.  I saw a couple of planes making their approach.  They came in through the entrance to the harbour before making the turn to line up for landing.  A nice arc to final approach and then touching down to be at water taxi speed by the time the entered the restricted area of the harbour itself.  Fun to watch and I could have spent plenty of time there on a sunny afternoon! 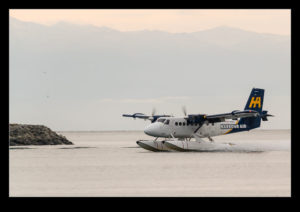 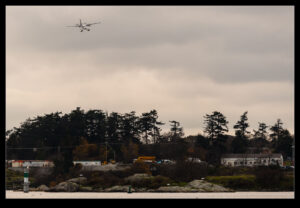 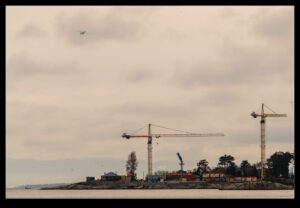 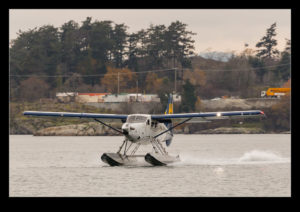 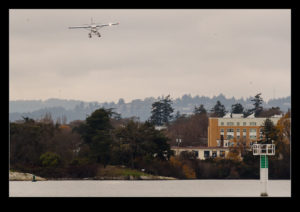 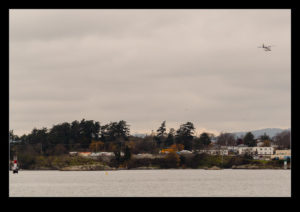 Often the floatplanes will come in to Victoria Harbour through the entrance to the harbor, touch down on the water and continue straight in to the base.  However, if the wind is in the opposite direction, they sometimes make their approach across the city and the harbor itself.  While we were there, I saw one Twin Otter coming in this direction.  It made its final turn with the large hotel and apartment buildings behind it which made for a shot with more context than would otherwise be the case. 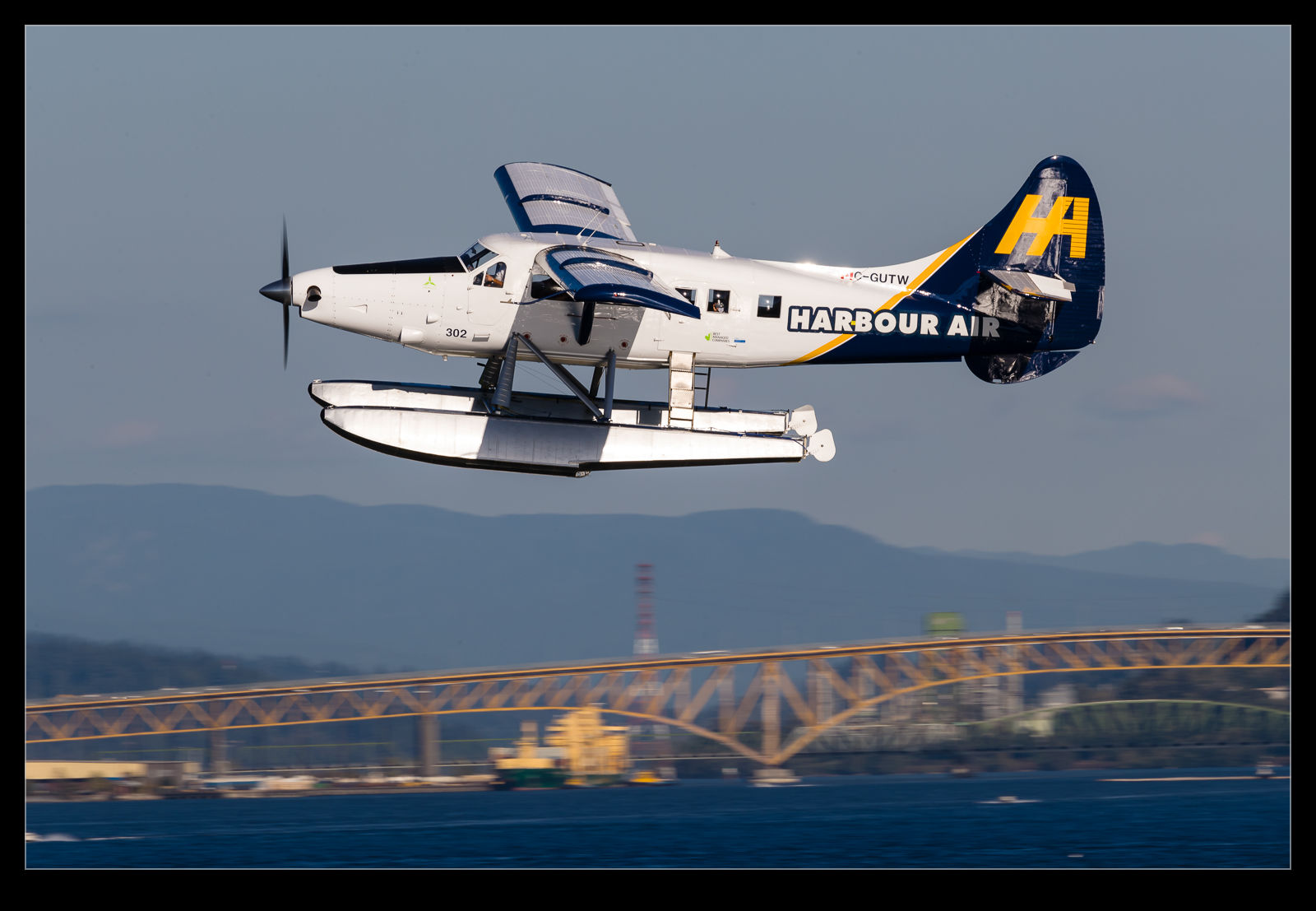 I was in Vancouver for a few days for work and I managed to catch up with my buddy Mark when I arrived.  He suggested to me a good opportunity for shooting the floatplanes is at the end of the day from Brockton Point in Stanley Park.  I had only shot them from the shore near the convention center (other than an opportunist shot or two while walking in the park and that doesn’t count) so I was interested to see how this location worked out.  I managed to get out of work at a good time one evening and the weather was looking very nice so it was off to the park for me. 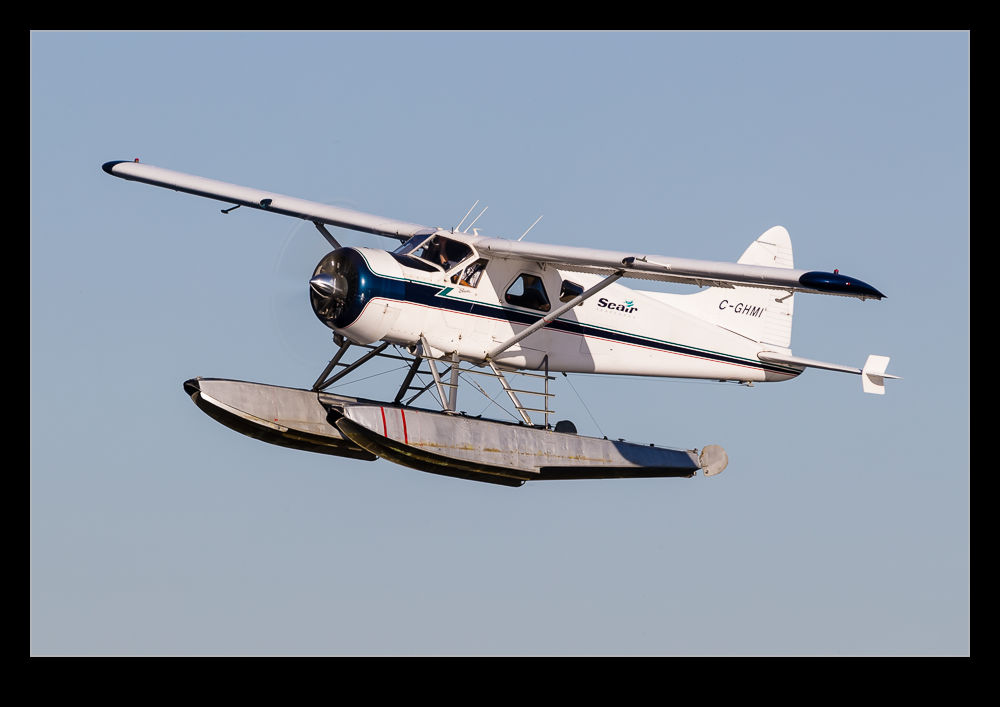 This location is a lot of fun.  In the evening, the light is well positioned and, at this time of year, the sun is lower and the light is nice and just gets better and better as the evening sets in.  The aircraft were arriving from the east so they were very distant but it is the departures that we were after.  The planes head along the shore from the base and then turn towards you and start their run.  Often, they are pointing straight at you for a while. 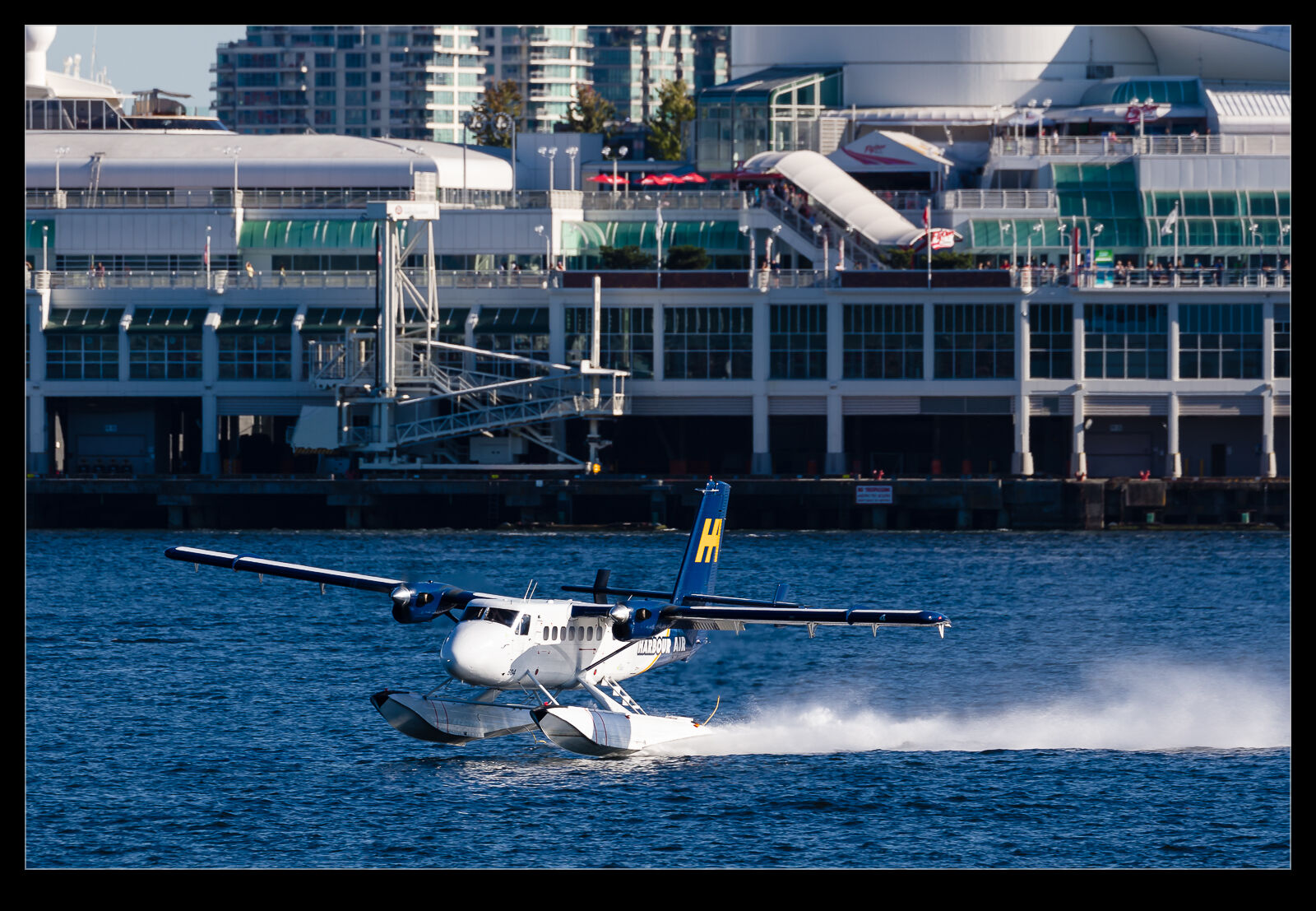 Depending on the type and the pilot, they can climb steeply or can keep it nice and low as they come by.  Sometimes, there might be a boat on their preferred take off run and, since they have to divert to one side which can result in a nice turn back towards you as they round the point and head to Lion’s Gate.  The Otters are the most common type with the Beavers coming second.  There are still some Twin Otters but they are a lot less common than they used to be so they end up being more interesting when they show up.  How can it be that I get complacent about seeing Otters on floats?  (The fact we have them in Seattle too probably doesn’t help!) 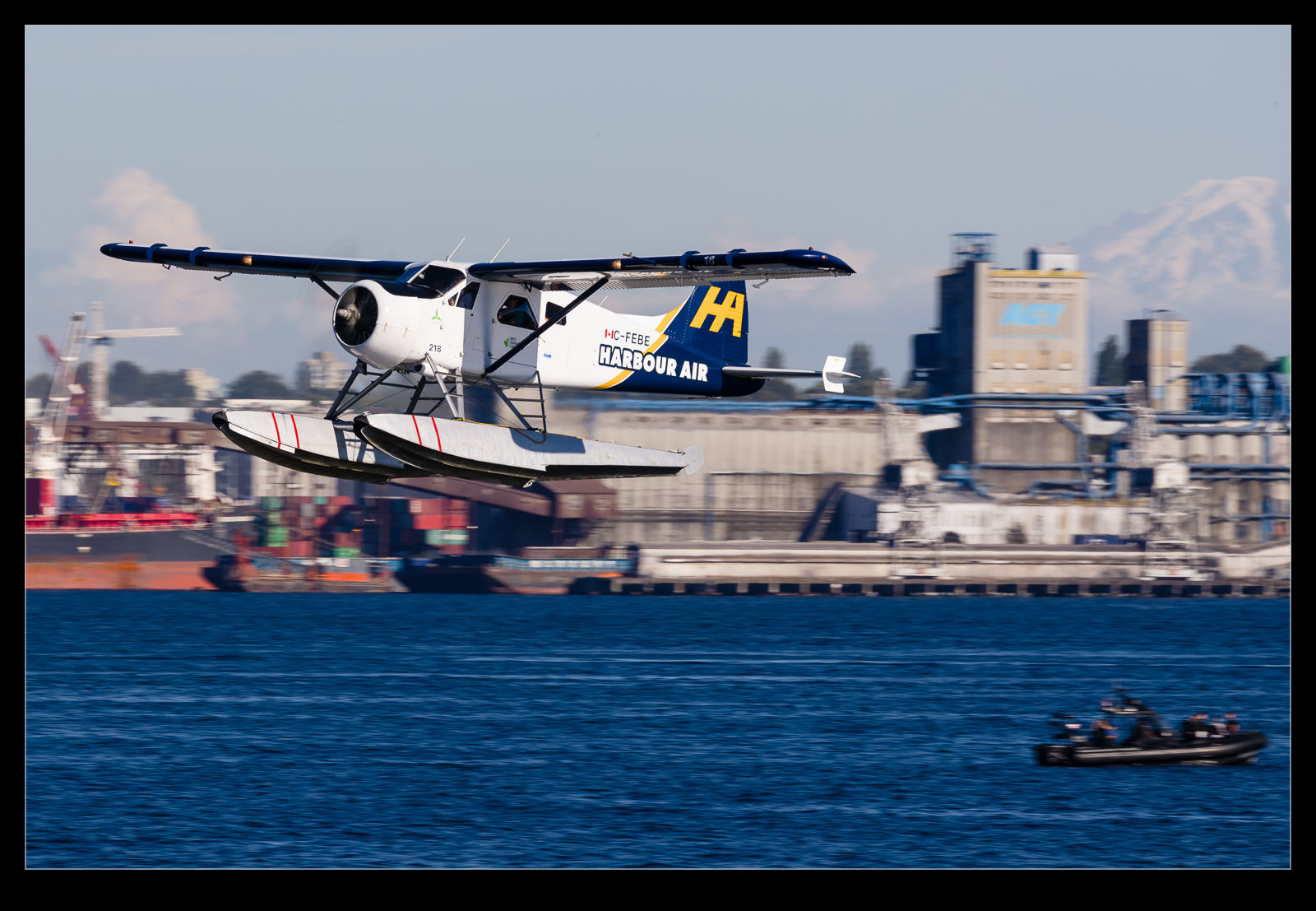 Mark certainly called this one correctly.  Brockton Point is a nice place to hang out on a sunny fall evening in any circumstances but the addition of a steady stream of floatplanes to this makes for a wonderful combination is you are someone like me.  What’s more, it is a reliable option.  Until the winter light stops flying at the end of the afternoon, you have scheduled departures to rely on so this is not a case of turning up in the hope of seeing something.  You will definitely get plenty of planes. 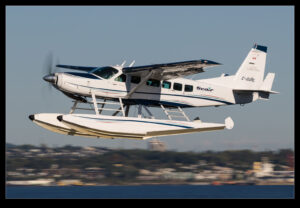 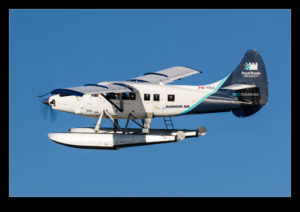 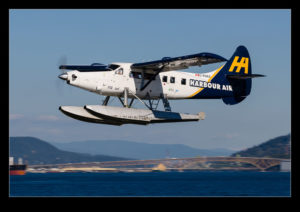 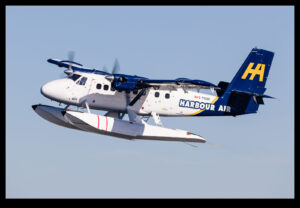 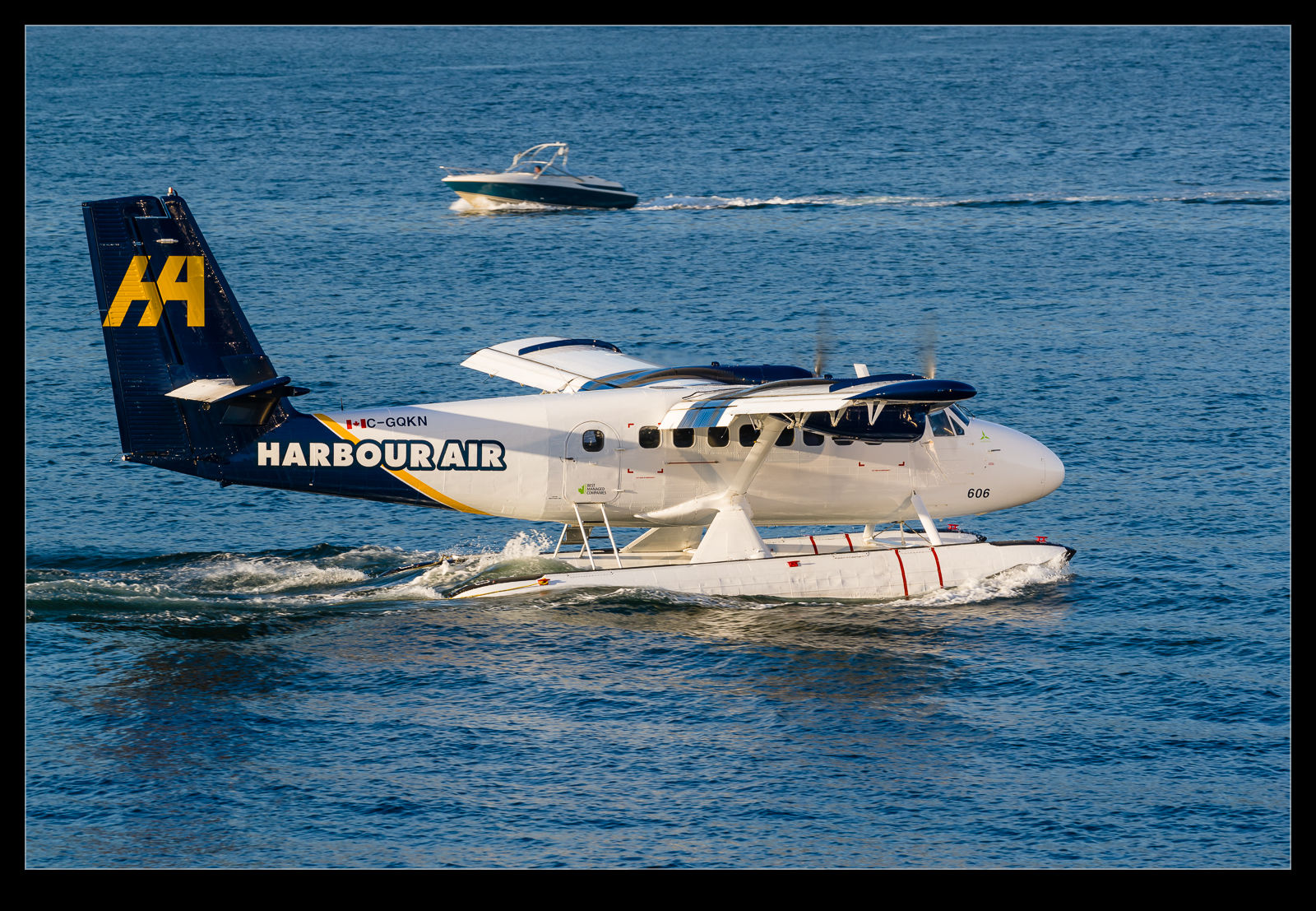 A few years ago we spent some time in Victoria on Vancouver Island.  Victoria has a lot of floatplane activity and, at the time, an airline called West Coast Air was operating with a large fleet of Twin Otters.  Since that time, West Coast was taken over by Harbour Air.  Harbour Air is the dominant operator at Vancouver.  However, while we were there, we saw only one Twin Otter.  A check online seems to suggest that they have focused more on the Otters and Beavers and reduced the Twin Otter fleet.  I assume they are not so economical for the type of operations they undertake but, if anyone has any more information about what happened, pleas let me know. 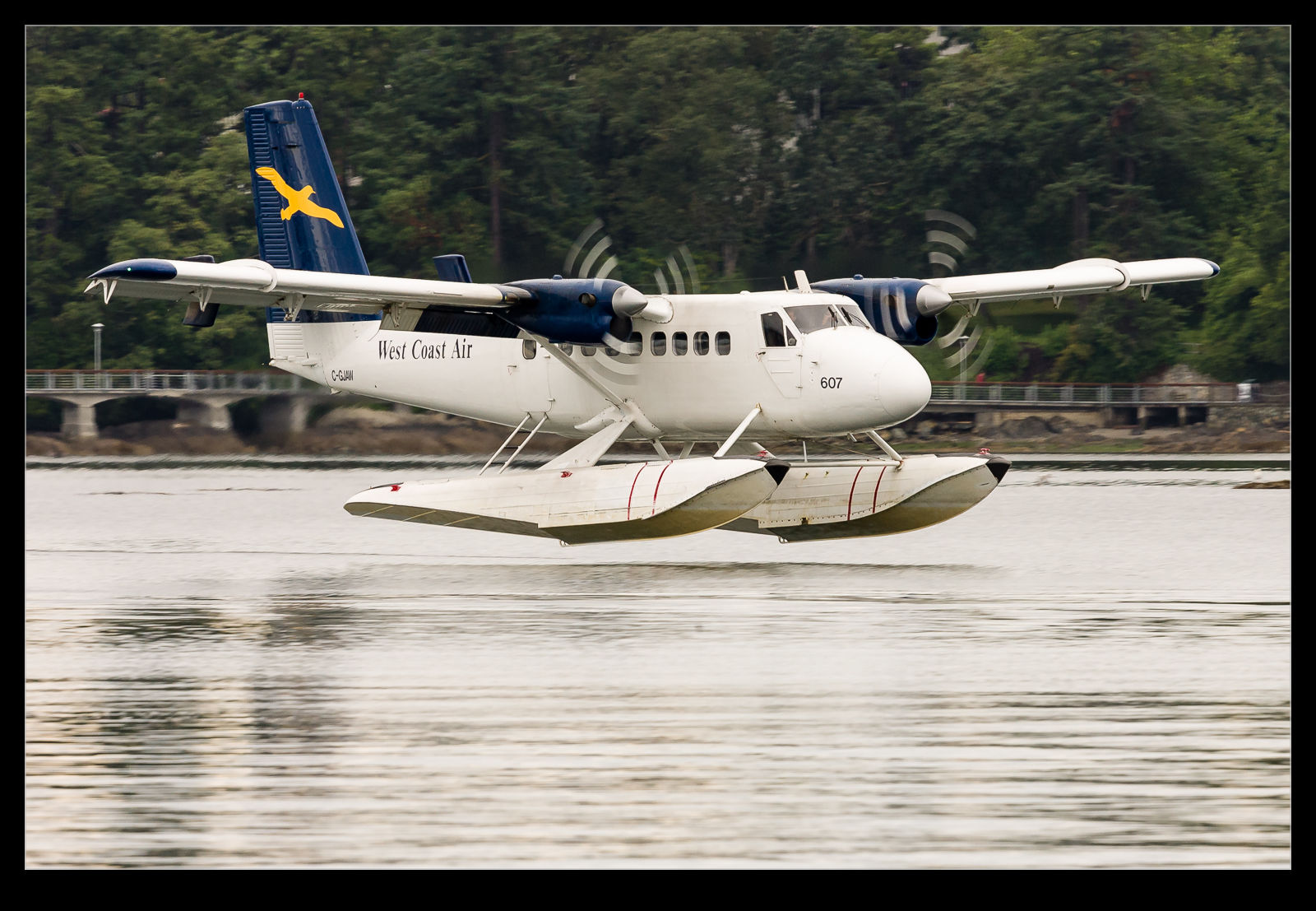 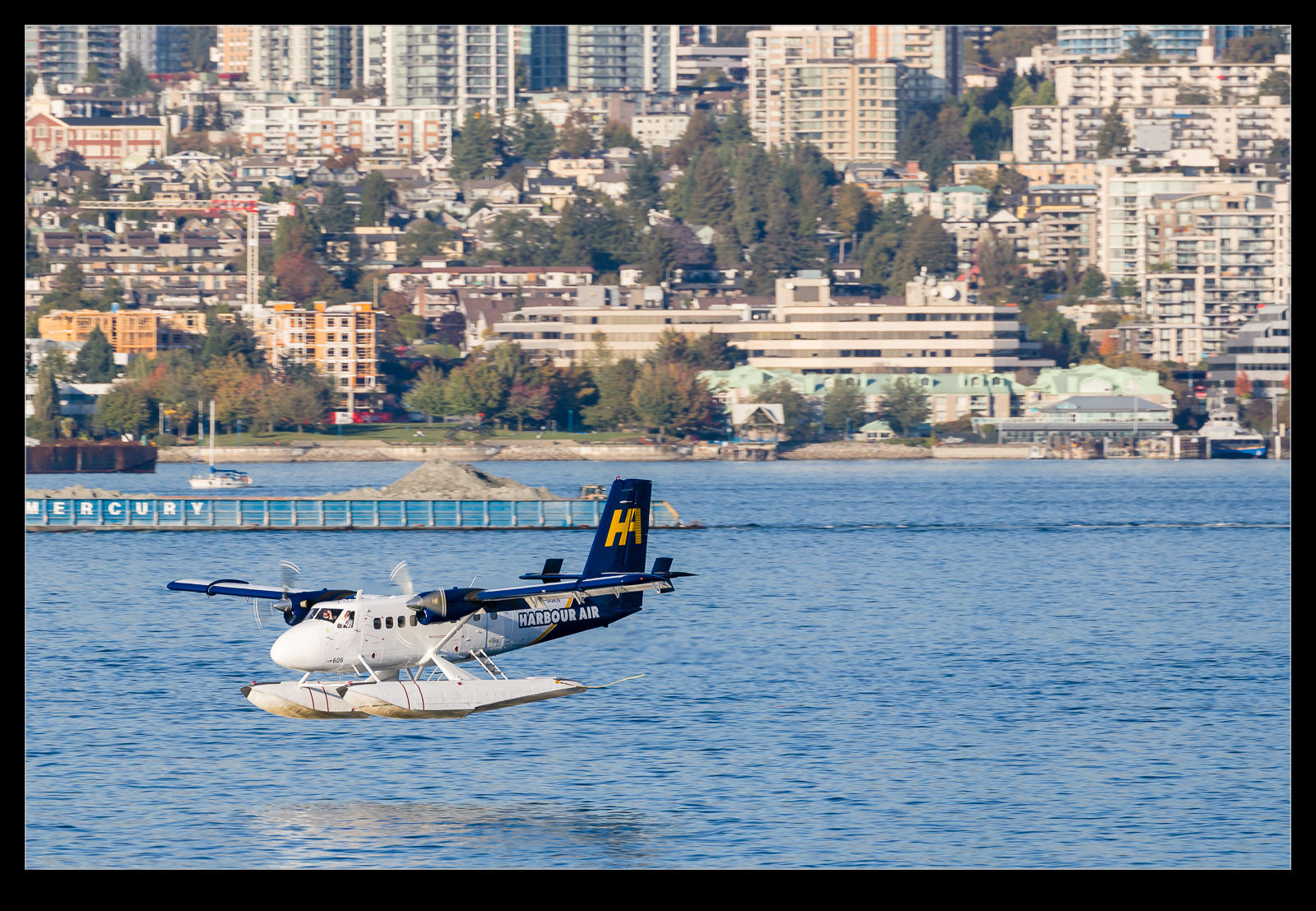