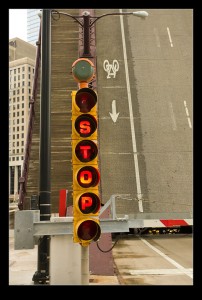 One of the things that is a sign of spring arriving in Chicago is the movement of boats back out into the lake.  Given how cold it gets here in the winter, the boats that fill the marinas along the lake during the summer months all head inland to storage once the temperature starts to drop.  Having your boat frozen into the ice that covers the water during the winter is probably not good for it.

Chicago, being built along a river, has a ton of bridge.  These are mostly “bascule” bridges – cantilevered bridges that are balanced with weights in such a way that very little effort is needed to lift them.  In days gone by, the bridges would open frequently for the regular river traffic of the commercial vessels.  These days, the boat trade on the river is focused on the tourist boats and they can clear the bridges when they are lowered.  Also, road traffic is heavy now so opening the bridges can be quite disruptive. 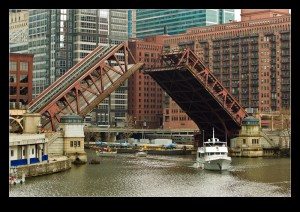 Therefore, there is a limited opening schedule for the boats to get out to the lake in the spring and a return schedule in the fall to get everyone back in.  The first opening of the season occurred the other day and I decided to wander out and see how it was going.  I have photographed the bridges near me many times, often in lovely weather.  This time I decided to go to some other bridges (and do it on a grotty day)!  I can’t plan the weather so maybe a chance to try some other ideas. 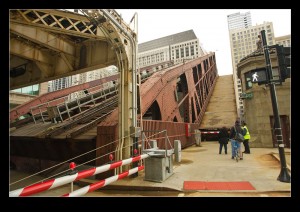 I didn’t realize that the first opening might also be an opportunity for the city staff to work out any kinks in the bridge openings that have arisen over the winter.  Let’s just say it wasn’t speedy!  However, once you have committed to the task, you have to see it through.

I guess the boat owners know about the problems with the first opening of the season.  Not too many boats were coming through.  Maybe I will learn the lesson too! 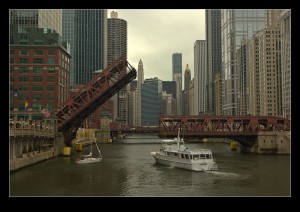 However, the process, while drawn out, did go ahead and the bridges opened in sequence along the river.  I decided to hang out near the join in the two branches of the river.  Here there are a couple of bridges that also have “L” tracks above them so make for a more complex bridge.  They also look a little interesting when opened up.  The light was a bit tricky but it was a fun way to start the day anyway.  Now to continue on to see what else is going on in the city…