After the trip to the Cultural Center from my previous post, I headed across to the Bean to try some other ideas.  I was interested to use the intervalometer to do some more experiments with time lapse photography.  Ever since I have got it, I have been experimenting with different ways of compressing events in time.  To date I had focused on larger scenes transitioning over periods of an hour or more.  This time I was looking at getting a short result that portrayed the movement of people around a busy scene like the Bean.

What I hadn’t planned on was the rain.  The day had been looking pretty unpleasant for quite a while but, since I was more interested in the movement of the people rather than a picturesque shot of the landmark, I wasn’t too bothered.  Besides, this was an experiment so, if I screwed a few things up and learned my lesson, I would be better prepared when a better day came along.  However, the rain that started around the time I arrived was a little more persistent than I had expected.

In such circumstances, where does everyone go to shelter?  Under the Bean of course.  I quickly joined them when I realized the rain was getting heavy.  As I sheltered under there, it was obvious that this might be an chance anyway.  I thought everyone would just stand under there so nothing would work from a motion perspective but I was wrong.  Despite the lack of anything to do for a while, people were constantly on the move.  I stuck the camera low to the ground under the surface of the sculpture and left it to do its thing for a while. 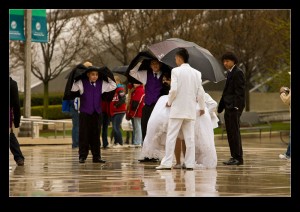 As the rain eased off, I headed outside to try and different look at people passing by.  I even decided to see what a slow moving person in front of a busy scene might look like.  I’m not obvious and it isn’t great but when you find a way to have fun in the rain, you do.

While the time lapse was underway, I noticed another group had arrived.  At this time of year it is no surprise to see wedding parties arrive to get some pictures in 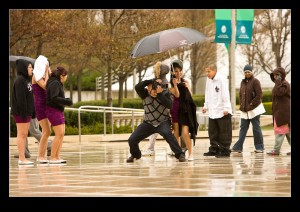 Millennium Park.  When it is pouring with rain, it’s not what they were hoping for but I guess you can’t come back another day when you only have one wedding day!  I felt bad for the people as they struggled to get their shots as the rain fell but the photographer was a determined guy and they were going to get it done.  I do hope they look good when they see them.