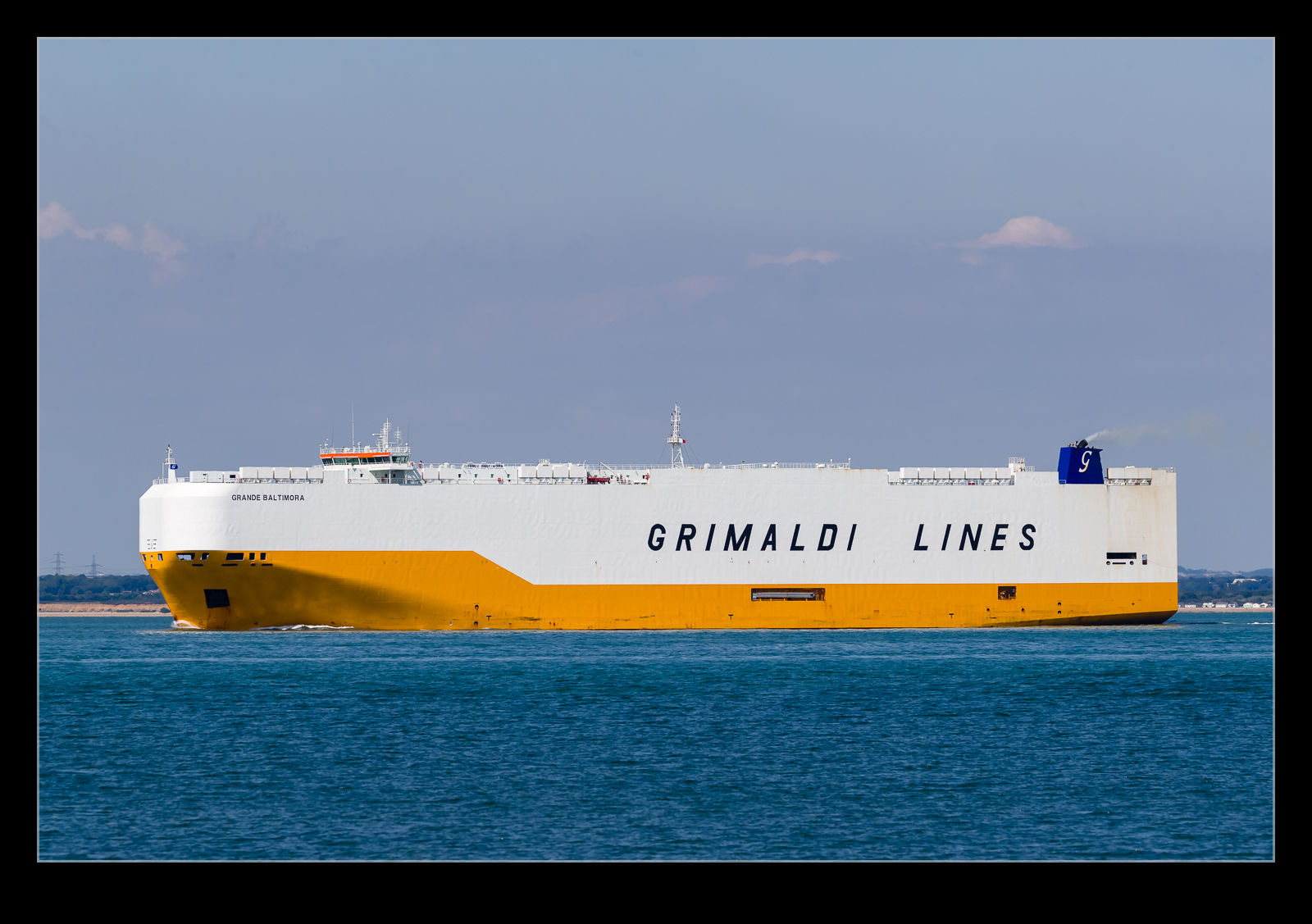 The movement of cars around the world requires a specialist type of ship and, while they may be functionally effective, they are not good looking ships.  They have the appearance of a box on the water.  The large rear loading ramp allows the cars to be loaded and then they get driven around the multitude of decks for storage.  This example was coming up the Solent and heading in to Southampton.  A similar example had a shift of load in this area and was put aground on the Brambles Bank to avoid sinking.  No issues in this case, of course. 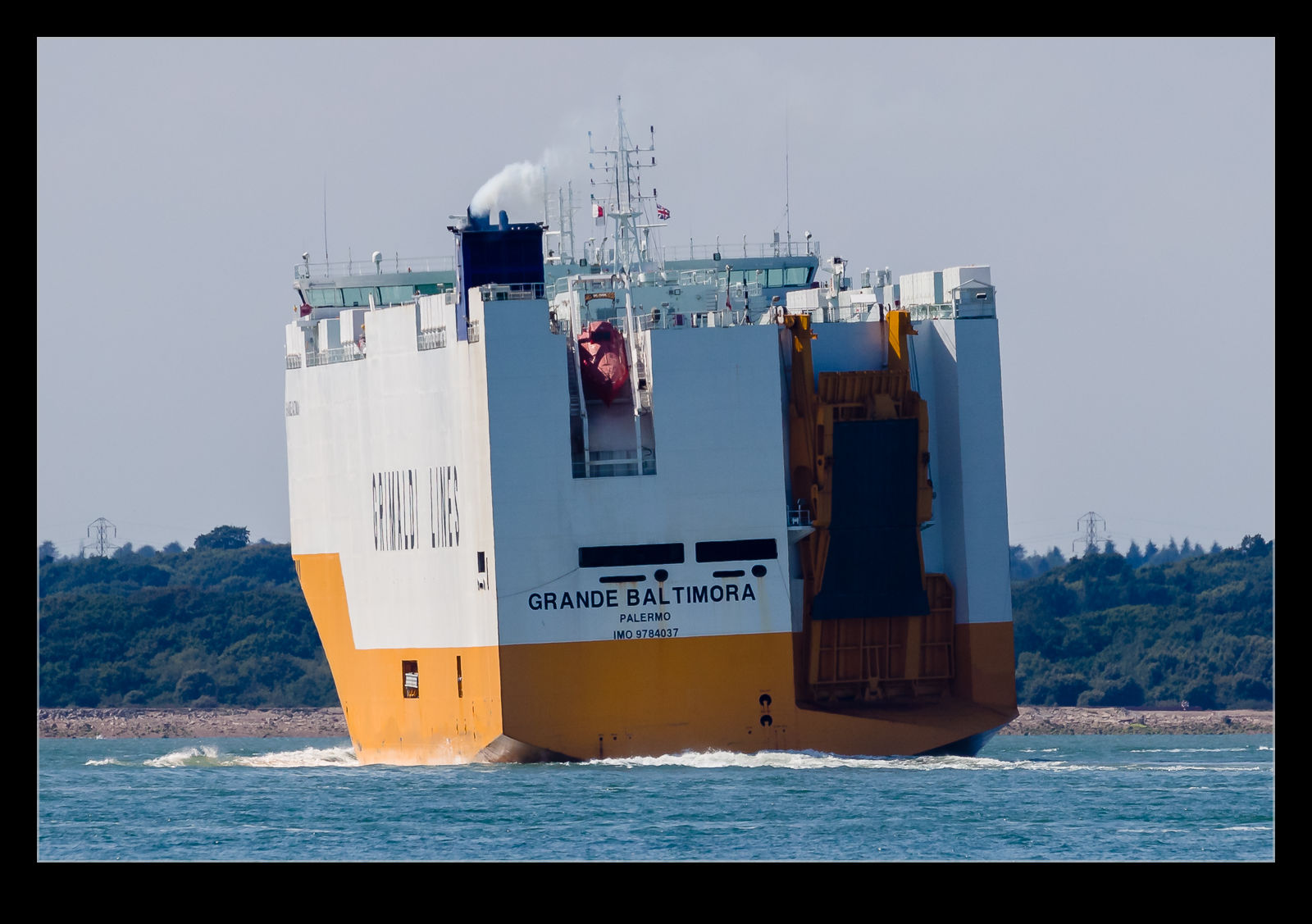 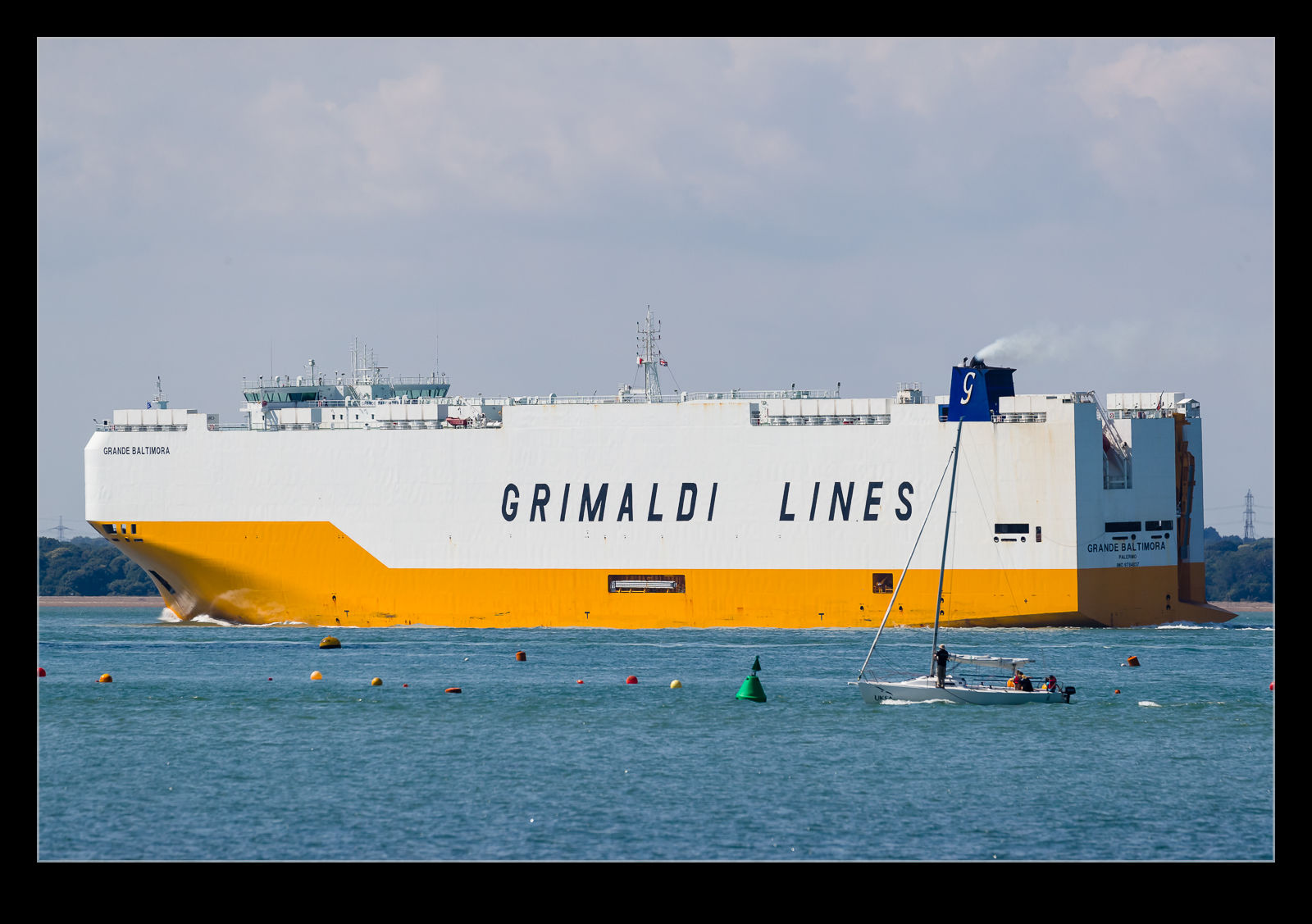 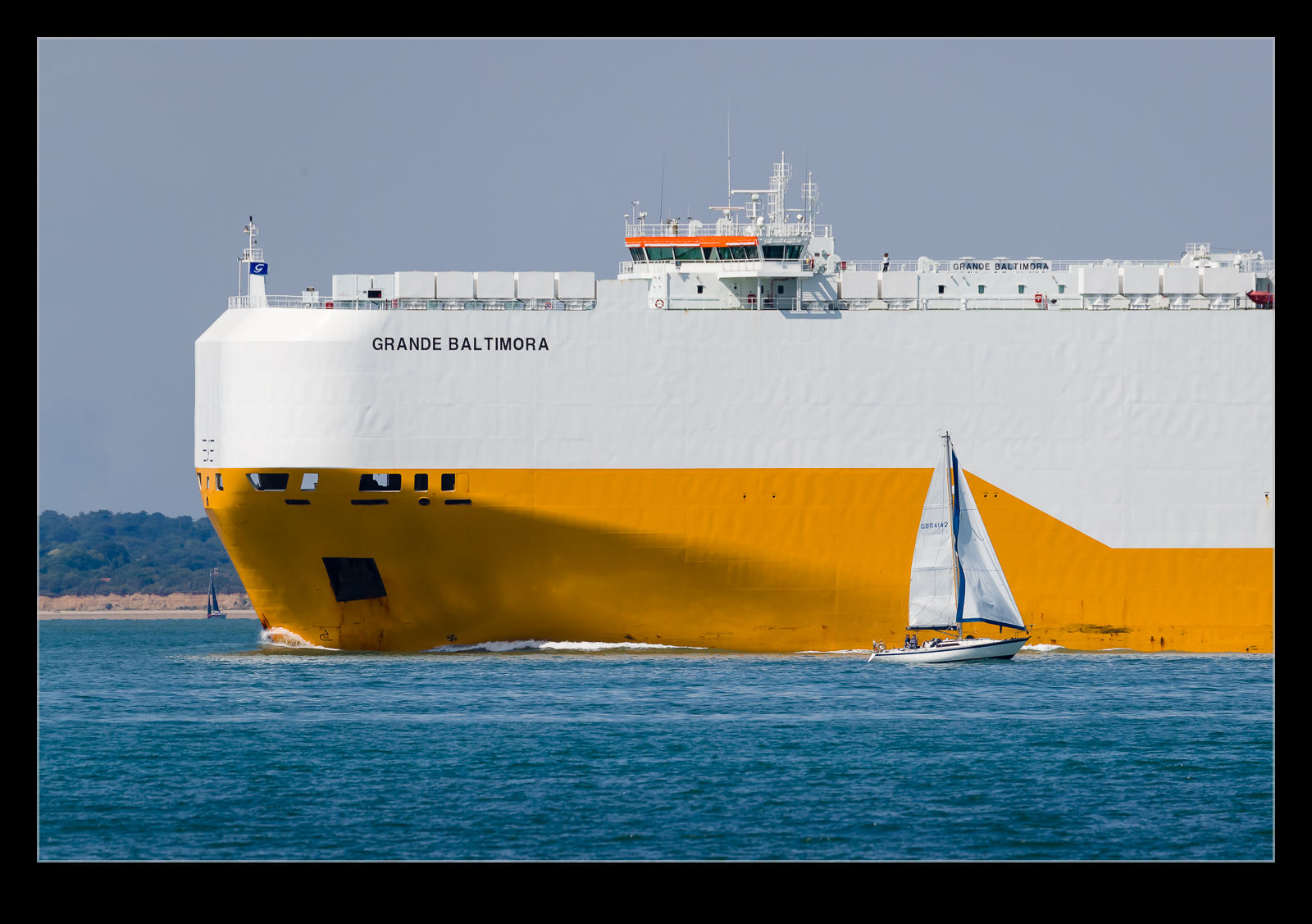 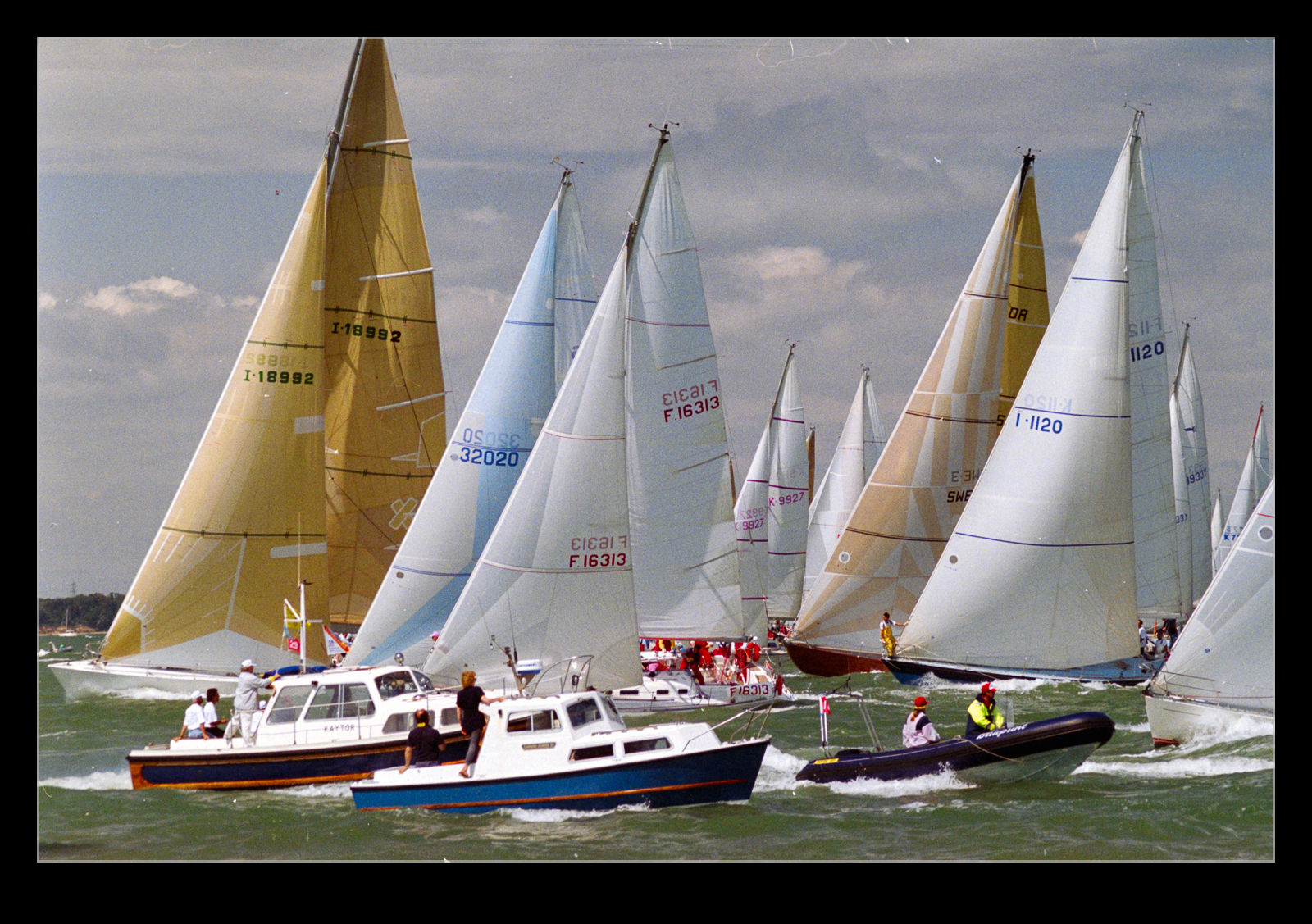 We recently had the 40th anniversary of the Fastnet race that ended up with a significant loss of life and boats.  Weather forecasting technology and the methods of communicating were very different forty years ago and some of the boats were ill-suited to open water racing of that nature.  Growing up in Cowes, the Fastnet race was always a big deal.  It was every other year as part of the Admiral’s Cup.  Some of my school friends got to crew on it.  I watched the start of one of the races when we still lived in the UK and I scanned in some of the shots I got that day.  The start was always frantic.  Boats are jockeying for position, often very close to shore.  Lots of shouting goes on.  With a good wind, big sailing boats look so cool to me. 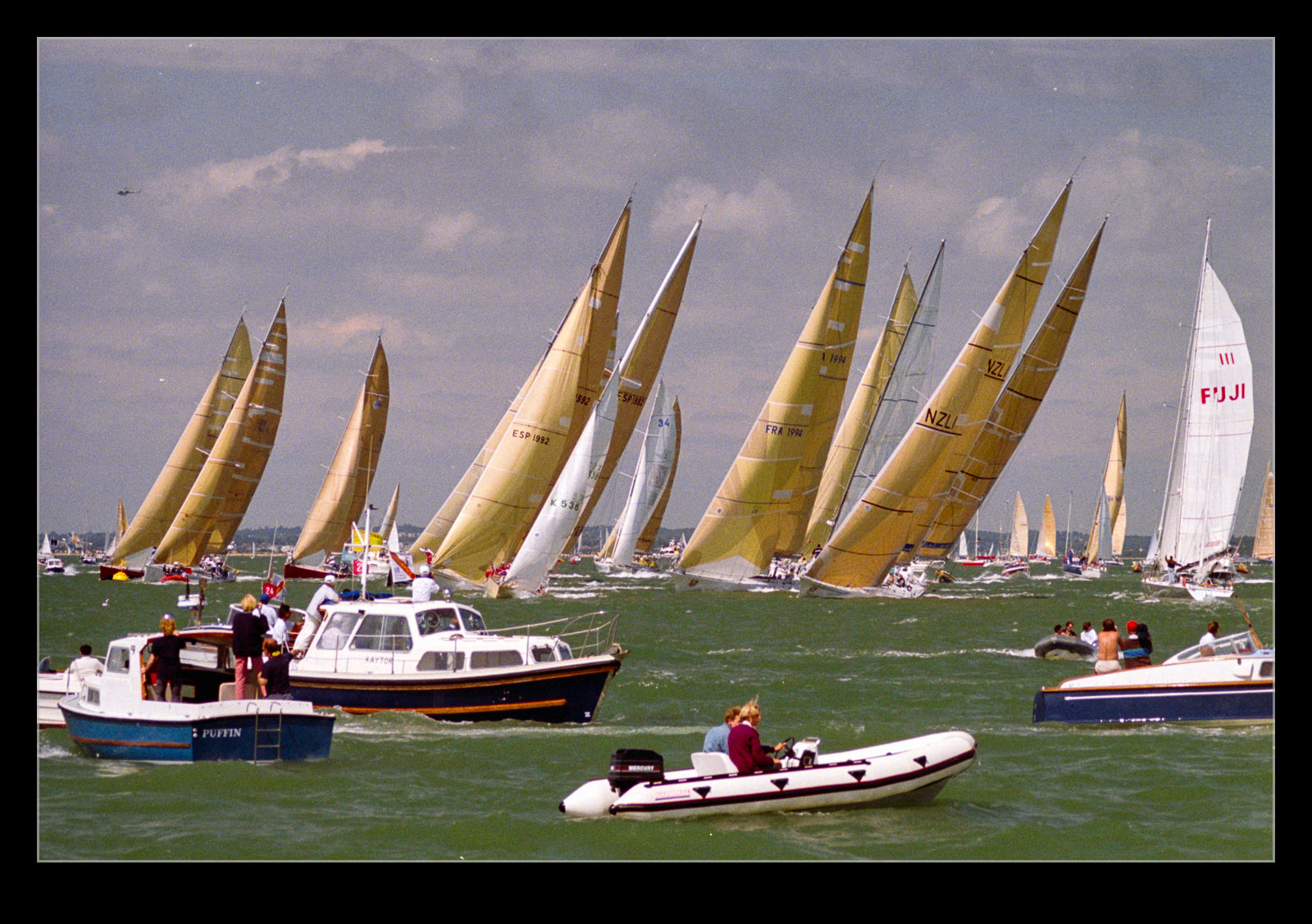 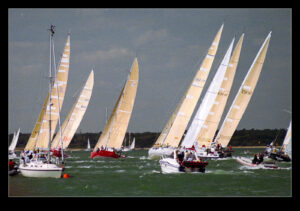 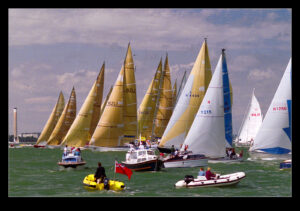 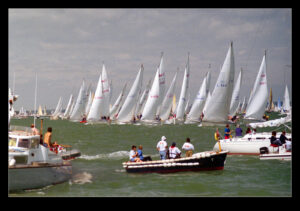 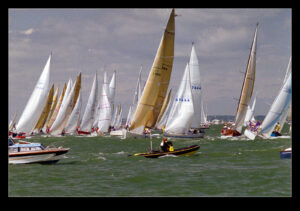 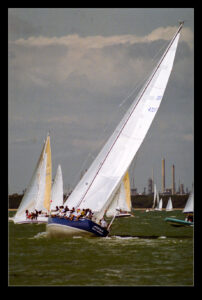 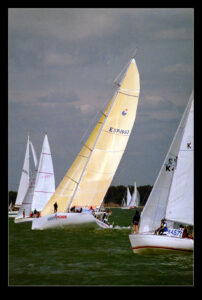 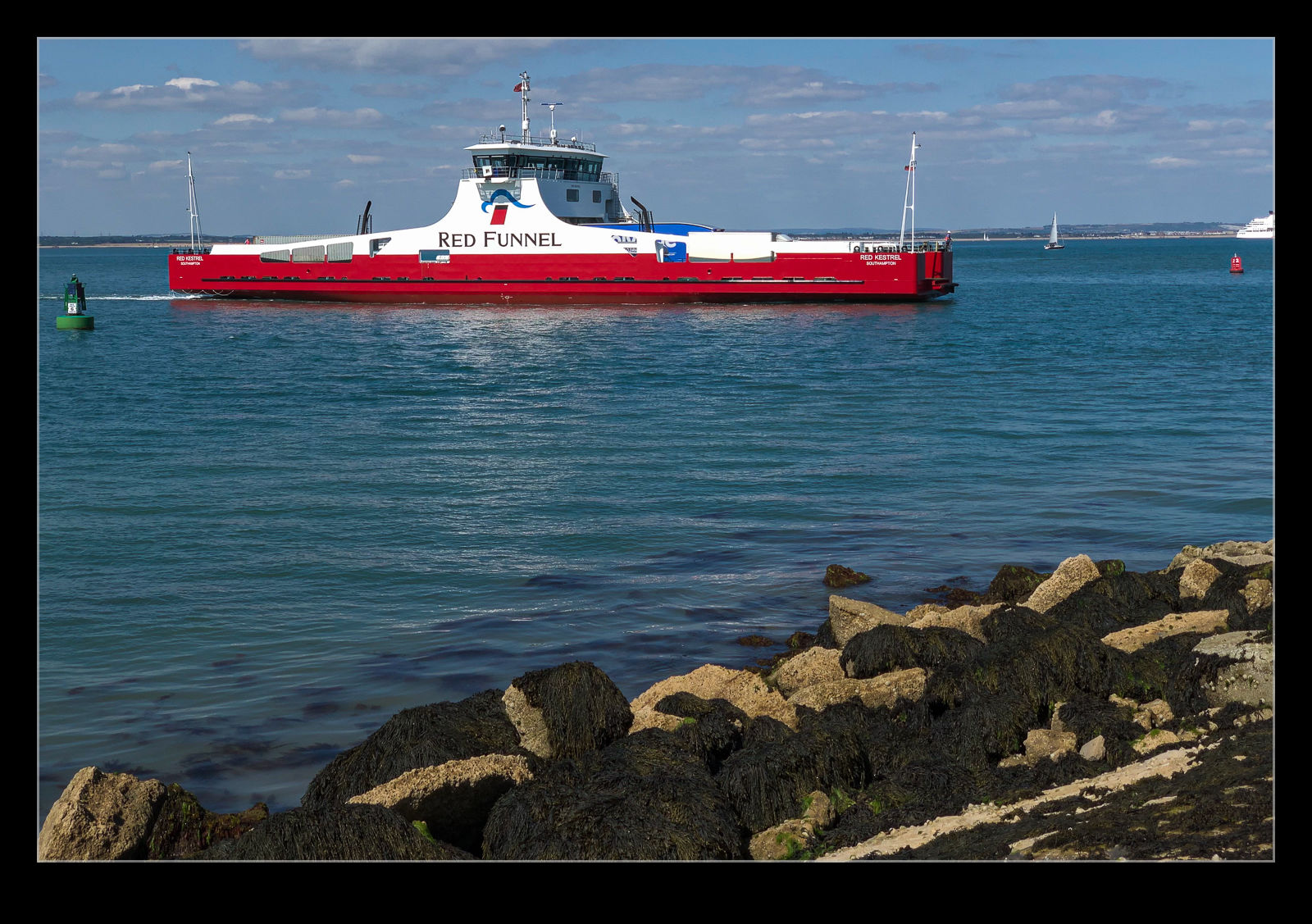 The Red Funnel ferries have made appearances on the blog after previous UK trips including this one here.  While we were on the seafront at Cowes, we saw one of the ferries coming in but it looked pretty odd.  It actually looked a lot like the old style of ferries from my youngest days.  There was little upper superstructure and it looked like it was designed for trucks only.  The name was Red Kestrel so a quick google confirmed that this is exactly what it is.  By taking freight traffic, it leaves more space on the main ferries for the car traffic.  Apparently, it has space for about 12 passengers so I guess it is not well appointed! 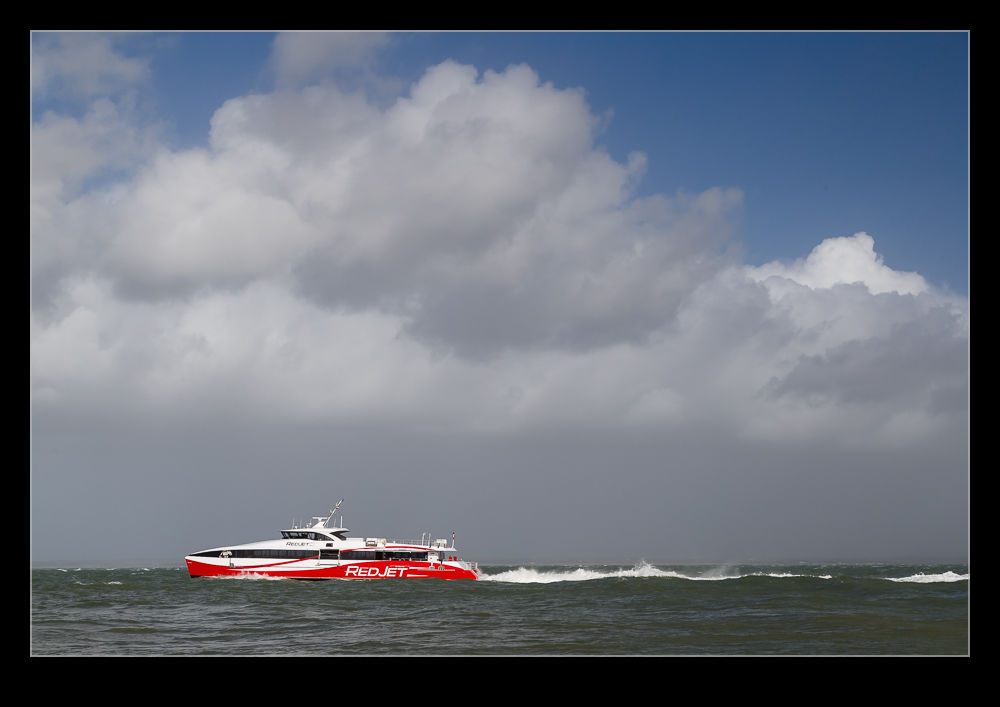 The fastest way to cross the Solent between Cowes and Southampton is the Red Jet.  These catamarans have replaced the hydrofoil service that was the quickest way over when I lived in Cowes.  The hydrofoils were interesting to ride on, particularly when the weather got a bit rough, and they had a single prop that, if they threw it off, left them bobbing out in the water awaiting a tow.  The RedJets are clearly bigger and probably a lot more reliable while still being fast.  I have never ridden on them but my family do frequently. 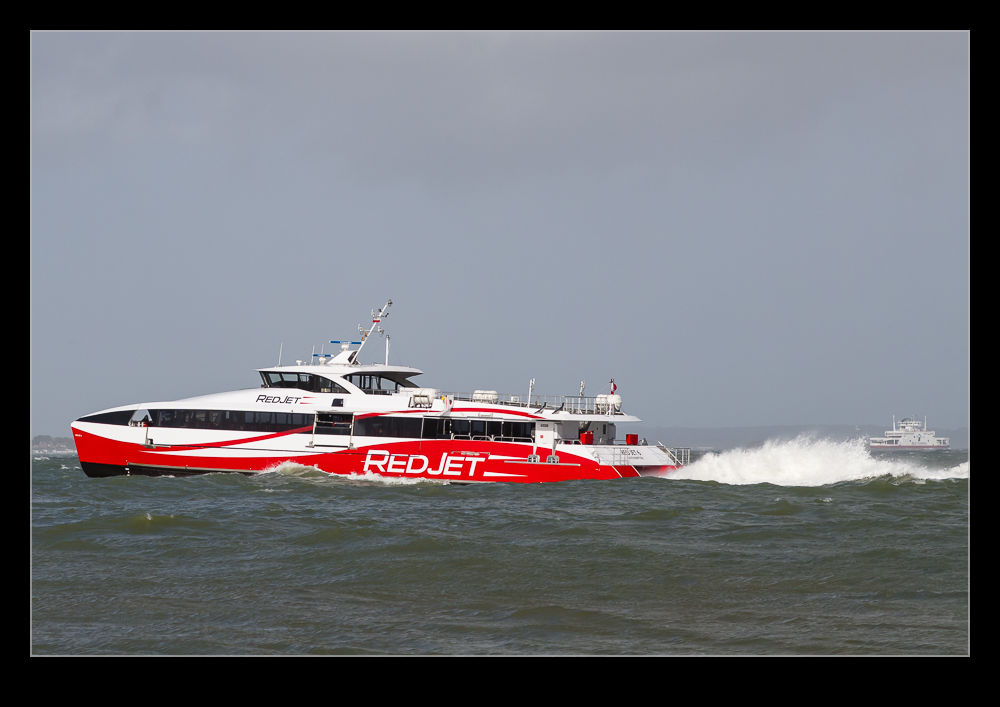 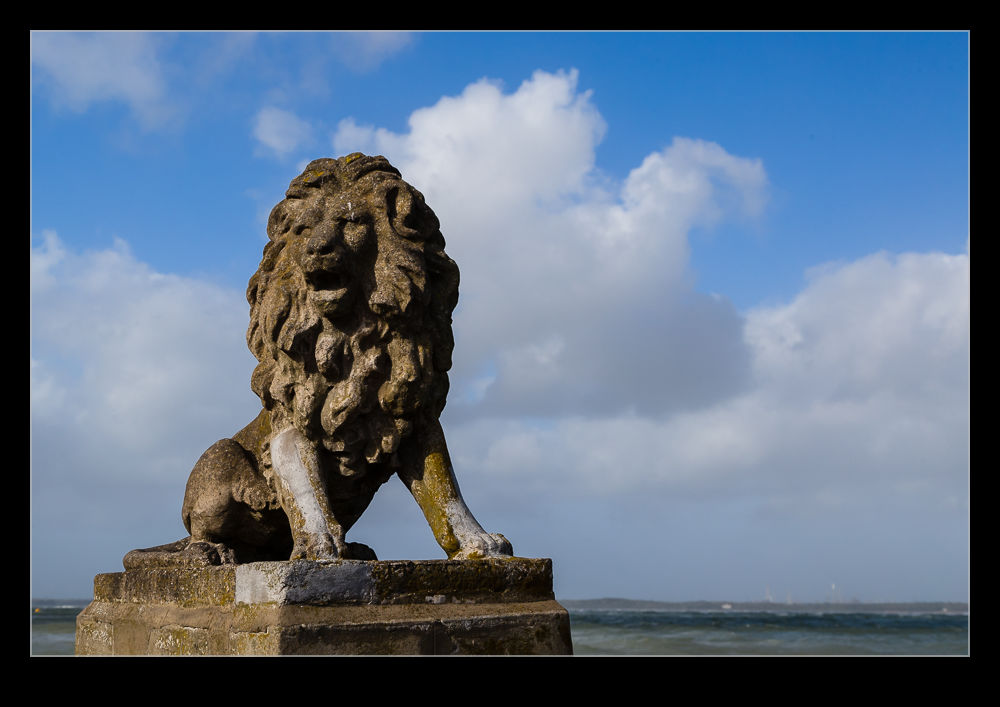 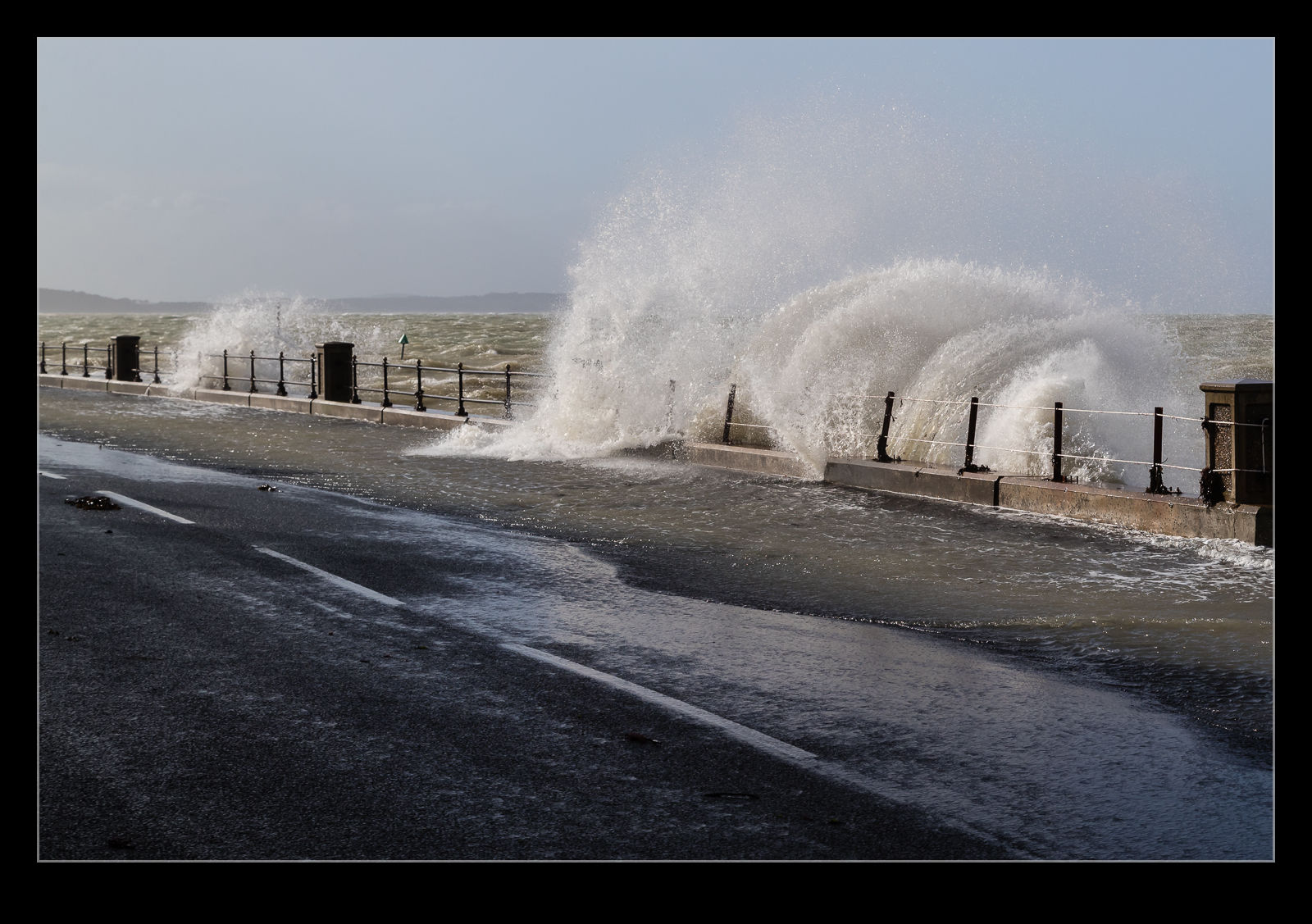 We drove along the seafront from Cowes to Gurnard.  The tide was high and the storm was bringing a swell in from the west.  Consequently, there was a lot of water along the road with sections under a few inches.  Some caution as we drove and we could get through.  Meanwhile, the waves were bashing in to the wall and splashing high in the air.  With the wind being so strong, it was tricky to hold steady for a shot and I was also a bit vulnerable to getting a lot of spray in the face.  However, I managed to get some shots and some video while minimizing how damp I got and how much salt water got near the camera. 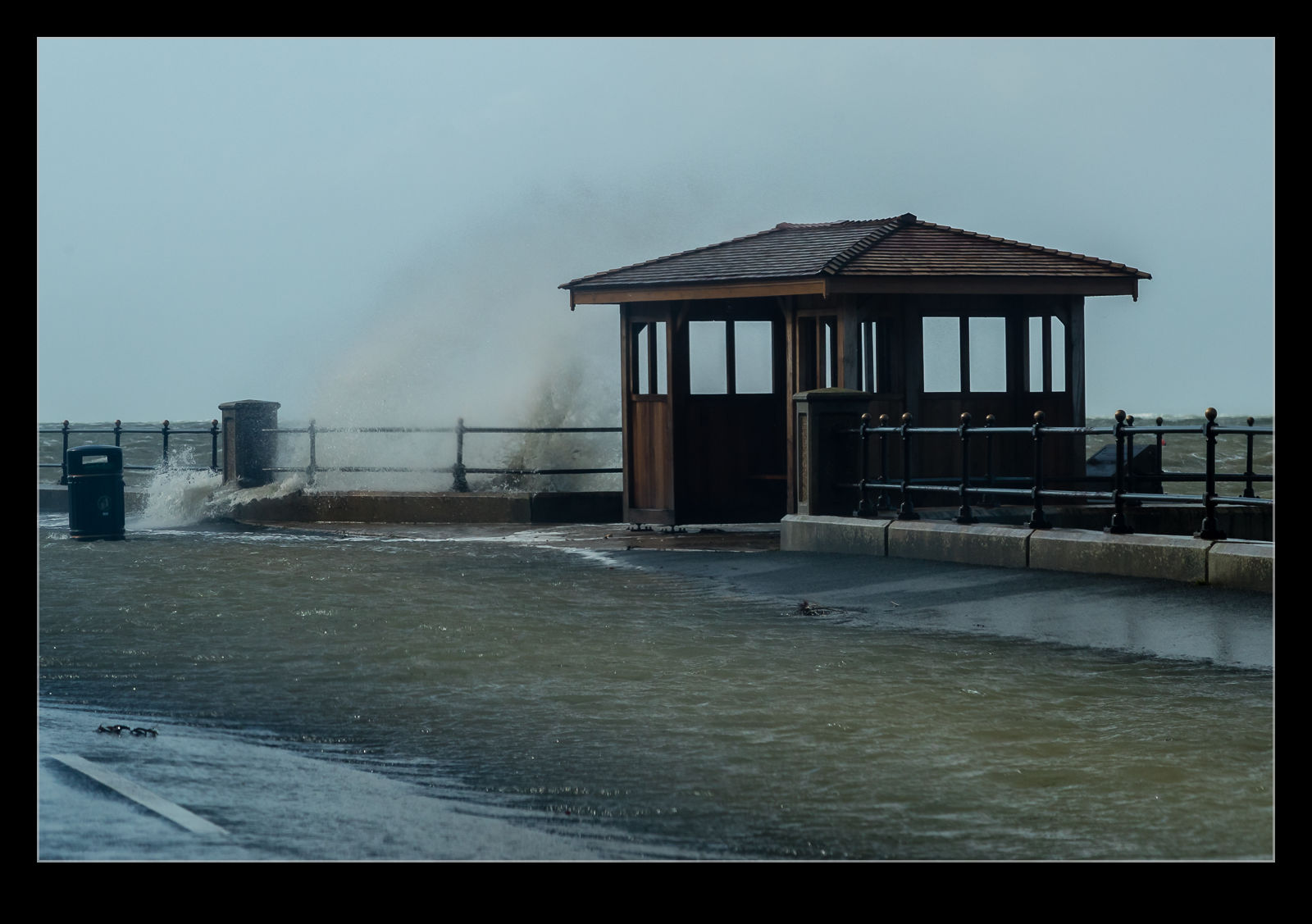 As a kid, I always loved being down on the seafront when the weather was stormy.  It is way more fun to watch the waves crash in than to see a calm sea.  This proved to be a perfect day for me to visit as the following day things had calmed right down. 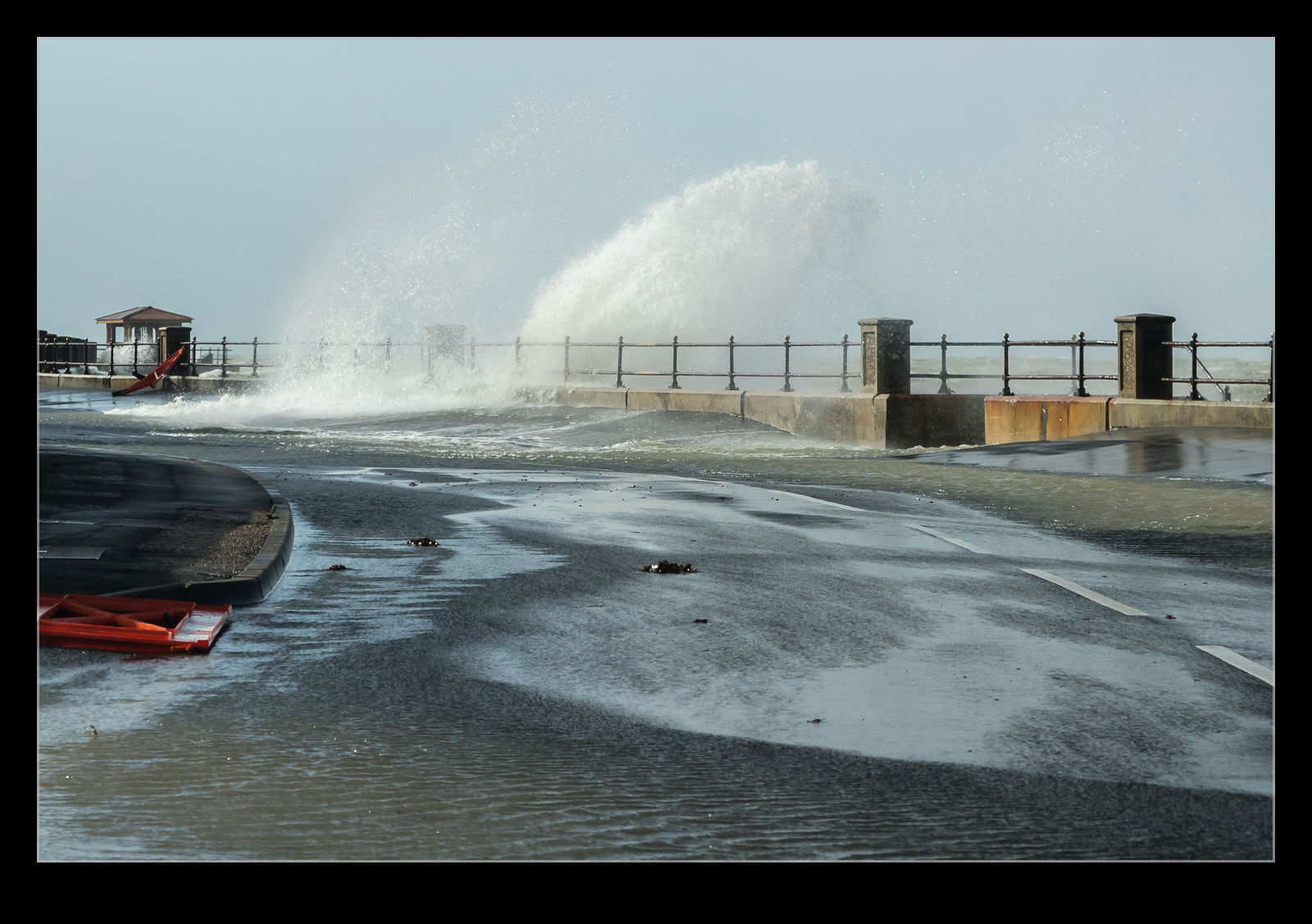 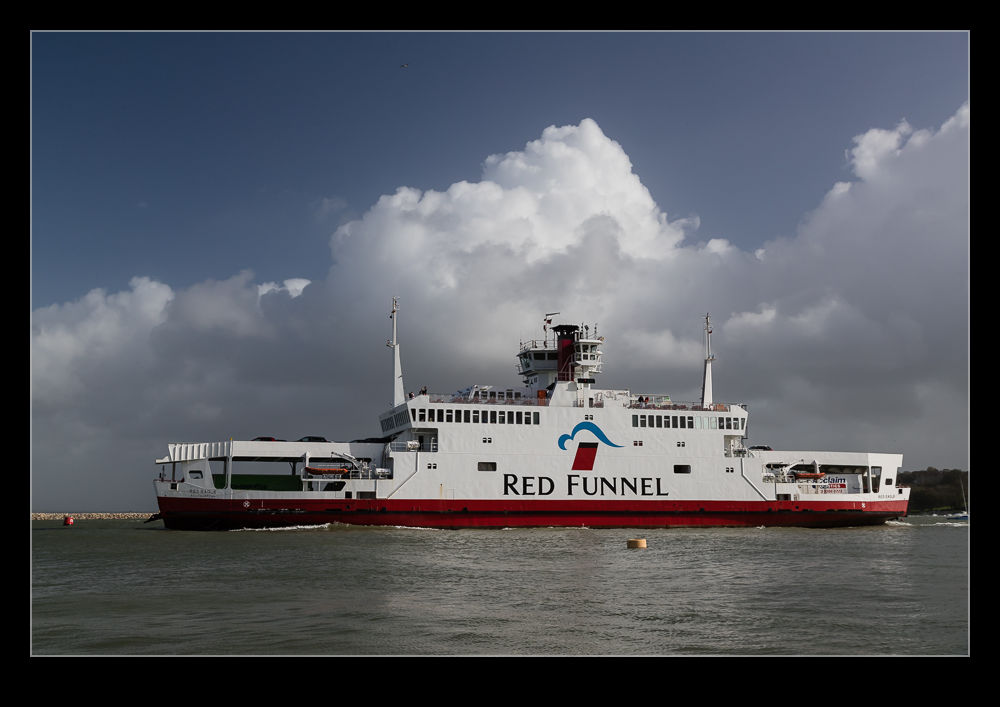 If you want to get to the mainland from the Cowes area, Red Funnel are your main option.  They have two services to Southampton.  The car ferry operates from East Cowes while a fast catamaran provides a passenger only service from West Cowes.  Both types of ferry came by while I was on the seafront.  The car ferry headed out while the cat waited outside the harbor.  I guess the strong winds meant they were looking for a bit more space.  Once the ferry was gone, the cat came in to the harbor. 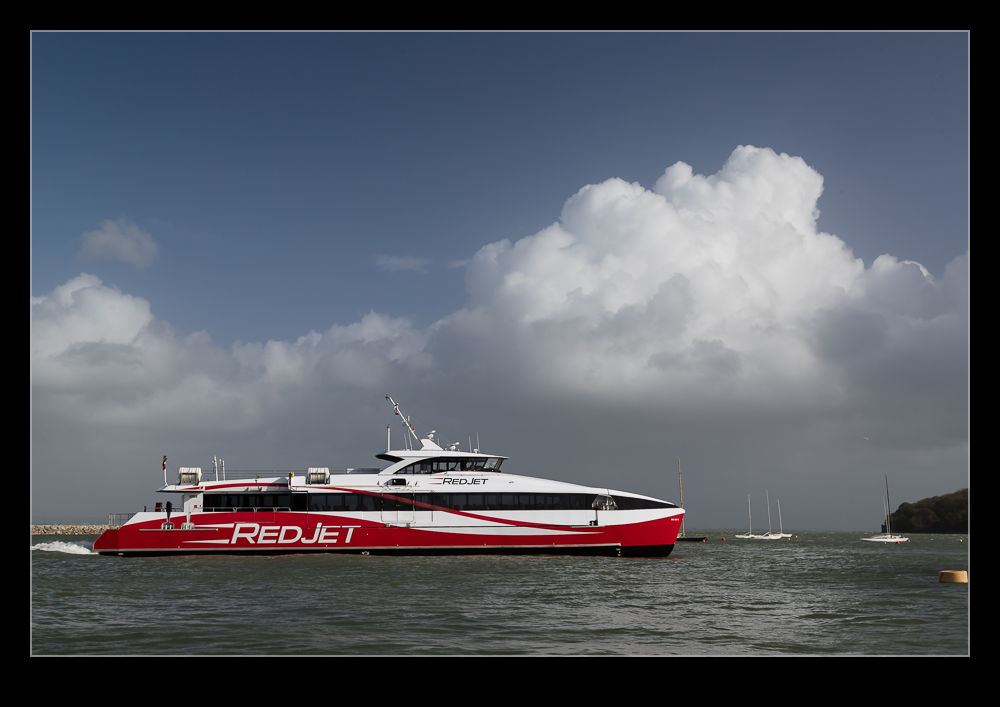 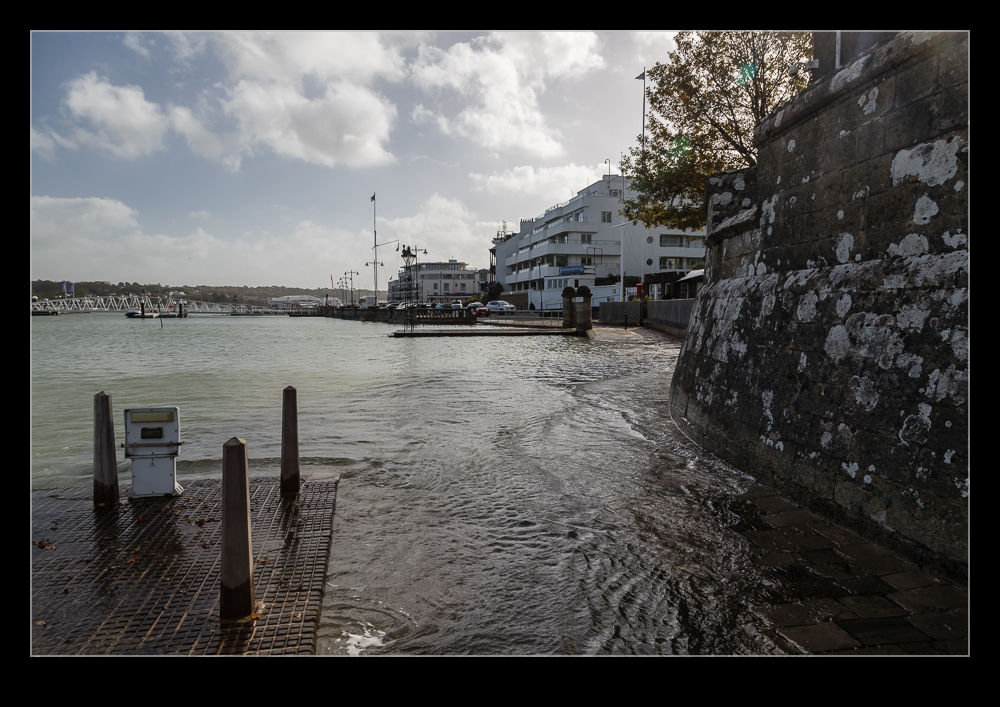 The seafront at Cowes moves from the Parade to Princes Green via a path that runs around the Royal Yacht Squadron.  During the races, the cannons that signal the racing are mounted here (along with a lot of ceremonial cannons that don’t get used much.  At this time of year, everything is gone.  With the high tide, that path was a bit gone too!  Th water level was high enough to mean that the path was underwater most of the time.  It might have been possible to run through during the gap in the surges but no one seemed to think it was a good idea. 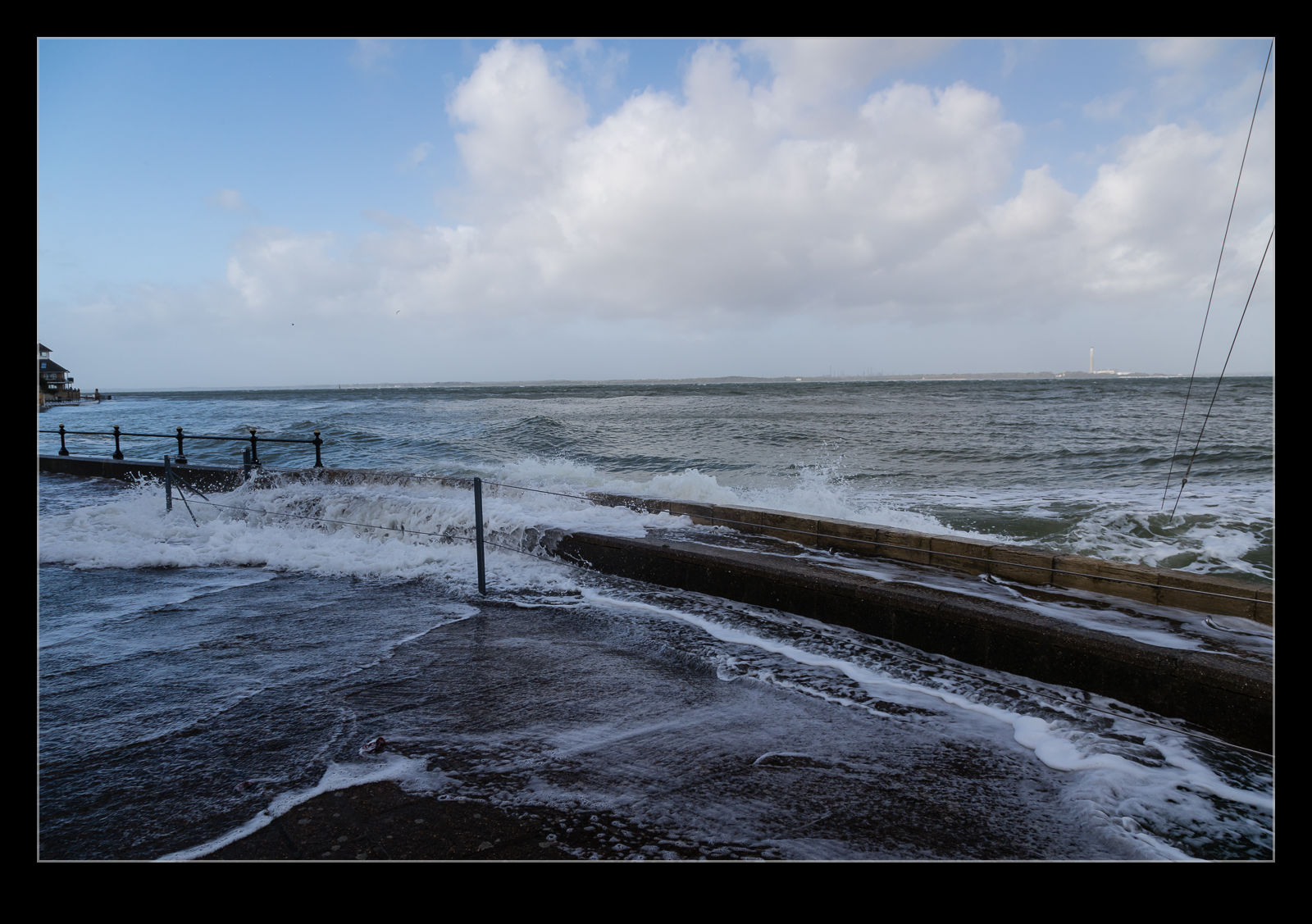 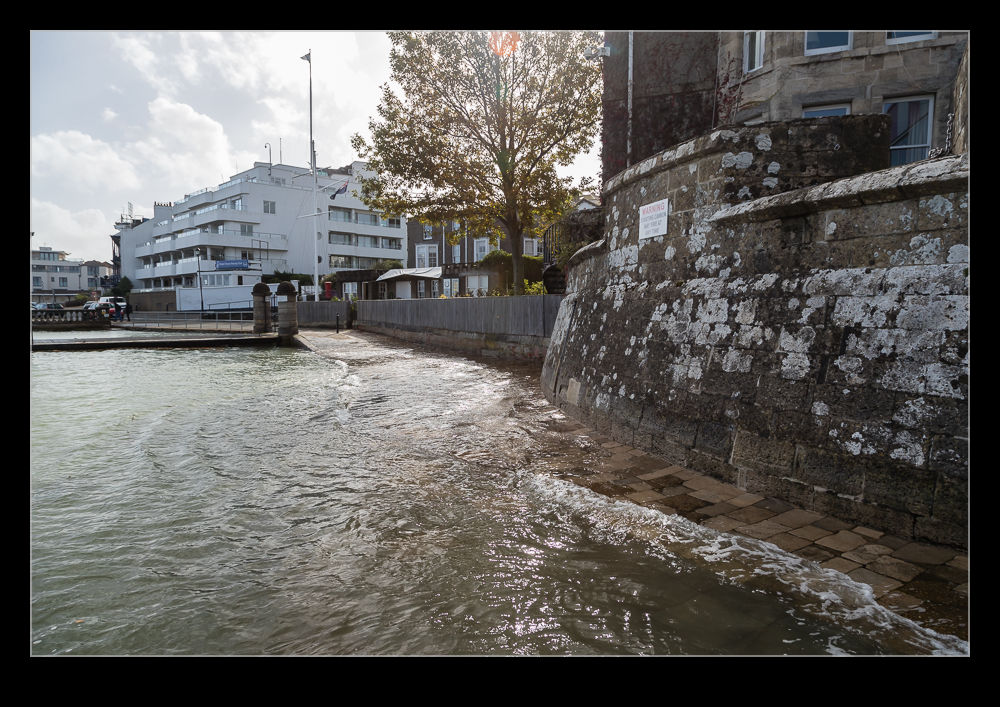 The tide was very high when we got the parade in Cowes.  The water level was just below the street level.  Naturally, there was some swell, even though we were inside the harbor wall.  This meant the water was pushing back up through the drains that normally take water from the street down to the sea.  The water would force itself back up through the drains.  Sometimes it was just a small amount of water but the bigger waves resulted in a bit more flow back out of the drain.  Video is the best way to show this.  The metal of the drain cover had the level of corrosion you would expect for something with this proximity to the sea! 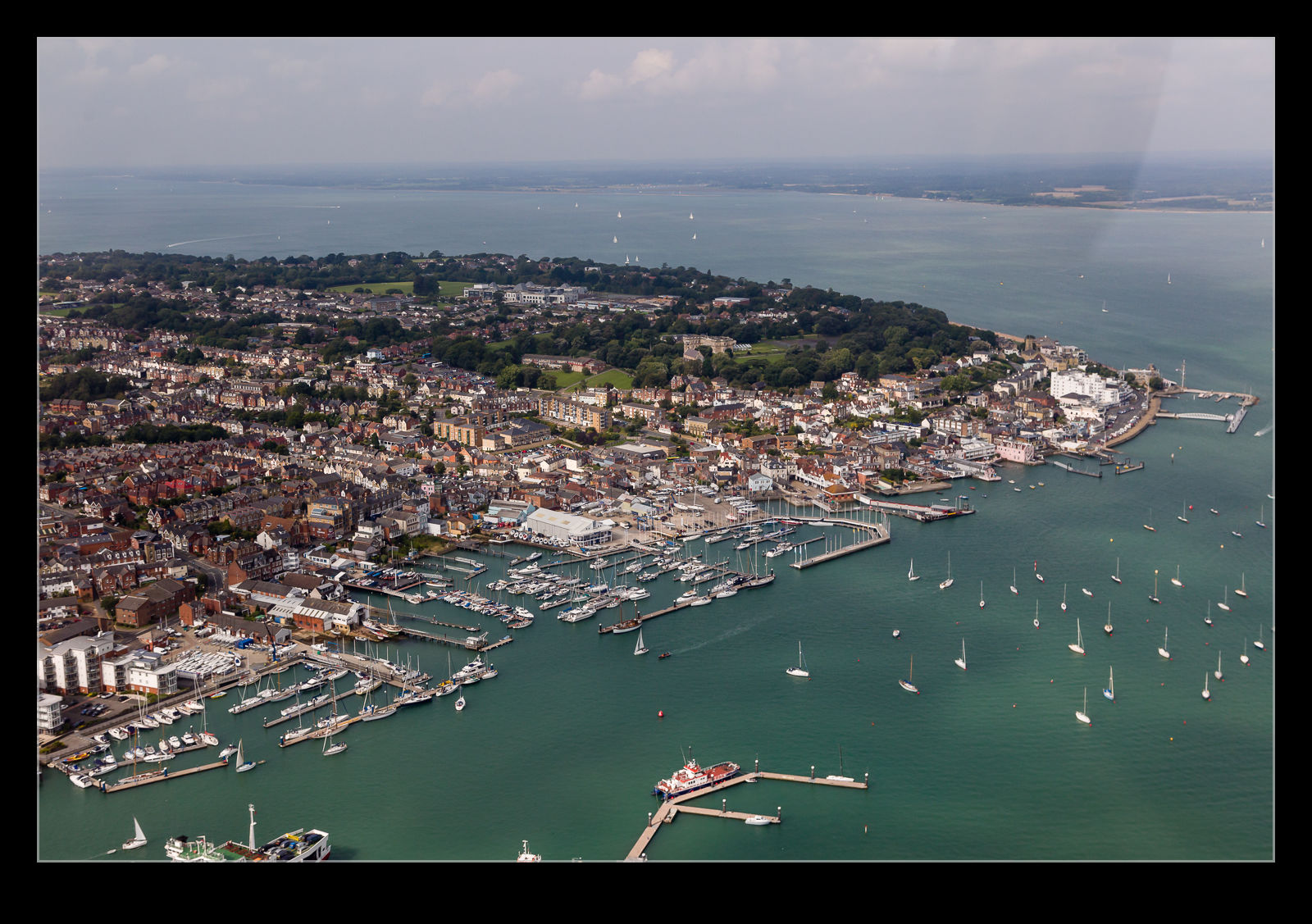 A large part of my childhood was spent in Cowes on the Isle of Wight. During our visit, I got some time to fly around the Island with Pete in his Piper Arrow. While I did get some stick time, I had my camera with me so there were some pretty frequent changes of control so I could get some photos of various parts of the Island. Cowes is an interesting place from the air so we managed to get a few shots as we circled overhead. 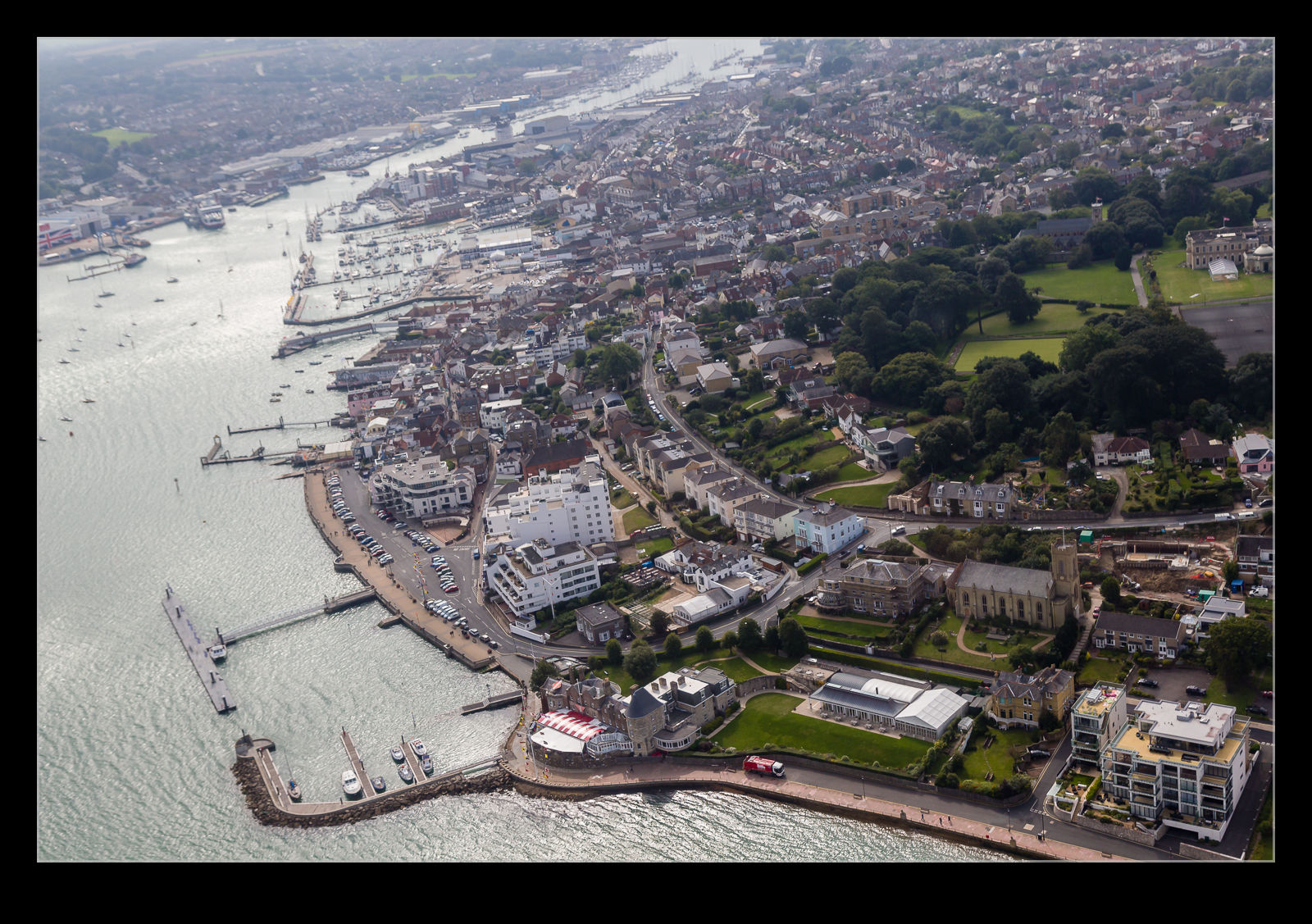 Shooting through the window of the Arrow is not ideal but the transparencies in Pete’s plane are in good shape so do not make things too distorted. Of course, when facing into the sun, the reflections from inside the plane can sometimes be an issue and they do crop up in some of these shots. The harbor is the main area of interest. I lived in an apartment just off the waterfront with a great view over the Solent. We could watch the various boats coming in and out. There are two ferry services that run to the mainland. Both are operated by Red Funnel and one is a passenger catamaran while the other is a car ferry. 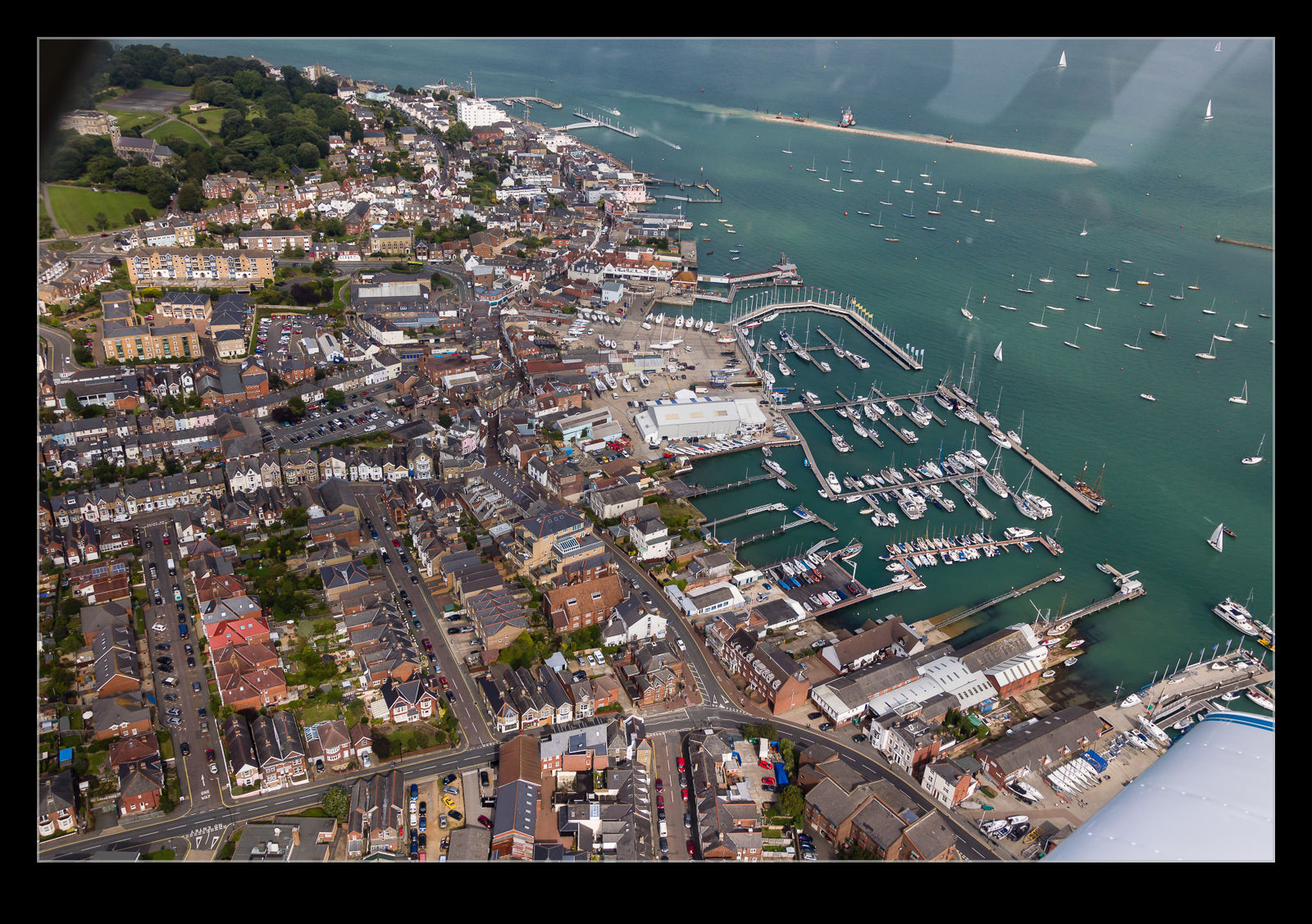 Much redevelopment of the harbor area has taken place since I left. Some of the old houses on the waterfront have disappeared to – replaced by apartment developments. The marina has undergone a significant transformation and a new breakwater appears to be under construction just offshore. I wish I had more aerial shots from my teens when I was flying over the Island to compare with what is there now.