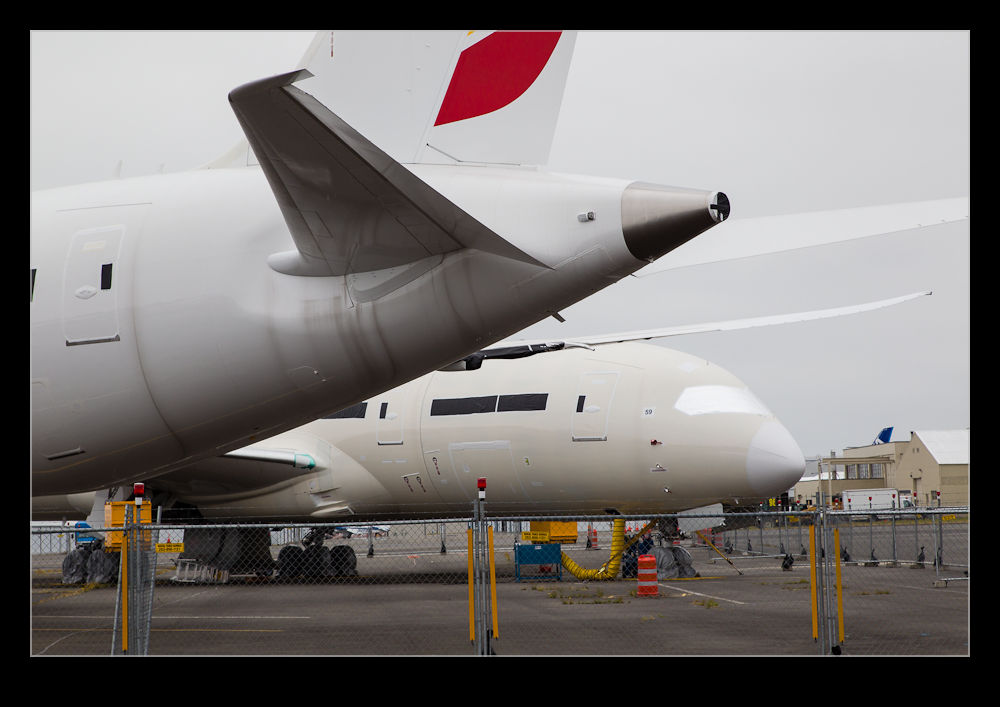 A recent trip to the Pacific Northwest recently included a free afternoon in which I had a chance to do some exploring.  When I first new I was going to be in the area for a couple of hours, I wondered what to do.  I was thinking about shooting at Boeing Field or Everett.  Everett can have some interesting moves but can also have absolutely nothing happening.  Boeing Field can be the same of course.  I was still pondering this when on the flight across and then it occurred to me that Everett had some other things I had been meaning to do for a while other than hope for wide-body moves from the Boeing plant. 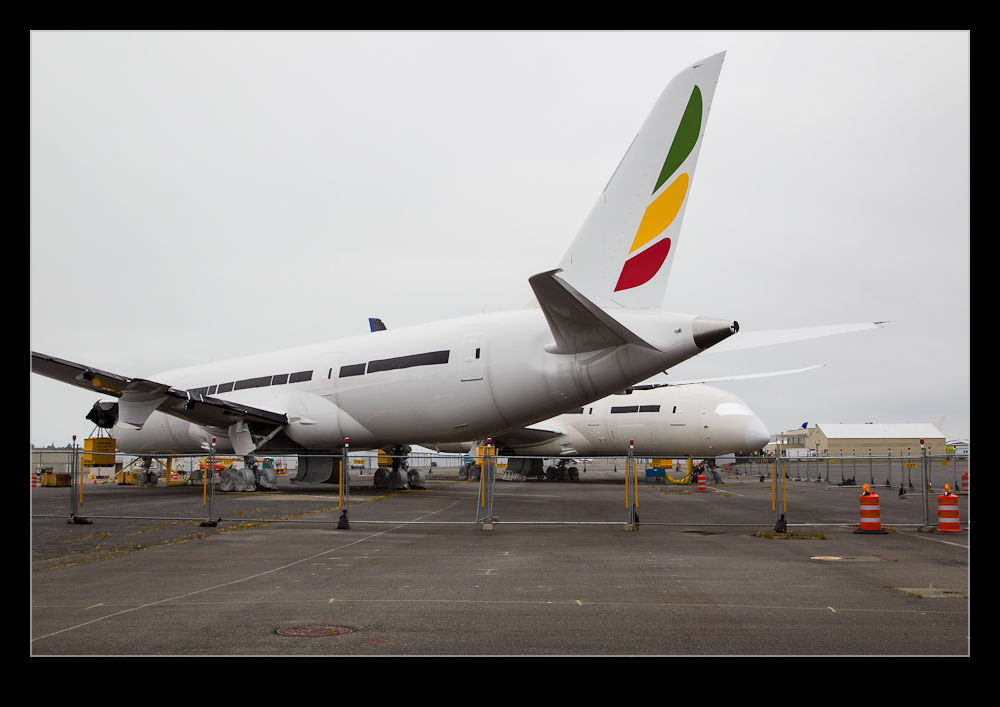 Paine Field (to give it its proper name) is home to a number of vintage aircraft collections.  I shall describe more exploration of them in upcoming posts.  However, as an appetizer, I shall mention something that does involve Boeing wide-bodies.  The 787 parking lot!  I knew that Boeing had produced a bunch of 787 airframes while they were still dealing with the design and production issues and that these were stored awaiting rework for delivery.  I had even seem some pictures.  However, I guess I had not really thought about it until I got there. 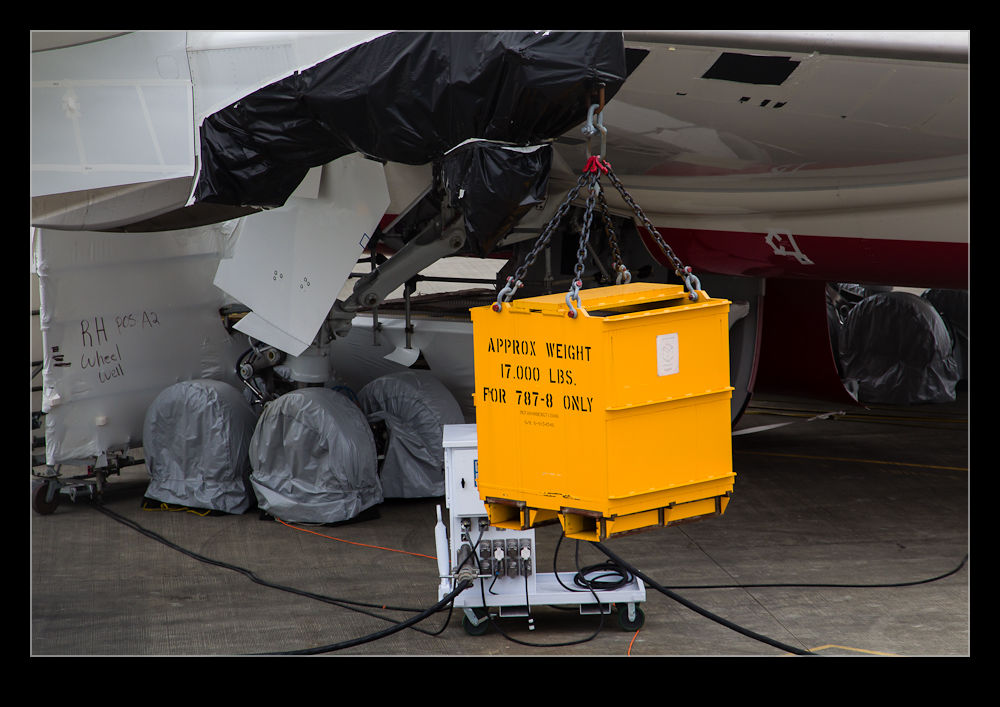 Paine Field is covered in Dreamliners!  They are everywhere.  Every time you go to a different part of the field, you come across 787s parked up.  Some are in areas being worked on prior to delivery.  Others are sitting on spare ramp space awaiting their turn in the rework process.  Some can be identified either because they are fully painted or parts of them are that allow you to work out where they will go.  Others are just white and who knows what awaits them.  They have large weights attached to the engine pylons to keep them balanced without forking out huge amounts of cash for the engines.  If you are of an accounting bent, you will still marvel at the amount of cash tied up in these airframes that will not be cleared out for at least 18 months.  No engines reduces this a bit but they are still expensive things to have lying around.  Boeing ran out of their own space so they are renting space from the airport for all of this parking.  I guess the airport is happy to have a bunch of cash coming in without having to suffer too much inconvenience! 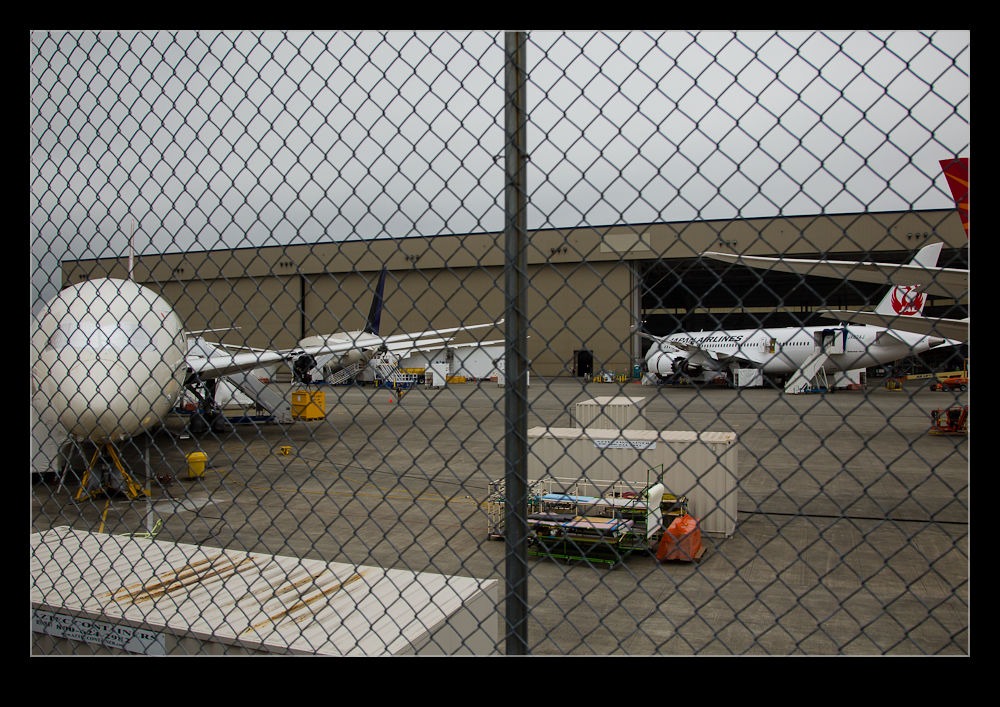 If you are anywhere near Everett in the coming months, do at least pass by to see just how much is there.  Of course there are plenty of new jets being readied for delivery too but that just makes it look even more amazing!