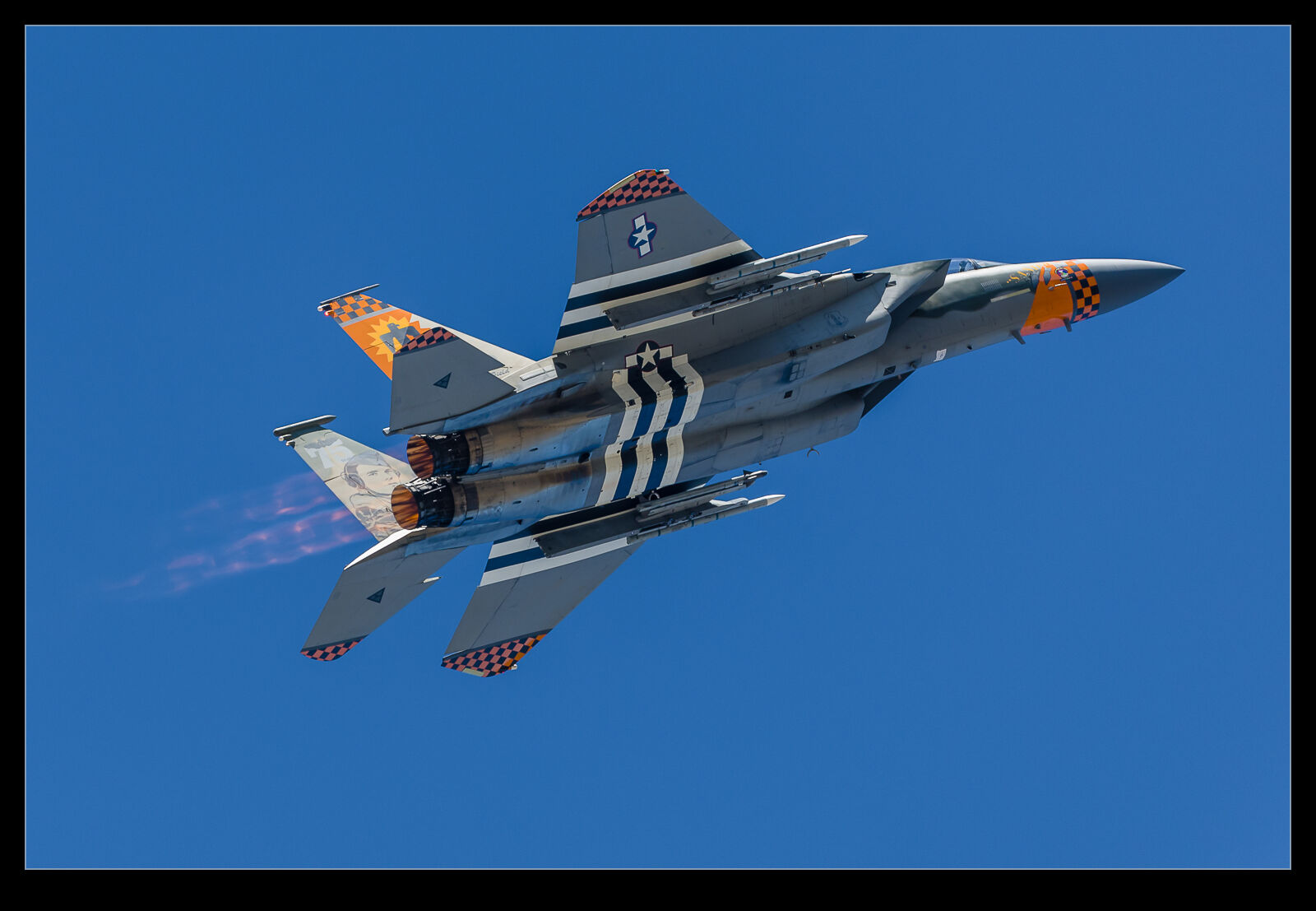 On the morning after our arrival in Klamath Falls, we headed out to a location that was hopefully good for getting shots of jets departing to the north in the morning.  What we hadn’t counted on was that the based aircraft would be practicing their display for the air show the following day just after we got there.  This was a four ship display that involved some sporty departures and then beating up the airfield from various directions and in various combinations. 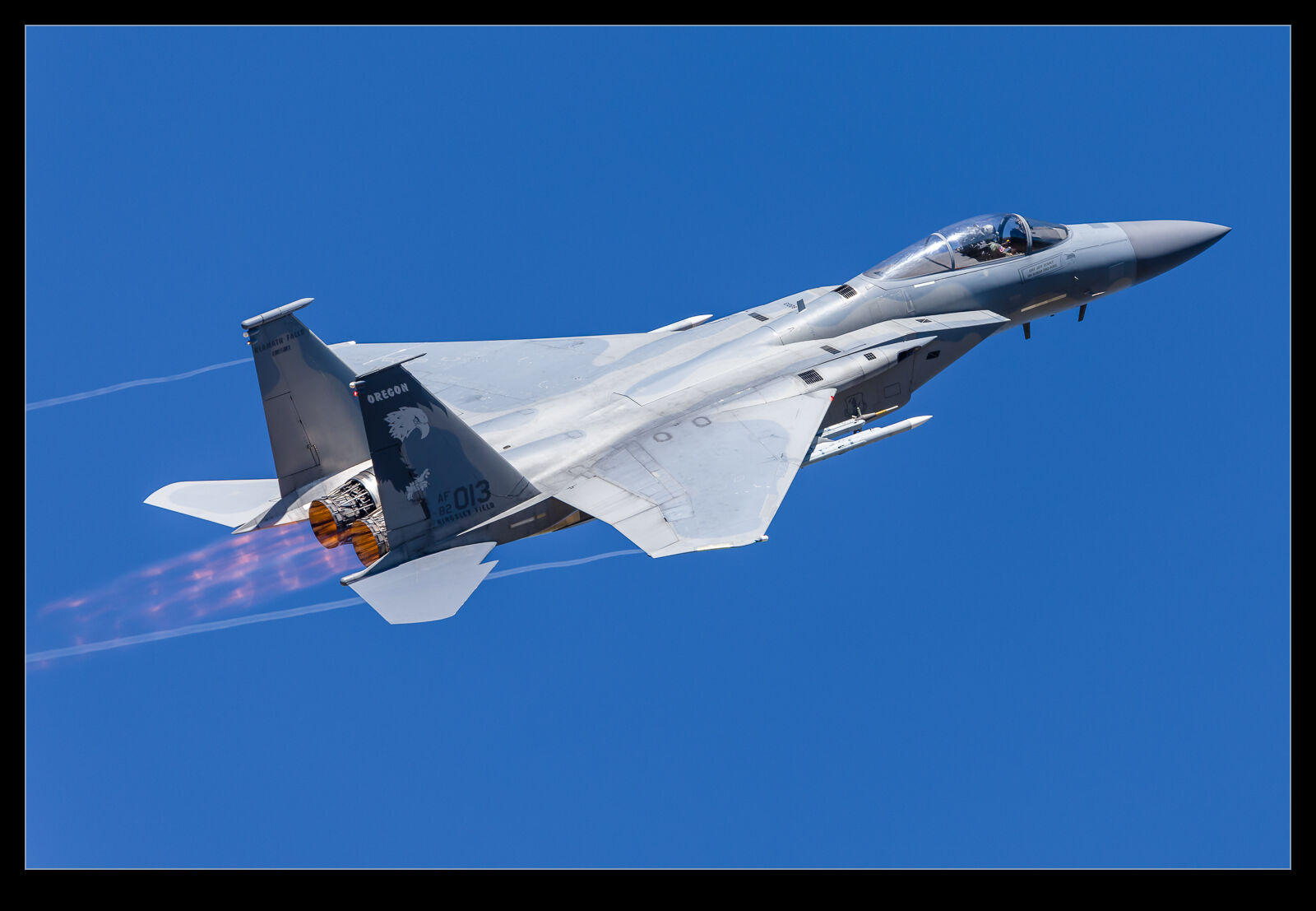 They launched four F-15s in stream.  The first jet up was the specially painted aircraft that the unit has had for a while but which I had not seen previously.  It was joined by two more single seaters in unit markings and the last of the four was an F-15D that wasn’t carrying any unit markings.  They would keep it really low after getting airborne and then cross the fence at speed and with burner locked in. 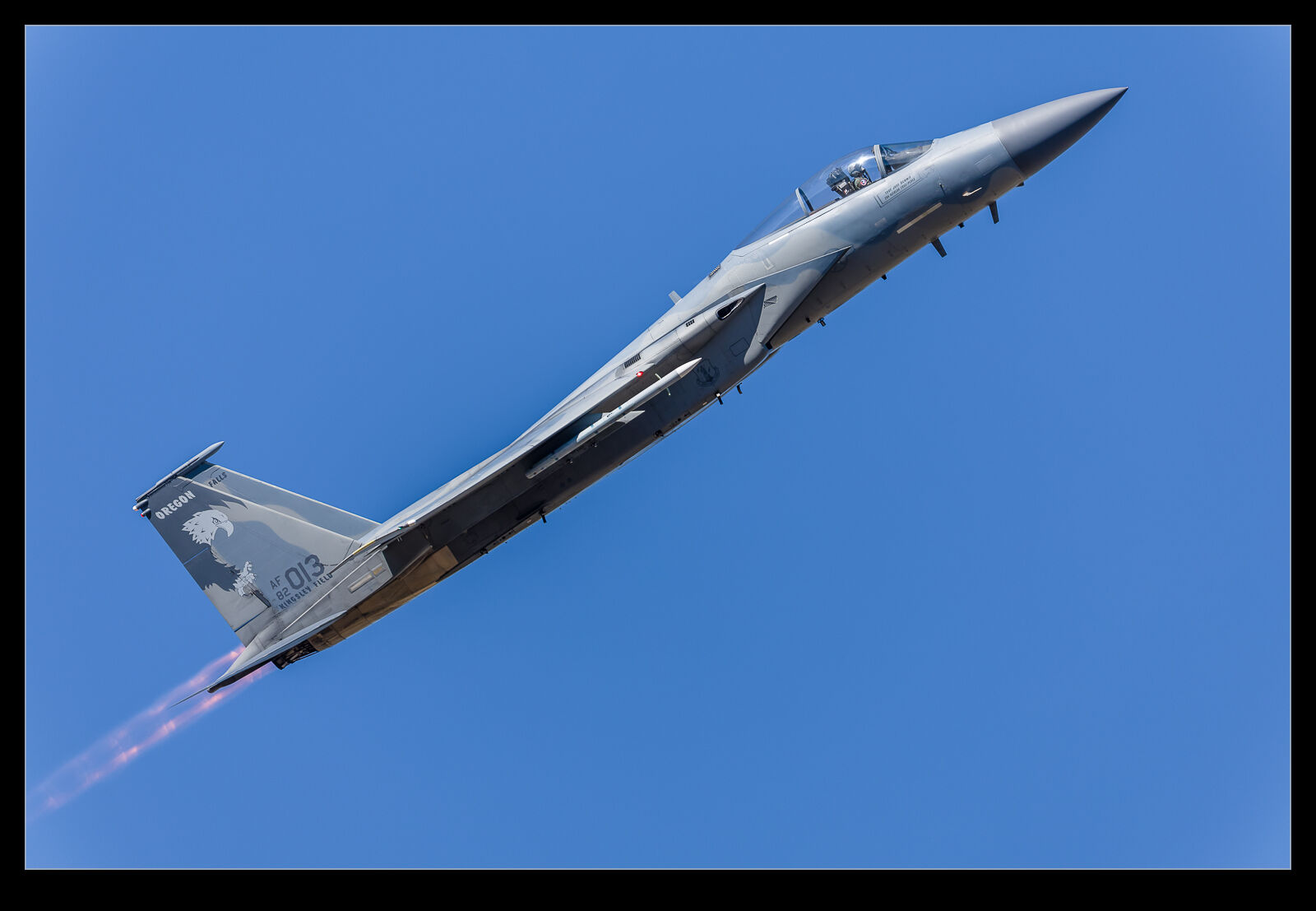 Then they would each pull hard to the vertical and blast upwards.  The first one caught me off guard a bit – not ideal since this was the special paint jet.  It turned out I got some shots of it, even though I found myself, twisting awkwardly to try and keep it in view.  The others I had a slightly better idea about and was ready to track them as they went. 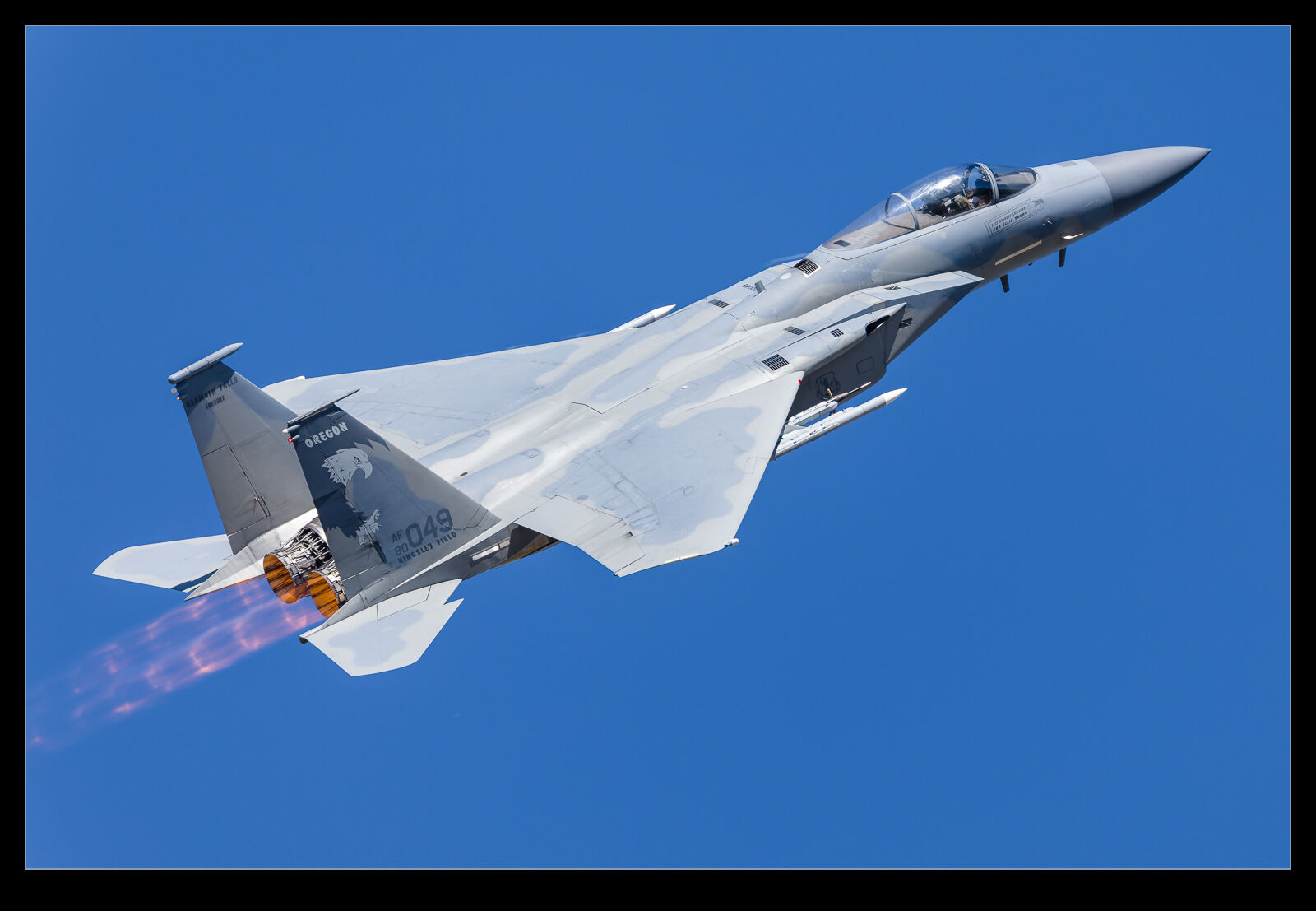 This was just the beginning of our day at Klamath Falls and it was indicative of what was to be a top time. 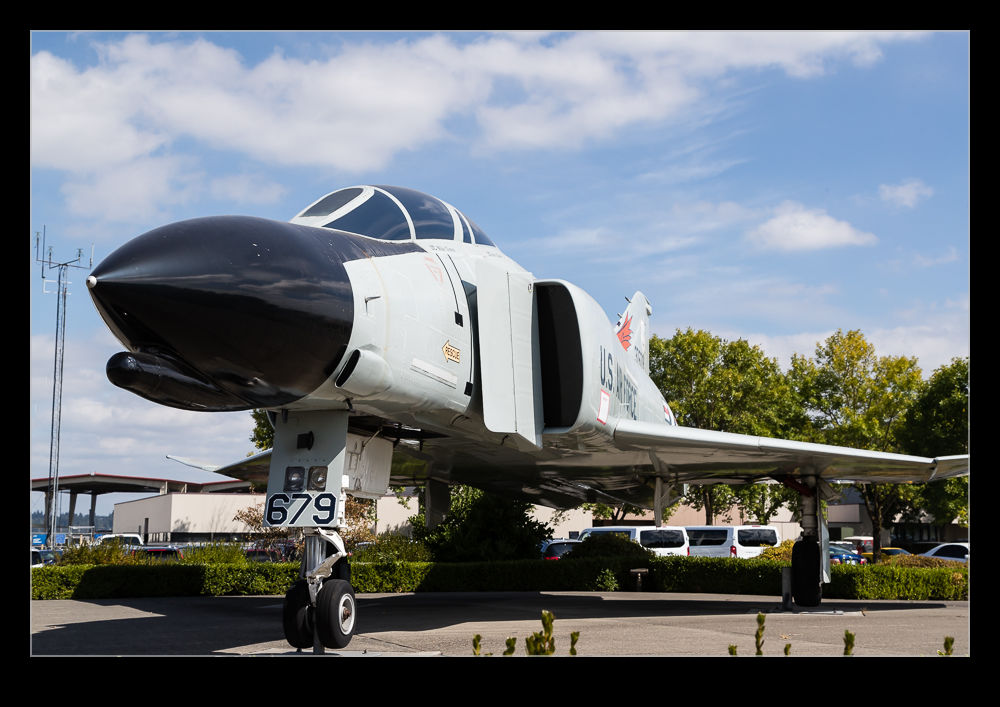 The 142FW of the Oregon ANG has operated a number of different types over the years.  It was nice to see that the base has preserved some of the jets.  As you come through the main gate, the grass area to your left has an F-15A mounted on a pole looking suitably dynamic and reflecting the current jets used by the unit. 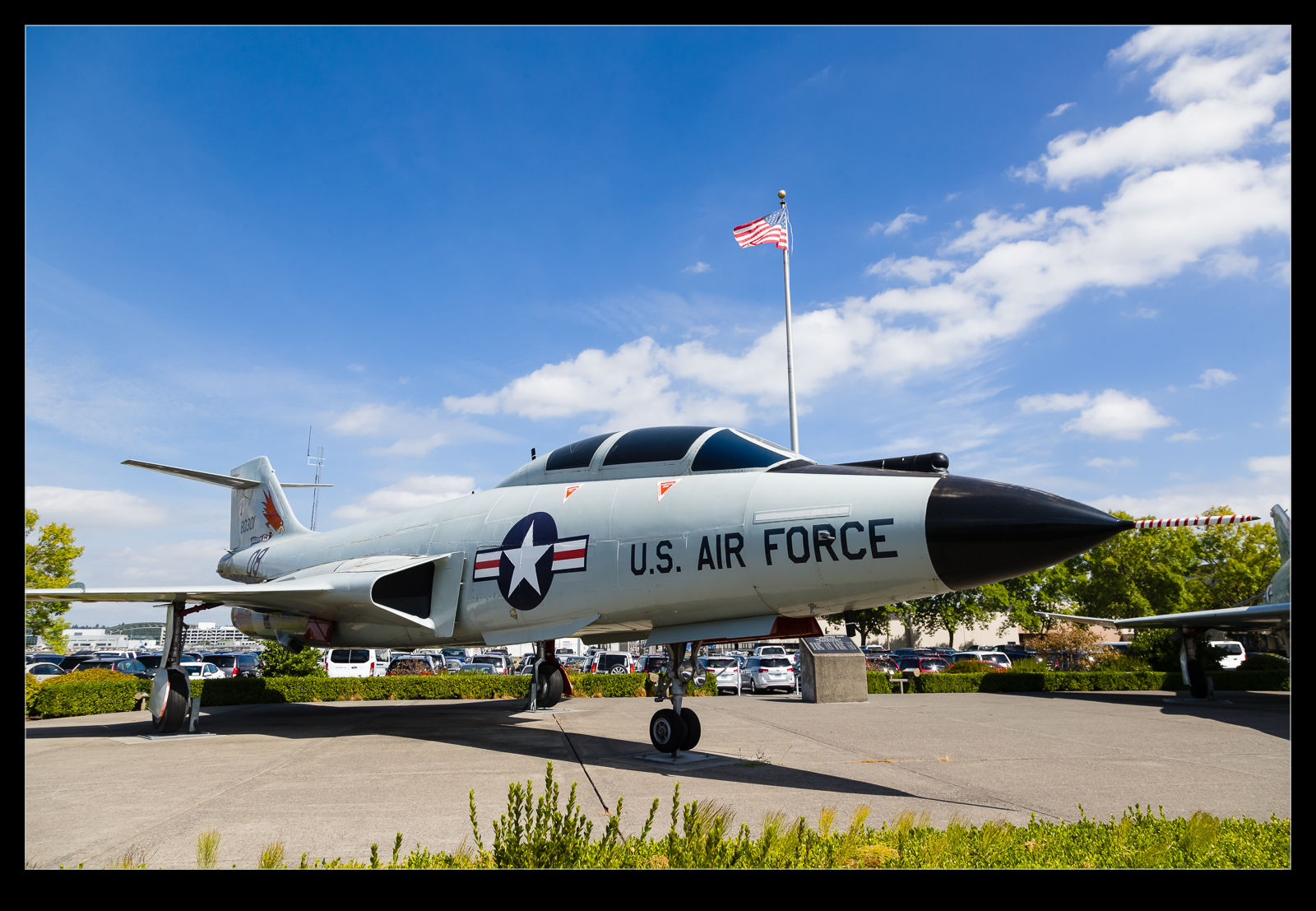 A short distance away is a memorial park with two further jets.  Both of these are in great condition (the F-15 looked a bit weathered from a distance).  There is an F-4C Phantom which is nice but the one I liked the most is an F-101 Voodoo.  The Voodoo is a jet I never saw fly.  I have seen various examples on the ground over the years but there is something about the lines of the jet I just like.  Oh, to have seen them in action. 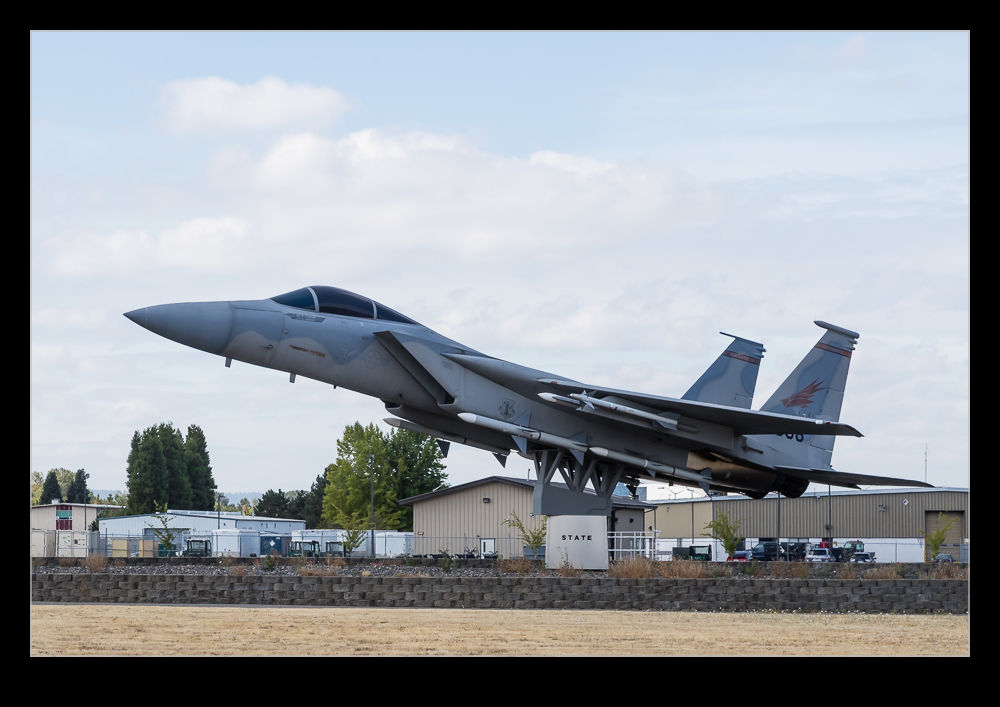 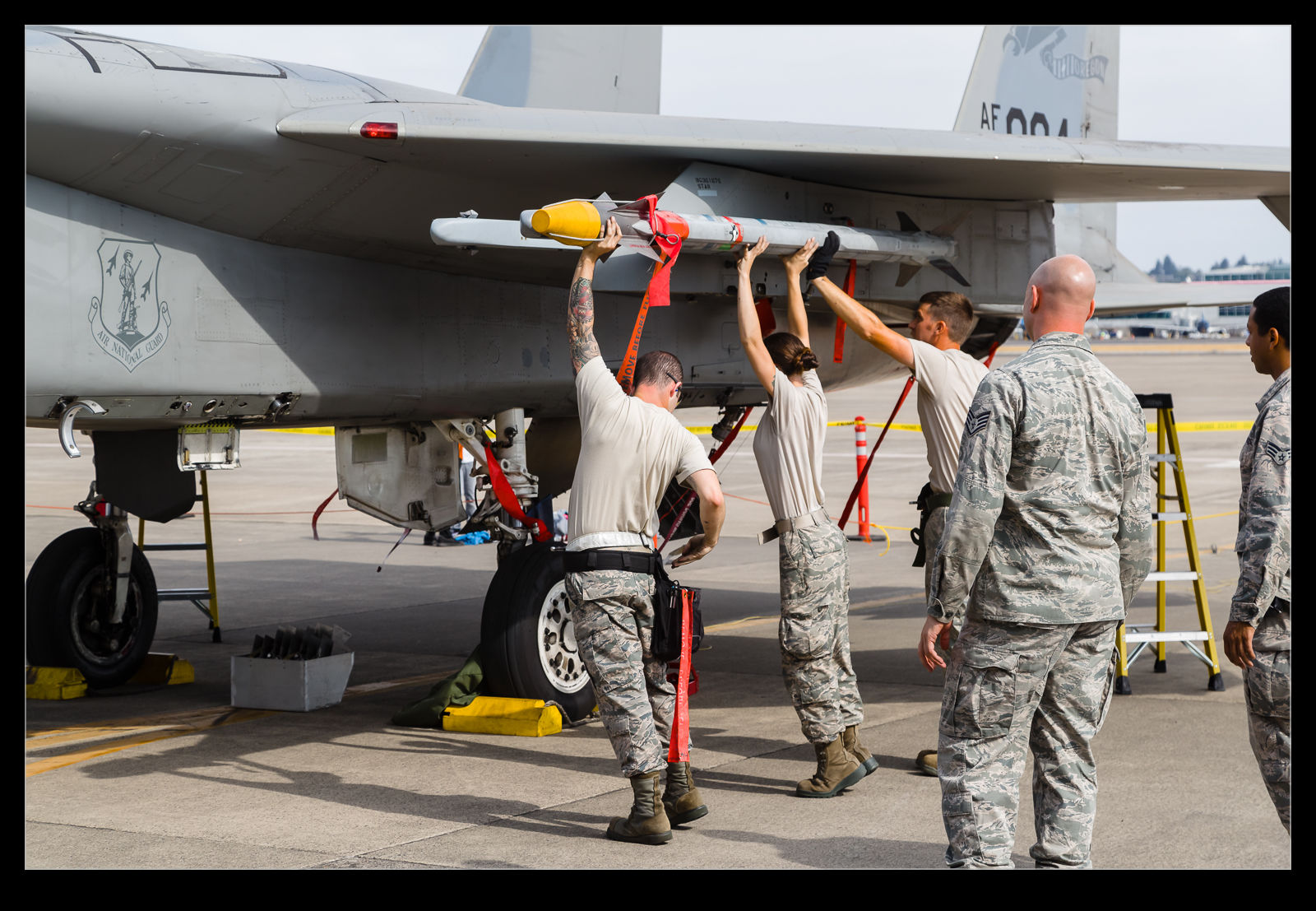 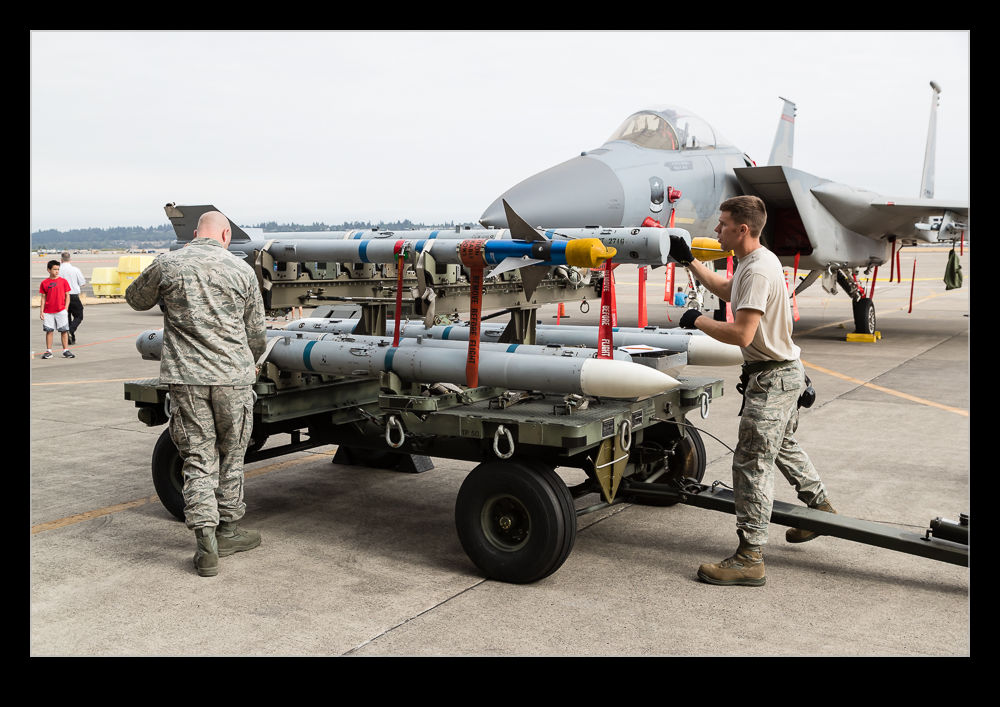 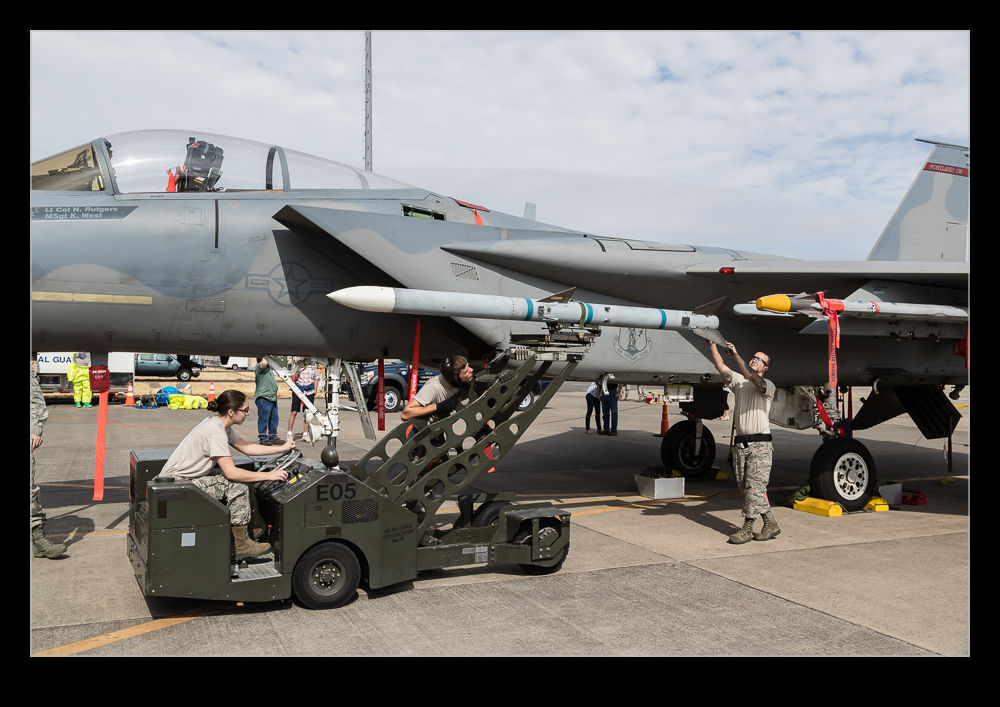 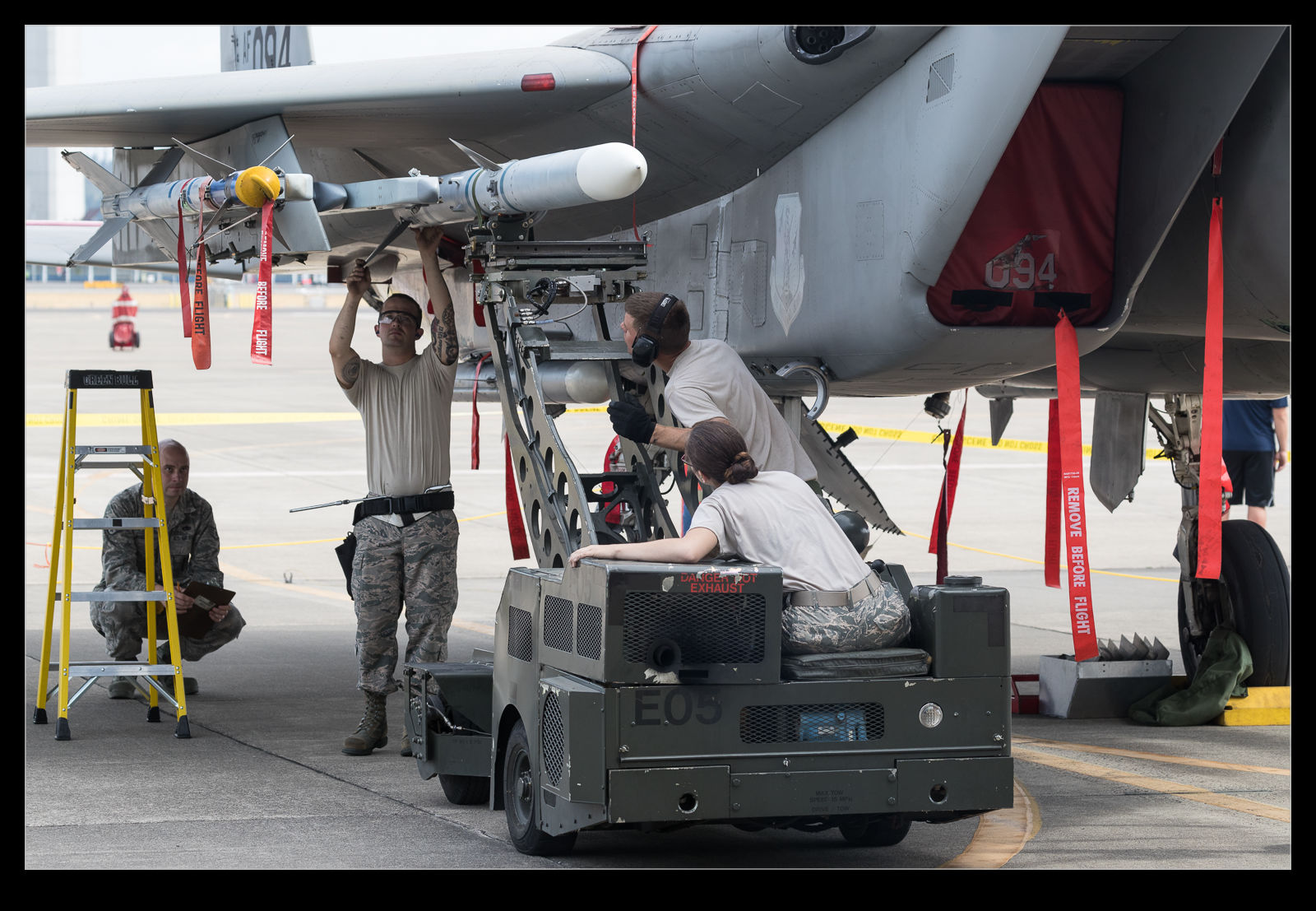 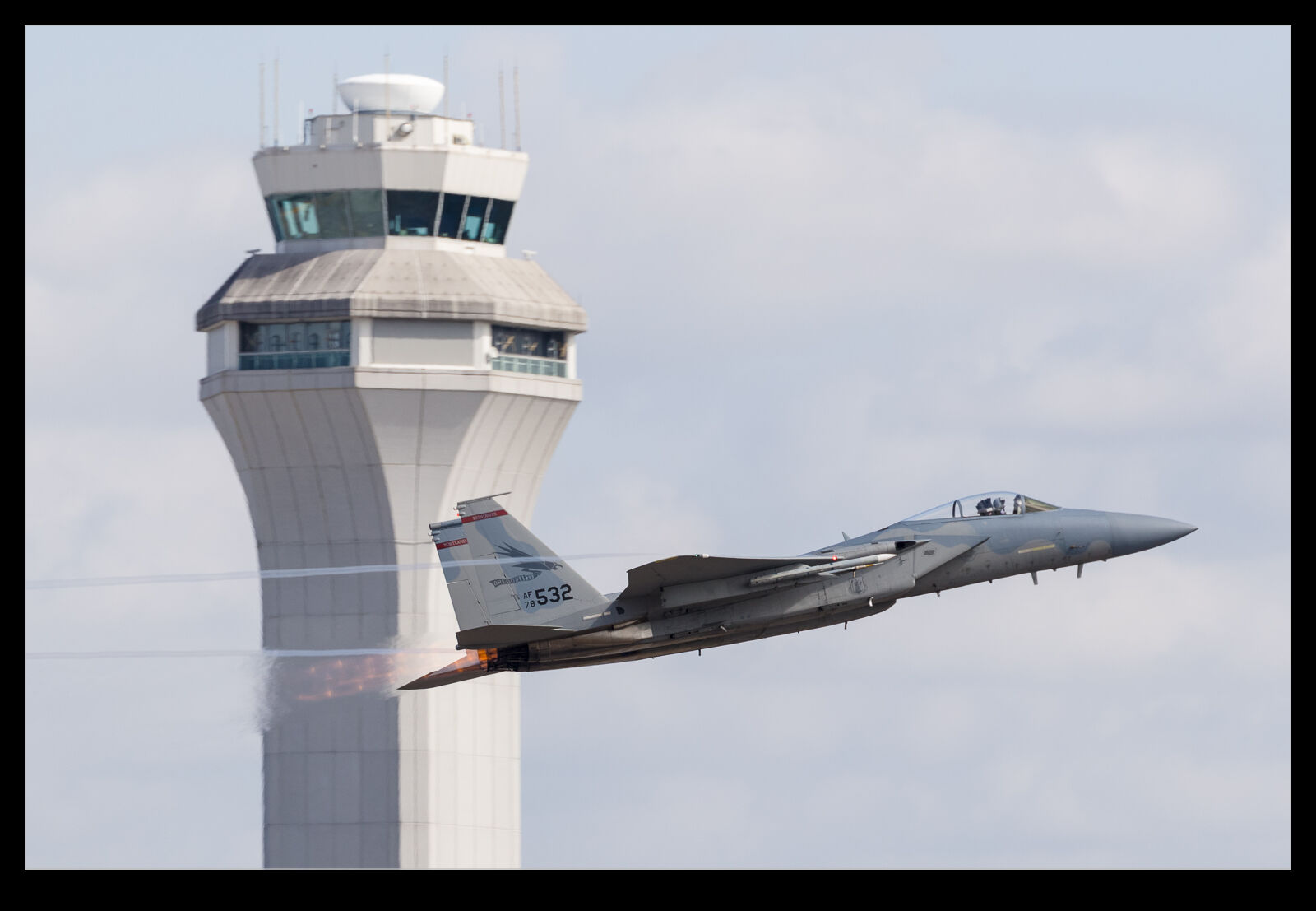 The 142nd FW of the Oregon ANG is based at Portland International airport.  They held an open house one Saturday morning and I figured a trip down was worth it.  I put together a piece for Global Aviation Resource on the visit which you can see here if you want.  The event was aimed at sharing the work the unit does with the local community that is probably well aware of their presence courtesy of the regular launches of F-15s from the runway at the international airport. 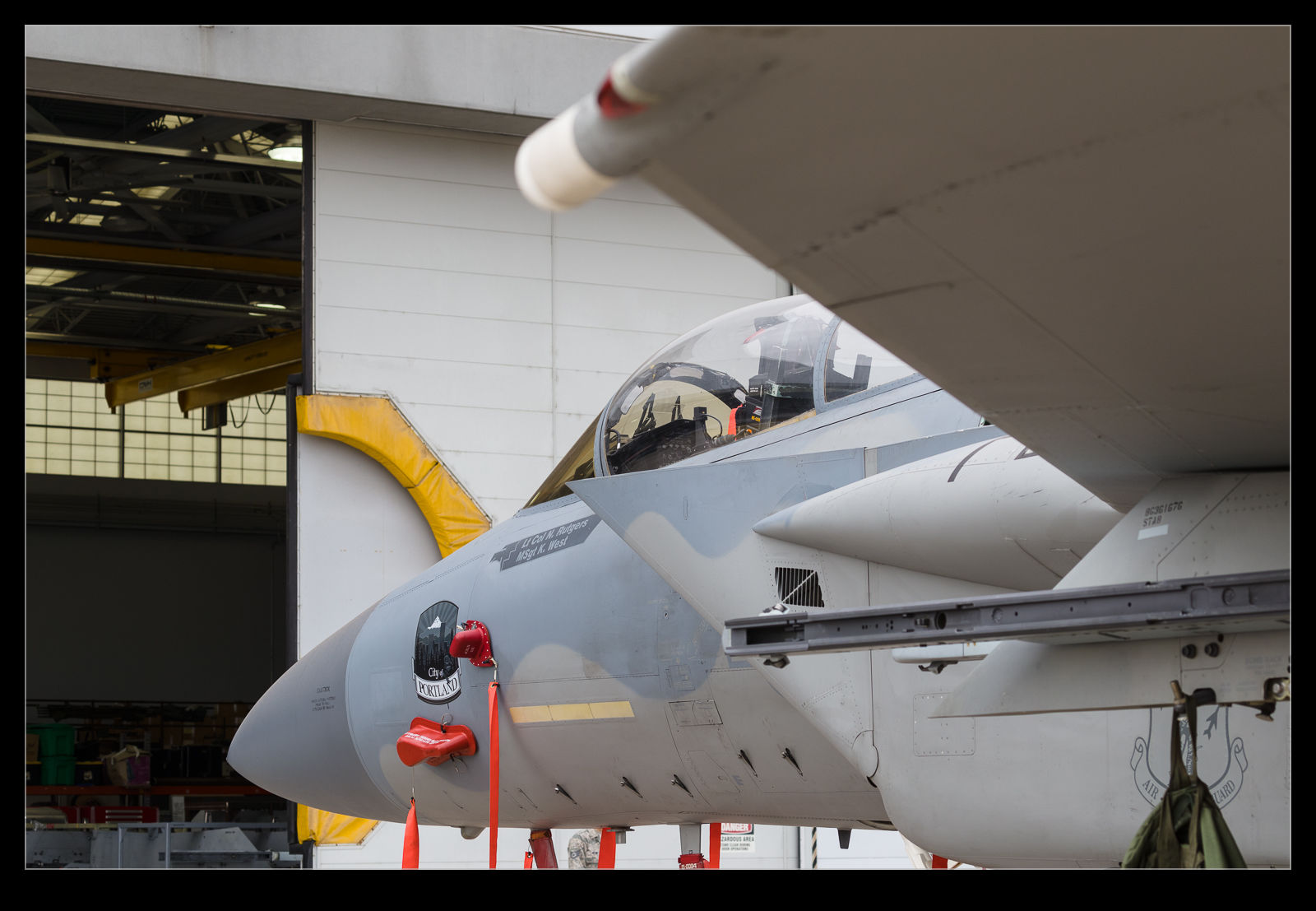 They had a couple of the jets for people to take a look at.  One was out on the ramp and you could walk around it.  Another was in the hangar with an access ladder to the cockpit (devoid of ejection seat, just to be on the safe side).  They also had missiles and engines available to look at with people on hand to talk about them.  Meanwhile, the unit launched a few waves of jets.  They taxied out from the shelters a short distance away and, given the distance to the threshold of the runway, the F-15s were airborne well before they even came in to sight.  Fortunately, they did keep them low and fast until they came by our location.  Then they pulled up rapidly.  Each departure was appreciated by the spectators! 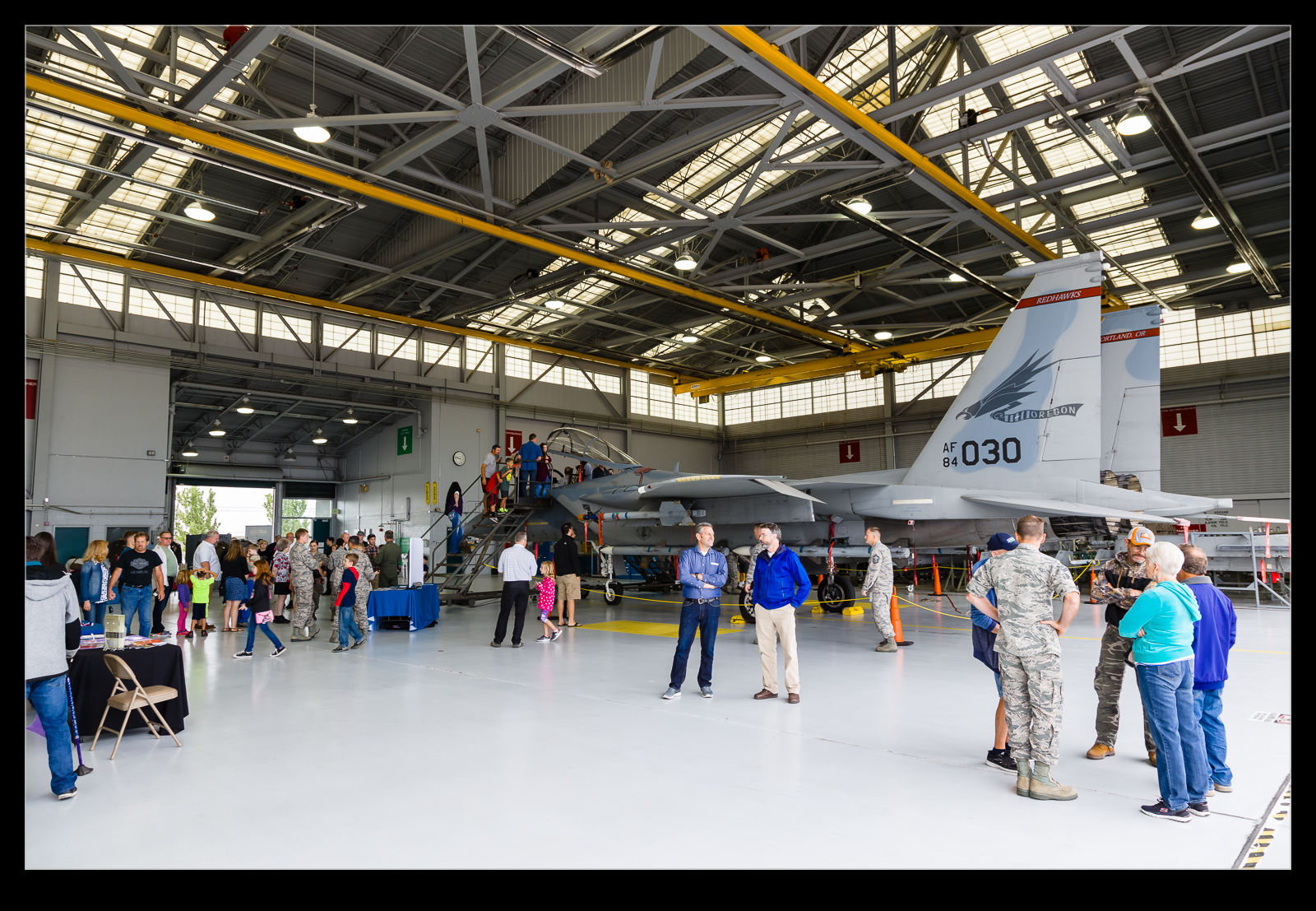