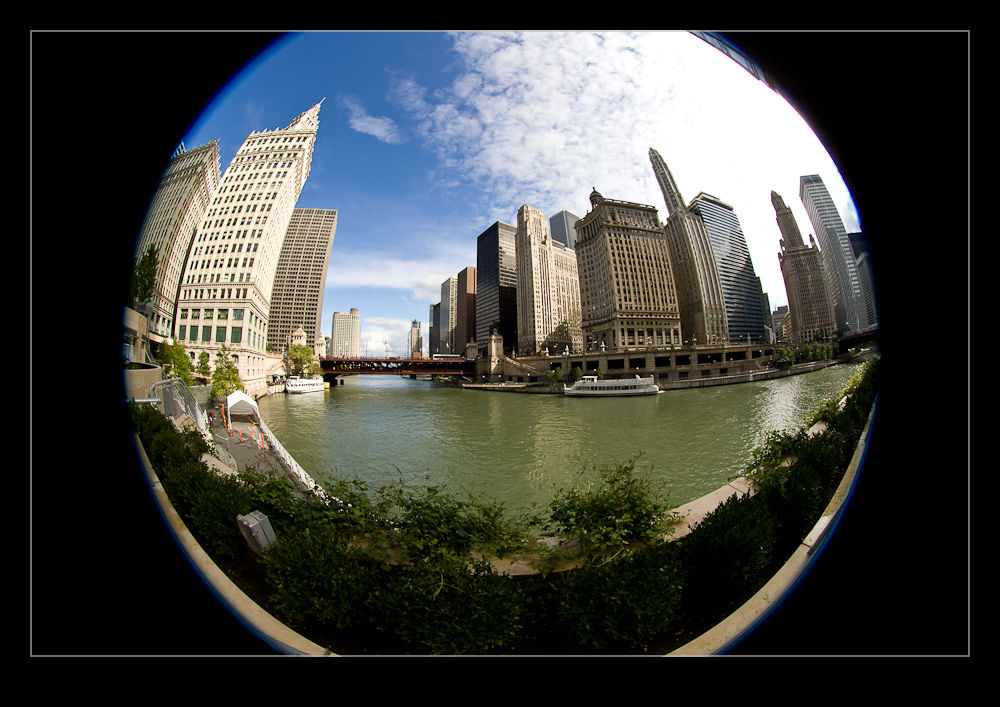 Let’s get the statements of the obvious out of the way first.  Yes, I am a bit of a “gear head”.  I am quite partial to stuff!  Does this mean that I sometimes get things that I don’t necessarily “need”?  Yes, of course.  Having got past that, let’s move on. 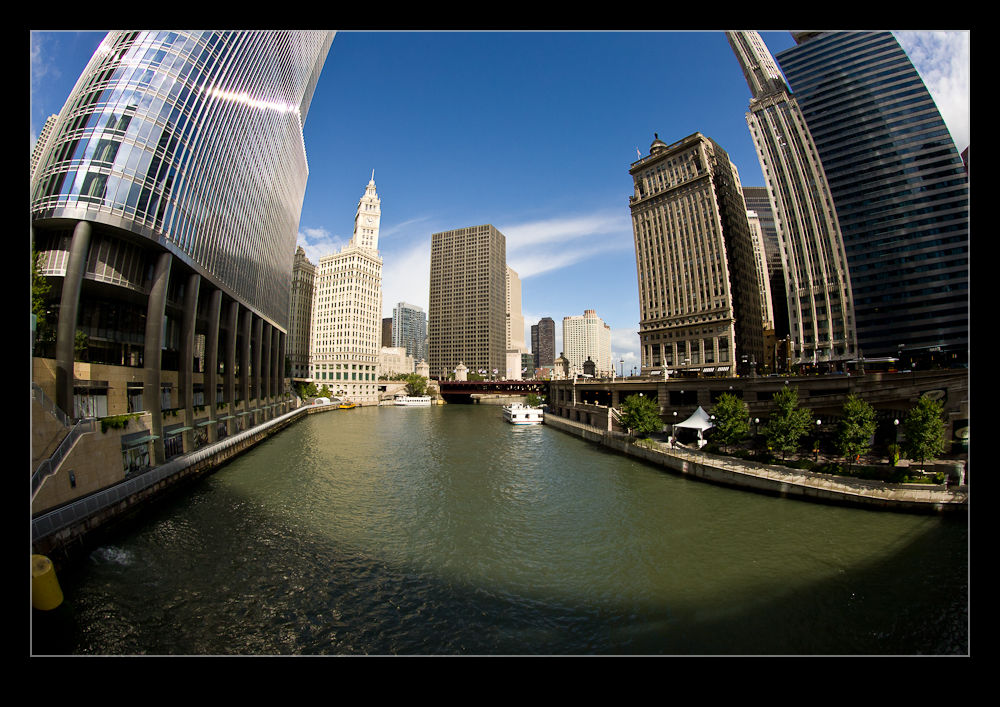 One thing I have been pondering for a while on the lens front was a fish-eye.  Not something that is needed on a regular basis but something that has its moments.  Canon had a couple of fishes that I was looking at.  They had the 8mm fish and the 15mm fish, both of which had things that interested me.  Which one was better for me?  My two main bodies are 1.3 crops but I do have a couple of APS-C sensor cameras which have the 1.6 crop.  All of this impacts the effect.  Besides, when buying lenses, who knows whether I will have a full frame camera at some point. 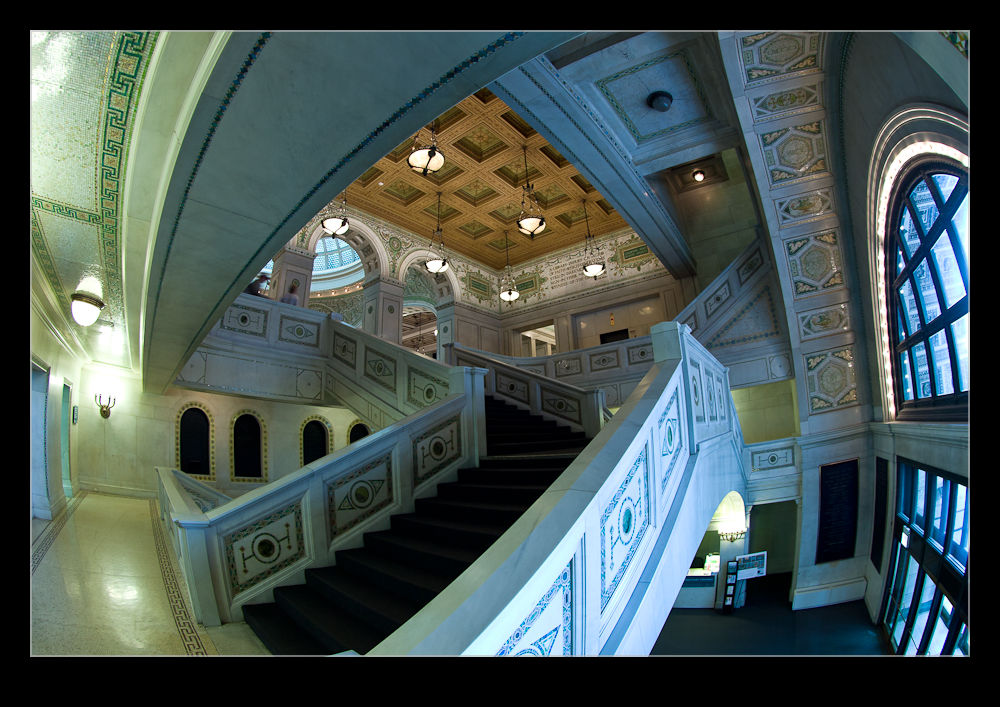 The result of all of these variables was that I never bought a fish-eye at all.  I just pondered what I should do at length and did nothing in the mean time.  Imagine, then, my delight when Canon announced the introduction of the 8-15mm fish-eye zoom.  Have they been bugging my thoughts to find out what I want?  I guess so.  That reminds me, I must start thinking more about other things I want them to develop! 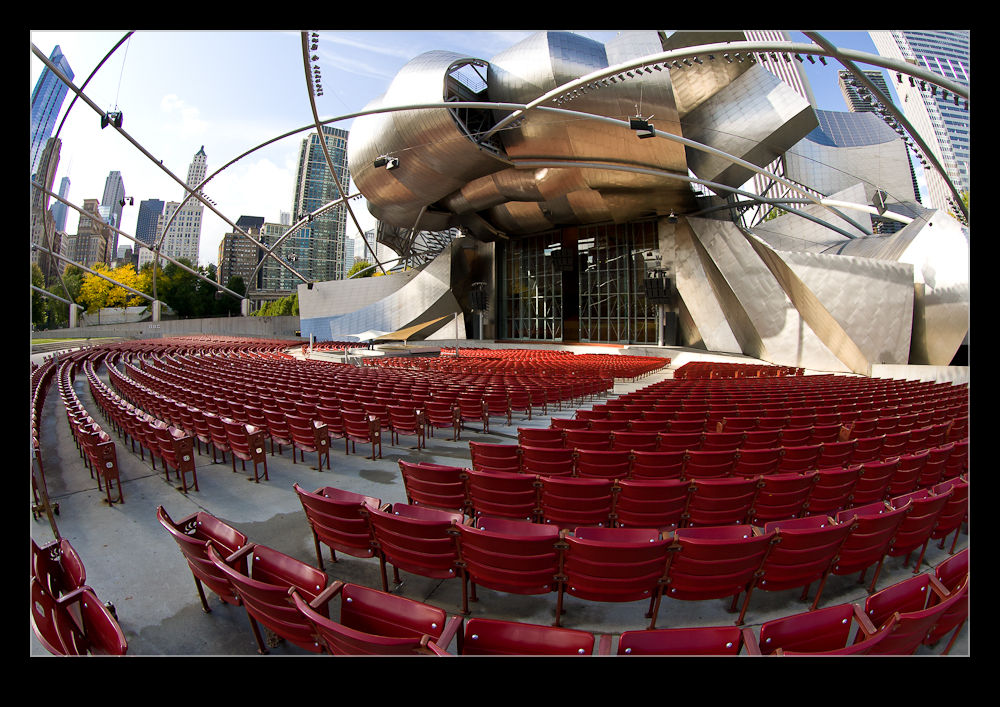 Of course, the announcement of a new lens does not mean the availability of a new lens.  Recently, it seems the announcement can be far ahead of the delivery.  Obviously the issues in Japan resulting from the earthquake and tsunami have had a major impact but I suspect there is more to it than that.  Anyway, the thing is finally in the wild.  My friend Jim Koepnick was the first person I saw to have one.  They would appear in stores and be gone almost as fast.  No biggie since it wasn’t like I had been struggling without it.  Once they were regularly in store I placed my order. 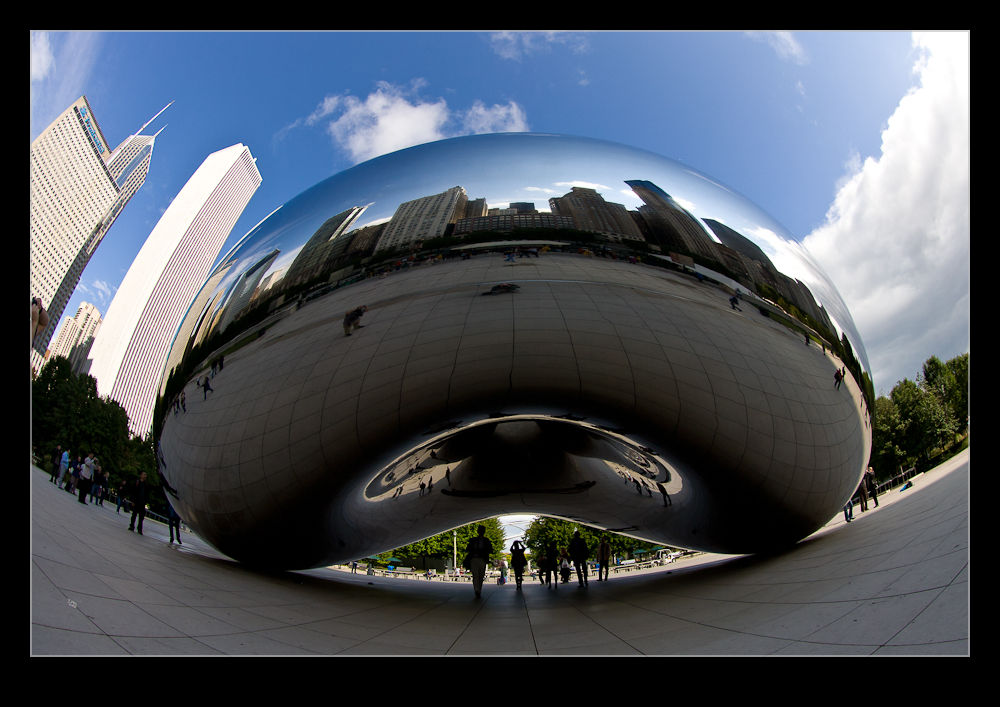 I have to say, I love the thing.  It feels great in the hand and, despite what I have heard from some reviews, I have had no issues with the lens cap.  It is also a chance for me to start learning what can be done with such a lens.  There are the obvious effects you can get and the access to a lot of width in tight spaces.  However, it can also create interesting effects by changing the angle at which you hold it. 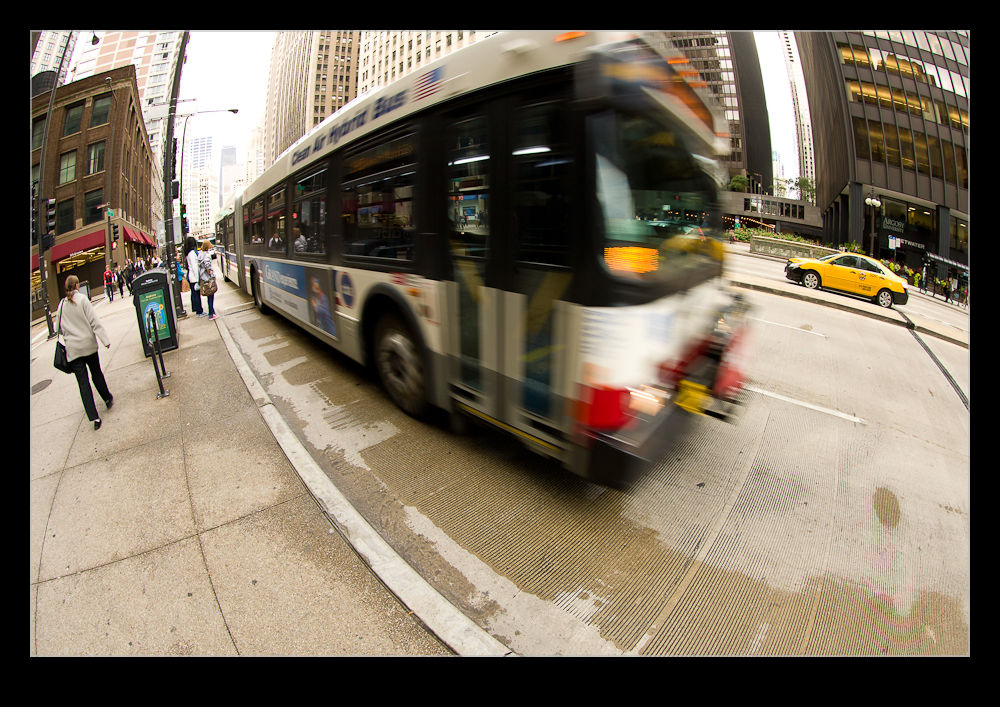 I went out in the city to give some time to experimentation.  I ended up in Millennium Park which is a slightly odd place to play with a fish since many of the features already have a slightly “fishy” look to them anyway.  Of course, that does sometimes allow the subject to be more tolerant of some distorting effects.  It was a fun place to shoot since it is always busy and getting close and using the fish provides some options as well as making surrounding people disappear into the background quite quickly. 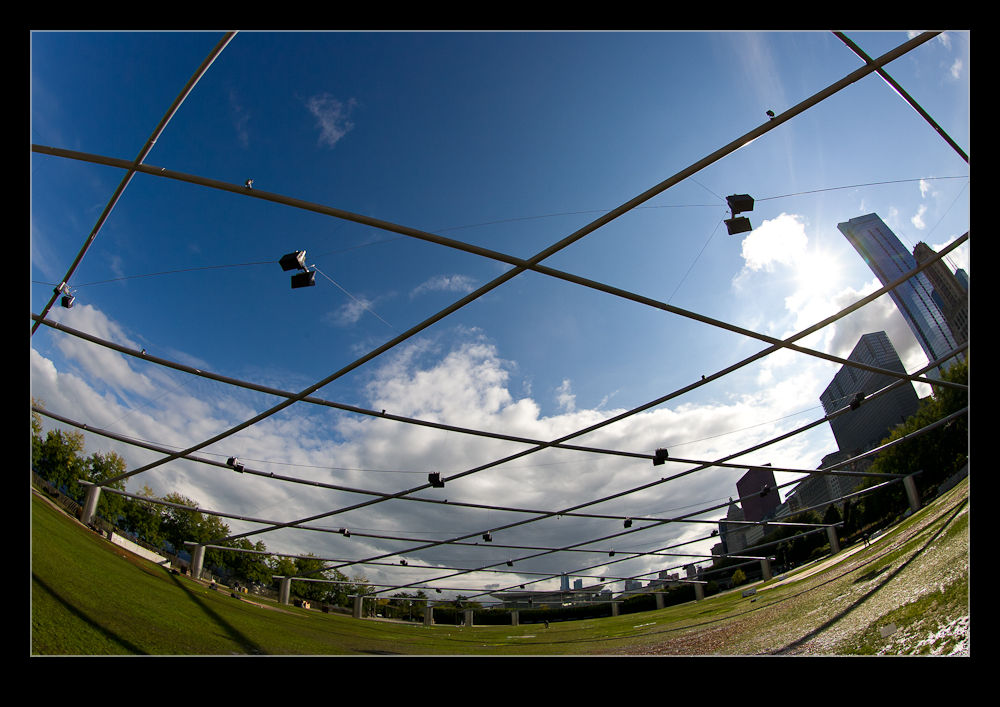 I also played around with a couple of effects.  There is a metal frame across the lawn at the Pritzker Pavilion.  By tilting the camera down, I could really emphasise the curvature but by tilting it up, the frame became almost totally flat.  Something to remember.  I also played around with slightly rotating the camera.  This made the edge of the frame level and the receding horizon appears to turn up dramatically.  Not something to overdo but still a concept to remember for the future. 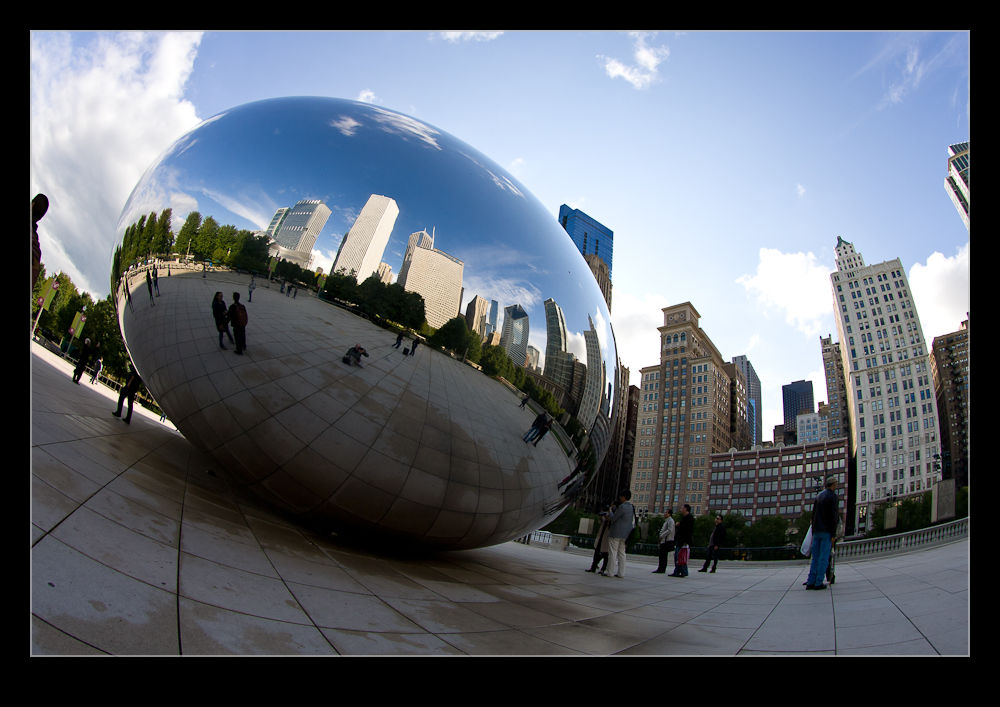 I am certainly happy that I have added the fish to the arsenal.  Now I have to make sure I make good use of it without slipping over the edge into using it when I shouldn’t.  Hopefully my friends will warn me if that is the case.  That, and I have to remember to keep myself out of my own shots!