The storage facility at Davis Monthan AFB in Tucson AZ is very famous. The storage of so many airframes that are either gradually being broken down for parts or that have the potential to make it back into service is well known and has been the subject of many books and articles. Getting access to the facility is a bit harder than it used to be but there is a tour that is run each day from the Pima Air and Space Museum across the road from the base.

The tour is on a bus that doesn’t allow anyone off so it is not ideal either from a photography perspective or from the point of view of exploring the more unusual aircraft. However, it is a simple thing to do so making the trip on the bus was the option I went with when I was there a few years ago. The bus had tinted windows which affect the photos quite a bit and you are stuck on one side of the bus so anything on the opposite side is a case of seeing what luck you have shooting across the bus. Reflections are a constant problem of course. 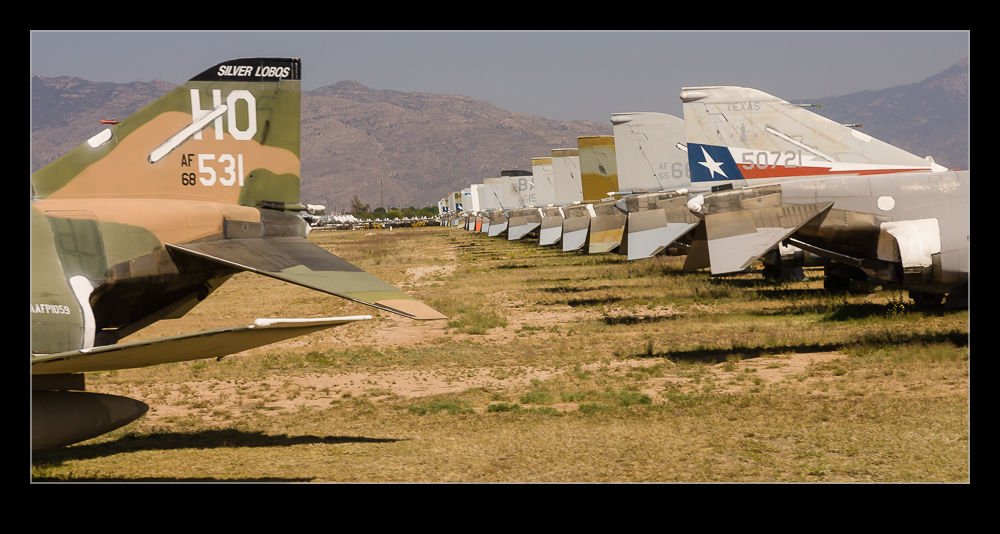 The storage facility is exactly as you imagine it would be. The lines of aircraft of the same type are very cool. It really doesn’t matter what the type is. Seeing so many of one type together, often with a wide variety of unit markings, is impressive. The big types like the C-5, the C-141 and the B-1B dominate their areas. The smaller types can be scattered in amongst them. Some look rather forlorn, often without the gear any more, mounted on wooden frames. Other locations have parts stacked up. A selection of wings from A-10s were stacked in a row. At some point I need to make the plan to visit and investigate the facility in a lot more detail.