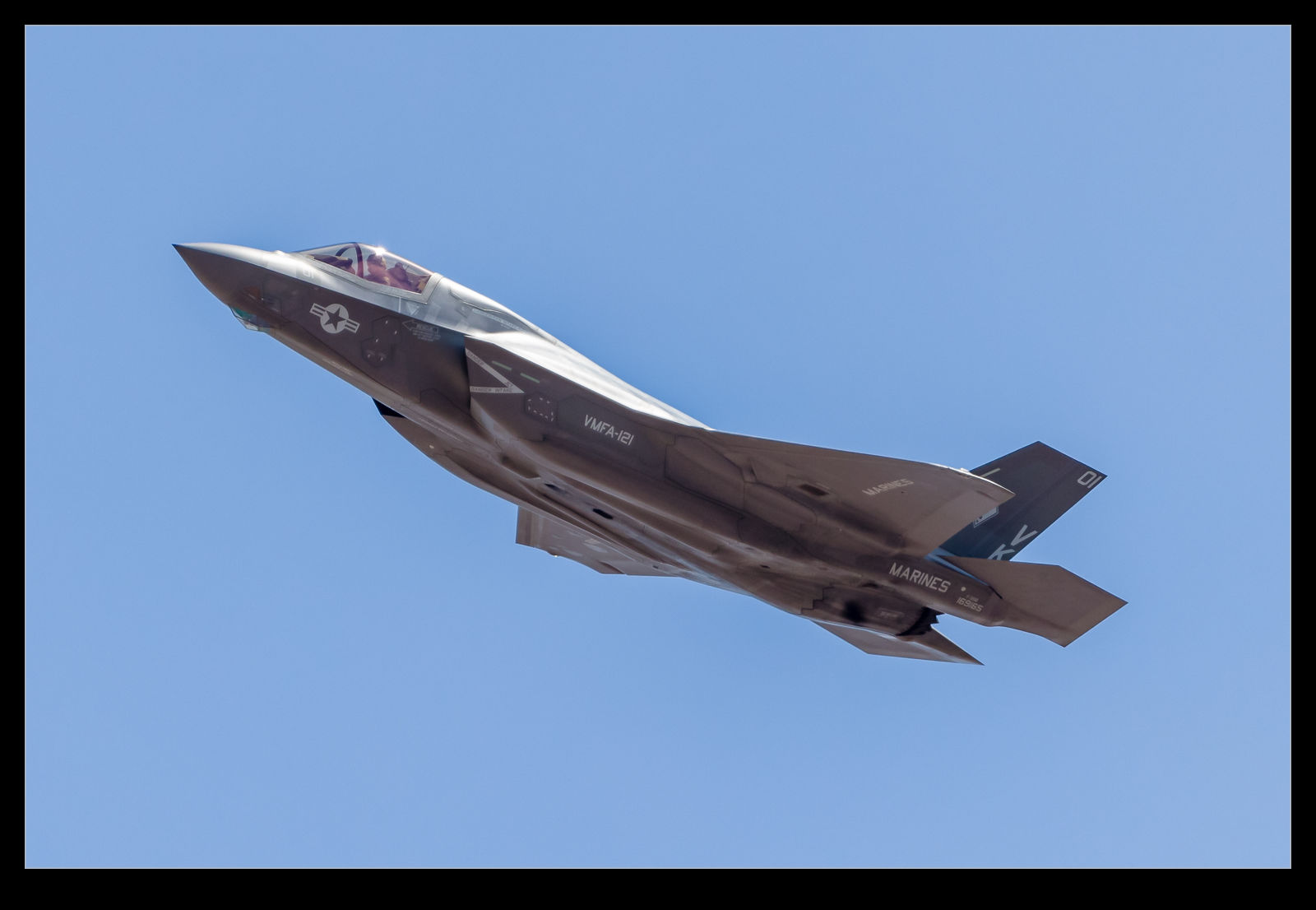 I have had a bunch of times when I have seen F-35 jets.  I got to shoot the first prototype at Fort Worth in its early days.  After that, I didn’t see any more for a long time.  As the production jets started to show up, I saw a number of them at Nellis AFB. Sadly, when we were on base we weren’t allowed to shoot them and when I was off base, I was always in a bad place to get shots of them.  As a result, I do not have many useful shots in my catalog. 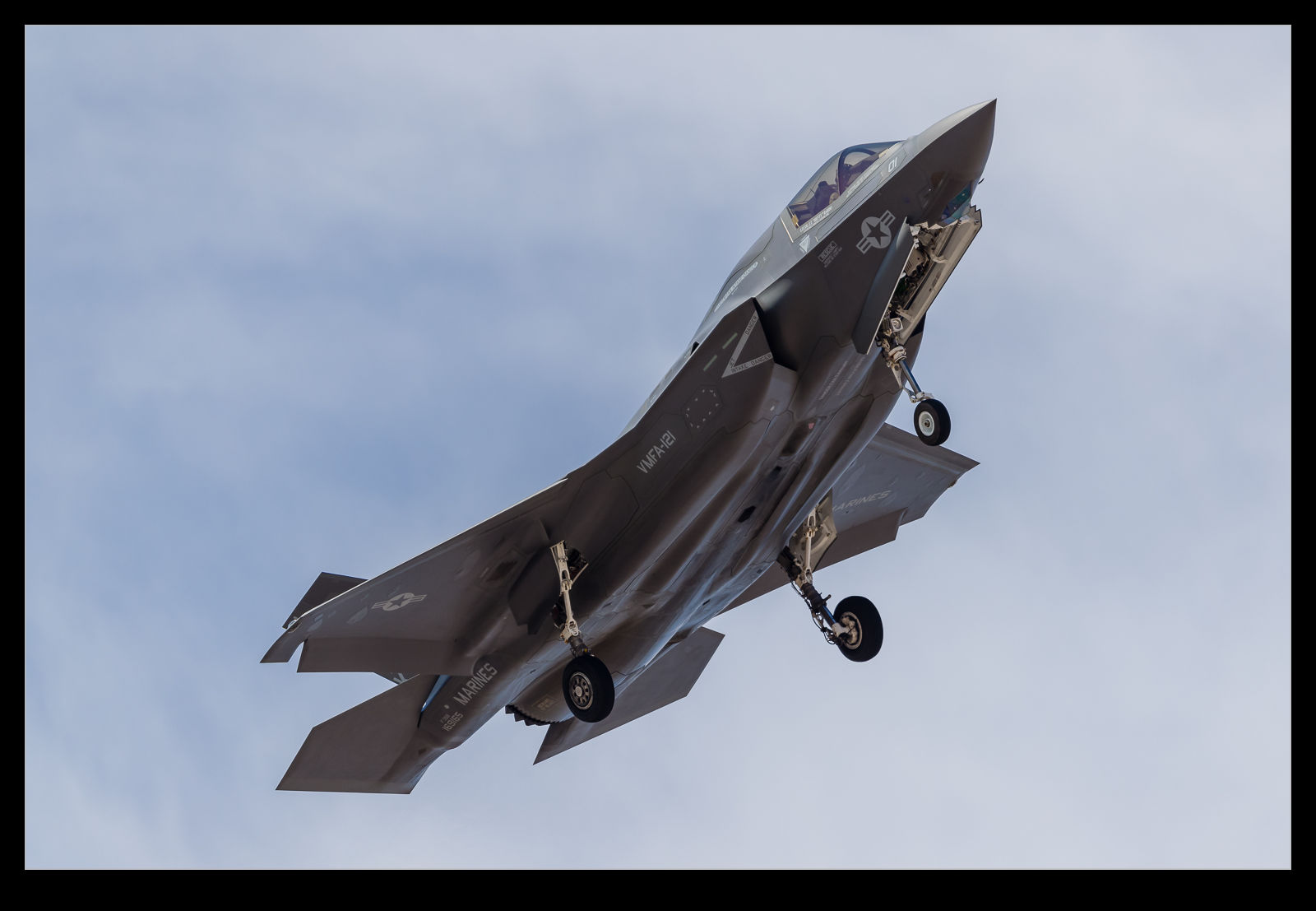 I had no shots of the B model.  This is the one being developed for the Marine Corps to replace their Harriers and Hornets.  It is also being acquired by the UK and Italy to use from their carriers.  Red Flag 16-3 was the first one that the Marines brought their jets to so I was pleased to get a chance to shoot them.  My timing was not great and there was limited flying while I was there.  However, the Marines did launch a pair while we were in place.  Nicely, both jets flexed on departure and came towards our position quite nicely.  Recovery was a different story.  For those that aren’t familiar with shooting at the Speedway, there is a constant debate about which gate is the best one to be at.  Some jets turn on to final very tightly and you need to be a inside Gate 4 to get a good shot.  Sadly, a lot of the jets turn long and they can be a long way off if you are at 4.  If there is a four ship, the later jets tend to turn later so, even if the first jet is good, the later ones can be a way off. 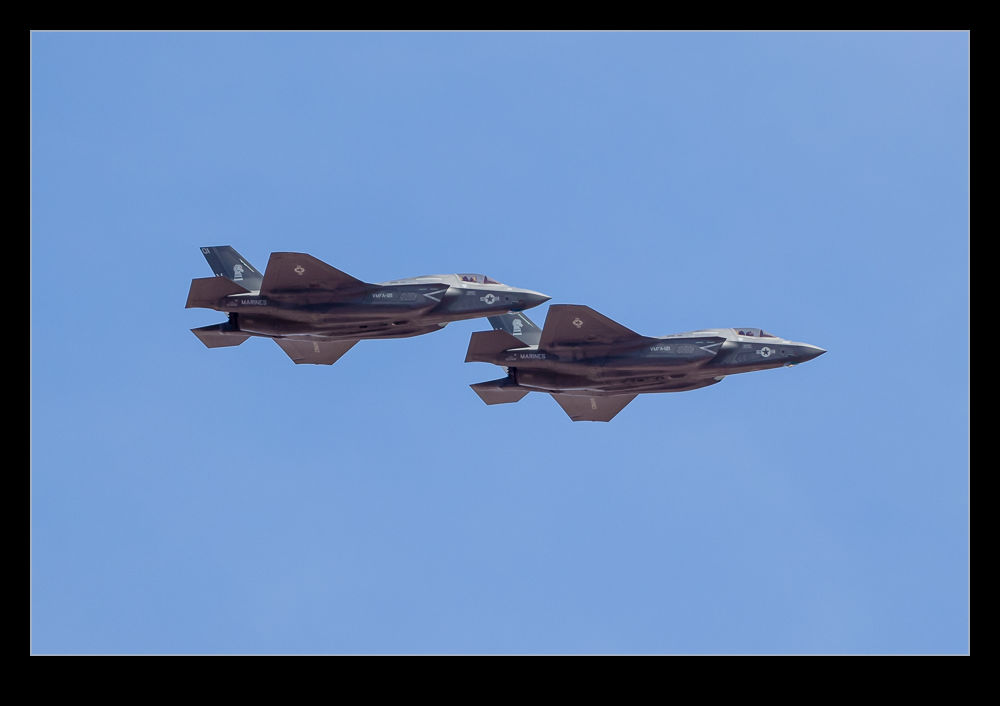 If the jets are Navy or Marines, you need to be on your toes.  They can be a lot more enthusiastic about keeping their patterns tight.  When the two F-35s returned, we soon realized everyone else knew something we needed to know.  They were all grabbing their cameras and running down the street.  I took a while to catch on.  The first jet turned very tightly.  Even as I ran, I could only get a head on shots as he turned inside me.  I then got moving again and was just about in a reasonable option for the second jet. 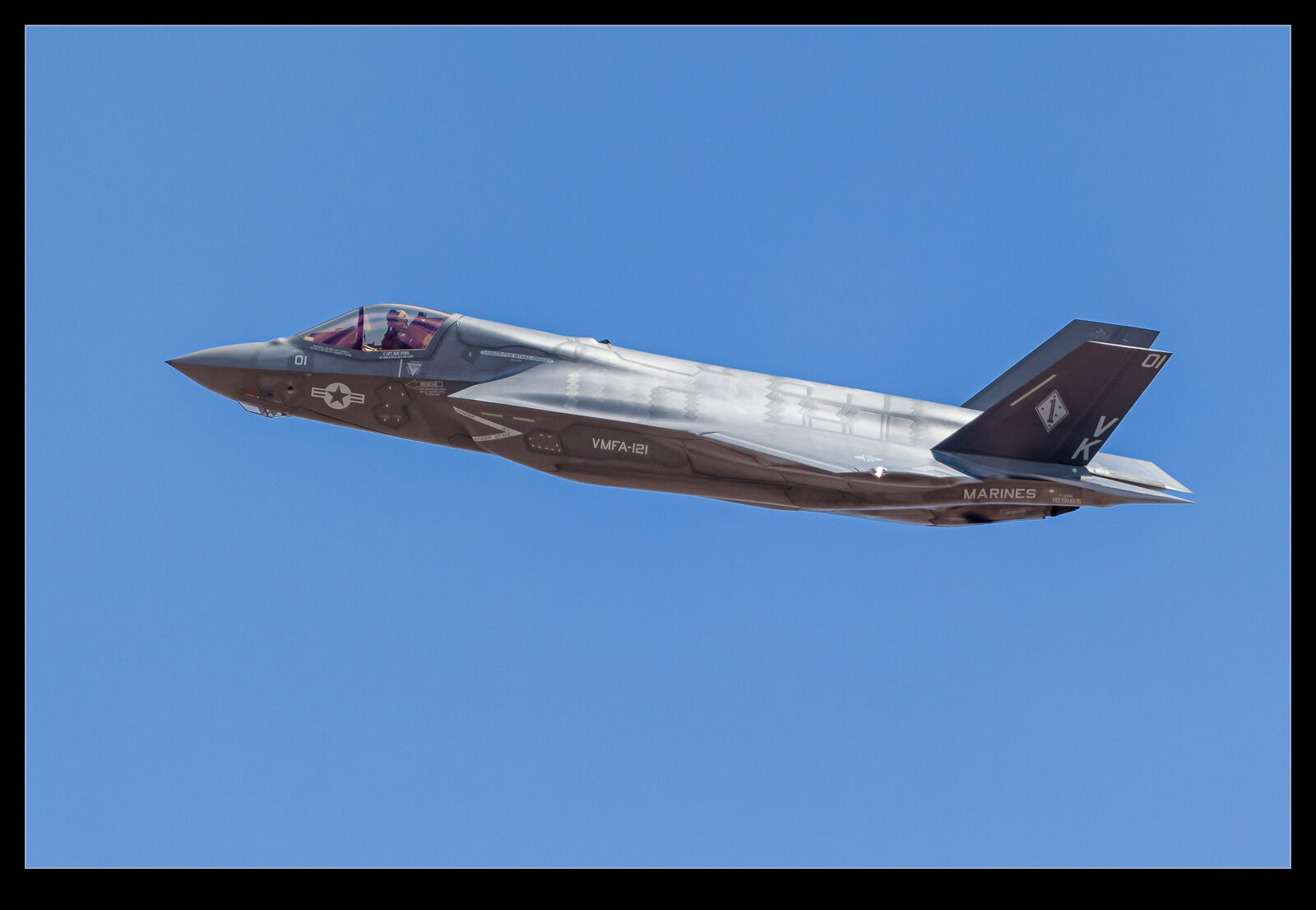 The second day we were there, timing was again not in our favor.  Just as the 35s were returning, a pair of Growlers were launching to head home.  They were coming off the runway we needed the jets to land on to get good shots.  Instead, they were sent to the other runway.  They broke left towards the hills.  We did have some recovery though.  By the time they had run downwind, the Growlers were gone and the runway was clear.  They switched to land on our side.  We had lost the final turn but at least they came closer when on final.  At some point these jets will be very common but the first encounter is fun. 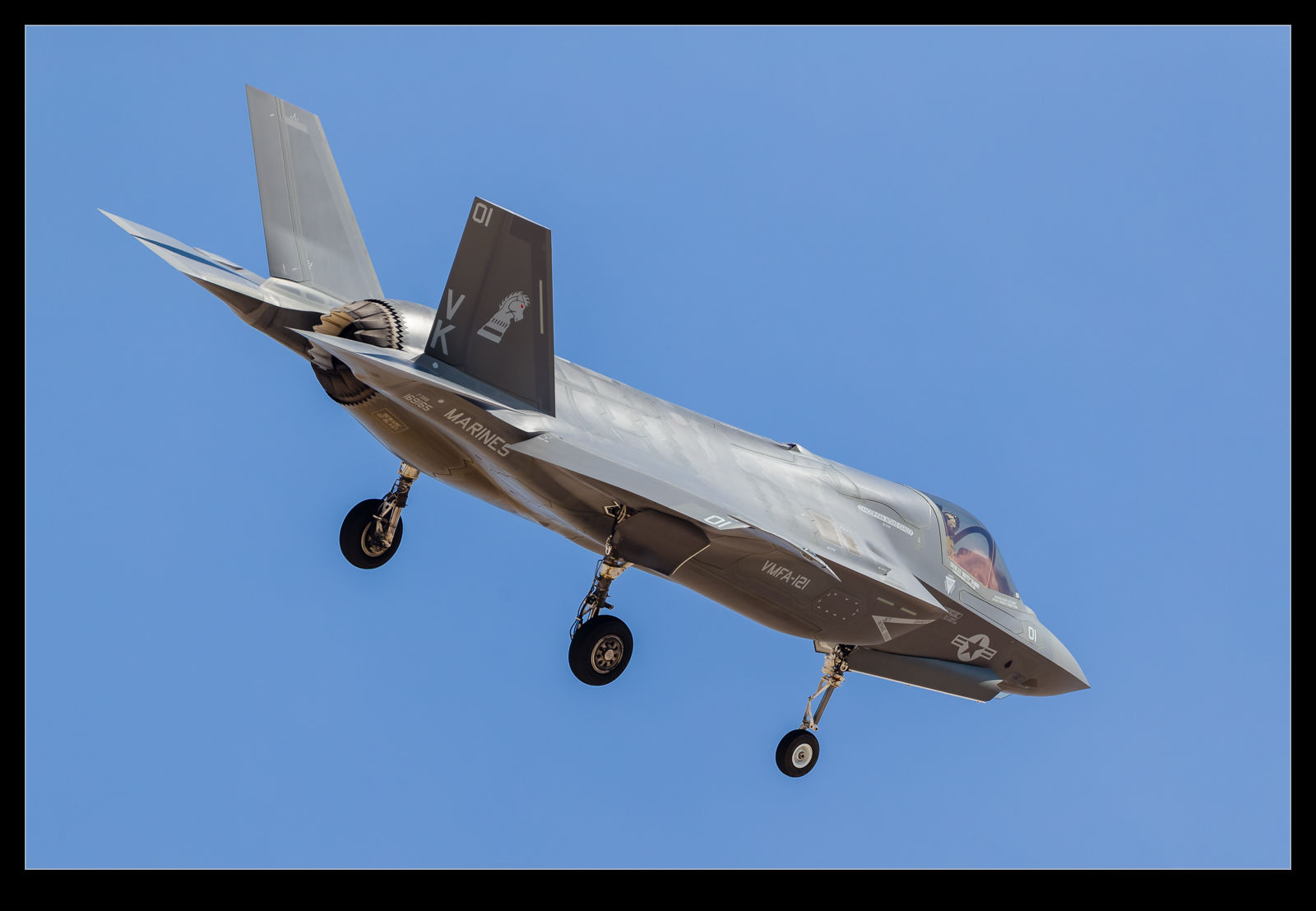 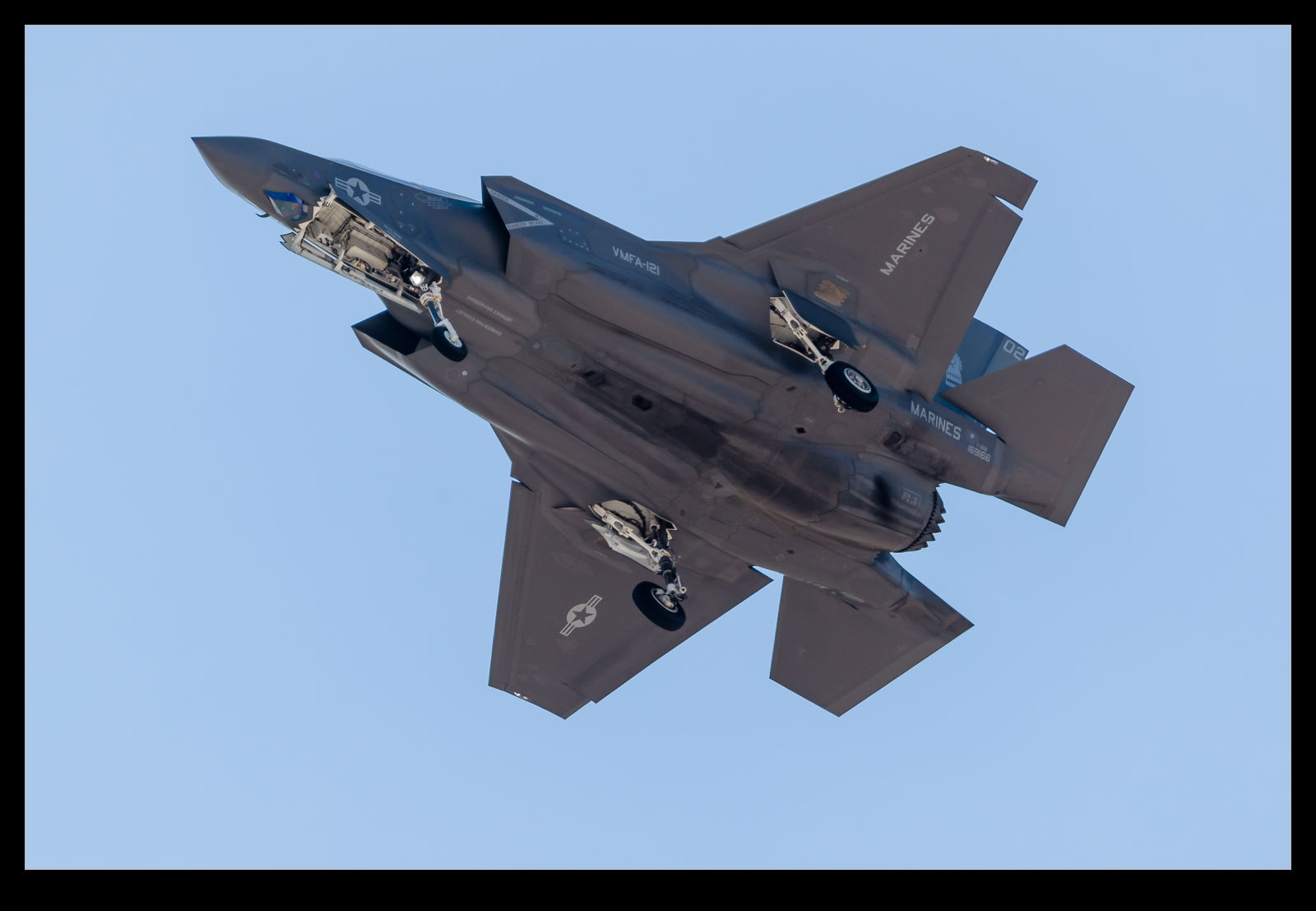