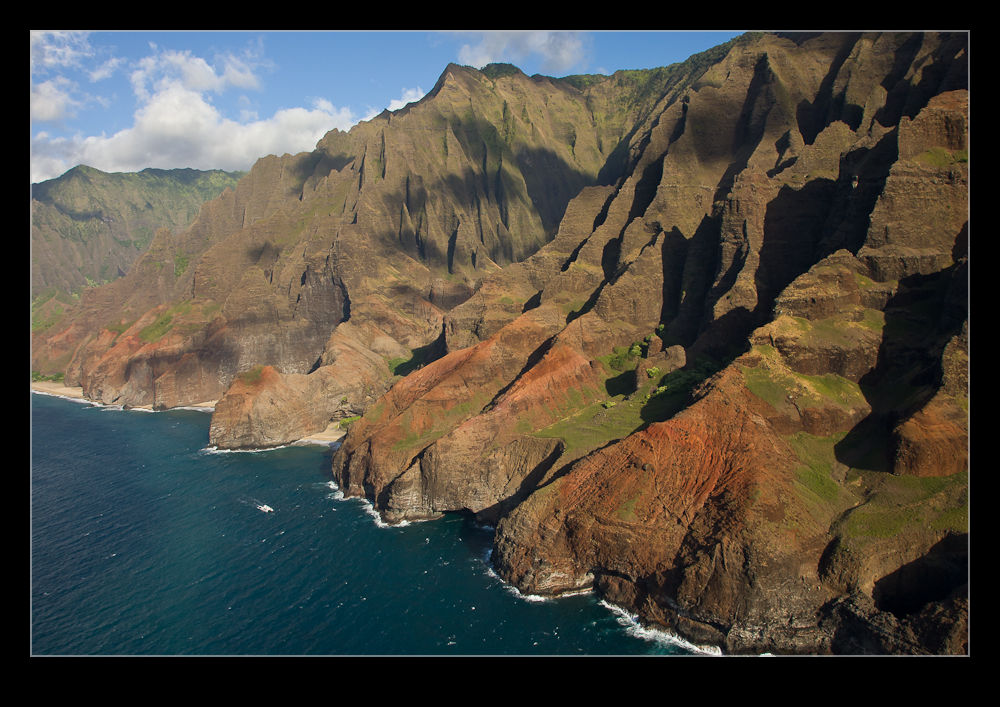 One of the most stunning areas of the island of Kauai is the northwest coast, known as the Na’Pali coast.  Unfortunately, (or fortunately depending on your point of view!) this part of the island is really hard to access.  There are no roads that go out to the coast.  There are hiking trails to get you there but these do require a fair amount of commitment on your part if you want to get there. 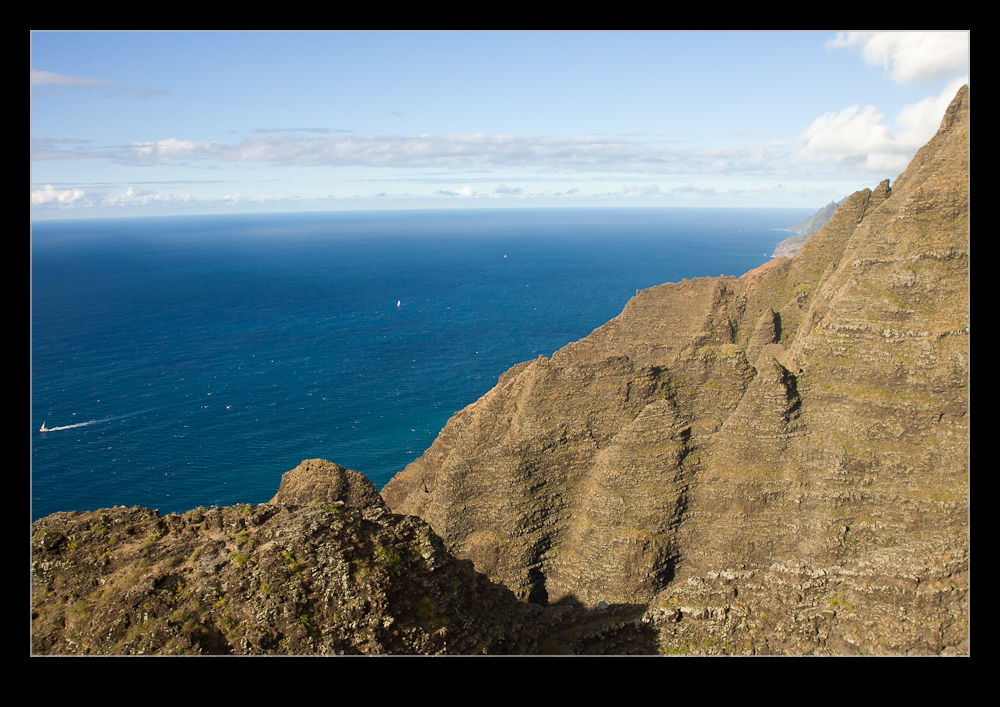 You can get boat trips to take you along the coast.  These trips are not particularly cheap but they do appear to provide an interesting experience.  We chose not to take one on this trip.  Originally it was part of the plan but the week was starting to get a little overloaded and this was supposed to be a vacation. 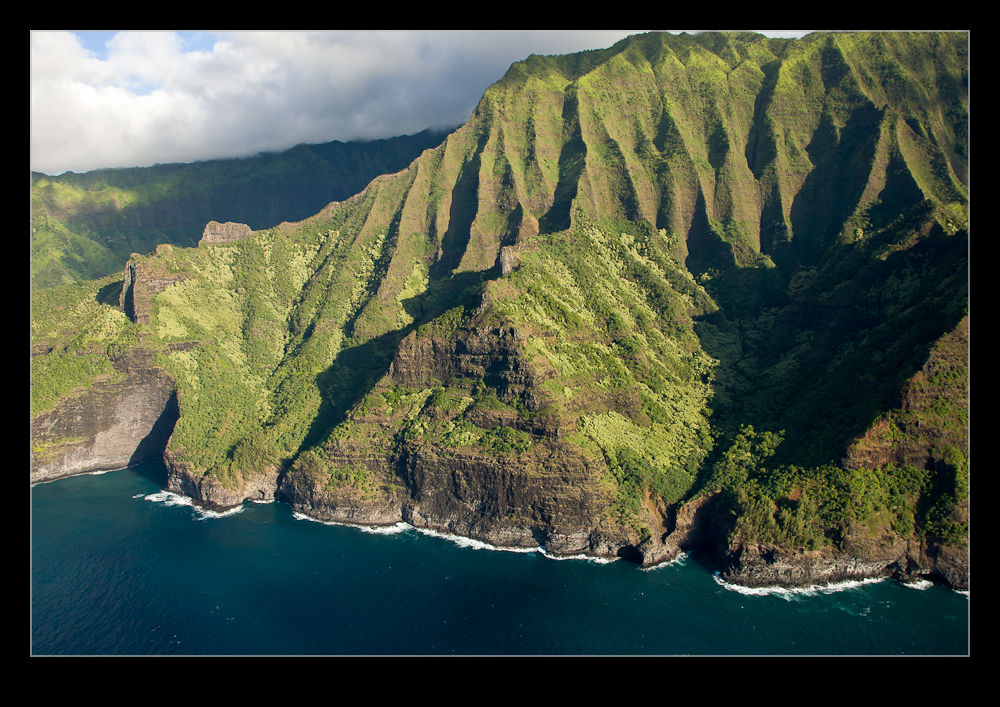 We did, however, have a plan for seeing the coast and this, I would suggest, is probably the best way to see it.  Go by air!  There are many helicopter operators on the island that provide sightseeing flights.  You can research which ones are of interest to you and why.  We went with Mauna Loa Helicopters.  They have smaller aircraft which we could charter for just ourselves.  No need to share the ride with anyone else.  Also, they are one of only tour operators that provide flights with the doors off.  This certainly makes for a better photographic experience. 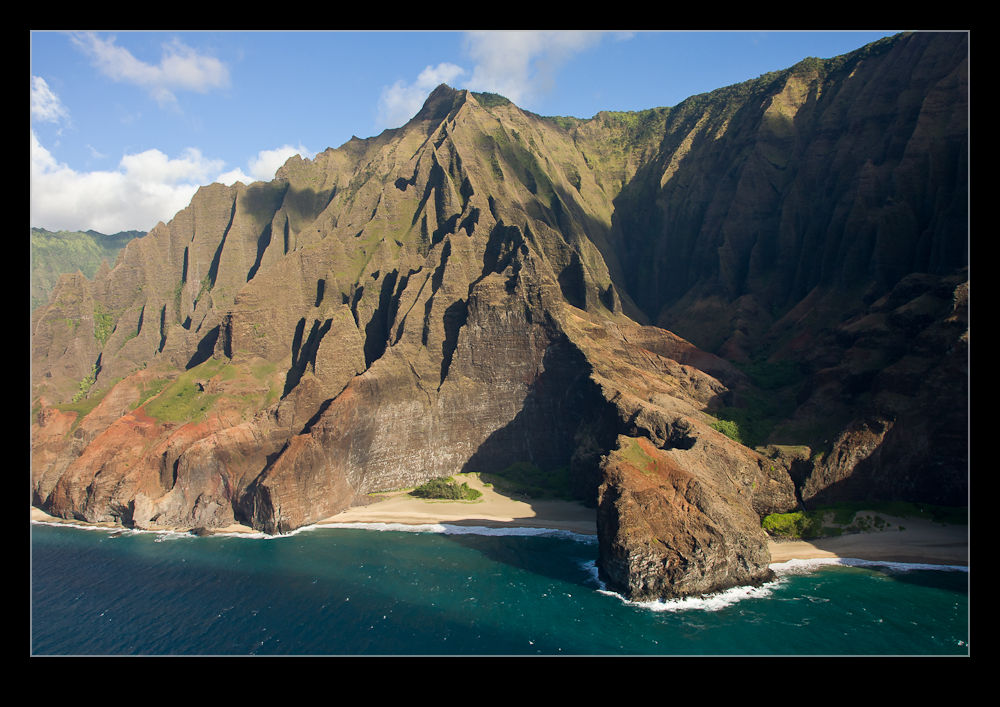 The tour covered the whole island but here I shall focus on the Na’Pali coast.  You can choose the time of day for making the trip and this coast was the primary reason for me choosing a later afternoon flight.  We had a 4:30 departure from Lihue and the flight lasted a little over an hour.  Sunset was about 6:30 so, by the time we reached the Na’Pali coast, we were well into the gorgeous light. 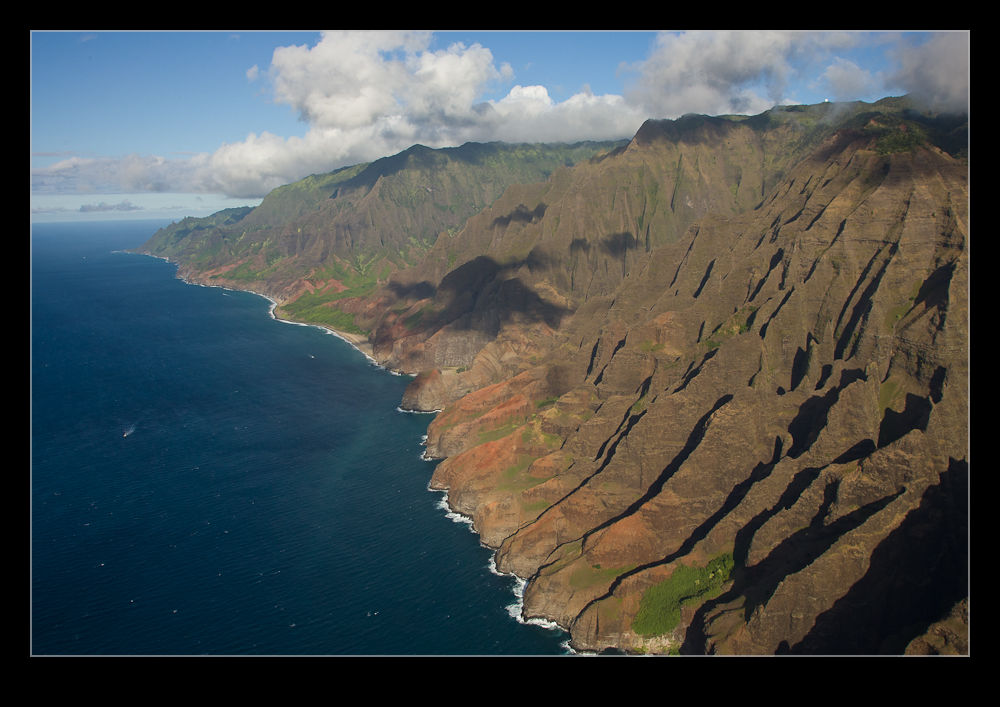 The time of day can be a bit of a lottery since clouds can build up later in the day.  Indeed, while we were further inland, there was a lot of cloud around that flattened out the light in some areas.  Once, we reached the coast, however, the sky was clear and the light was gorgeous.  To drop across the coast and see the beautiful scenery was a stunning experience.  While I was shooting a lot on this trip, I did make the effort every once in a while to put the camera down and just soak in the outstanding views. 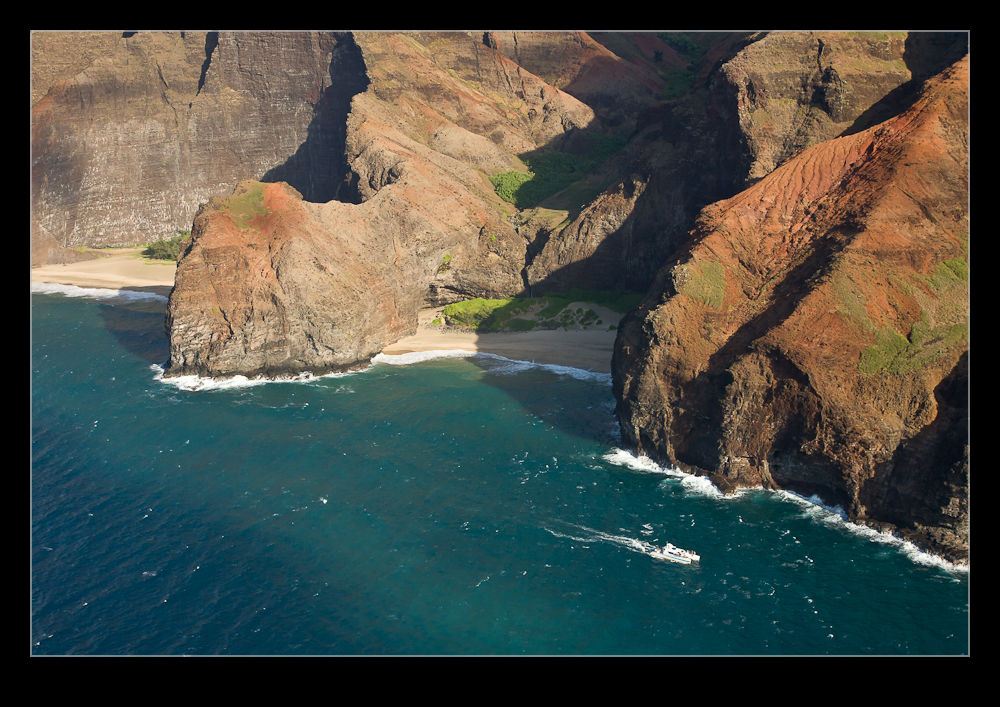 We ran along the coast and explored some of the deeper canyons and valleys that were on the coast.  We saw the rock formation known as the Cathedrals.  There were isolated beaches accessible only from the water and lots of cave along the rocky coastline.  We even saw one of the tour boats.  That was great because it reminded you of the scale of everything you were seeing. 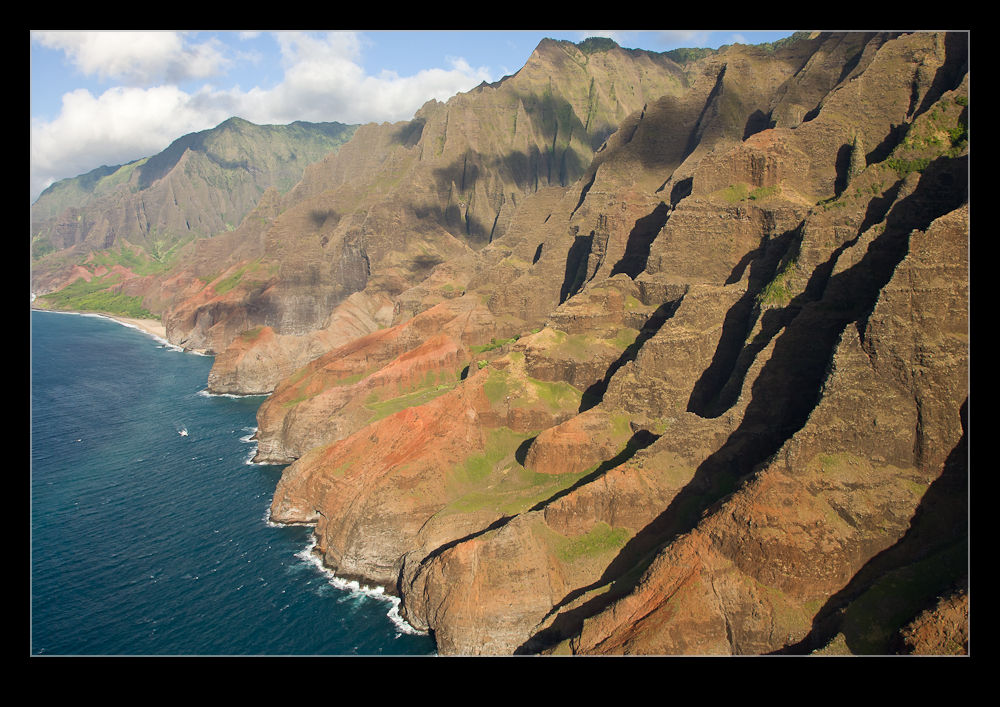 Kauai is a beautiful island and the Na’Pali coast is one of the most beautiful parts.  If you are there, I strongly recommend and aerial tour.  It may be expensive but, if you have made the effort to go that far, don’t miss out on this experience. 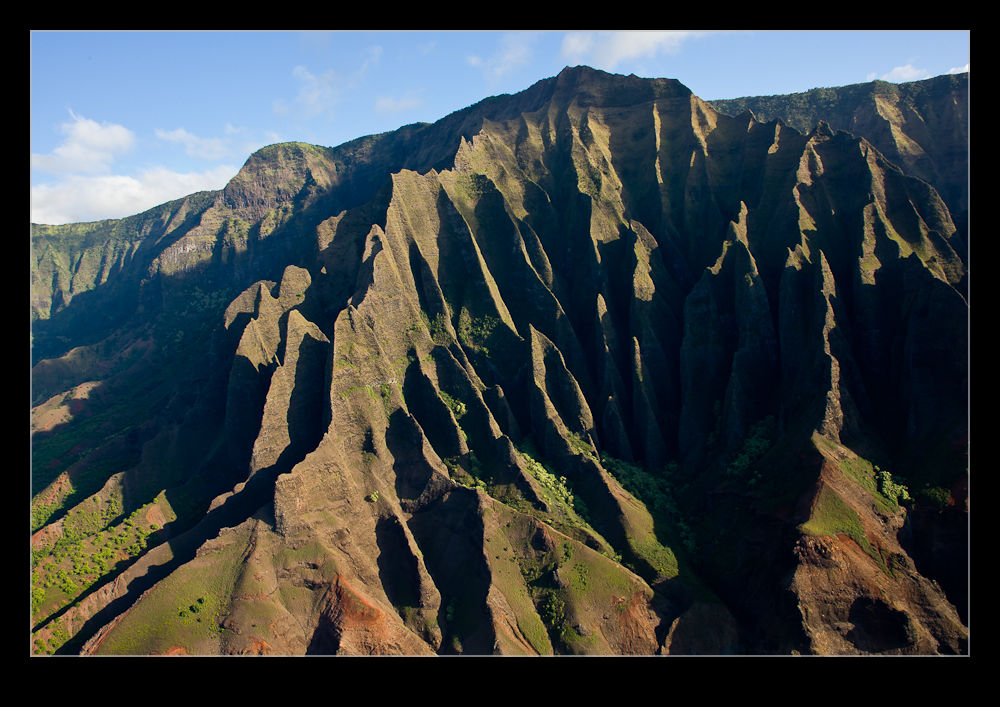