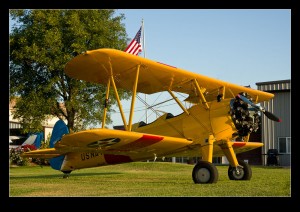 Back in the bus and it seemed to be running okay now – that is if you didn’t count the clunking that was coming from the suspension almost directly under my seat! Of course, there was still a question as to whether our driver knew where he was going. However, after a few wrong turns, we did arrive at our last destination of the day.

This was Gillespie Field and, more specifically, Bill Allen’s collection. Bill has developed a series of properties on the field that 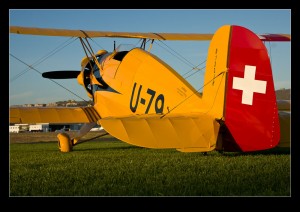 are combination homes and hangars. They are designed to have a really vintage look though and create a mini village at one end of the field.

Bill was an excellent host. Aside from making his place open to us and providing very welcome refreshments and food, he had some great aircraft on display including Stearmans and a Bucker Jungmeister. This was the day preceding the field’s airshow so a variety of interesting aircraft were arriving while we were there. 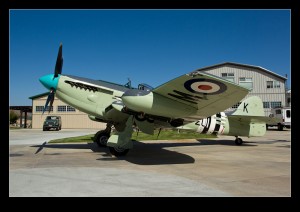 As I walked in, a familiar dace wandered up. Paul Dunn if Global Aviation Resource was there. Work had brought him to LA and he had taken the chance to come down and spend time with the subject of one of his articles, Captain Eddie, owner of an immaculate Fairey Firefly. Paul suggested I head around the corner to see it before too many people spotted it. Indeed it was a beautifully restored example and I grabbed a few shots. 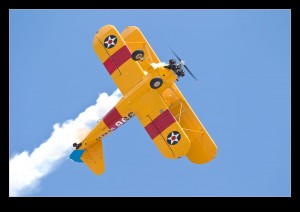 We all then retreated to the grass near the Jungmeister. As the evening drew in, the light was just getting better and better. There was no urgency to shoot so we relaxed on the grass, occasionally hopping up if something new appeared. A beautiful evening in great surroundings with friends was pretty idyllic.

As the light finally faded we had a couple 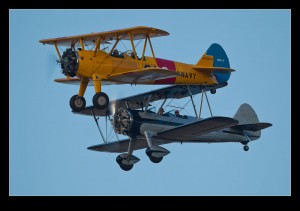 more treats. A pair if the Stearmans fired up for some dusk passes across the field. Meanwhile, another aircraft was staged for a lighting demonstration by Joe McNally. He put together the shot and built up a selection of flashes to light it, showing us the whole process as he went. Very interesting, even if I did feel a touch guilty running off occasionally when the Stearmans made another pass. 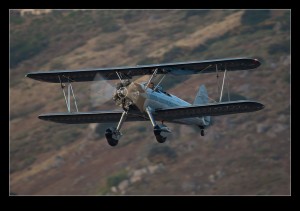 Finally it was dark and time to bid farewell to Bill and Gillespie and head back to the hotel. What a day!