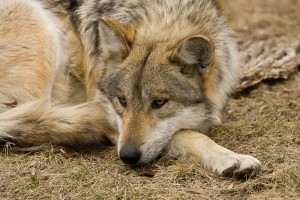 Brookfield Zoo is a regular haunt for us. It is a great zoo, constantly being improved and an obvious source of photo opportunities. Recently, they sent out an email telling us that the African Wild Dogs had a load of puppies that were now old enough to be on public show. (I wouldn’t be surprised if it wasn’t just their age but also that is was now warm enough for them to handle Chicago!)

We took a ride down to the zoo to see how the pups were looking. As with all animals at the zoo, when we got there to see them, they had decided that taking a nap was more 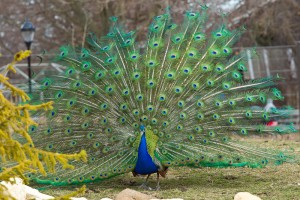 important. I always find that a zoo trip requires a fair bit of patience (which is why I am mystified that so many parents take tiny kids – they always seem to be bored while the parents look like they are obligated to take children to see the animals.)

We wandered around to see some of the other wildlife before heading back. The new bear exhibit at Brookfield is nicely done and well worth the visit so we spent some time watching the bears before heading back. A peacock wandered by in the meantime and suddenly decided to do his display. It was very dramatic, particularly if you are a peahen apparently, as a bunch of them came running over. Certainly and unexpected surprise and 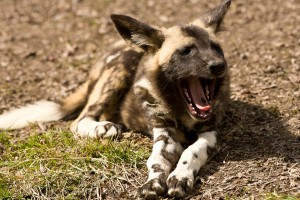 a very welcome one.

Back to the African Wild Dogs and a few of them were up and about. They were no longer a huge pile of sleeping pups. They weren’t bounding all over the place but they were a lot more active. It was certainly fun to see them and good to see them before they get too big. They are already half their full size so it won’t be long before you can’t tell them from their parents.

On the way out, it was impossible to avoid taking a peak at the lions. The lion was roaring loudly as we approached and was giving the lioness a fair amount of attention. I wondered 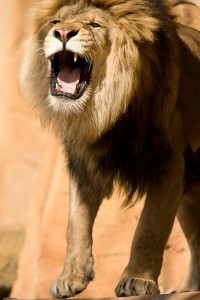 whether lots of children were about to have their eyes covered but the lioness obviously had other plans and moved off. I guess spring really is in the air. First the peacock and then the lion!