Our hotel in Door County Wisconsin had access to the beach across some marshy land. Resident in these marshes was a colony of frogs. You were in no doubt they lived there since most of the time they were trying hard to let you (or more likely every frog of the opposite sex) know that they were there. During the day this blended into the background a little but at night it was a steady sound that actually became quite soothing after a while. 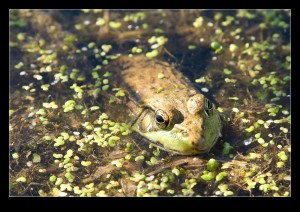 I decided to go and find some of these frogs. This is less straightforward since, while they advertise themselves constantly when you are a distance away, they get awfully shy as you approach. They switch off as soon as you get reasonably close and wait for you to go. Get a distance away again and they are back making whatever noise it is that a frog makes.

Spotting them as they lurk in the water is a little hard at first until you get used to what you are looking for. They head will be just proud of the surface of the water, probably surrounded by weed to he camouflage them. The regularity of the head shape is the giveaway. Once you get too close they disappear under the surface with a plop! 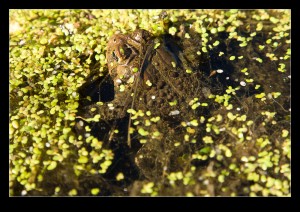 What I don’t know about frogs is whether they are very confident in their ability to get away or whether they are a bit dopey. If you approach slowly, you can actually get very close to them indeed. Maybe they are constantly assessing the threat I pose or maybe they don’t realize I am there until they have an “oh crap” moment and dive for safety. Anyway, whichever it is, I was able to get some good face to face time with a couple of them.

Thankfully not too many people were around or they might have been wondering why I was lying on a wooden walkway across a marsh!