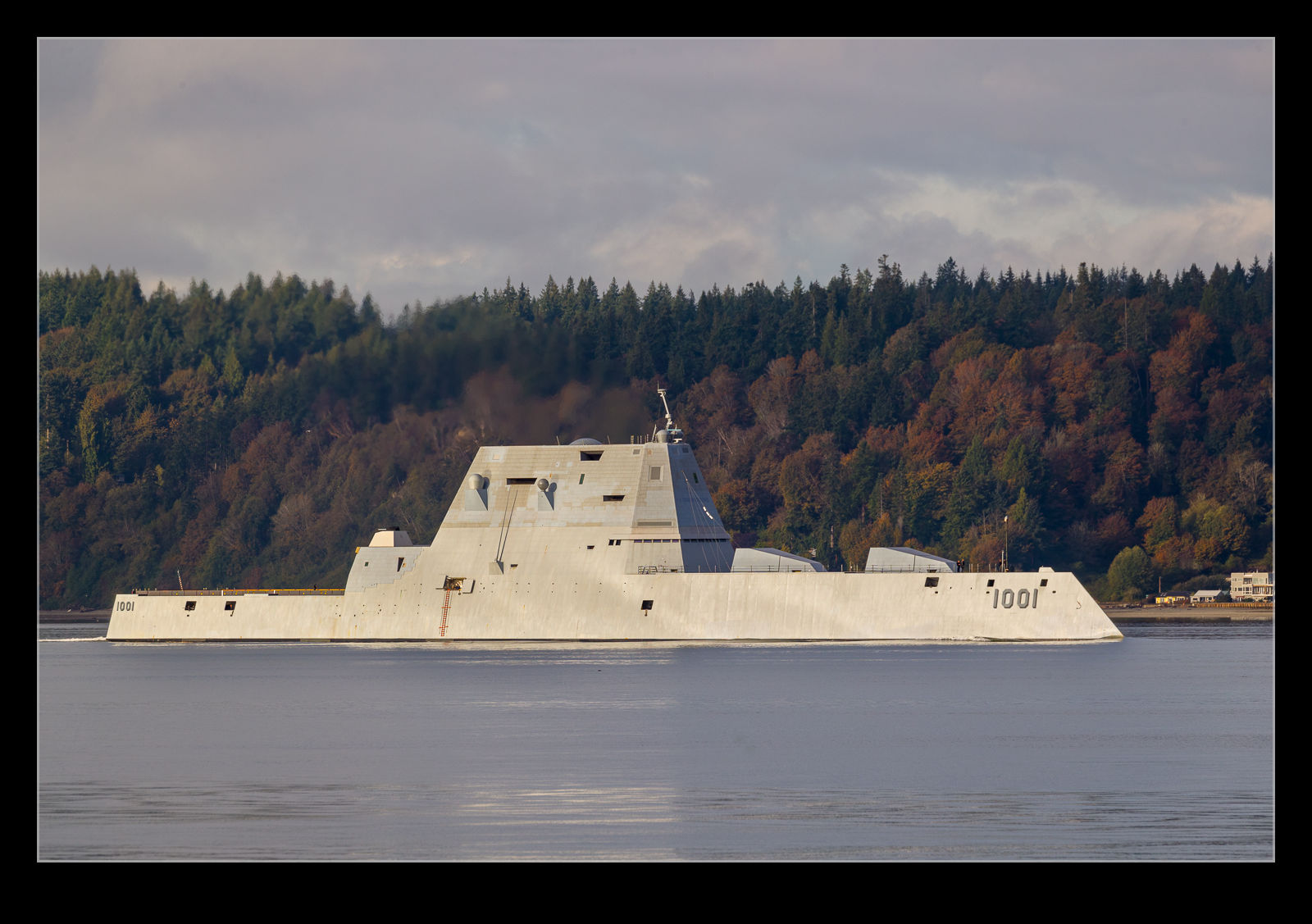 My friend Bob alerted me to an unusual warship visiting Everett’s naval base.  The USS Michael Monsoor is the second of the Zumwalt class of destroyer.  Only three of these ships are going to be built so it is an unusual thing to see.  They have a shape unlike almost any other ship with a stealthy profile.  I had seen pictures of them and figured I would try to catch it at some point.  I was hoping to see it shortly after Bob mentioned it but then saw it had already sailed for some local exercises. 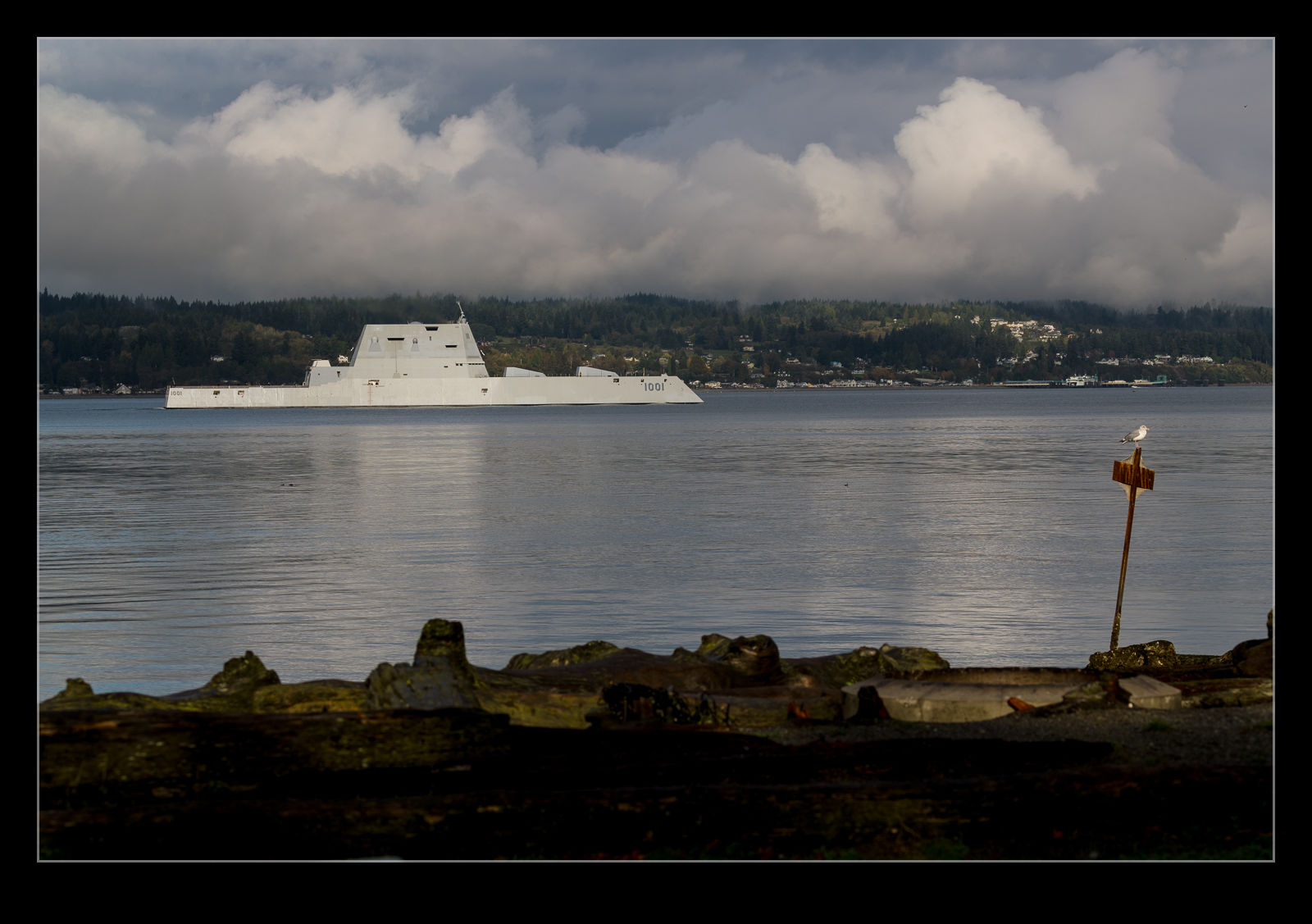 As with aircraft, there are ship tracking websites available so I waited to see if it was heading back.  It wasn’t coming in that day.  Nor the next or the one after that.  Instead it was going to and fro off port Angeles at a low speed. 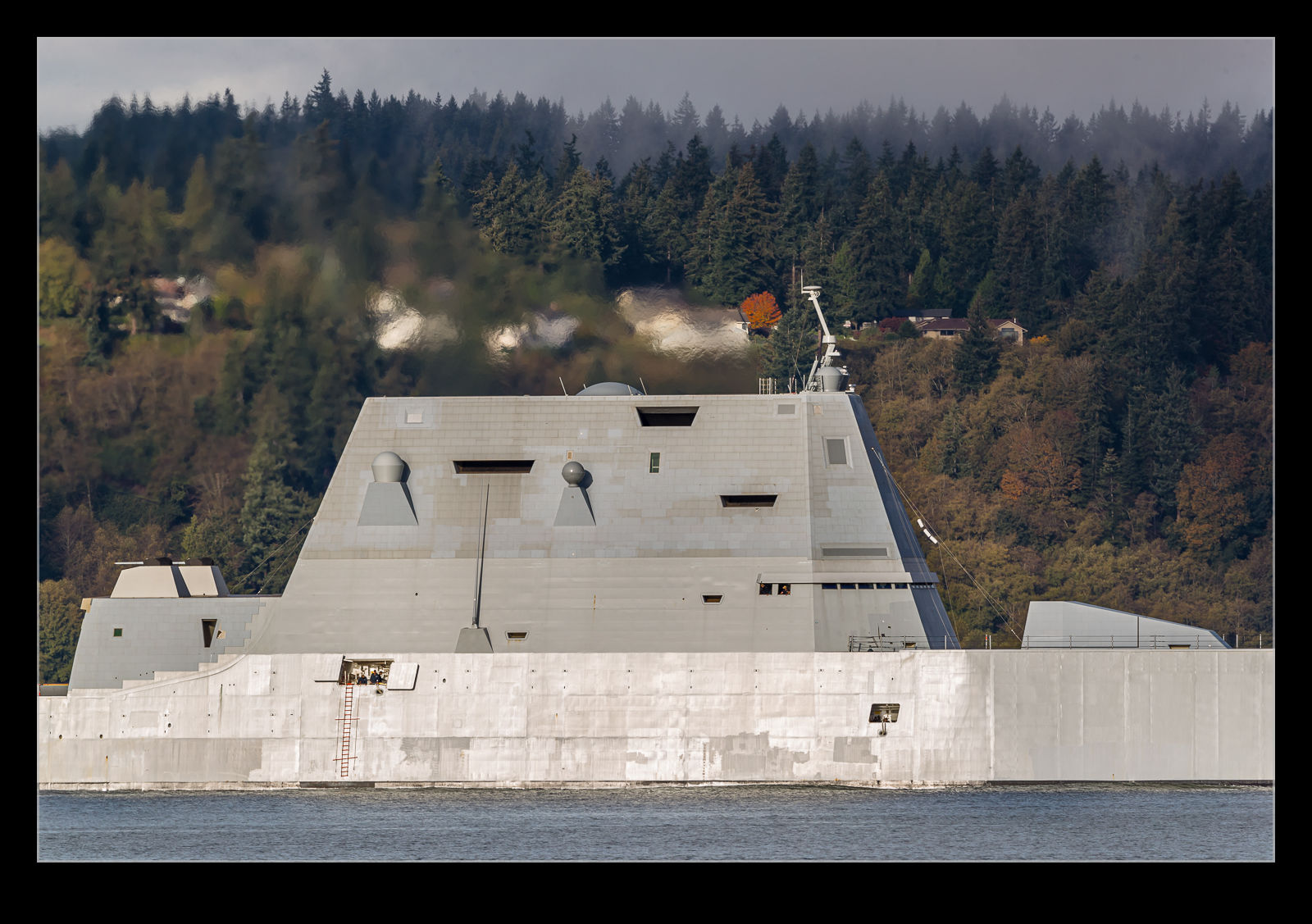 Then, as I got up one morning, I happened to check the tracker and I saw it was heading back.  The weather was pretty grim but was forecast to clear up a bit.  I grabbed my stuff and headed for Mukilteo.  They would come passed the point en route to Everett and it should provide the best opportunity to get a shot.  There followed quite a bit of trouble as they first appeared to not be coming my way and then made a 180 and did indeed come towards me.  I will spare the details of this.  Meanwhile, the sun had made an appearance. 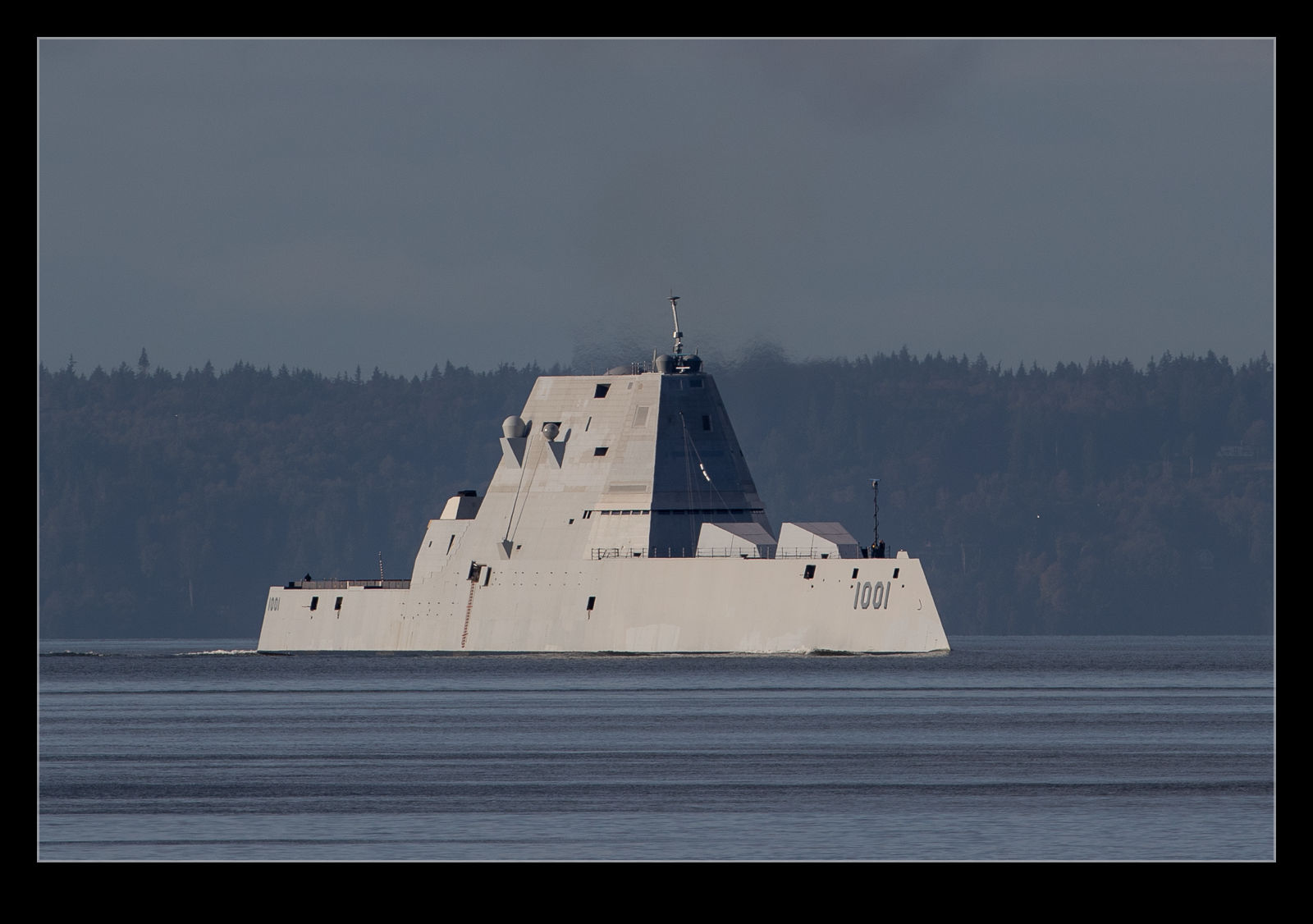 I initially spotted them a long way south.  The odd profile of the ship was conspicuous, even at a distance.  As it got closer, the unusual shape seemed strangely unreal.  Pictures do make it look strange but seeing it in person it is somehow stranger.  The sun was appearing and disappearing behind the clouds but I was able to get some nicely lit shots.  The details of the structure were interesting with the bridge seemingly buried in the structure, the guns on the upper rear decks looking like something out of a sci-fi movie and the side door open with the ladder lowered, presumably for the pilot. 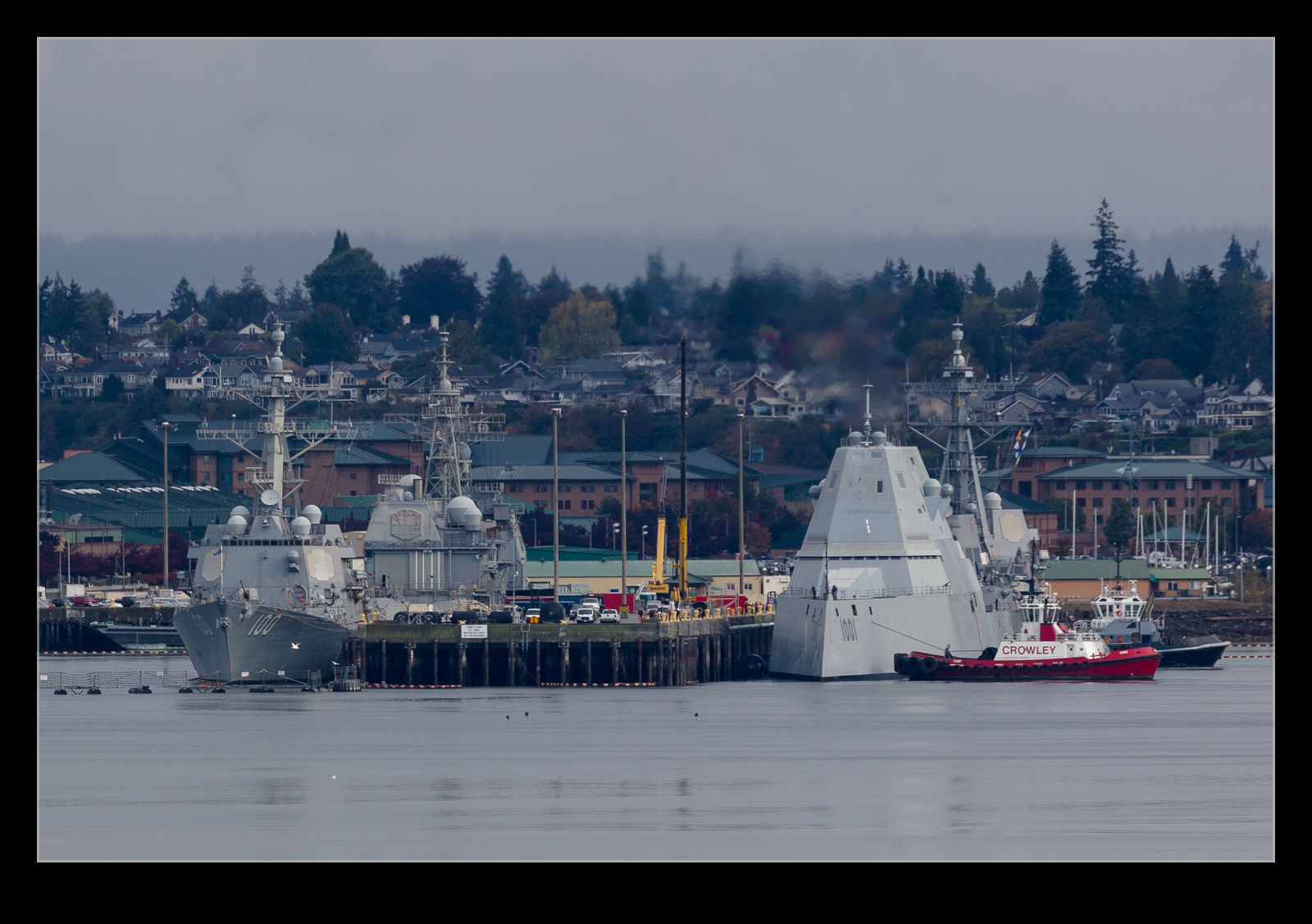 After it had gone, I was tied up on a call for a while but I did drive back along the shoreline towards Everett to get a look at it tied up alongside in the base.  Head on you get a clear idea of how different it is from the rest of the ships of the fleet. 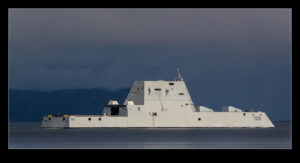 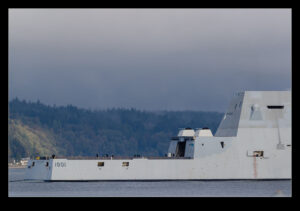 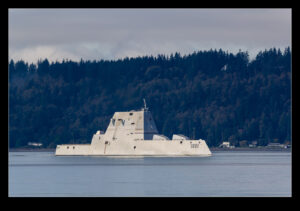 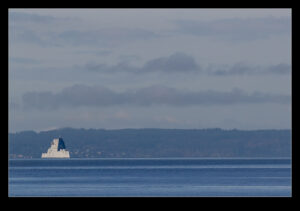 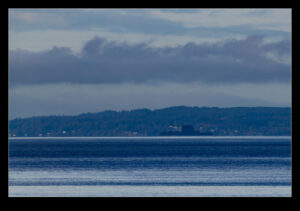 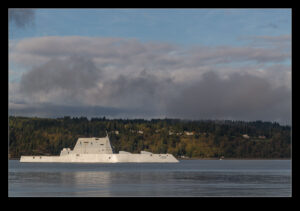