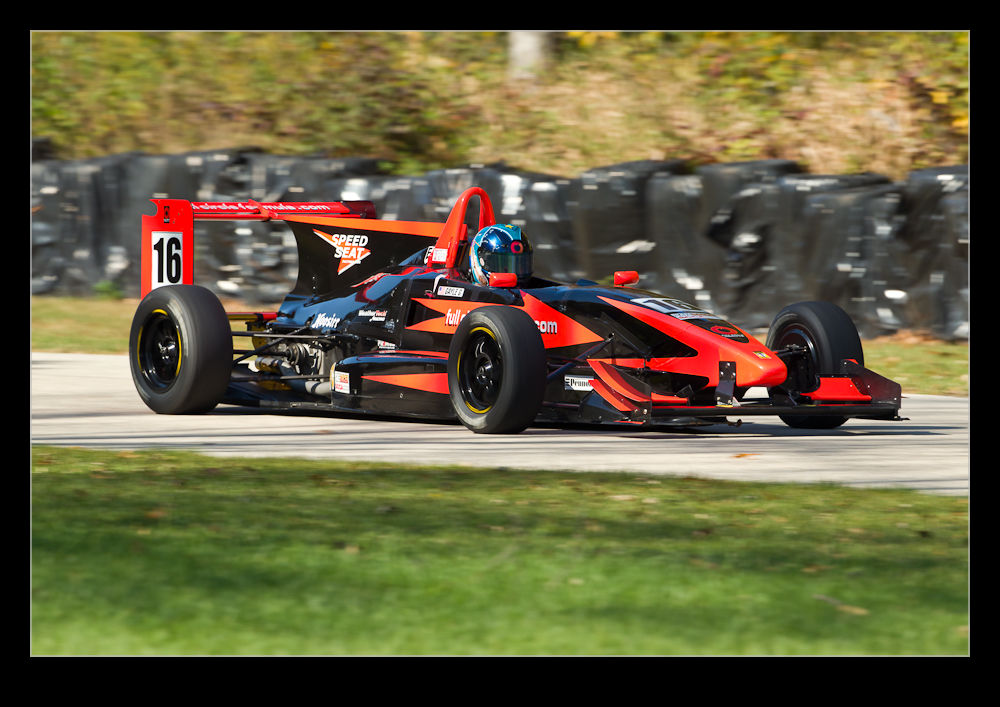 This little excursion is courtesy of my friend Joel Love of Speed and Sport Photography.  Joel called me up the other day to tell me that the SCCA regional fall run-offs were taking place.  The location was Blackhawk Farms Raceway in South Beloit IL, about and hour and a half from me (if the traffic is clear!).  He was heading up and wondered if I wanted to tag along. 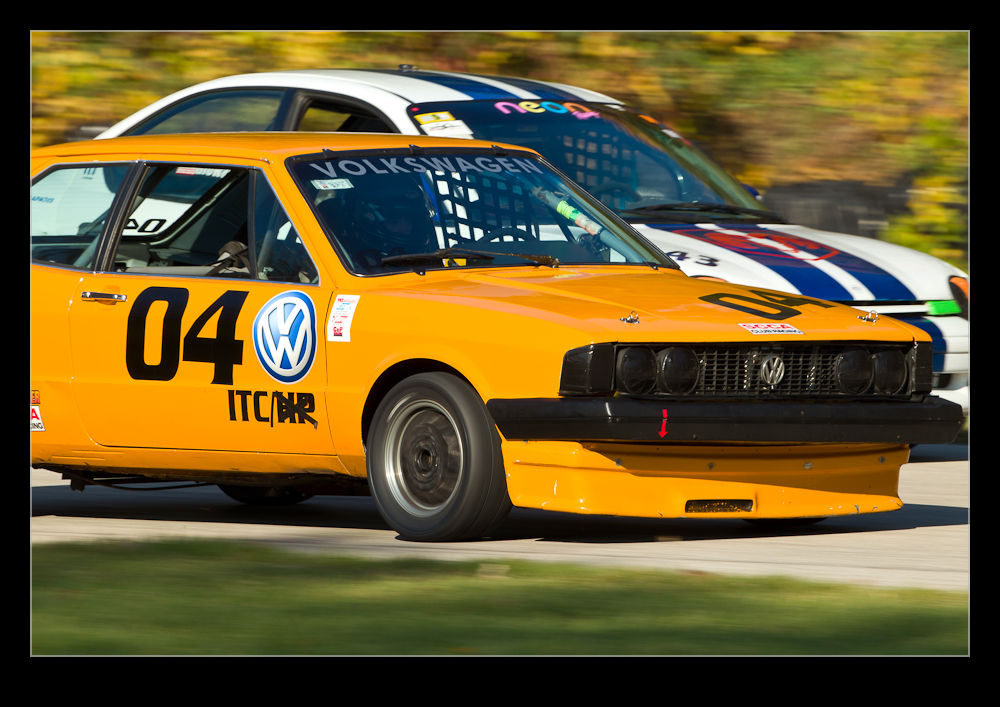 This came right in the middle of the great spell of weather that had settled over our part of the Midwest so the chance to see some racing at a photo friendly circuit with good light and fall foliage seemed like a good combination.  I decided this was a trip to make. 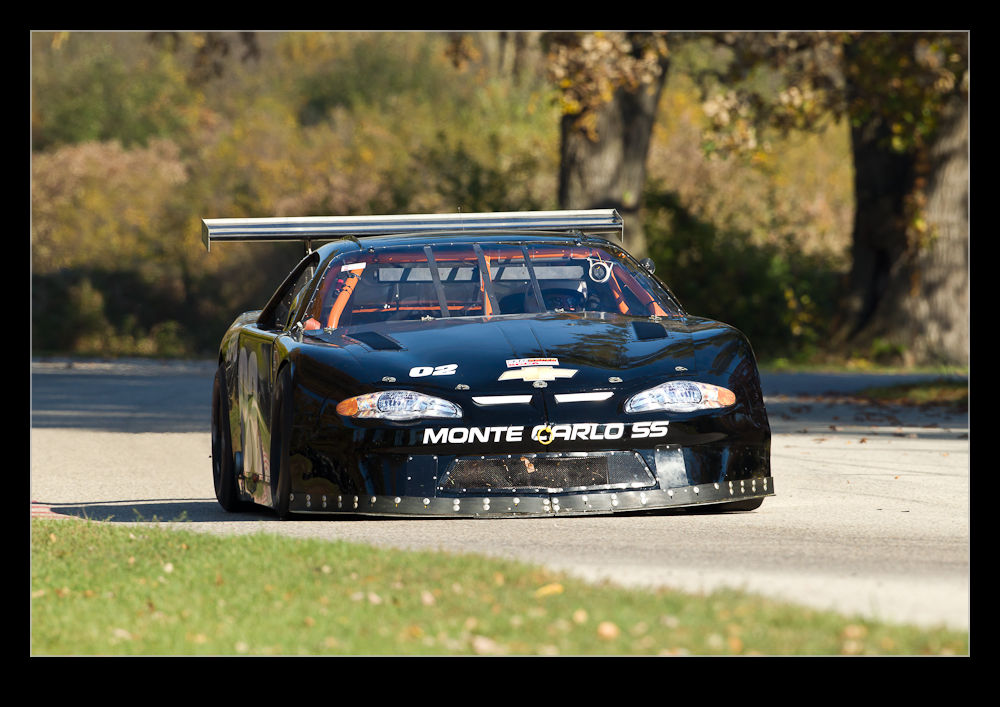 Blackhawk Farms is not a huge circuit.  This has a couple of advantages.  First, it doesn’t take long to get from one part of it to another.  Second, lap times are relatively low so you don’t have to wait too long for a car to come back around again after you have first seen it.  Add to that the great visibility from multiple locations (ideal throughout the day as the sun comes around) and you have all of the basics for a good day out. 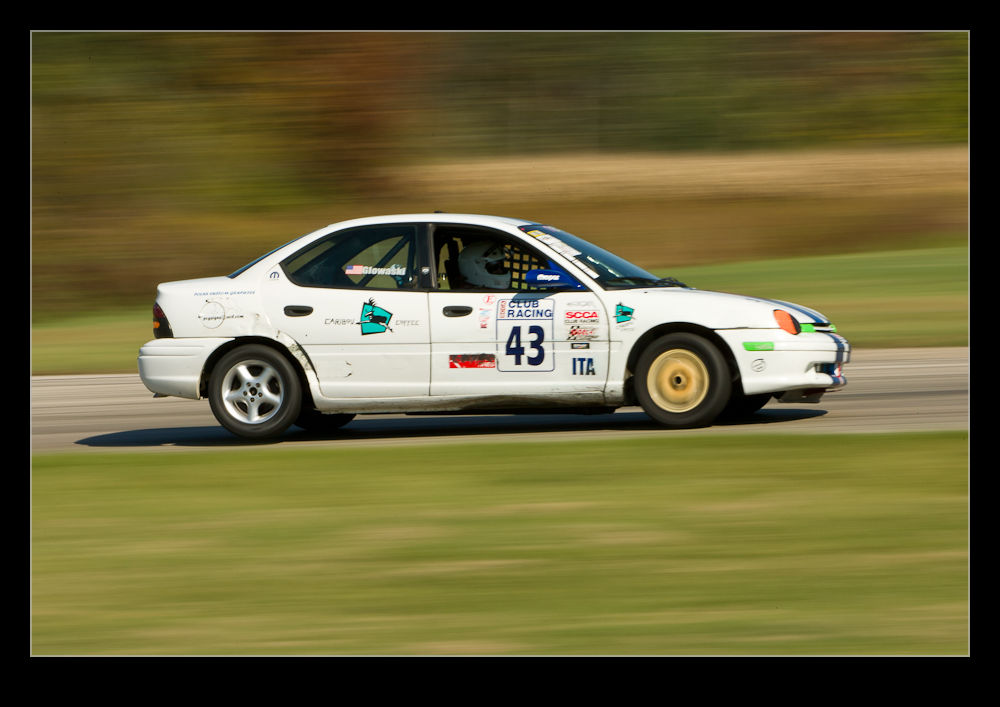 There were a variety of classes running throughout the day I went.  It was the day for practice and qualifying so there was less likely to be any frantic action – although a few people tried their hand at off-roading at various times!  Some cars ran in multiple classes so showed up several times. 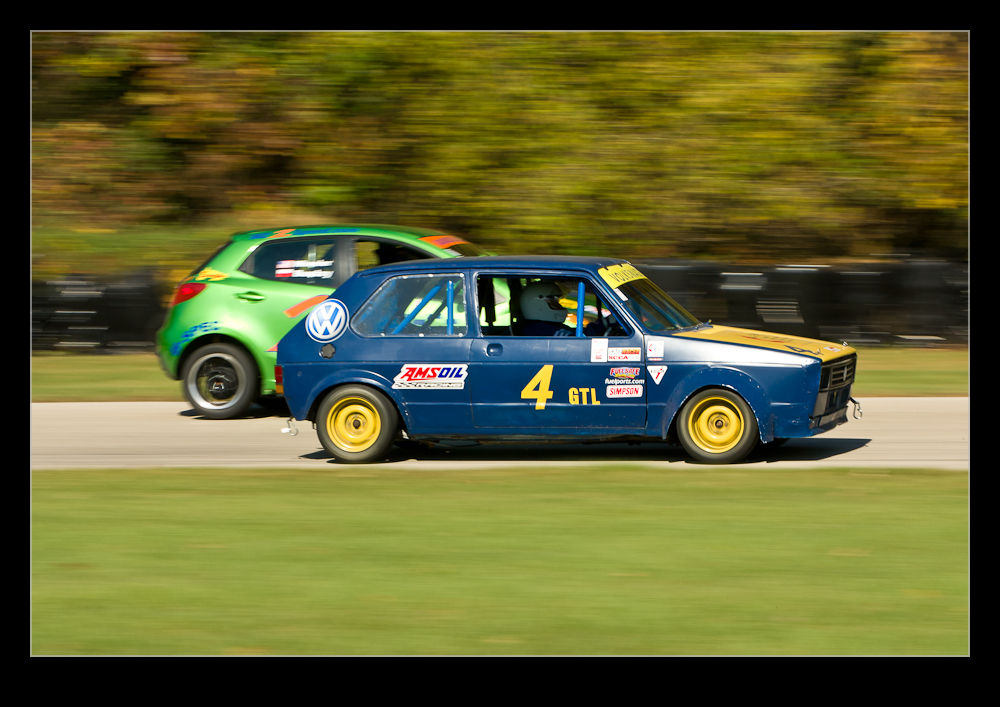 The types that made up the majority of the runners were modified road cars of which the vast majority were Mazda Miatas, single seaters like Formula Ford and the larger single seaters that have a more Le Mans styling to them – I’m sure someone who knows their motor racing will cringe at my categorization. 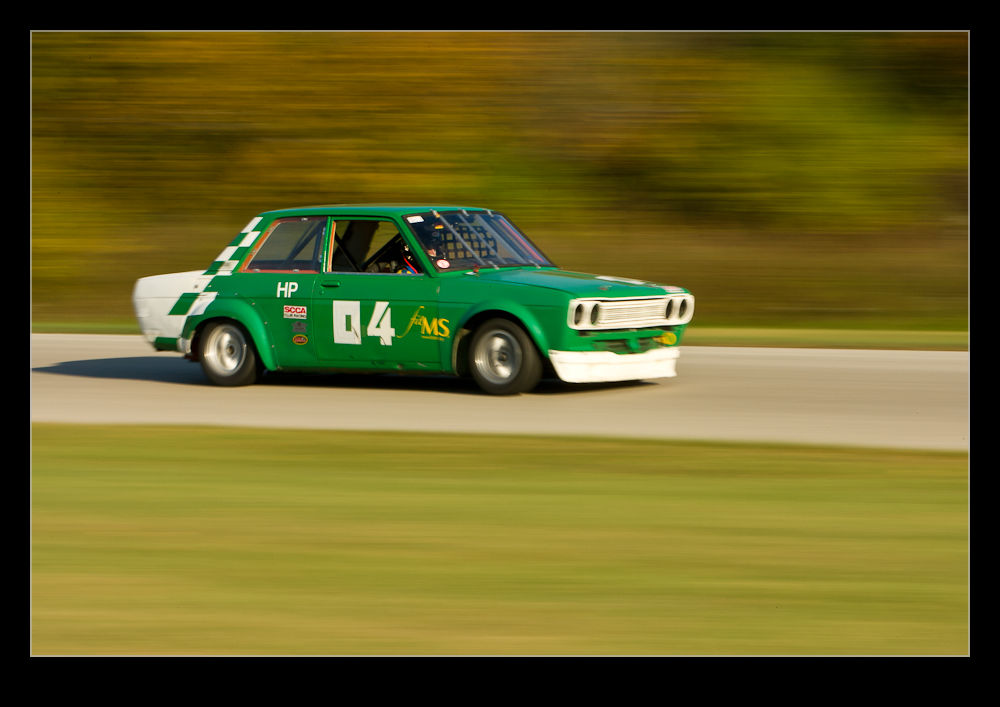 Since they could run in multiple classes and there was practice plus qualifying, there were multiple chances to shoot given cars which also meant that you could get them at different parts of the circuit without having to change location during each session.  This made for a relaxed day of shooting.  Also, you can take your car to each spot so no lugging camera gear around all day! 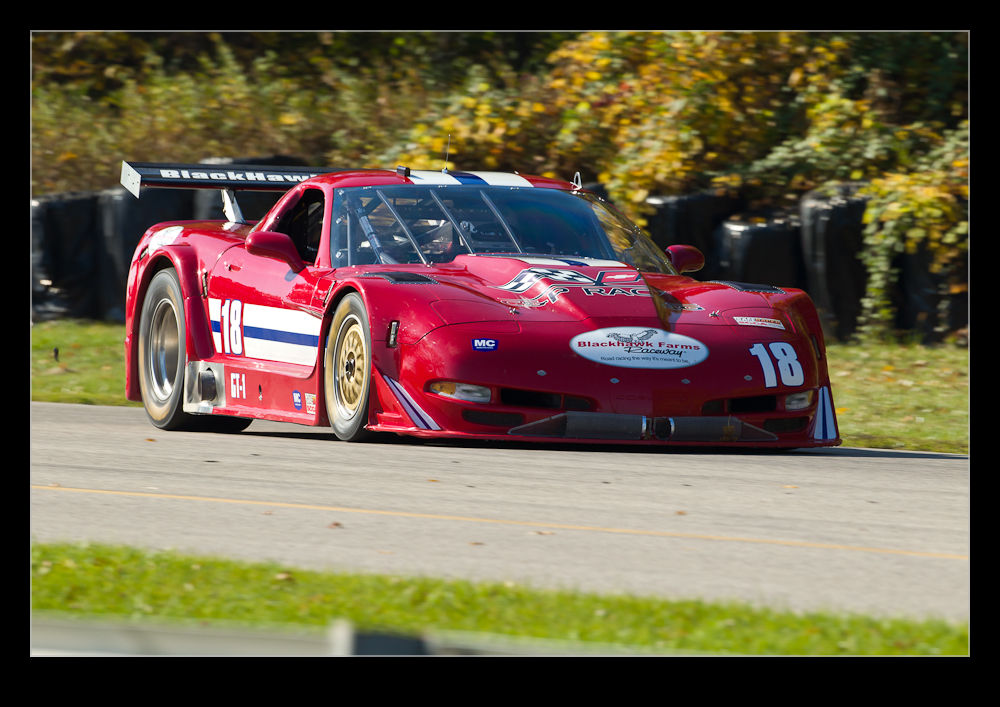 The multiple opportunities allowed for some experimenting.  I tried wide open shooting to try and get separation from the background.  That was a bust.  Given the distance from the cars and the background, the depth of field was still enough to see what was behind.  In the mean time, the shutter speed was very high so frozen wheels looked very unnatural. 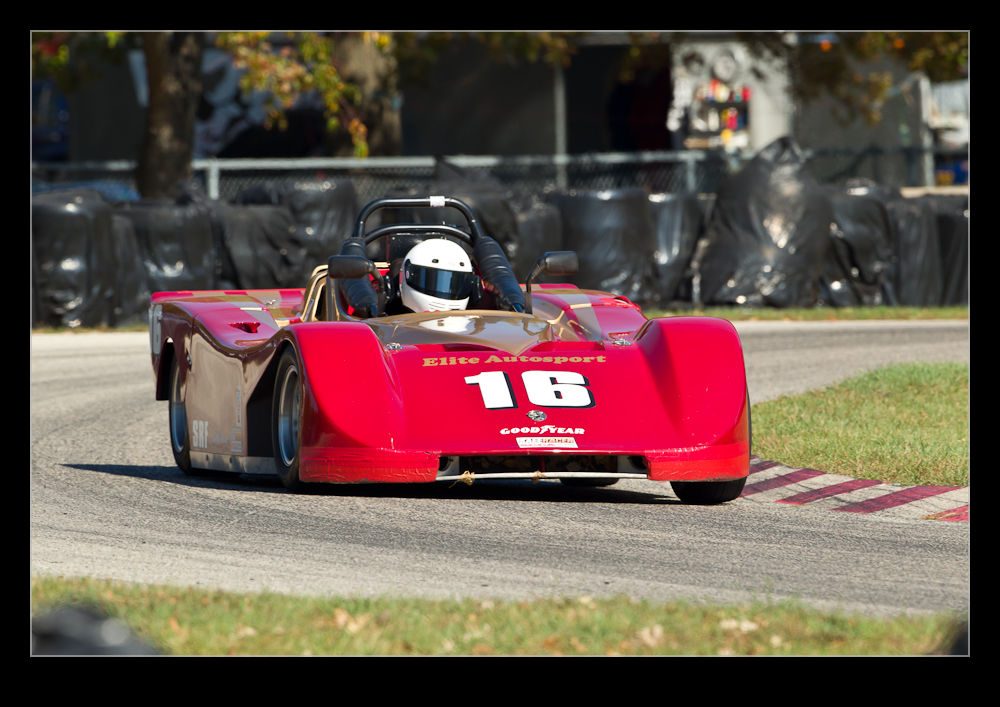 Slow shutter speeds were a lot more productive.  Getting some blur in the wheels made them look like they were actually moving.  Then it was a case of just how low could I go.  I tried all sorts of speeds throughout the day.  The results varied a lot.  Obviously, at the low speeds, the keeper rate fell dramatically.  However, you could get some great effects of speed.  The question then becomes one of taste.  We have become very focused on sharpness in imagery.  Some of the shots were not tack sharp but they gave a great feeling of motion.  Some while like that and others will not.  What do you think?  The small size of a shot on the monitor is, of course, not a great time to judge! 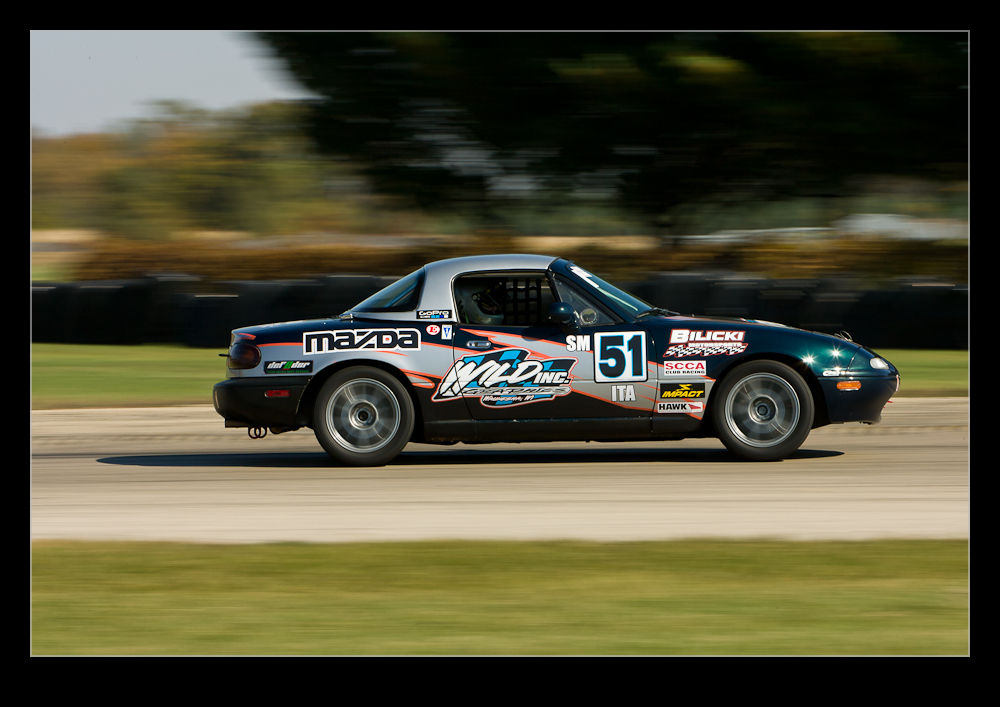 Lower speeds also limit your shooting angles.  When looking at the cars head on, you can get some nice shots as they turn in to a corner.  However, at lower speeds, the turn in can blur the car.  Head on is sharp but dull.  Turn in is more dynamic but blurred.  What to do?  Of course, you see less of the wheels so maybe a higher speed is acceptable in these cases. 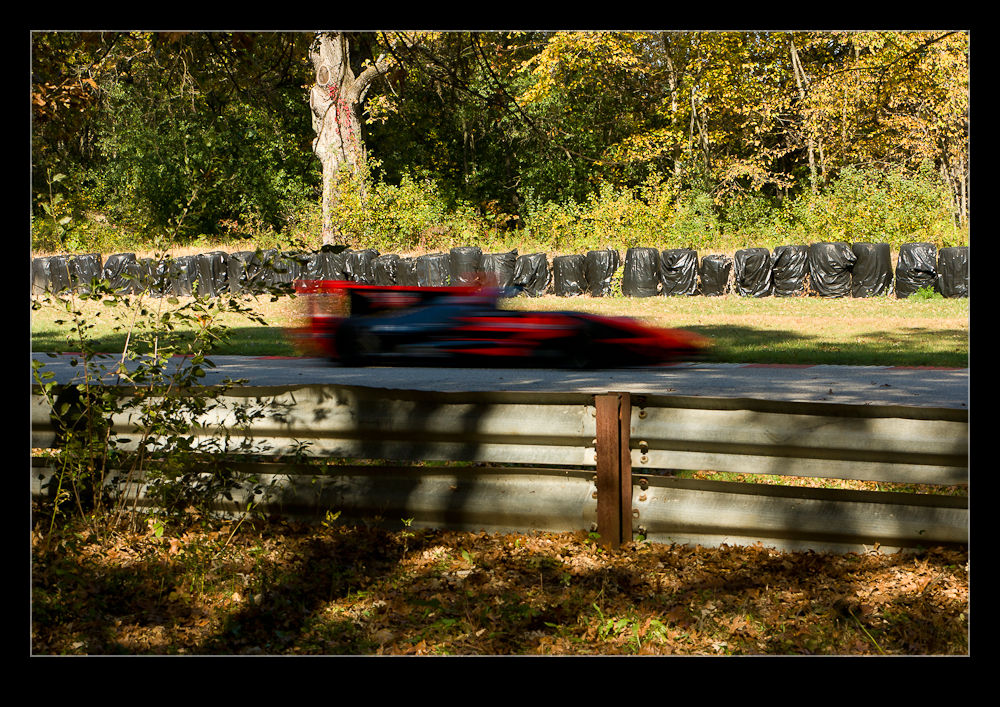 At the end of the day, do I like the shots?  On the whole yes.  I guess that is all that matters.  Thanks must go to Joel for letting me know about this and for providing great company during the day.  We shall have to do this again in the spring. 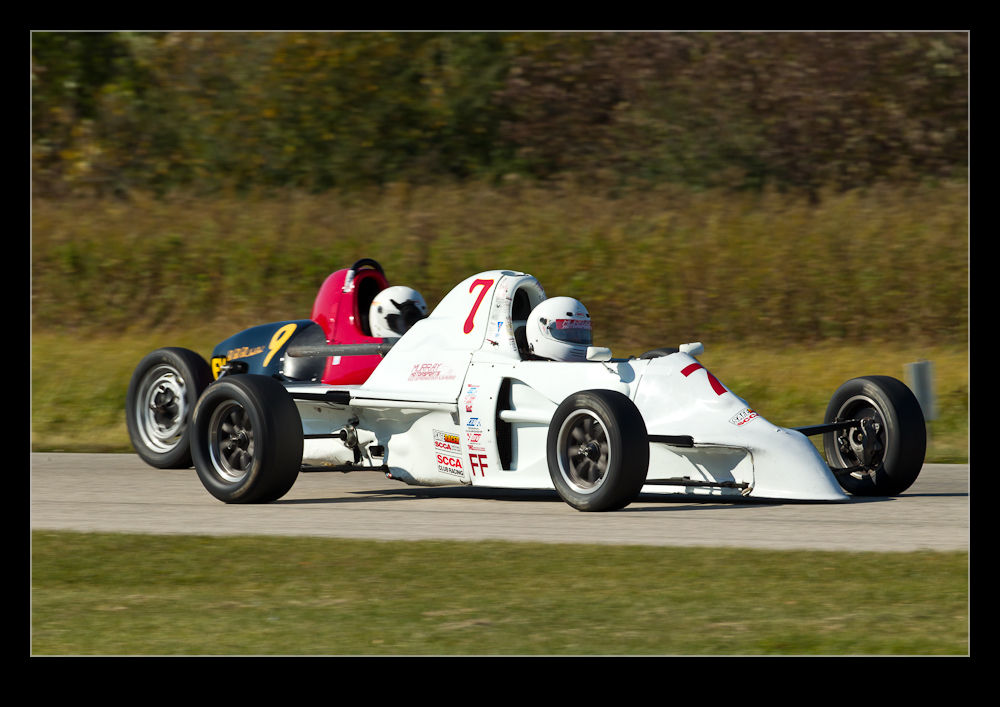