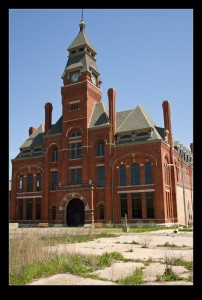 For the longest time I have been thinking about paying a visit to Pullman.  Pullman is a town on the south-side of Chicago that was created by the Pullman Palace Car Company, a railroad car builder at the end of the 19th Century.  Having read some history of Chicago, Pullman has an interesting position in the way things have developed.  It was an ideal town created to allow the workers to have everything they could need and probably a lot more than they would have had if they were working elsewhere in Chicago at the time.

Of course, the story is not all sweetness and light.  Having a controlled environment like that had other consequences and, when the economy tanked and the sale of railcars fell, the workers had their wages cut but miraculously the “market forces” did not result in the company owned housing rents following suit.  It all ended in a nasty strike which was ultimately broken by the federal government.  If you want the full history lesson, I guess I am not the one and there are better places to research. 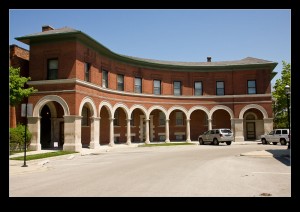 Anyway, we finally got around to taking a trip down to have a look around.  There is a visitors center where they gave us a walking tour guide.  While the factory was mostly destroyed by fire in recent years, the majority of the town is still there to see.  It is a great neighborhood to wander around and everyone we met on the street was very friendly.  A number of the properties are in the process of being restored by the owners.  Others are in worse shape.  However, the place has a really interesting feel to it. 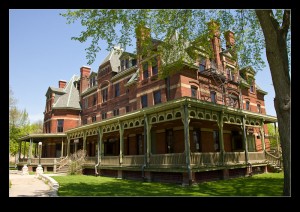 A sunny day always makes a wander around a new place more fun.  We were there in the middle of the day so not the best lighting for shooting but the trip wasn’t primarily for photography – just for exploration of a place we’d not been to before.  Therefore, the shots aren’t amongst my best but they are fine for the time-being.  It is always a good challenge to try and make something worthwhile out of some harsh light and shadows.