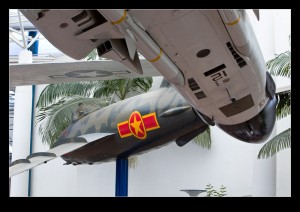 During the ISAP symposium, we had a field trip out.  The first stop on the trip was the San Diego Air and Space Museum.  Located in Balboa Park, this is one of my favorite parts of the city – even before including a museum with a bunch of aircraft.  I had been to the museum quite recently during a separate trip to San Diego.

We had an excellent breakfast laid on for us as soon as we got to the museum.  The journey from the hotel included a running commentary from our bus driver.  He obviously missed his true vocation (I’m just not sure what that should have been!) 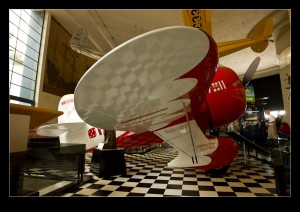 The museum is circular and has a nice courtyard in the center which is glazed.  With a selection of interesting aircraft, it is a very pleasant place to hang out.  I did just that for a bit of the time catching up with some old friends and making some new ones.  I also took a wandering around the museum.  It is a touch tricky to photograph without a tripod since it is rather dark so I chose my subjects carefully. 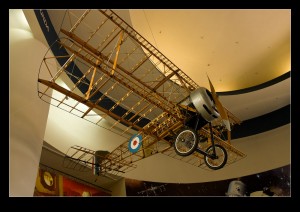 Also, the basement area where much of the restoration work is done was available to us.  This is normally off limits and provided an interesting place to explore.  The people involved in the restoration were on hand and happy to chat.

Not a bad start to the day!  More to come from the rest of the day…