A long time ago, I became intrigued by the idea of having location tag information appended to my images. It wasn’t something that I considered to be vital but it did seem to be potentially useful. However, as I am a Canon shooter, I quickly discovered that this was not going to be something that I could easily achieve. There were a number of GPS devices that you could attach to the hot shoe of a camera and plug in to the USB port but they worked on Nikons while the Canons did not interface with them.

I was a touch disappointed but not so much that it changed my life. I gave up on geotagging for a while until Lightroom 4 came along. It has a useful map module that allows you to see where images were taken if they have coordinates associated with them and so search for shots in a given area. More importantly for me, it allowed you to drag and drop images onto the map to embed the data if they didn’t originally have it. This became part of my workflow.

It did get me more interested in the idea of having real time data with the images rather than trying to decide which shots were taken where. The easiest option appeared to be getting a GPS tracking app for my phone to try. I took a look at the apps available. There are many of them, most of which seemed to be focused on keeping track of members of your family! All rather creepy. All I wanted was something that would keep a track of my location without draining the battery too much.

I settled on an app called GPX Master. It seemed to do what I wanted and had some good reviews. There is a free version with ads embedded or a paid version without ads. Since I was planning on it running in the background, having ads I would rarely see seemed useful. Moreover, it would automatically sync any track files I create with my Dropbox account. I have now taken it out for its first run. The results are very positive.

I was out shooting in a location but I did move a few times. When I got home, I imported my images to Lightroom and turned to the map module. I had checked that the clocks on the cameras were accurate since the time code of the GPS is what makes the process work. The GPX format file was already on my computer courtesy of Dropbox so I was ready to go. At the bottom of the screen was the drop down to select the track file. This I did and a blue track was immediately overlaid on the map showing where I had been. I then went to the map options drop down at the top of the page and it offered to automatically tag all files based on this track. Bingo! It was done. 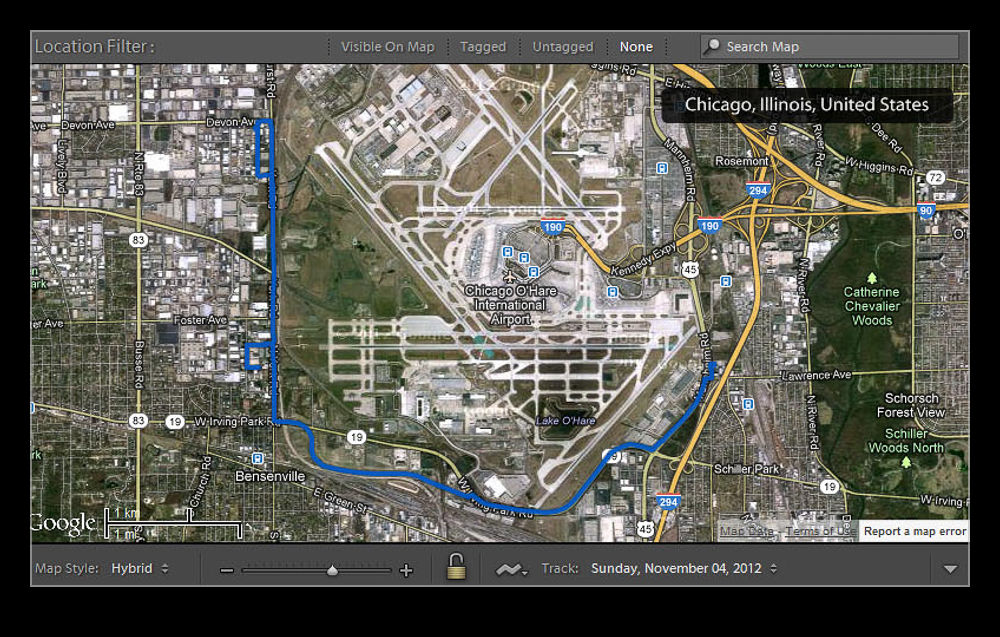 It was so very easy. The images were grouped by their location. I zoomed in and saw that each location was actually a series of locations as I wandered around in each place. Very cool. I don’t know whether the tracks are absolutely accurate. They look pretty good to me. However, it is a lot more accurate than me guessing after the event. I am really impressed. The battery on the phone did not take much of a hit either so it looks like a promising approach. Now to remember to switch n the track whenever I am out shooting. I wonder how well I will do with that?