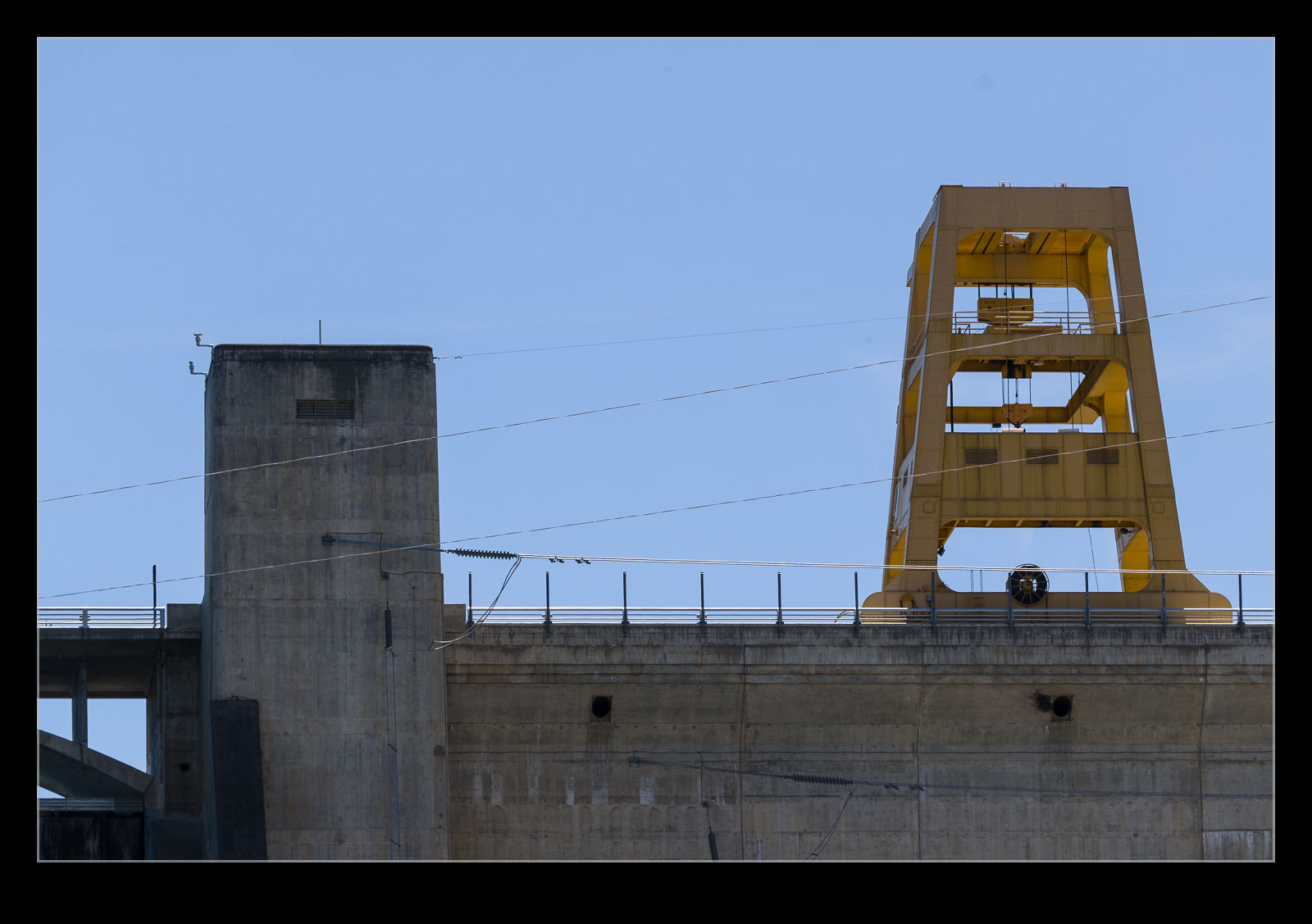 There are a number of cranes that operate around the dam structure at Grand Coulee.  With the scale of the dam being so large, it is hard to appreciate how big these cranes are.  However, the road crosses the edge of the dam at the top and you go across rails in the road surface along which the cranes can traverse.  This gives you some idea of just how large it really is.  It would have been good to see one in action to give some idea of what it was lifting but that was not to be.  Below is a wider view of the dam so you can see how small the crane looks in the grand scheme of things – disguising its true size. 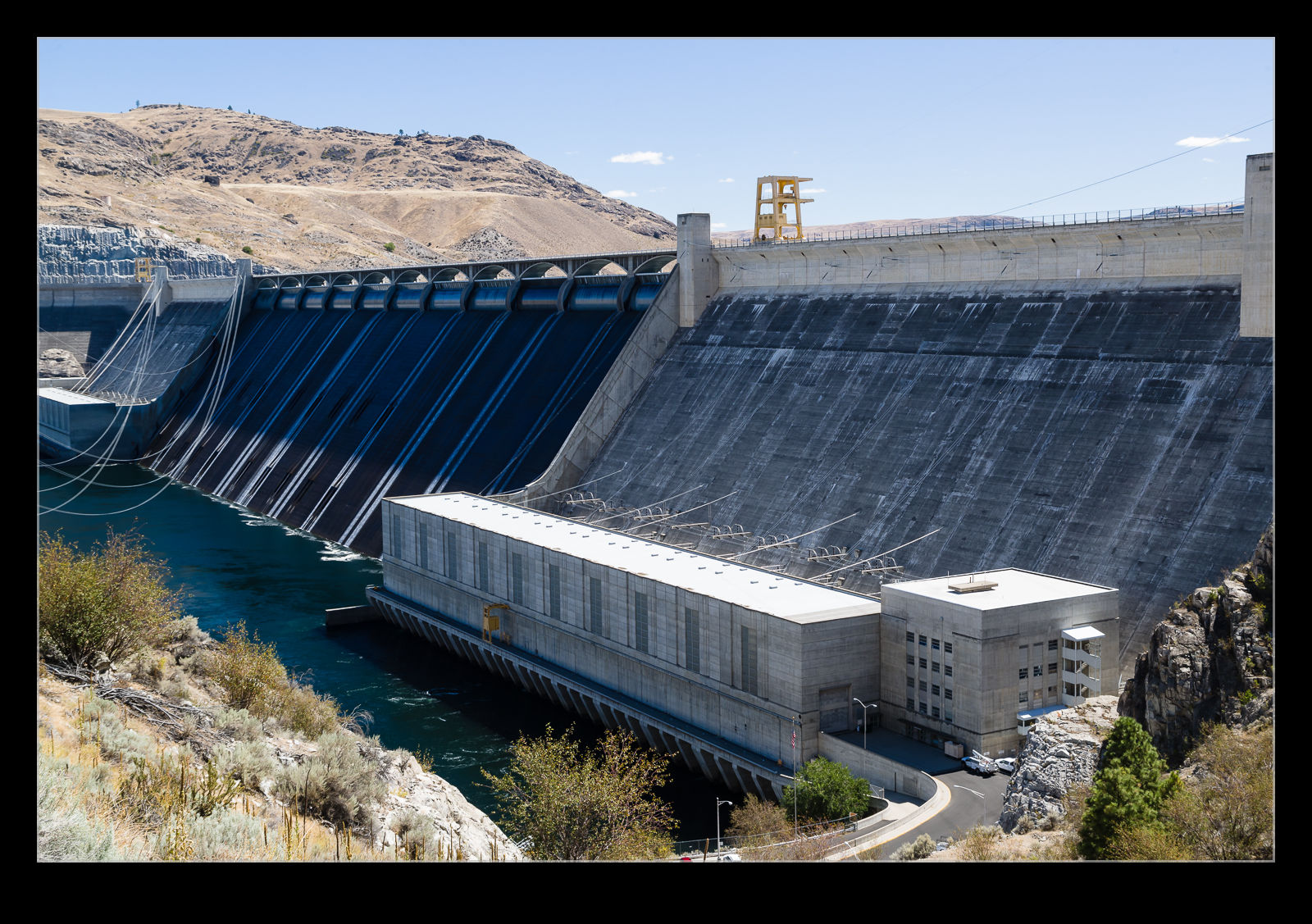 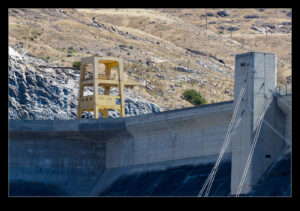 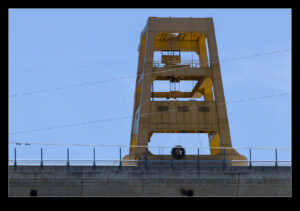 The Grand Coulee Dam was one of my planned stops on my trip.  I had been interested to see it for a while having read a little about its history.  It is a bit of a trek from home so a specific trip was not something I had planned but, since I was going to be only an hour away, I seemed like the perfect time to visit.  I drove across from Brewster and the route brought me in over the hills overlooking the town and the dam.  Crown Point park is situated up on the hills so I made that my first stop. 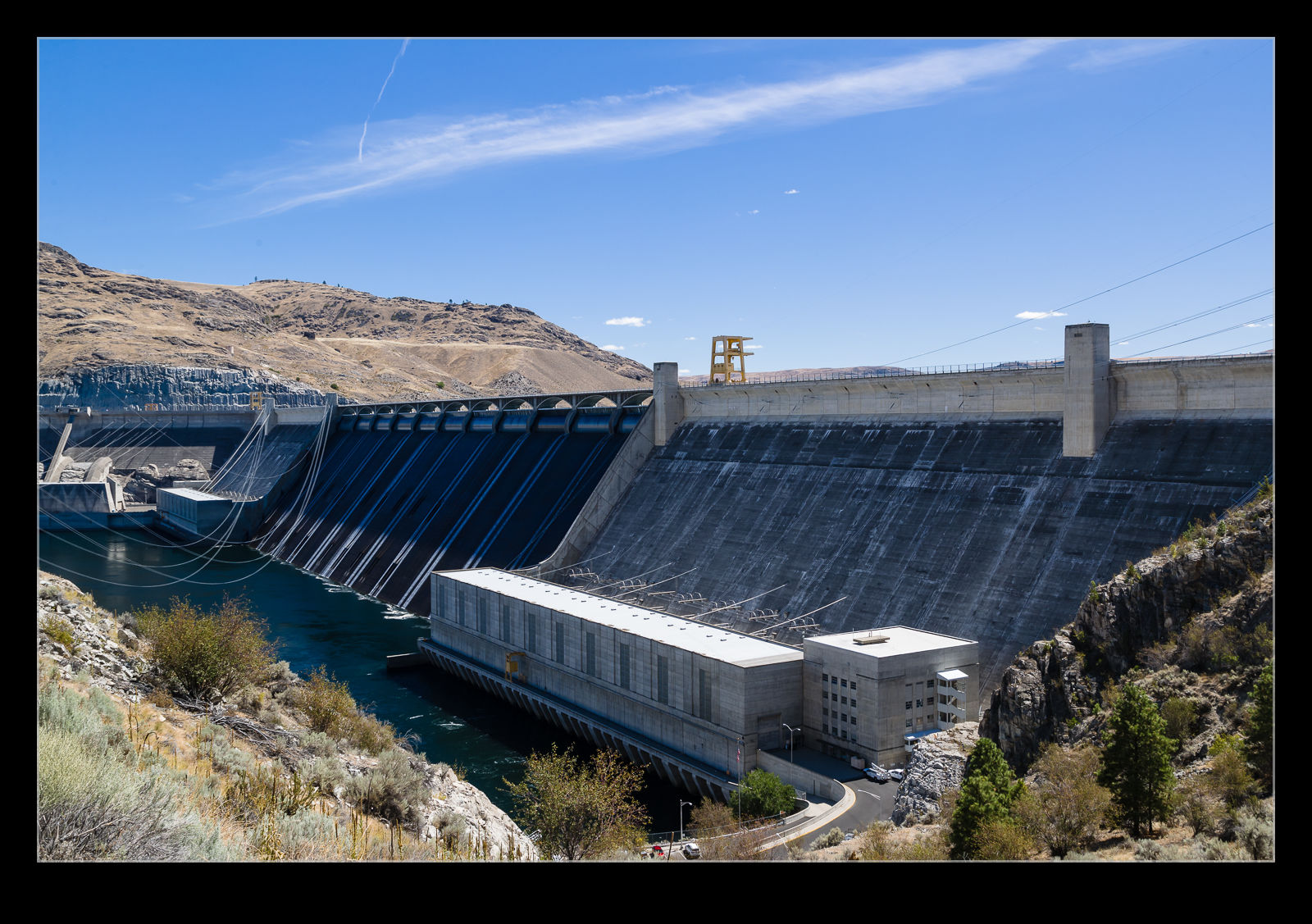 The dam is enormous.  The problem with structures that large is that it is hard to appreciate their scale.  You tend to see them from a distance so you can’t judge them very well.  Even so, from up on the hills, you weren’t left in any doubt that this is a big structure.  I was the only one up in the park aside from a guy looking to go off-roading but, since it was a Friday in Grand Coulee during a pandemic, maybe that isn’t such a shock. 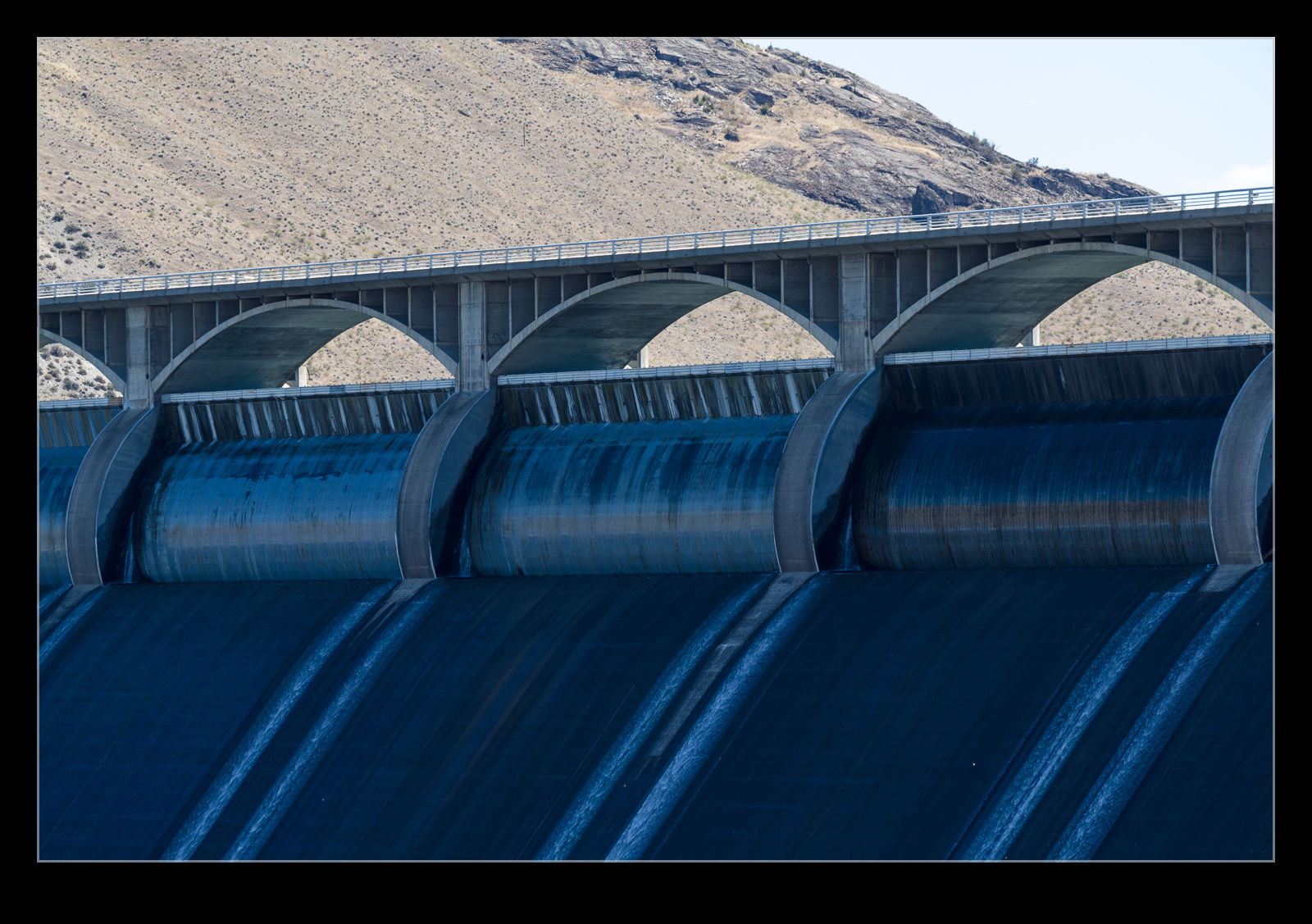 Dropping down in to the dam takes you on a road that crosses the edge of the structure itself.  From the road you get a view across the top of one section of the dam.  Then you drop down the hill to the visitors center.  A nice park area sits below the dam and this was the spot I chose for my lunch break.  Looking up at the two sections of the dam, you really couldn’t get the scale.  I felt like Father Ted needed to explain to Dougal about scale (reference for a few people there I’m afraid). 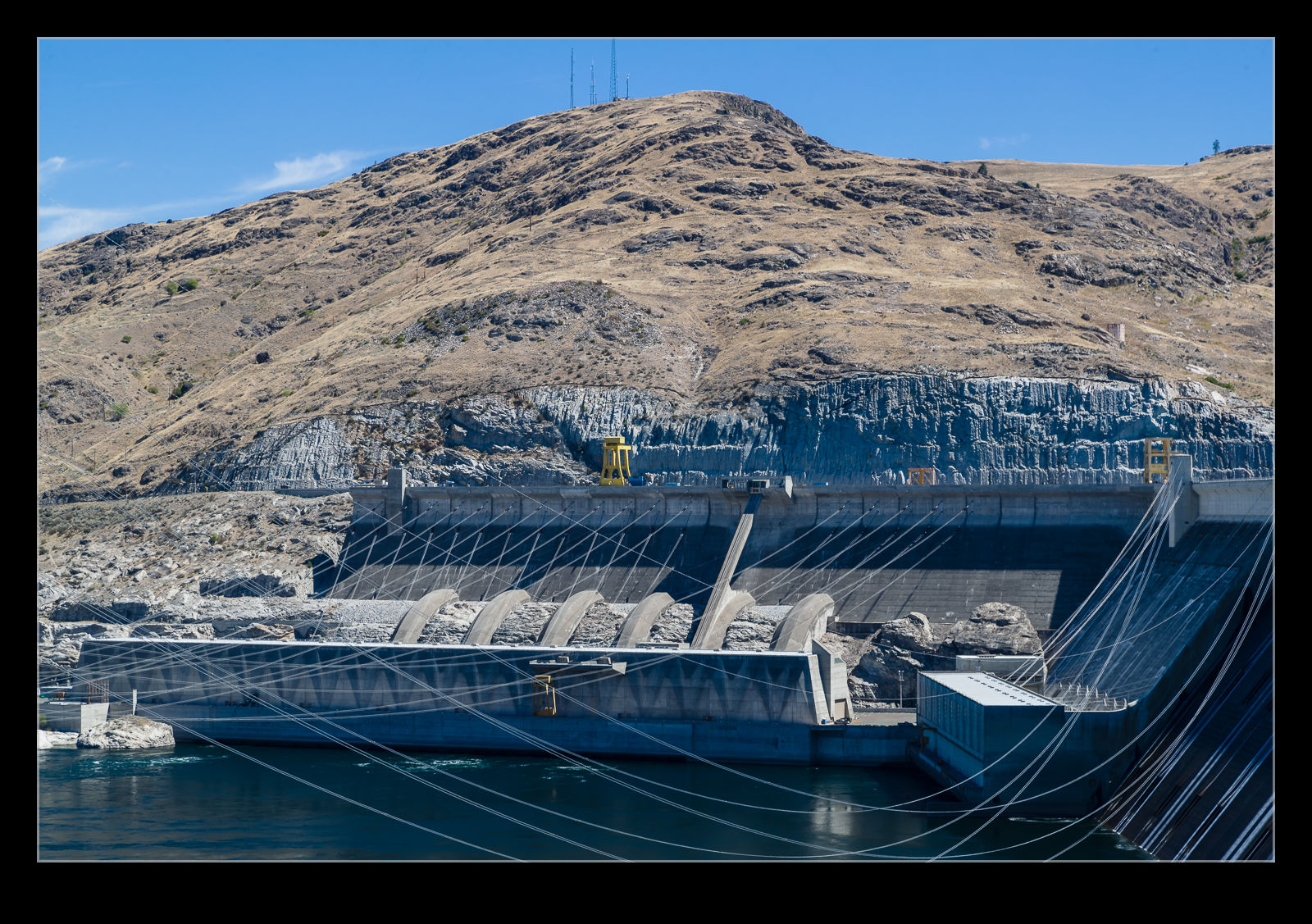 I had seen some images of tour buses (when tours were being run) on top of the arches at the top of the dam.  The buses looked small compared to these arches and, from where I was observing, the arches looked tiny.  That was the only way I could get some comprehension of the size of things.  There was a little water running down the face of the dam but there wasn’t much overflowing at this time of year so no great falls of water to watch.  I guess the majority of the water was going through the power generation side of things.  The dam is the largest capacity generator in the US! 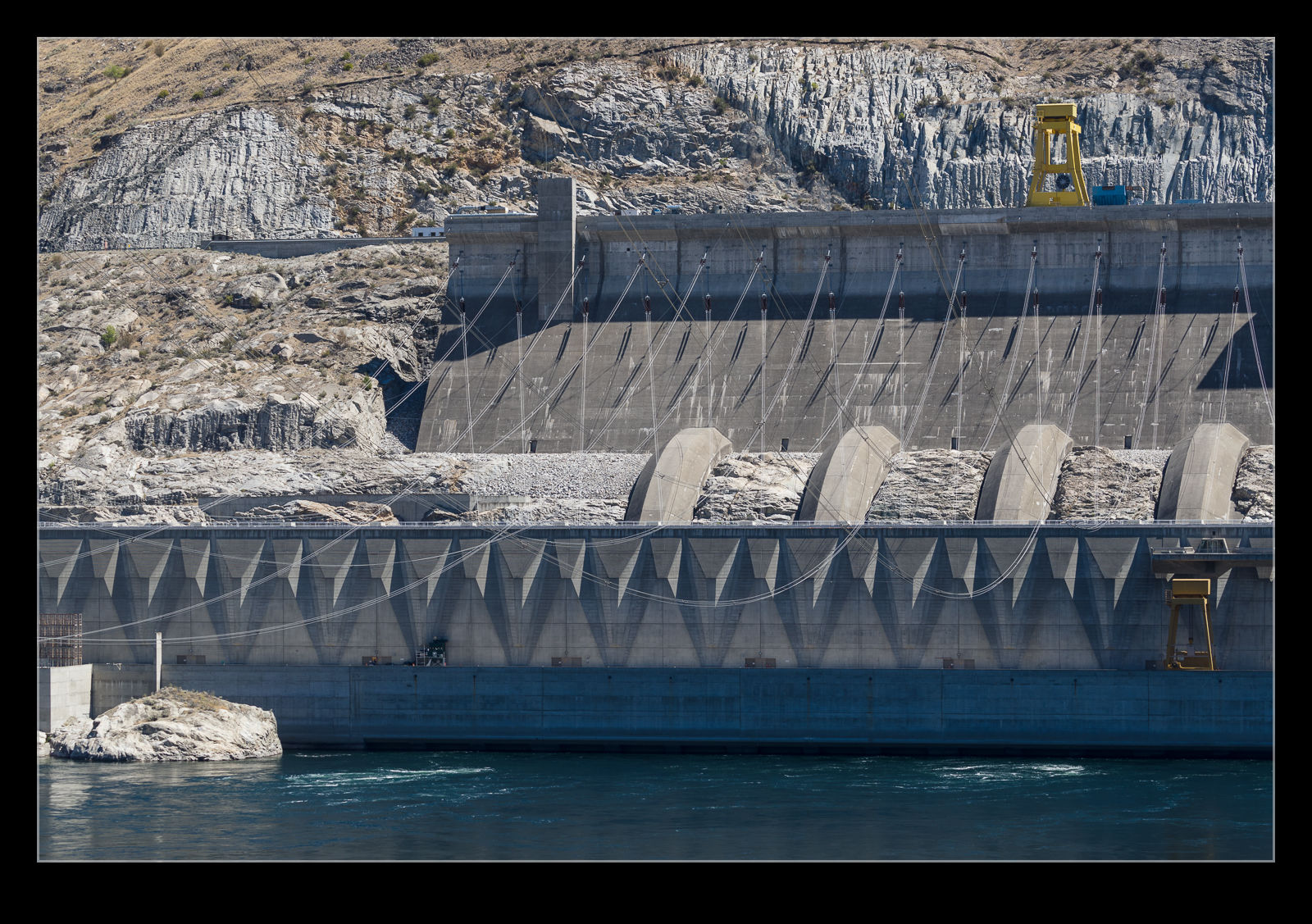 When things are more normal, there are light shows projected on to the face of the dam.  People gather in the park and surrounding areas to watch the light show after dark.  I assume this is not happening at the moment.  However, the lighting rigs are down on the shoreline in the park.  I imagine it might be quite a fun thing to see. 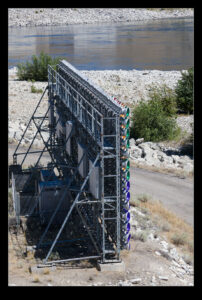 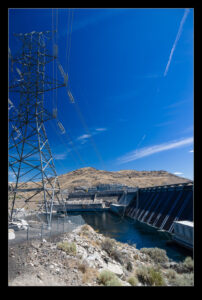 My plan for my big day trip was not only to see aviation related things.  Clearly that was the main focus but I decided to add some other stops to the journey.  One of these was to be the Grand Coulee dam.  Halfway between Brewster and Grand Coulee I was surprised to come across another dam and not a small one by any standards.  The Chief Joseph Dam was right alongside the road so I figured I had to stop and take a look.  Apparently it is the third largest hydroelectric generator in the US but I had never heard of it! 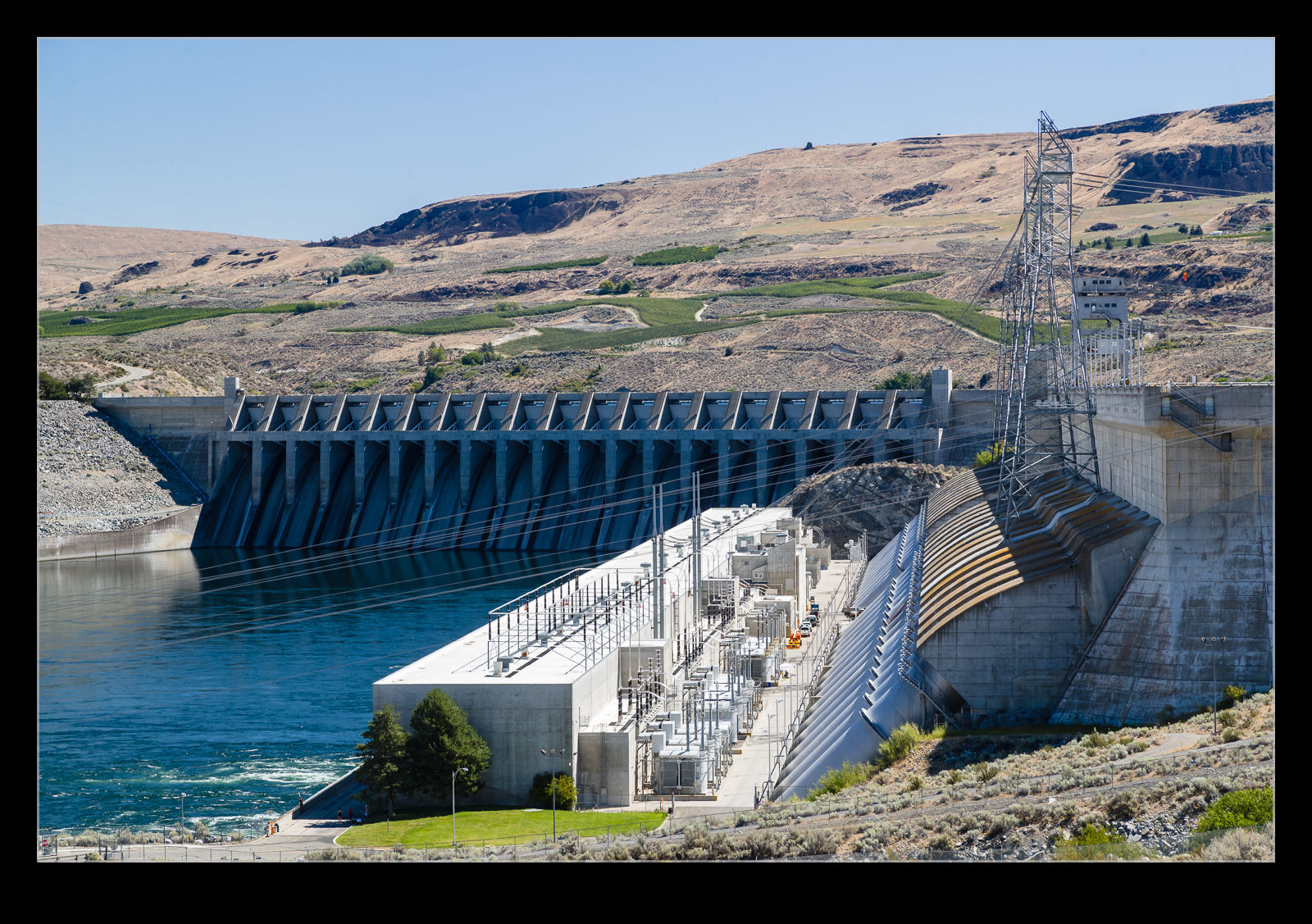 You could drive right down to the water under the dam and it seemed to be a popular place for people to come fishing.  A bunch of guys were spread out along the water looking for a bite.  I was more interested in the dam itself so drove down, took some shots and then continued on my way.  I then crossed the river and headed up the hill on the other side. 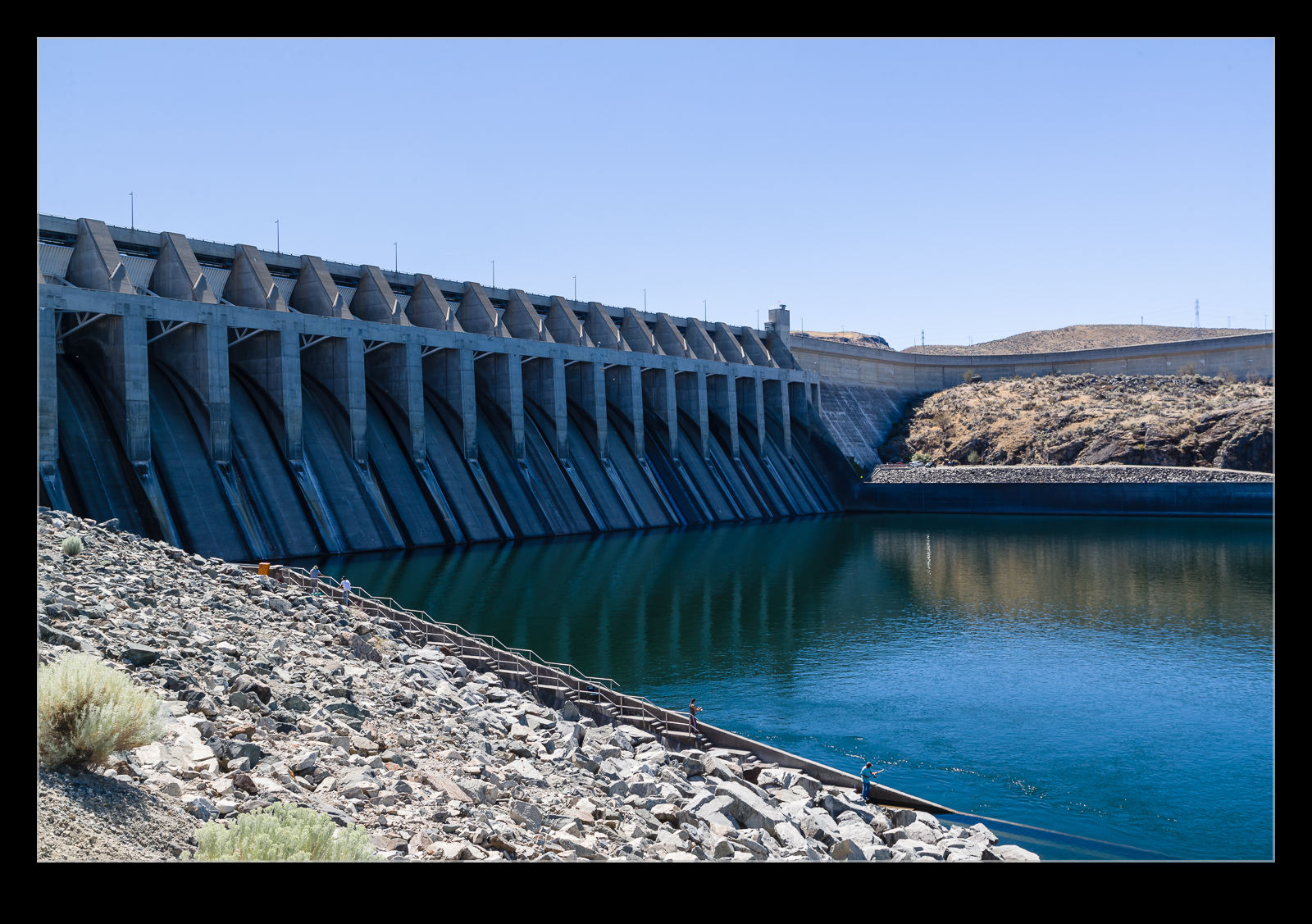 Near the top, there was an overlook stop for the dam so I figured another short diversion was in order.  Getting a look at the dam from the opposite side would give a different perspective on the structure (and add some pictures for any potential blog post!).  There was a picnic area up at the overlook and a terrace for people to get their pictures.  With a large family group over there taking plenty of pictures of each other, I decided to let them have their space and found a different spot to take my shots.  Again, a quick visit and then back on to my scheduled trip. 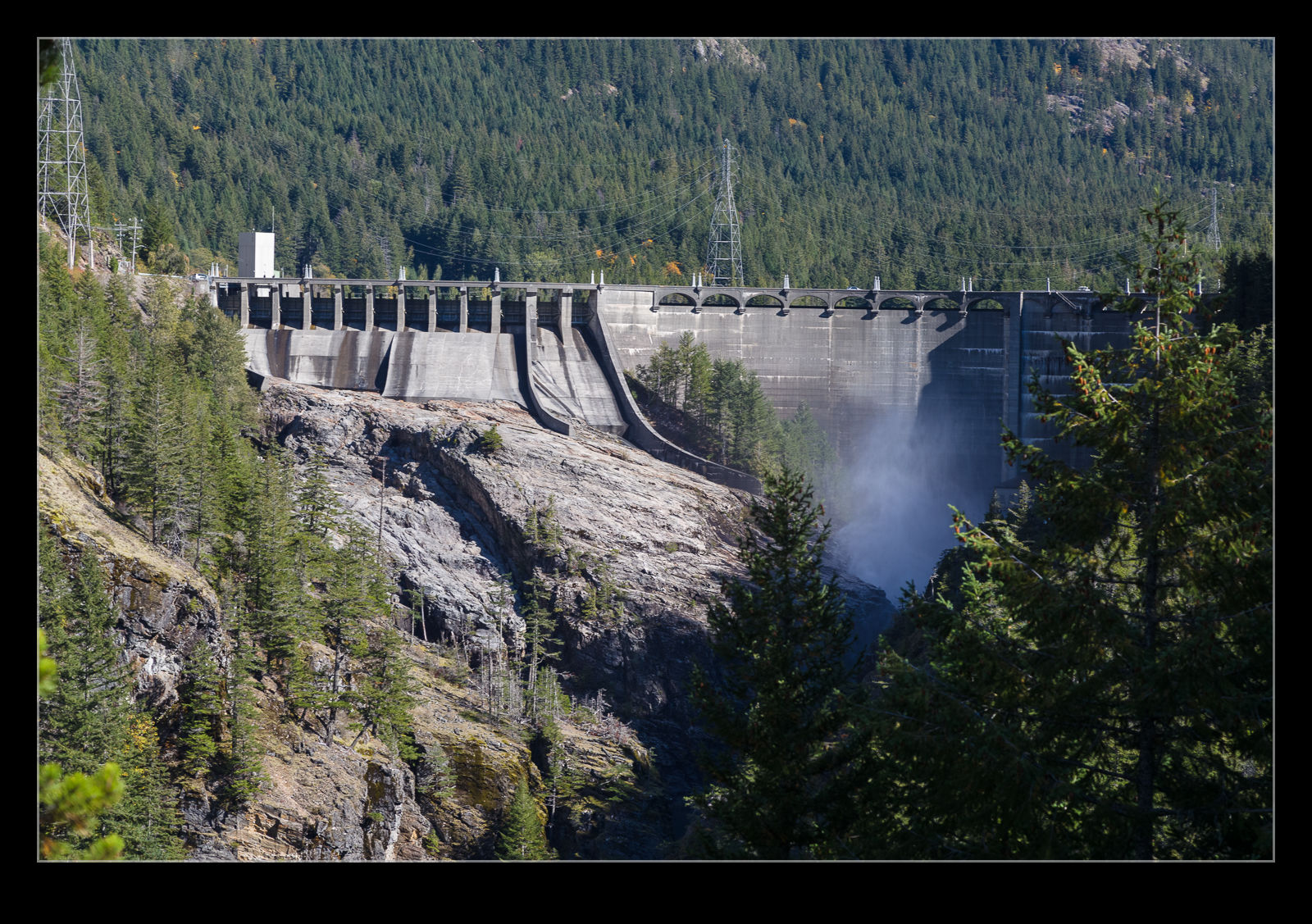 Up in the Cascades, there are a bunch of dams.  The rivers have been dammed to provide hydroelectric power.  The lowest dam was not terribly cool looking but the dams higher up the pass looked a lot more like you would expect a dam to look.  One of them was easy to see although it was deep in shade while the rest of the scene was very bright.  HDR seemed to be the way to go.  The last dam we passed was visible from the highway but it was hard to get a clear look at it without some vegetation getting in the way.  Time to reach above your head while standing on a rock and using the Live View mode to try and see what you were shooting.  Limited success but at least you could see something. 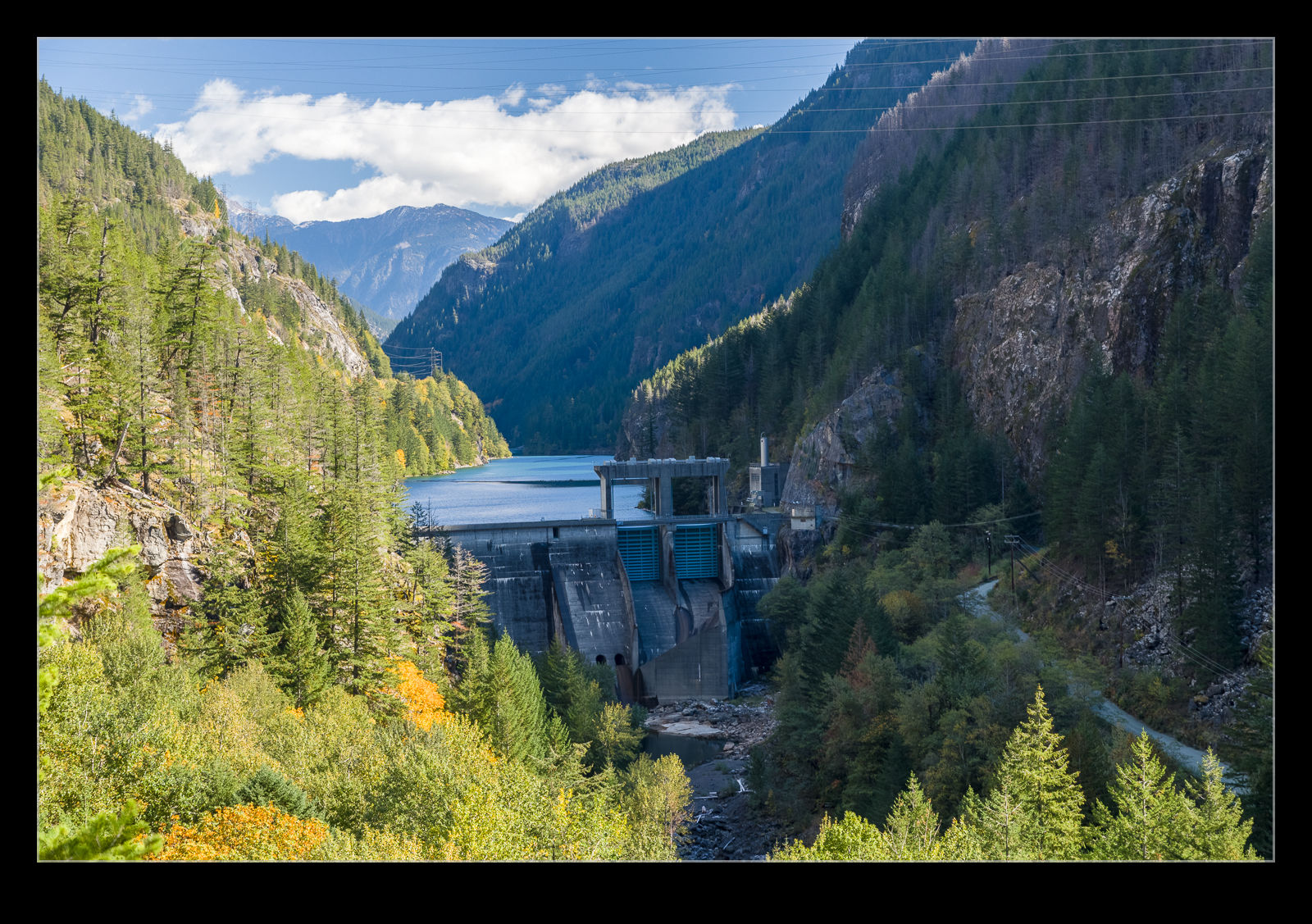 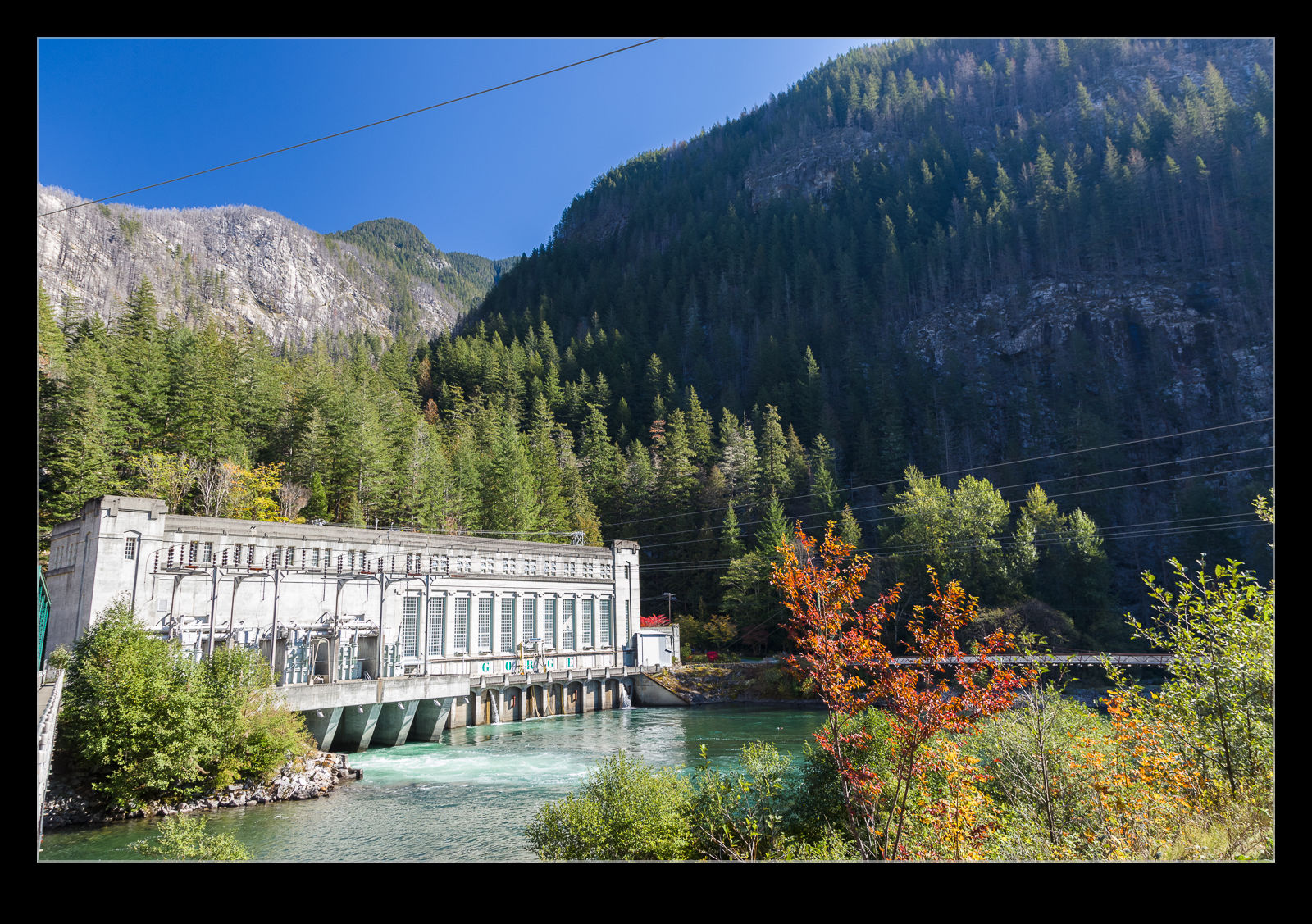