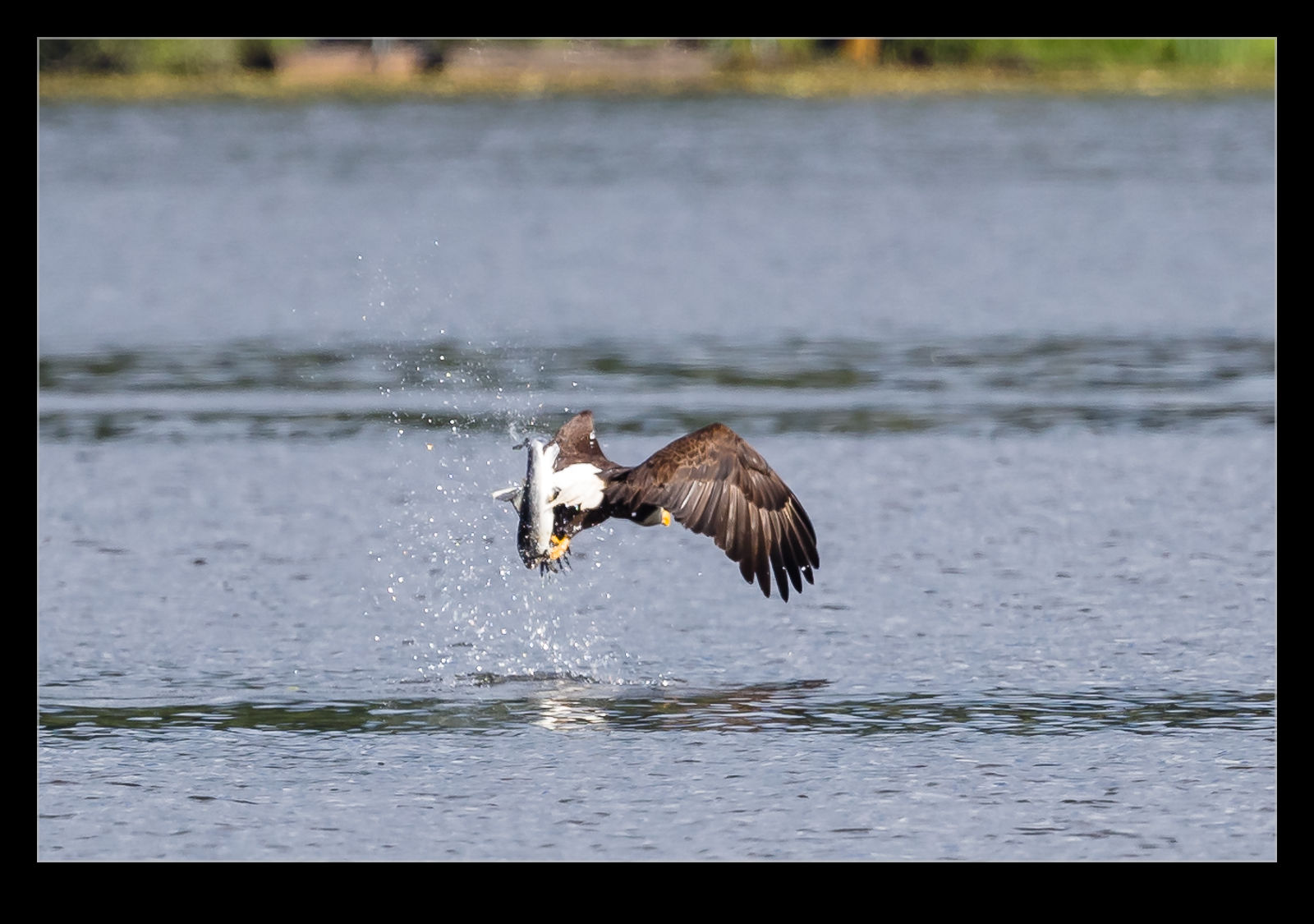 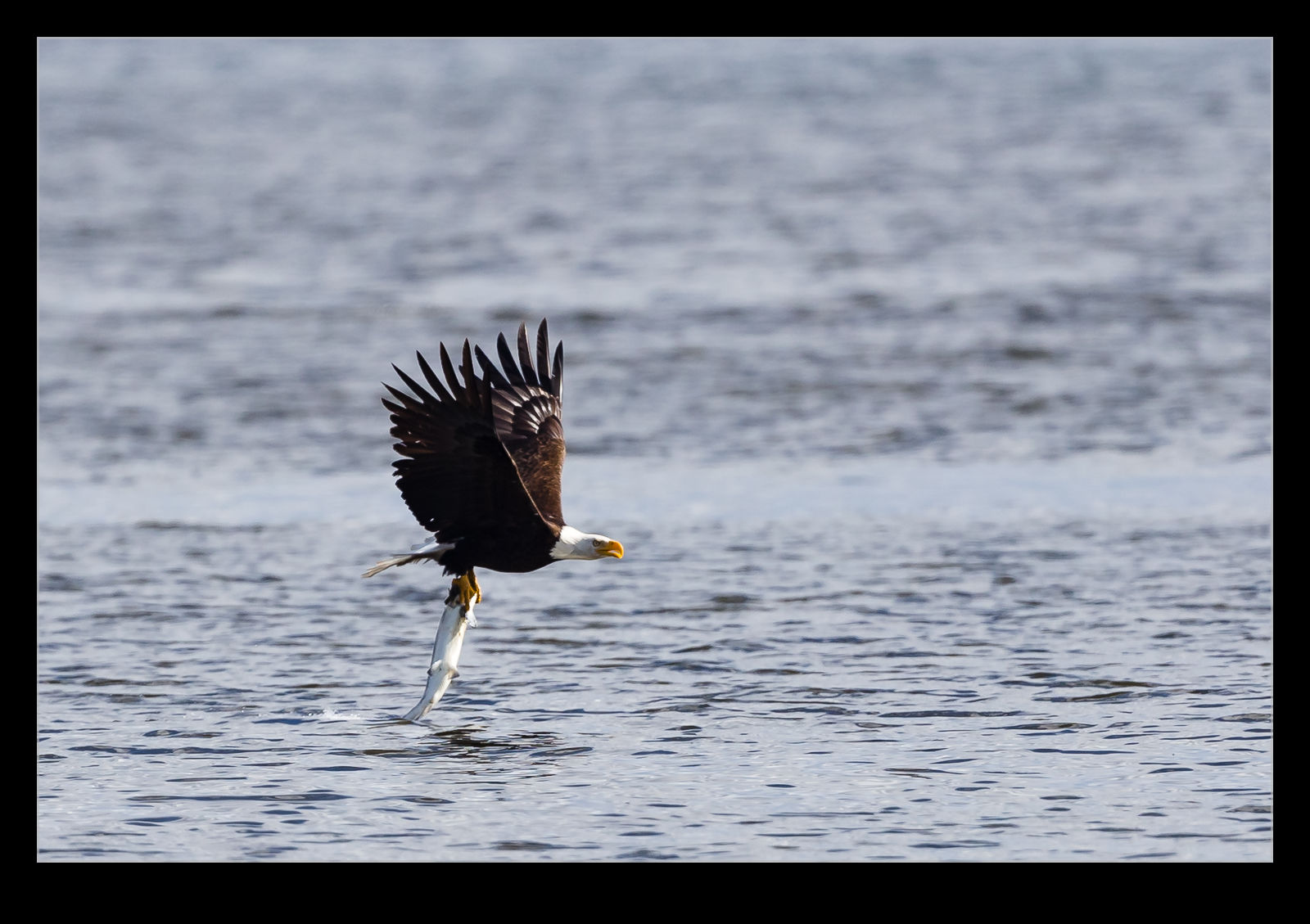 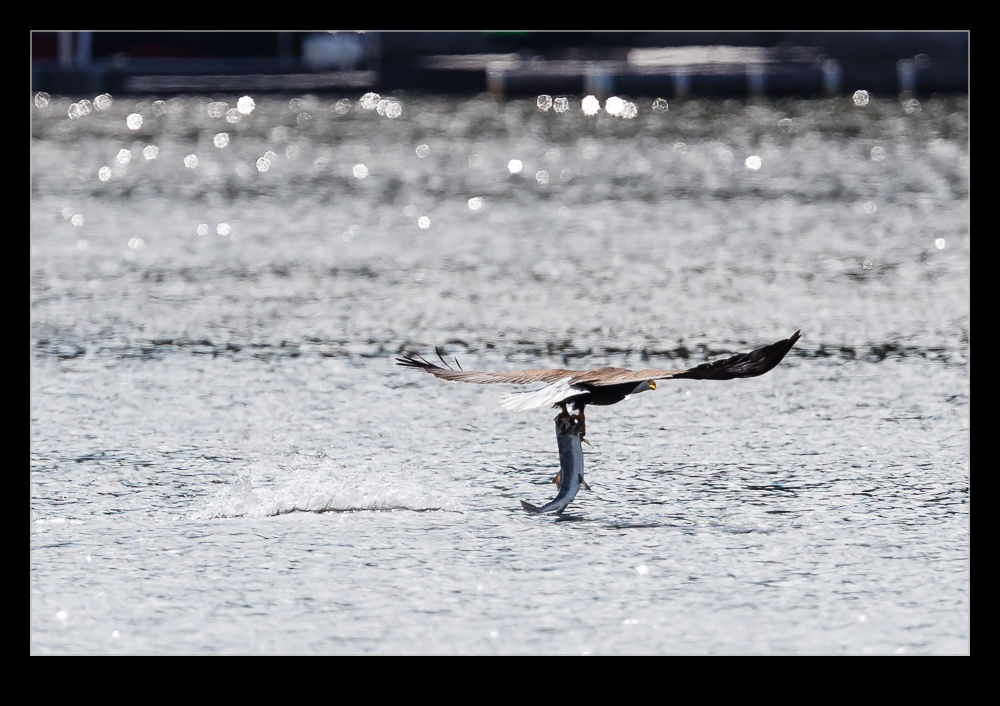 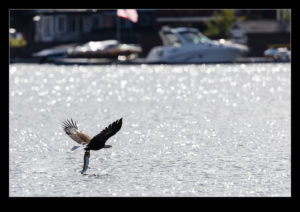 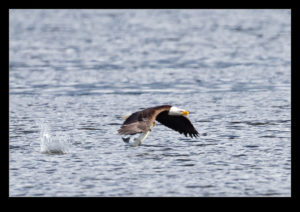 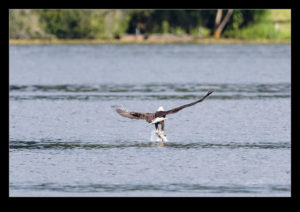 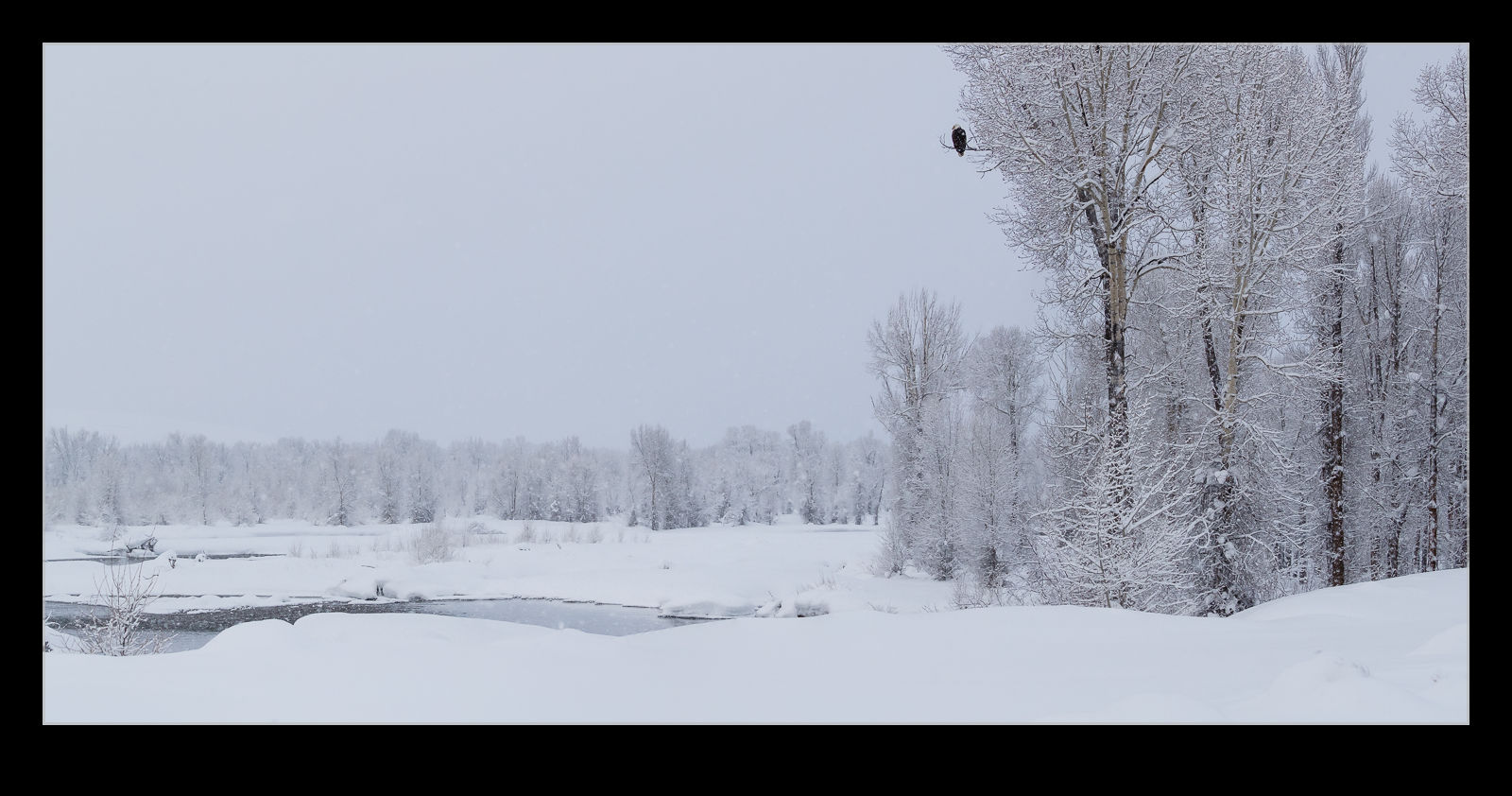 Jackson Hole included some large birds in the selection of wildlife on offer for our visit.  We got to see some eagles at a distance.  Bald eagles were not a surprise but I was unaware that Golden Eagles live in the area too.  They are one big bird!  It would have been nice to get a bit closer but eagles do what they want and you have to be happy getting what you can. 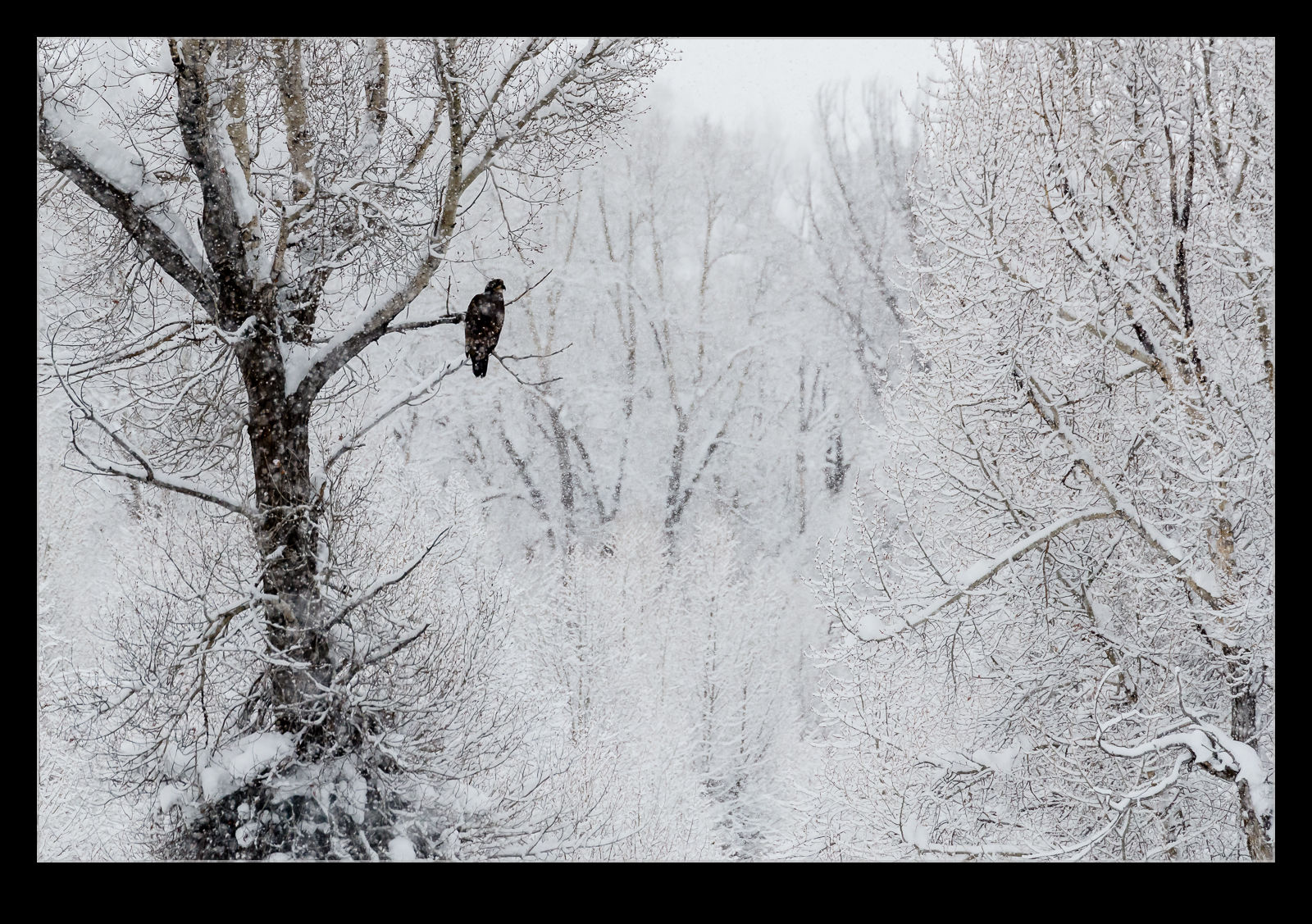 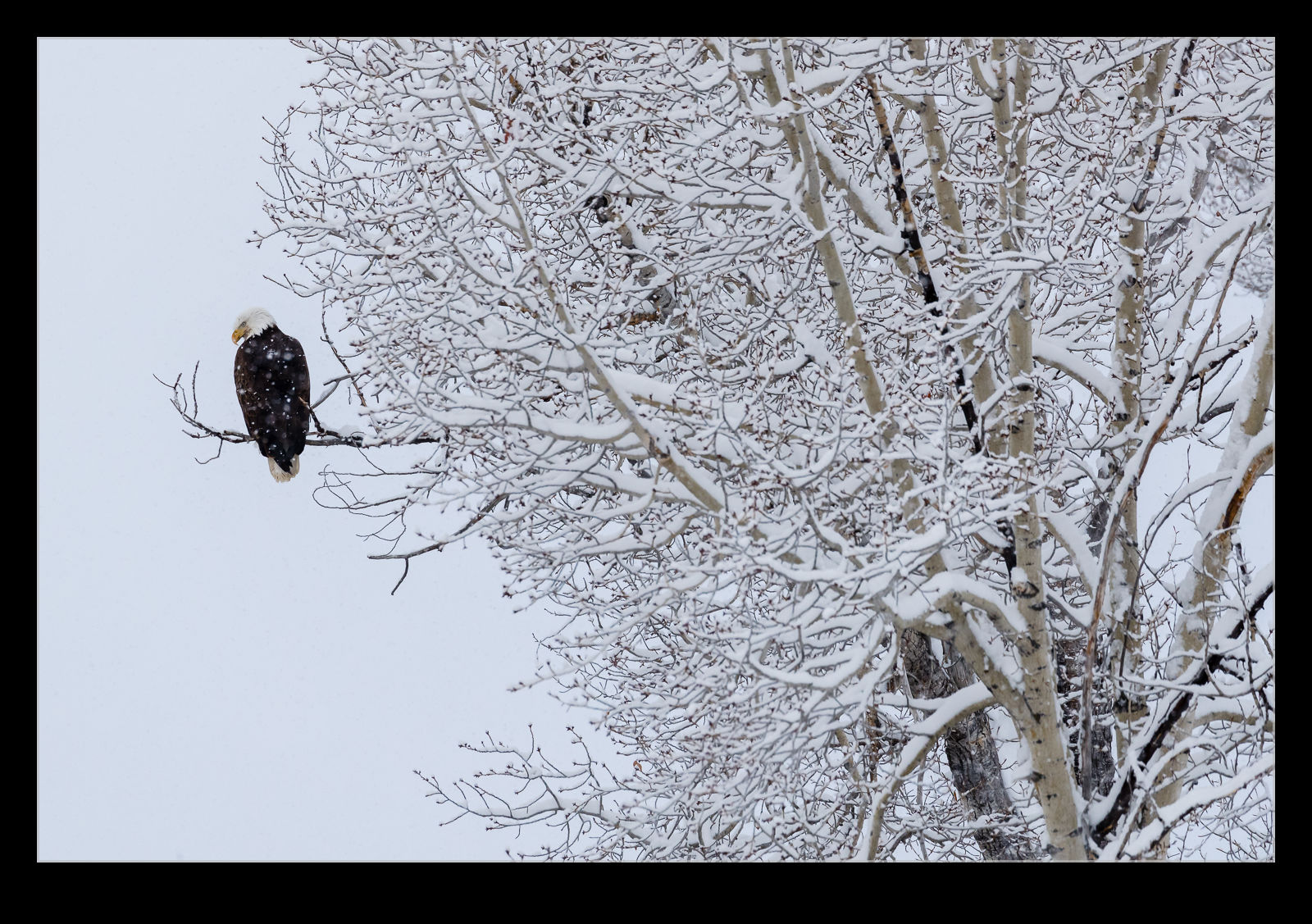 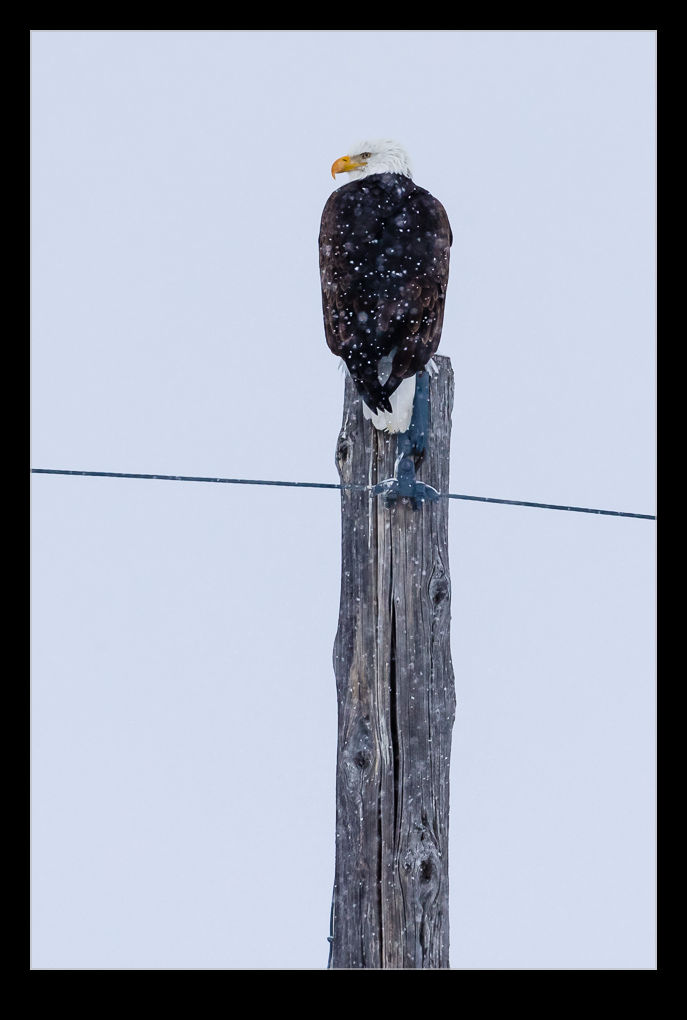 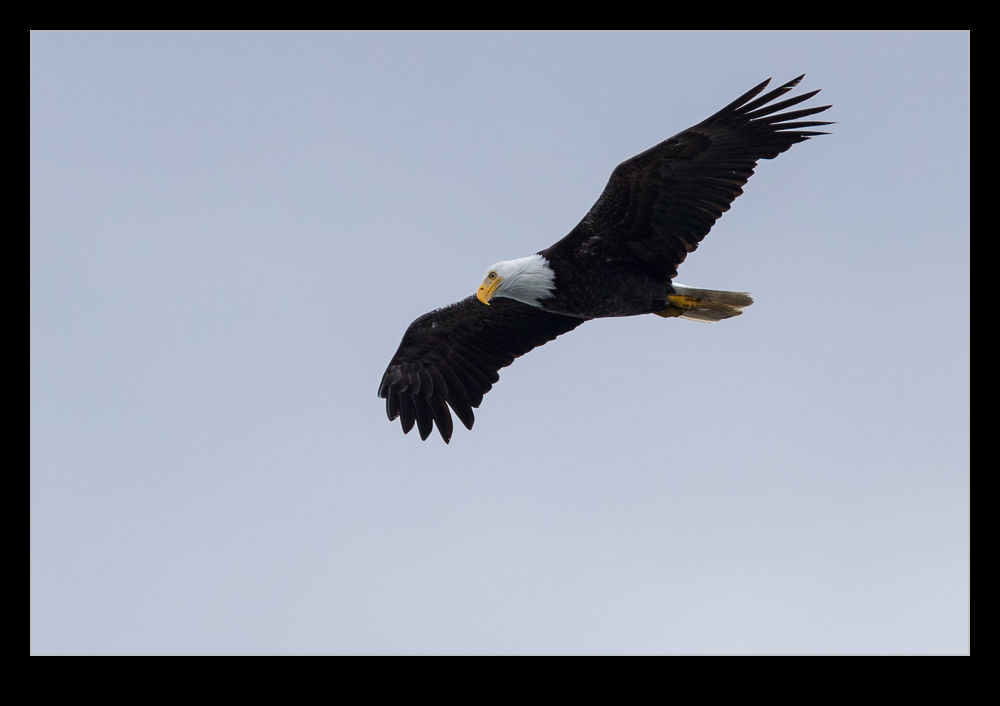 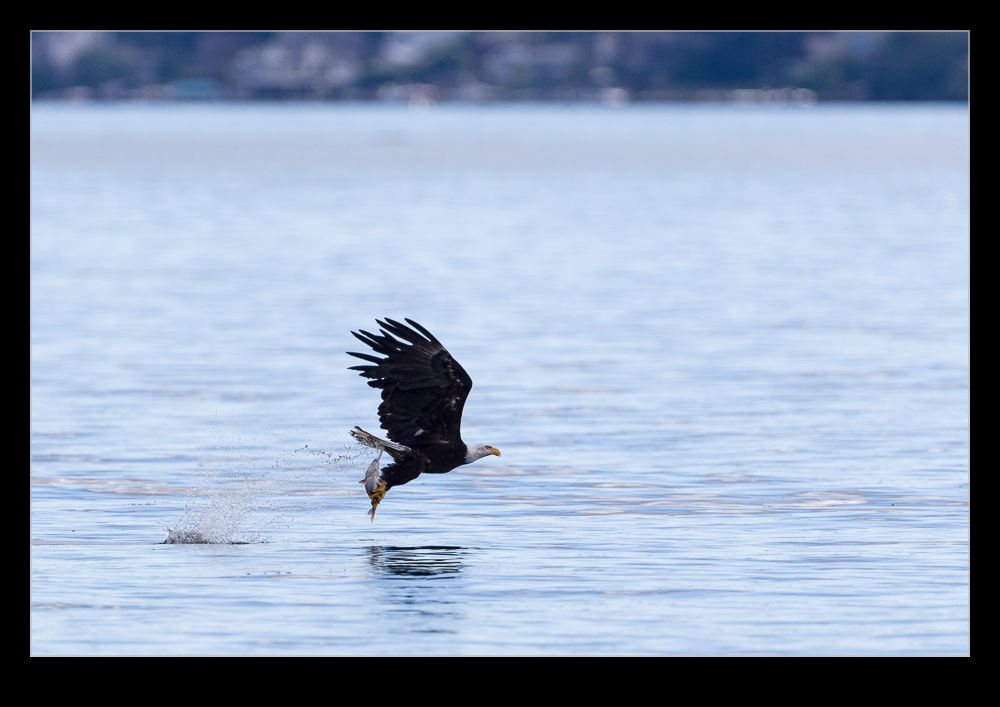 The ospreys on Lake Washington have got some attention on the blog recently.  However, they are not alone.  Some bald eagles have also been showing up.  They aren’t around in such large numbers and I didn’t see so much fishing activity close by but they were out there having a hunt for some food and sometimes came closer in allowing a shot or three.  They are an impressive looking bird. 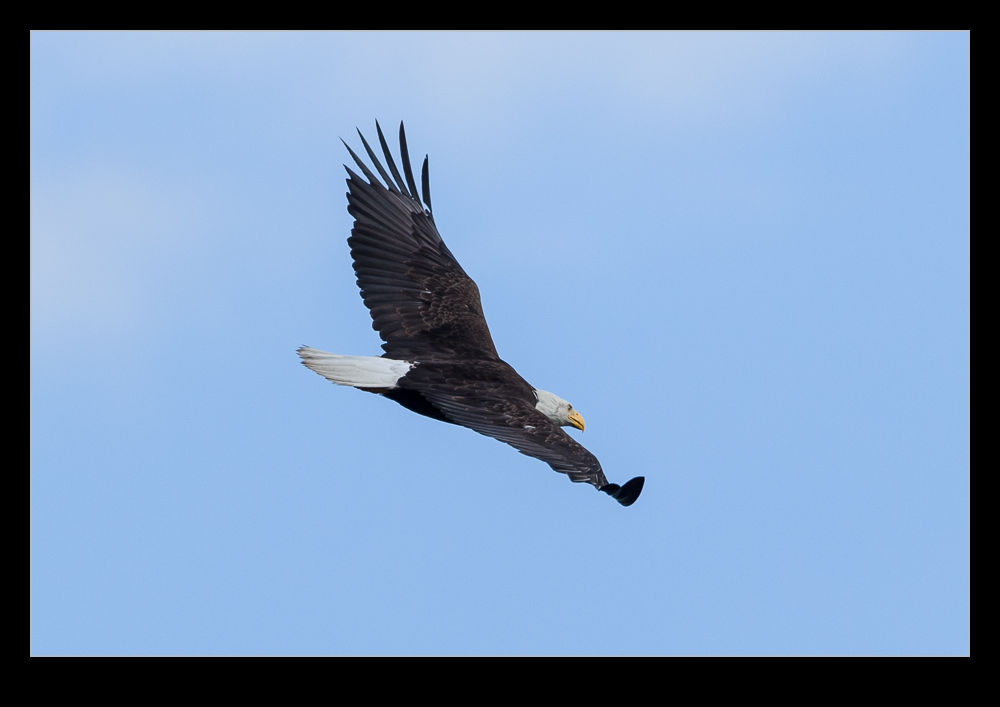 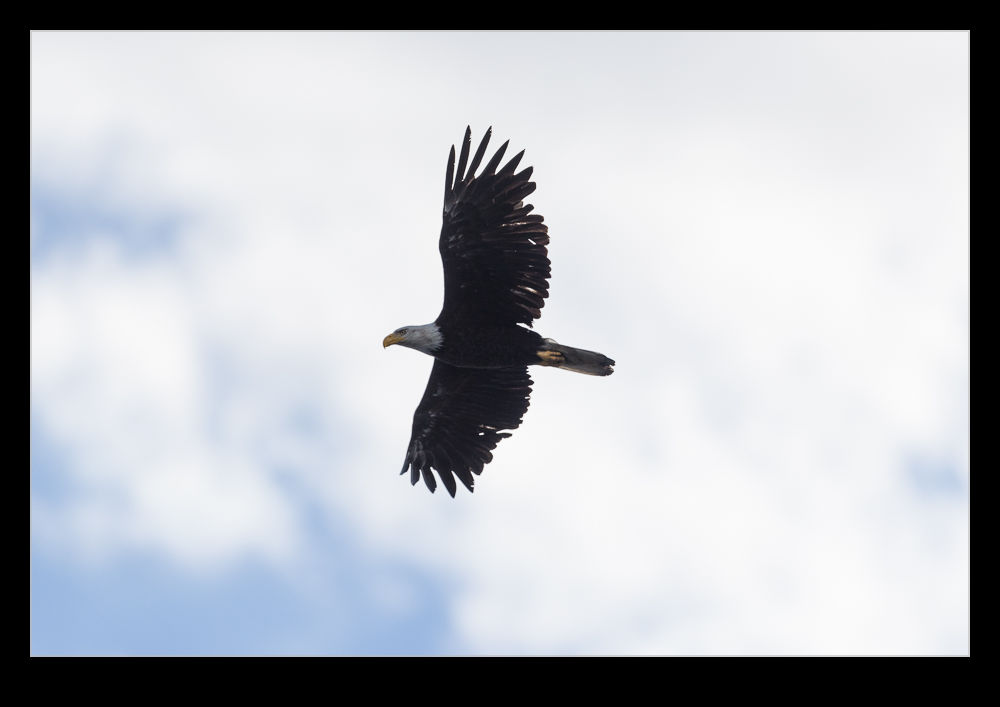 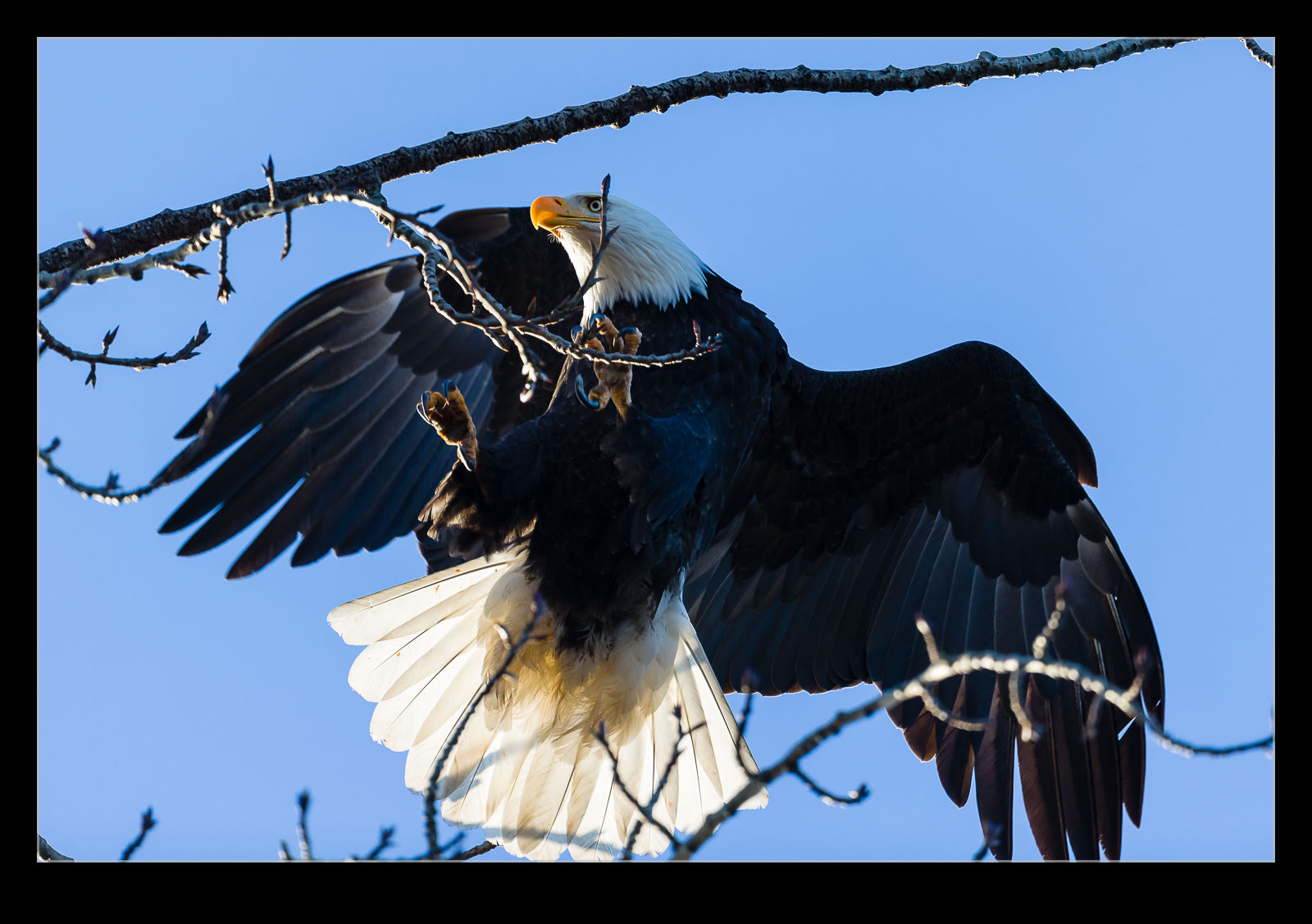 The presence of the eagles on Juanita Bay was something I have seen before but I had not been out with the camera before to catch them.  I saw one eagle hunting out on the water as I moved towards the bay and this startled the wildfowl as I mentioned in a previous post.  The eagle involved then flew back to one of the trees on the shore and perched there for quite a while.  I got to one of the boardwalks in the park where I could sit it waiting, a little far away and almost directly in the sun.  Time to wait. 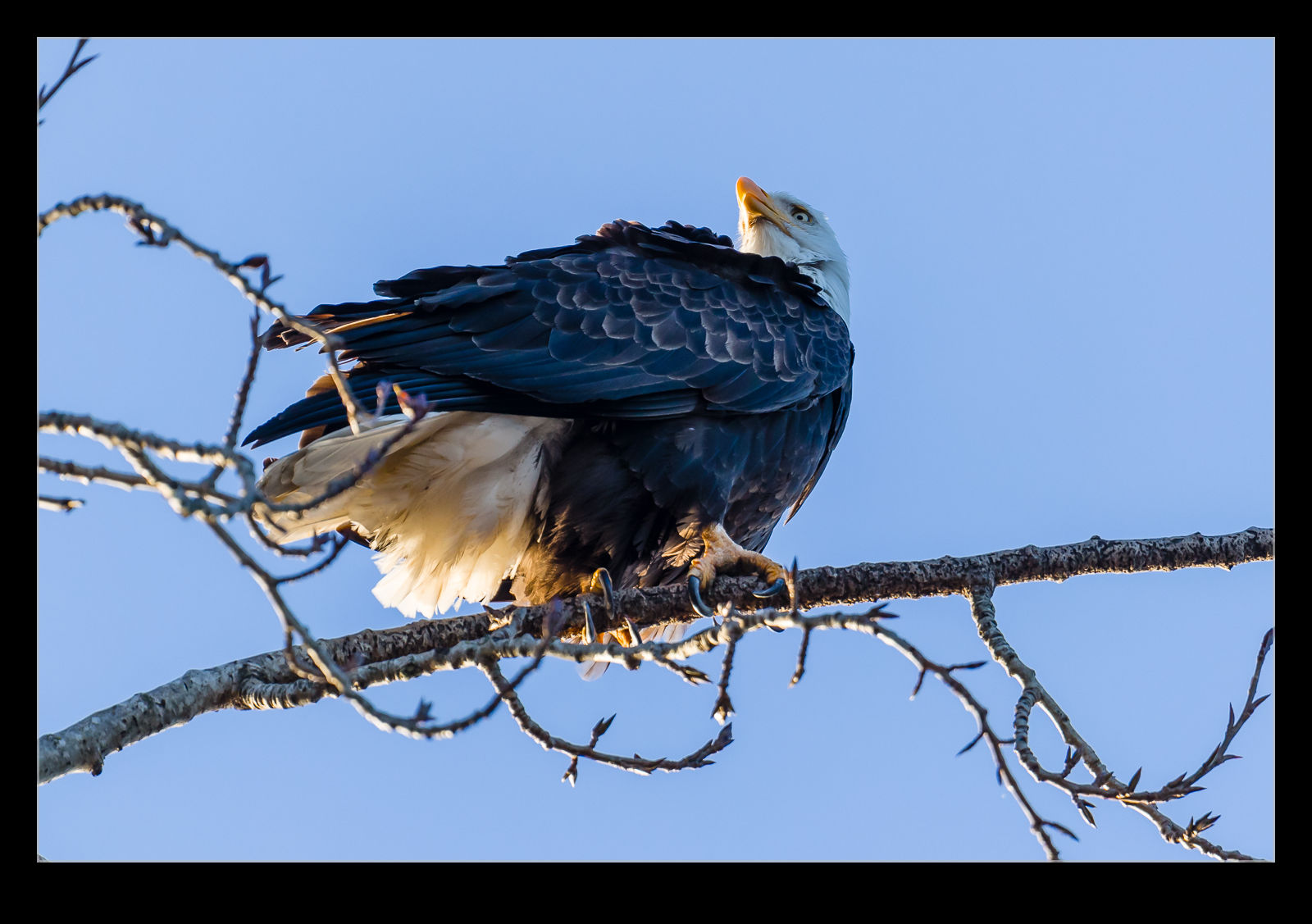 I hung around for quite a while hoping this eagle would make a move.  It seemed to have more patience than me.  Meanwhile, I was looking around to see whether anything else was on the move – the swans perhaps.  Then my eye caught some movement coming across the bay towards me out of the background of the hills opposite.  I suddenly realized that it was another eagle.  It was already climbing as I realized and I tried hard to get the camera up towards it despite having the monopod attached.  I got a focus on it just as it reached the tree branch it was aiming for.  A great flare of wings and then it was perched, almost directly above me. 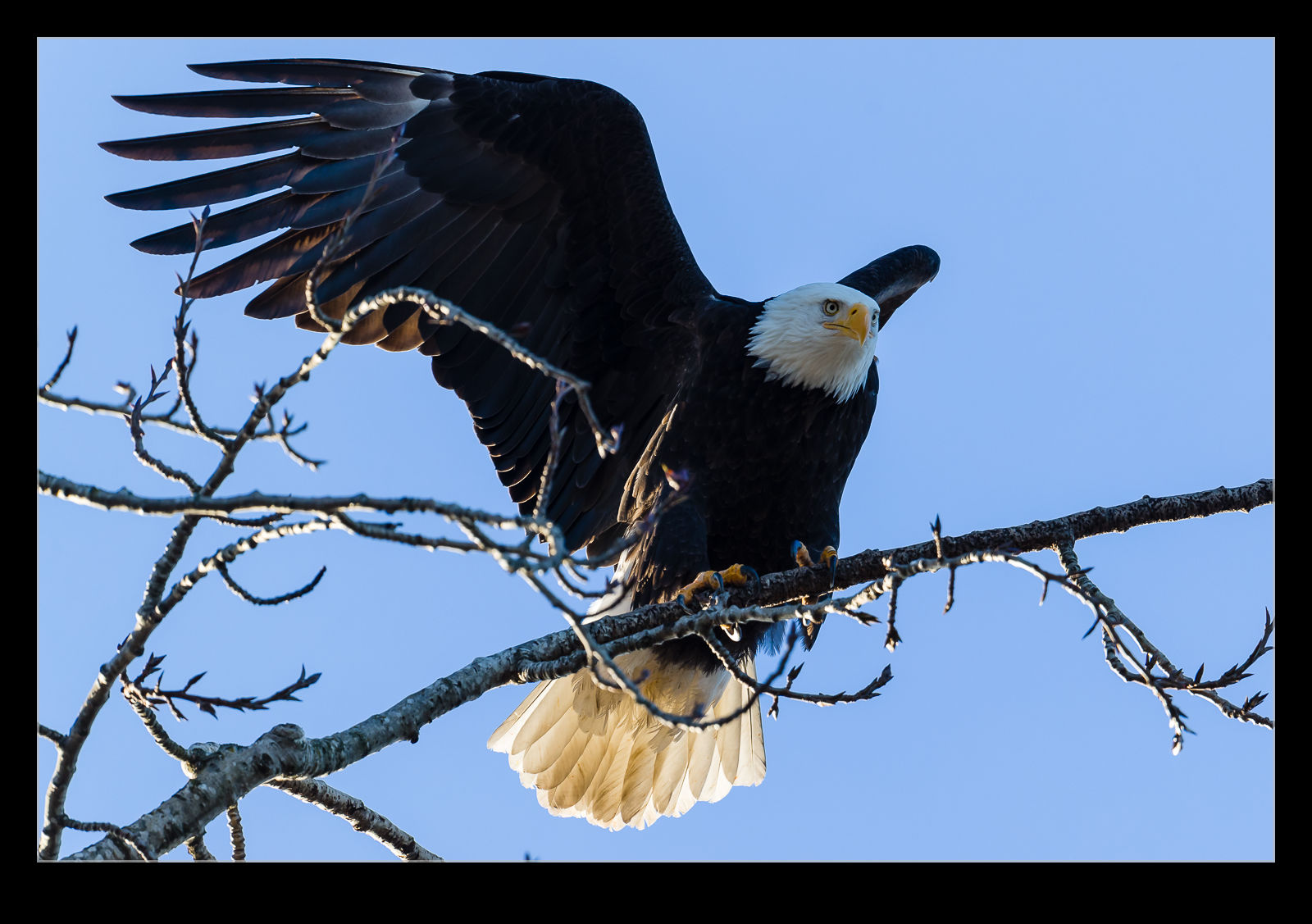 I got a bunch more shots of it as it found a comfortable position on the perch and there is remained.  I was getting pretty cold and the light was fading so I decided to head back around the park.  The last I saw it was still up there.

I was walking along the edge of the lake in Juanita carrying the camera.  Juanita Bay is popular with bird life and I saw a lot of the wildfowl suddenly burst into life and start flying towards me.  I pulled the camera up and started shooting.  I wasn’t sure what was going on but figured I could try and work that out later.  Meanwhile there were a lot of birds coming at me.

It was soon clear what was occurring.  There is a pair of bald eagles that frequent the bay and one of them was soaring across the bay.  It pulled up and landed on a pole out in the water and very close to the birds.  This obviously spooked them and they all bolted for the shore and, perhaps, safety.  The eagle didn’t seem to bothered about them to be honest but they are not averse to a change in diet once in a while so I understand why there was such a reaction.