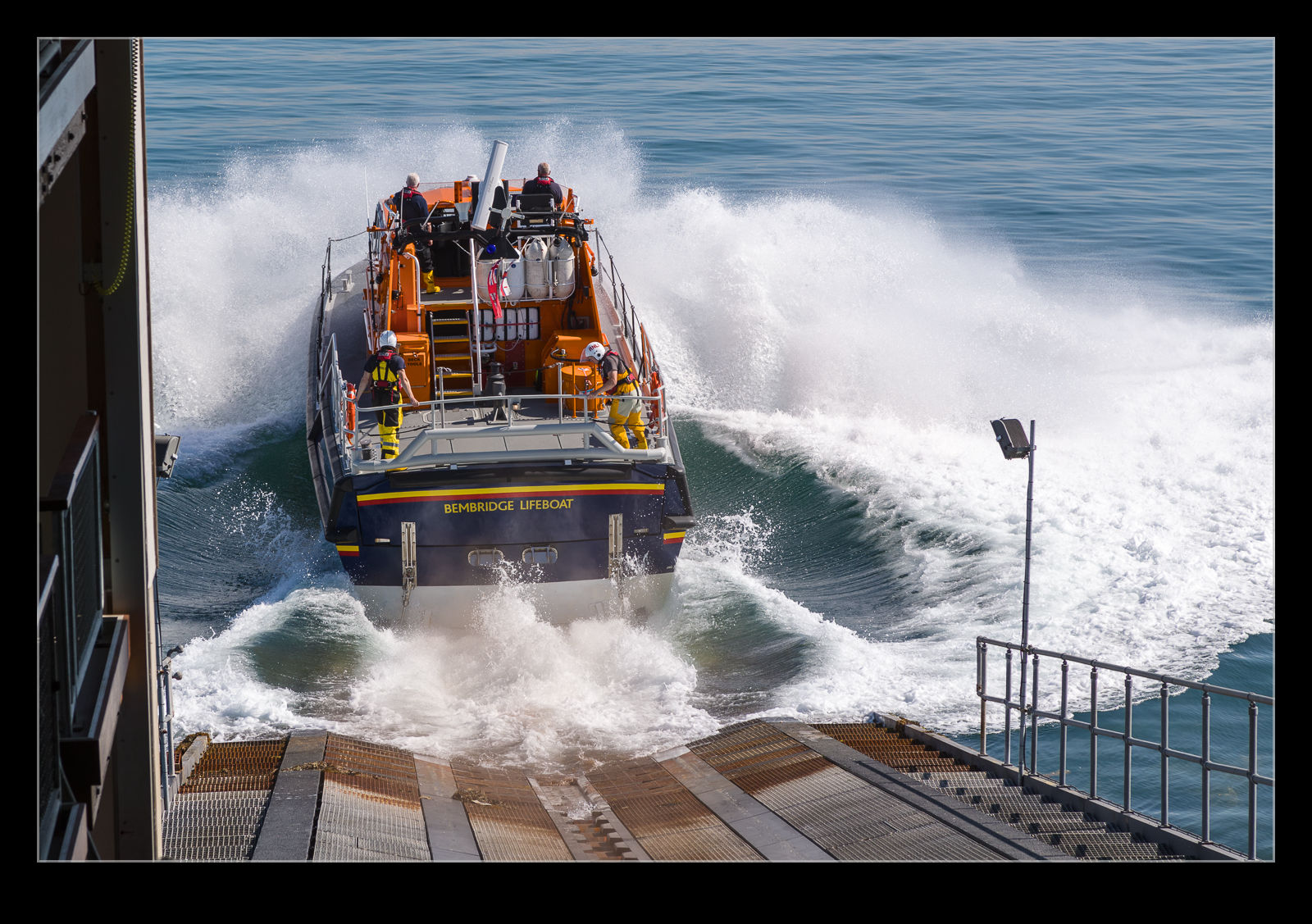 When the old lifeboat station was in use, it was a lot more constrained.  It was not designed to accommodate many visitors and it certainly wasn’t intended for them to be there during a launch.  The new station at Bembridge has plenty of space for visitors (as long as there aren’t too many of them) and you can stay in place during the launch.  In fact, they want people to witness the launch since fund raising for the RNLI is vital to sustaining the service. 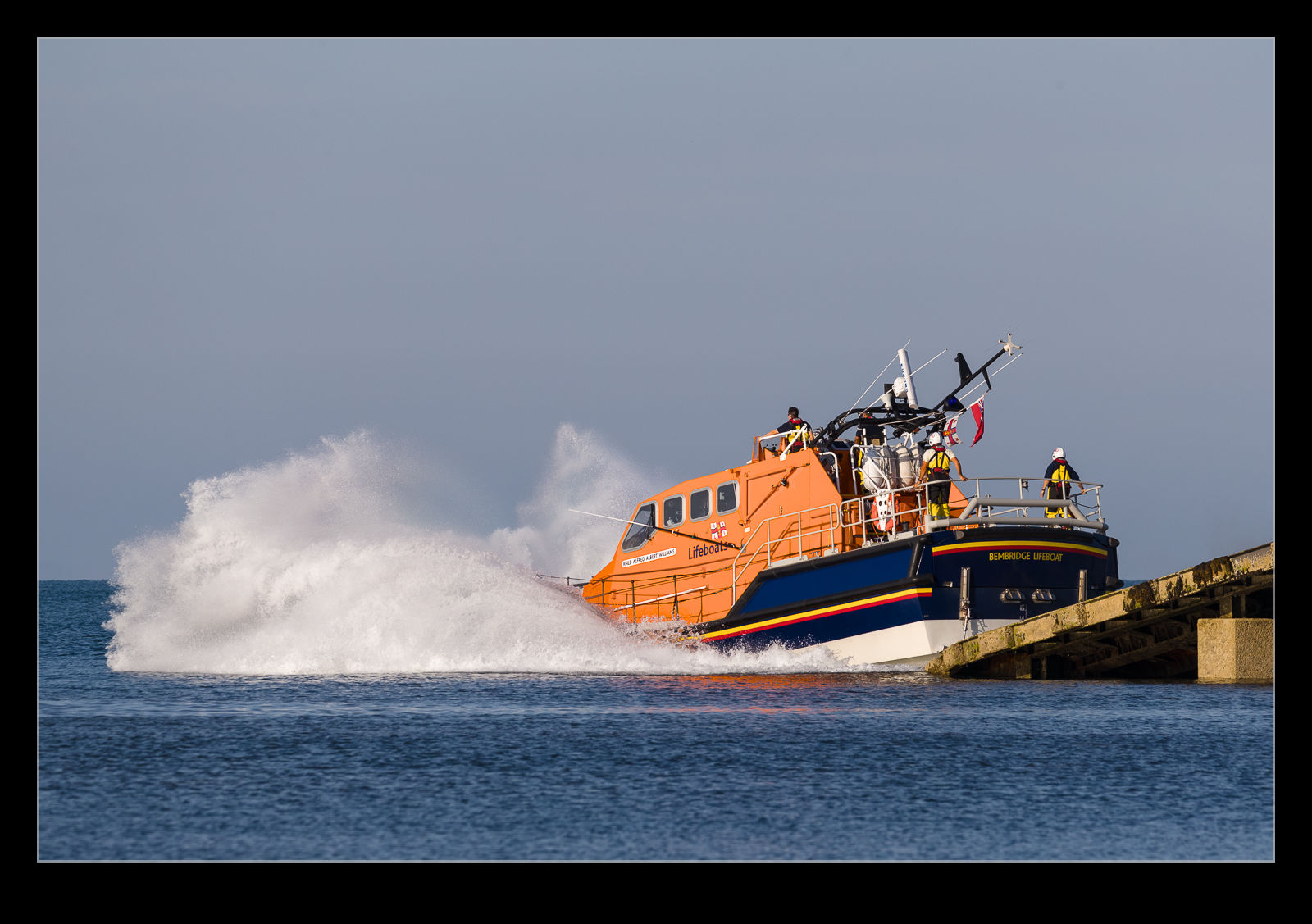 I got there ahead of the crowds and asked the crew where a good spot was to watch the launch from.  The pointed out a corner in the railings behind the boat as the best spot so I stationed myself there and waited for things to get going.  In hindsight, I think they were mistaken.  If I am to go back again for a launch, I will aim to be in location directly astern of the boat as you will understand from the shots. 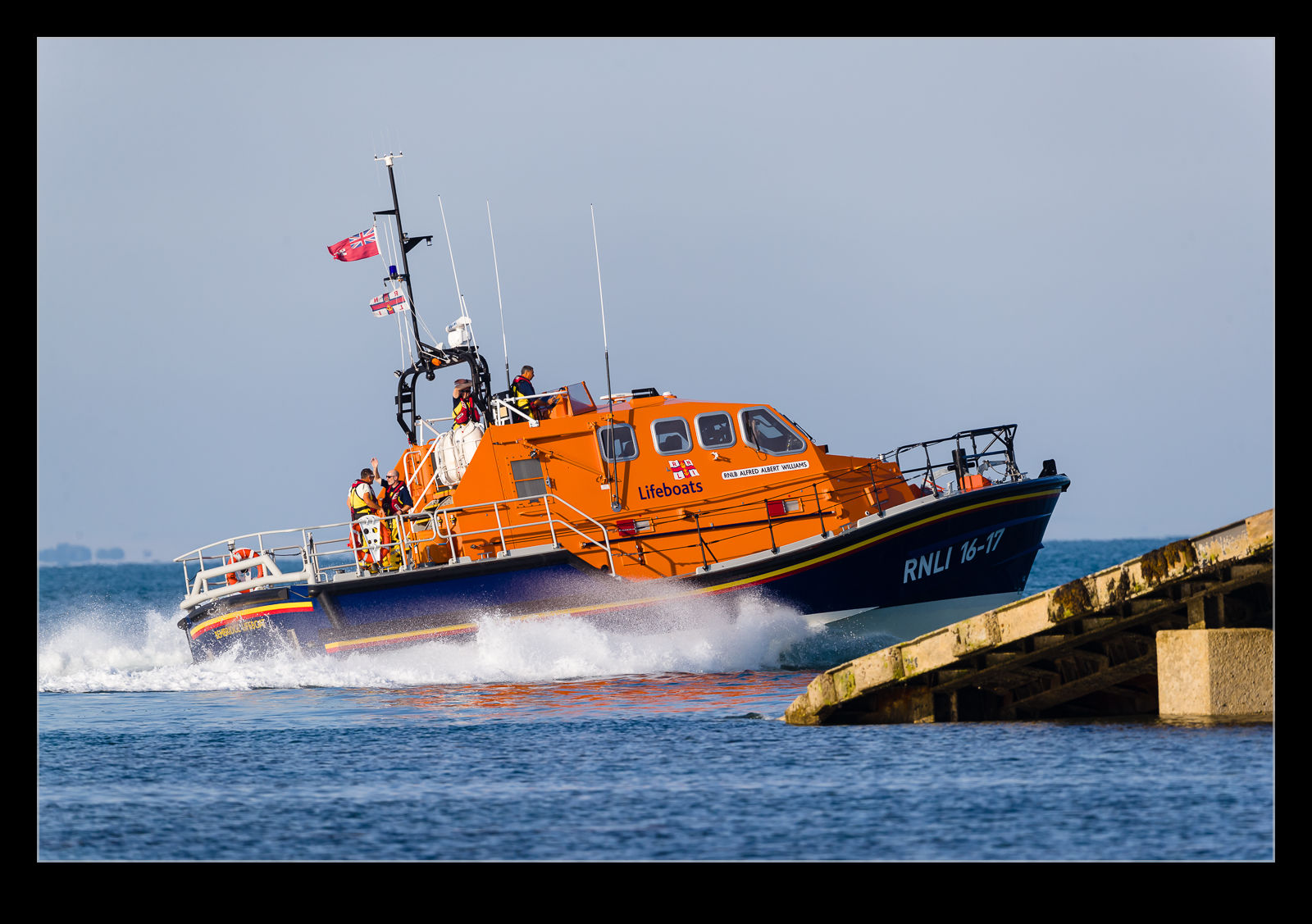 The launch sequence is pretty quick.  The boat rests on a tilting table to keep it level in the boathouse for maintenance work but to allow it to be repositioned for the slipway when needed.  They pull on a winch line at the back to move the boat slightly at which point it tilts nose down and ready for launch.  The engines are started and both props checked for correct rotation.  If all is good, there is a sound of the ship’s horn and then the restraining line is released and off they go down the slipway. 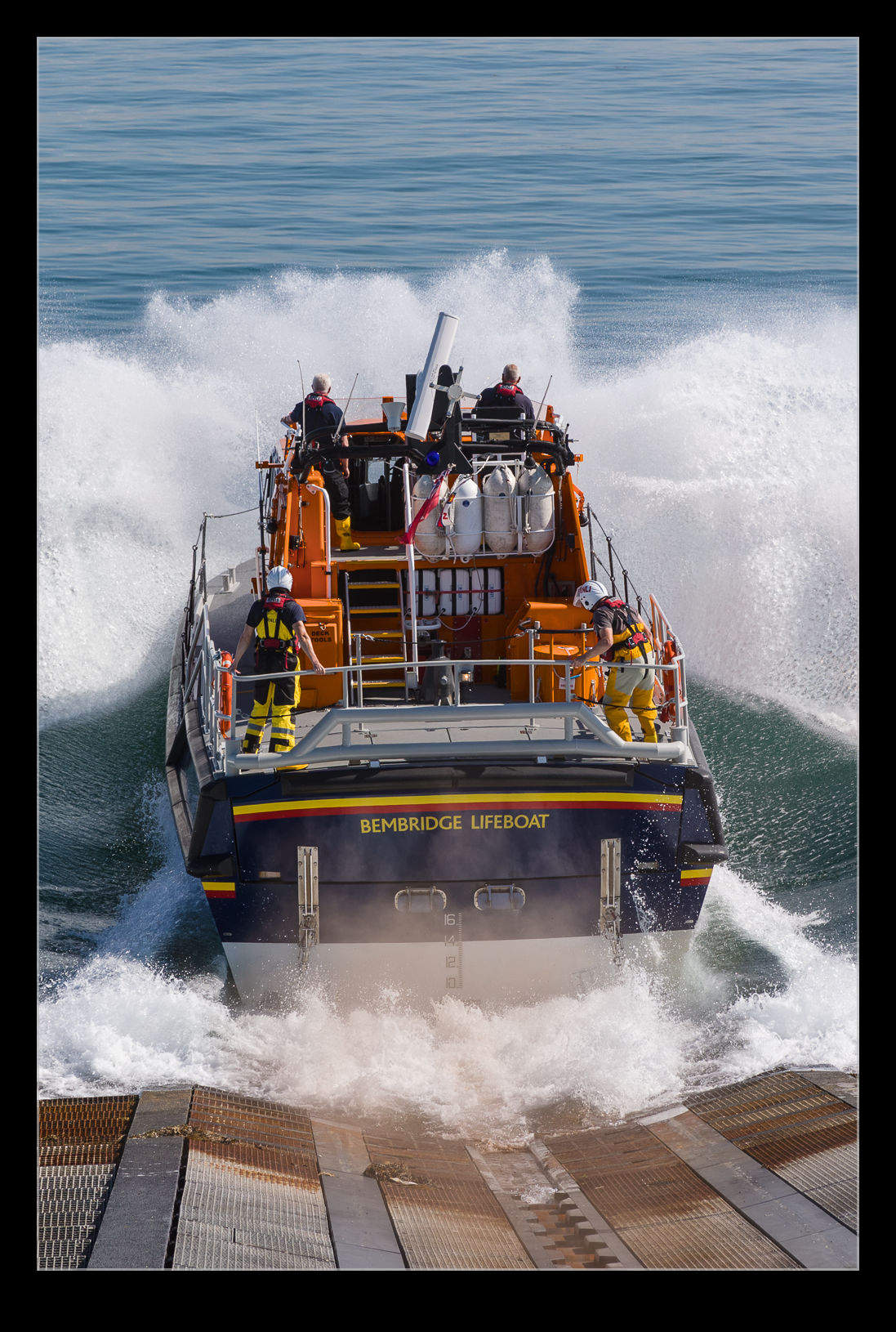 It depends on how low the tide is as to how long the run down the slipway is and how big of a splash there is when it enters the water, but the water entry is impressive to say the least.  My position meant I had a bit of the side of the boathouse in the shots which I regret but I think you can still see just how big of a splash there is as they enter the water.  One in the water, the mast is erected quickly (it is lowered when in the boathouse) and they are up to speed. 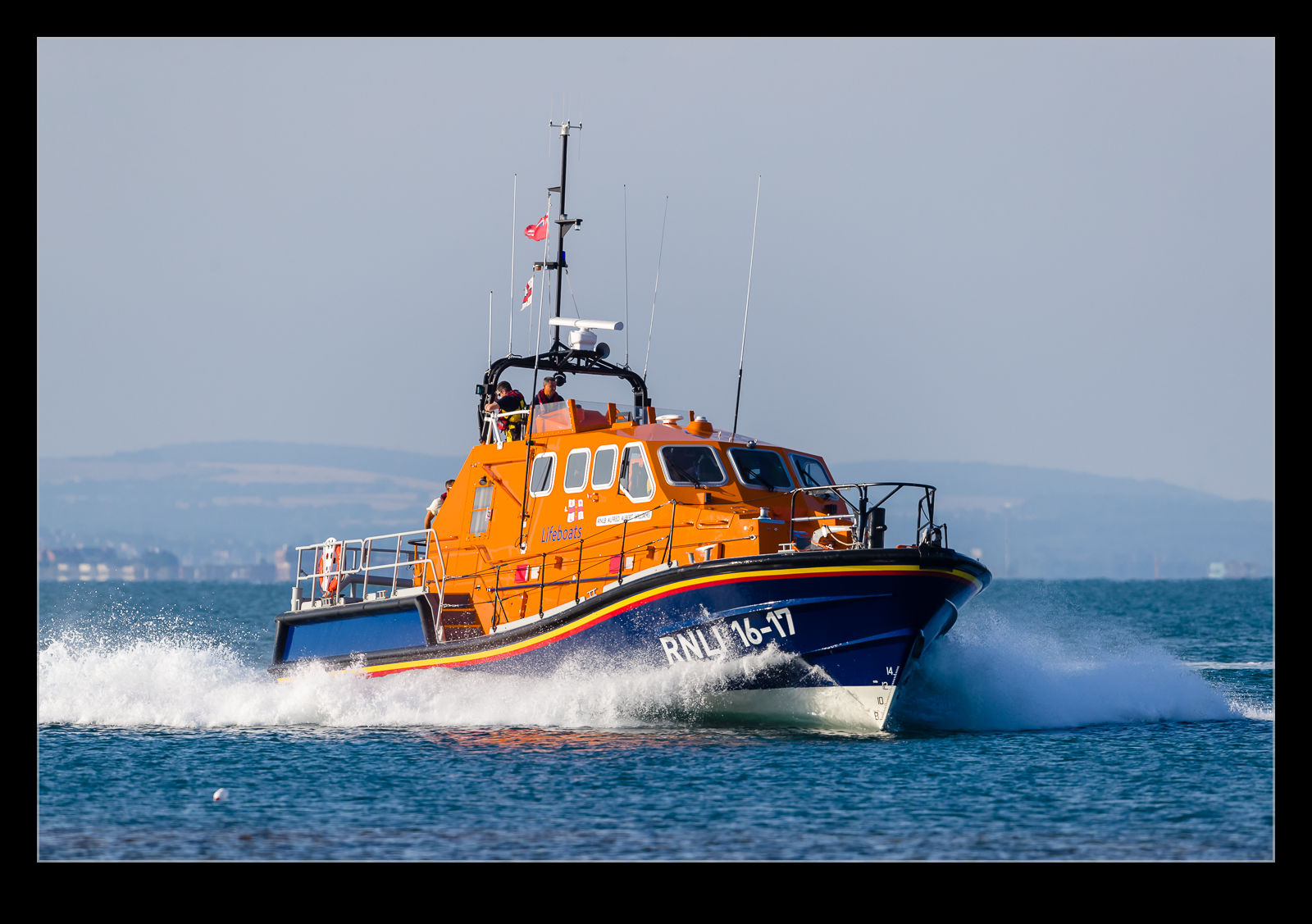 Since this was not an operational launch, they got the boat configured and then did a run past the end of the station to wave to everyone gathered to watch.  With the second launch planned for that evening, I persuaded Nancy and Mum to go along.  I think neither of them was particularly bothered either way, but they accommodated me and were so glad that they did.  The evening launch turned out to be the same boat.  I am not sure what happened with the swap that was planned but clearly plans had changed.  I left the twosome to head into the boathouse and positioned myself along the shore to get some different shots. 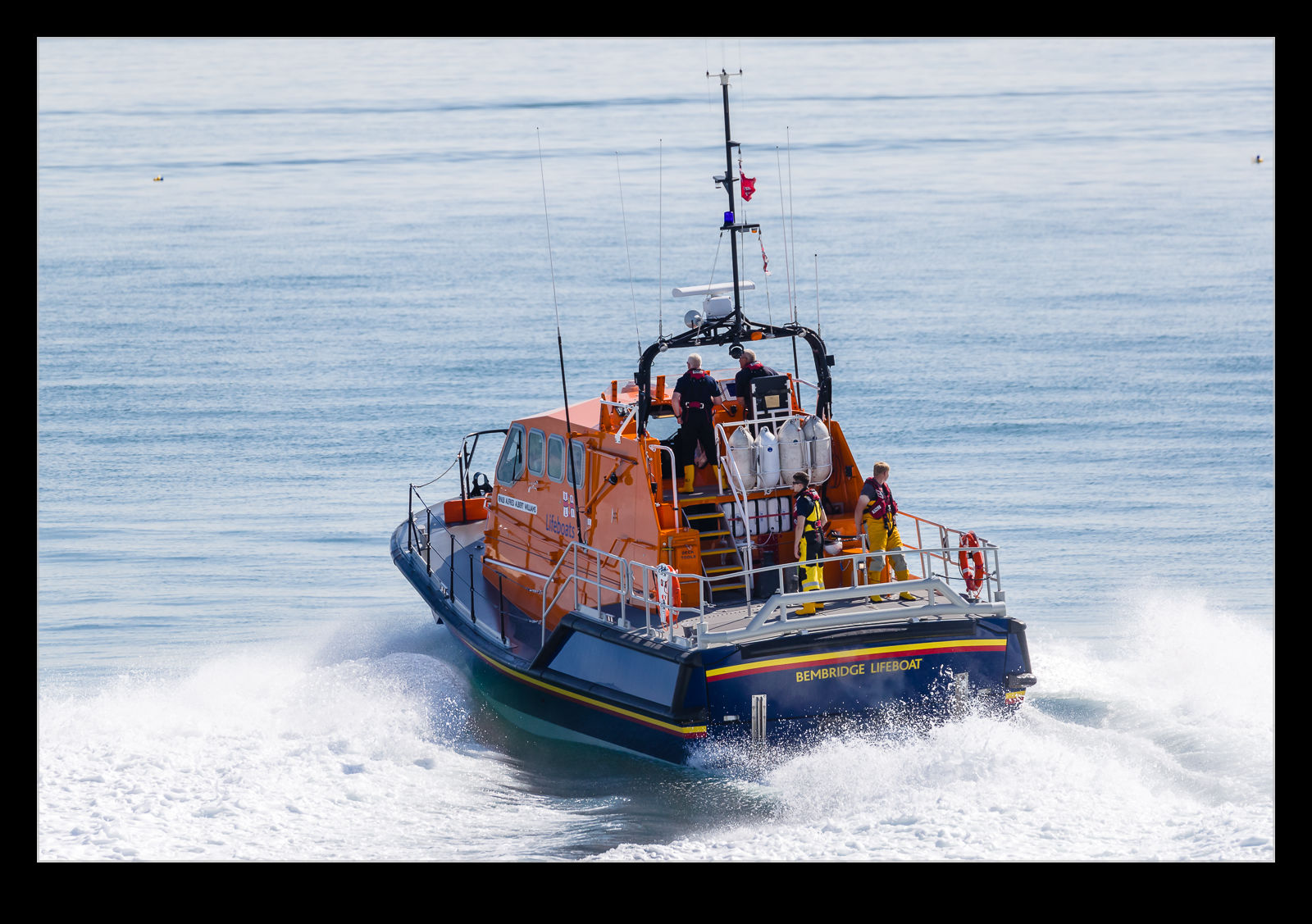 The tide was a bit lower so I figured the run down the slipway would be a bit more dramatic.  Unlike the morning launch, this one had been given more publicity so there were plenty of people showing up to watch.  I understand the boathouse was busy but not uncomfortably so.  The new design is clearly working out for visitors.  When you are outside, you don’t get the commentary that is provided inside during demonstrations so I was waiting and hoping to know when the launch would occur. 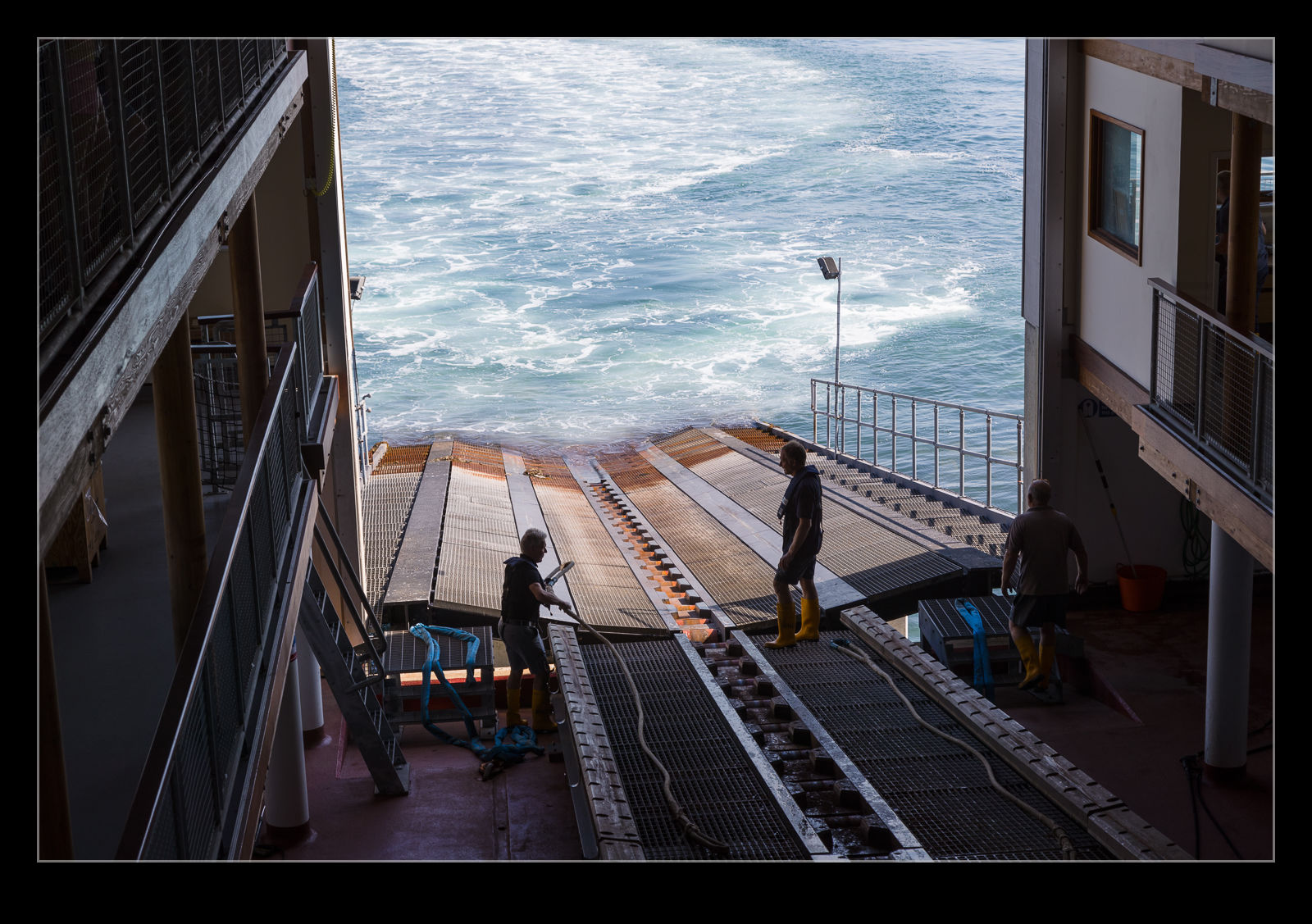 I could just see the front of the boat through the windows so I knew I would see when it tilted down.  Sure enough, when it started to drop, I knew to be ready (and also warned a few people around me too).  Then we heard the horn blast and out came the boat.  It moves swiftly down the ramp, but it isn’t so fast that you could miss it.  I was actually able to get some wide and tight shots as if slid down.  Then the entry to the water which is what I was really there for.  Again, the crew erected the mast and did a run past the boathouse.  They then headed off for some training and we met up to head to the pub for dinner.  The excitement they had both experienced I fully understood from the morning launch. 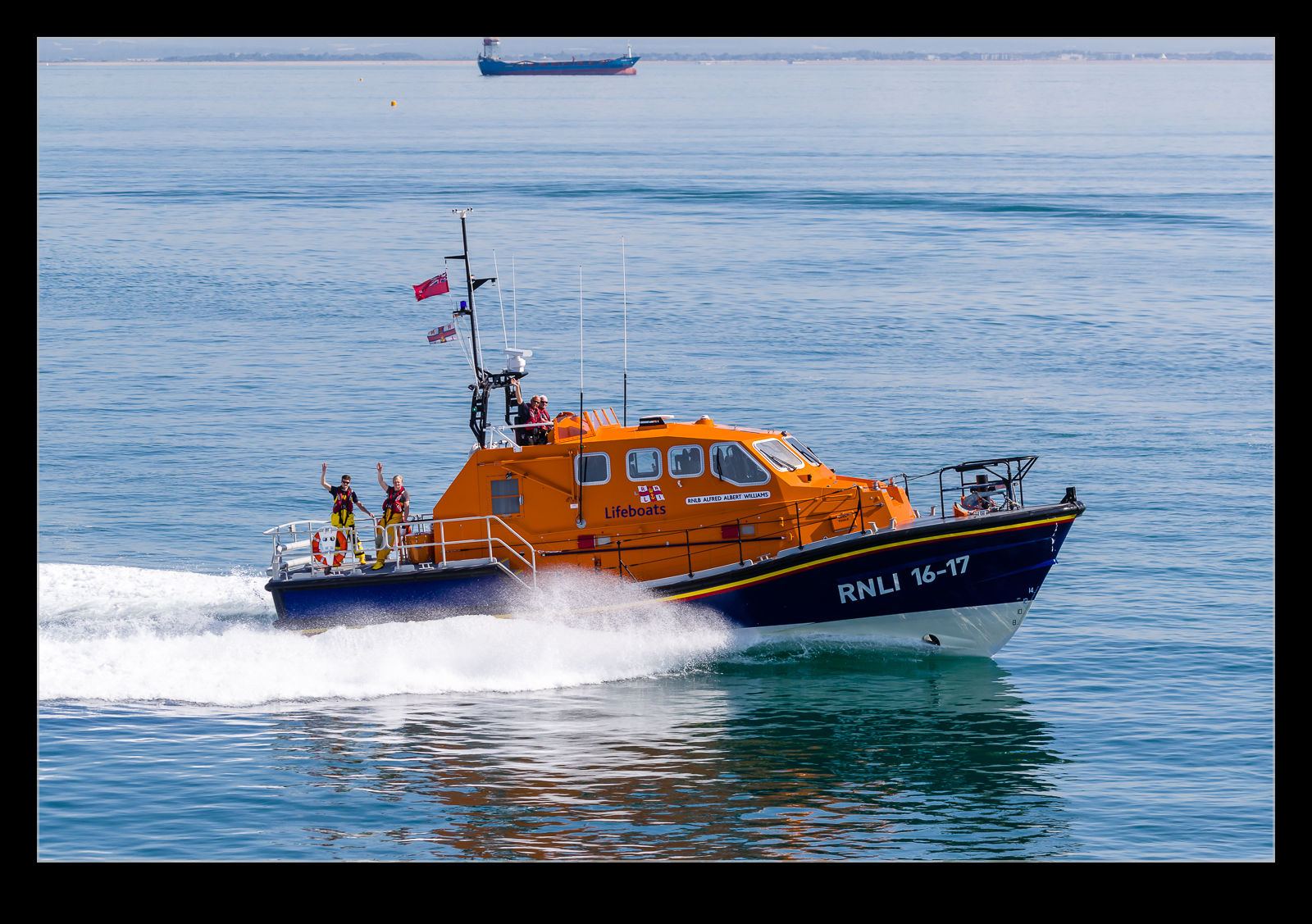 If you can, go and watch a launch.  It is something most impressive.  Also, make a donation if you can.  The boat is funded by donations and almost everyone involved is a volunteer.  We saw this all on a sunny, summer’s day.  So often, this is on a stormy winter’s night and they are heading into awful conditions – just because they want to do what is needed by someone they don’t know.  That is something special.