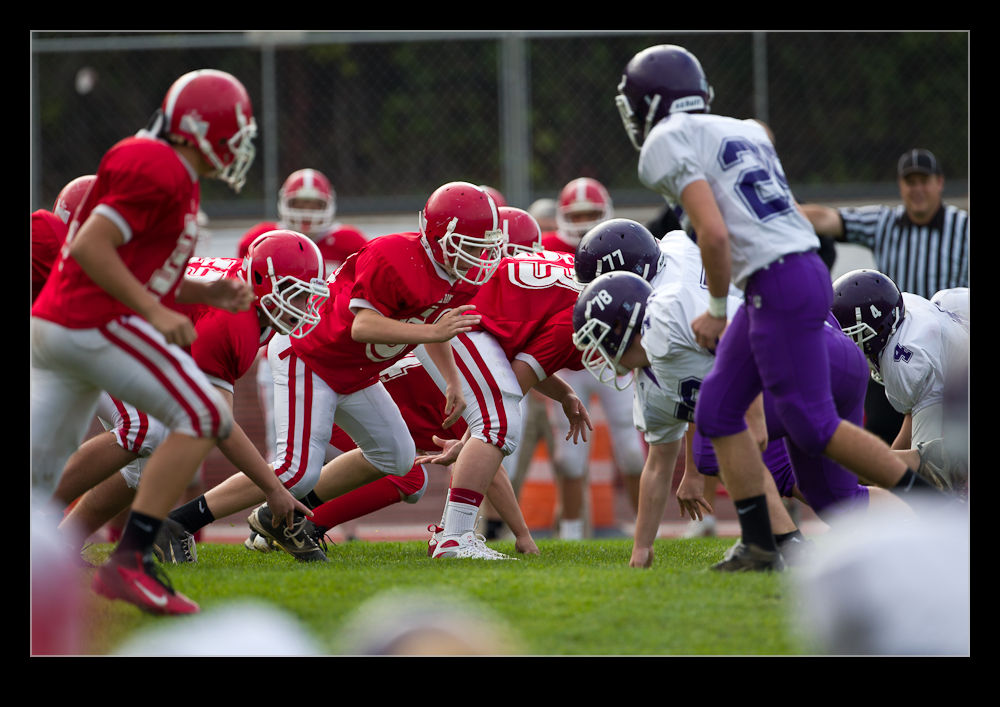 Devoted followers of this blog (that’s all of you, right?) will know I have had a couple of attempts at photographing football (the American version as opposed to the one that uses a foot to kick a ball). This involved preseason training camp for the Chicago Bears but not a real game. For my first attempt at a live, unplanned action, I did not have a professional game. It was time for High School. 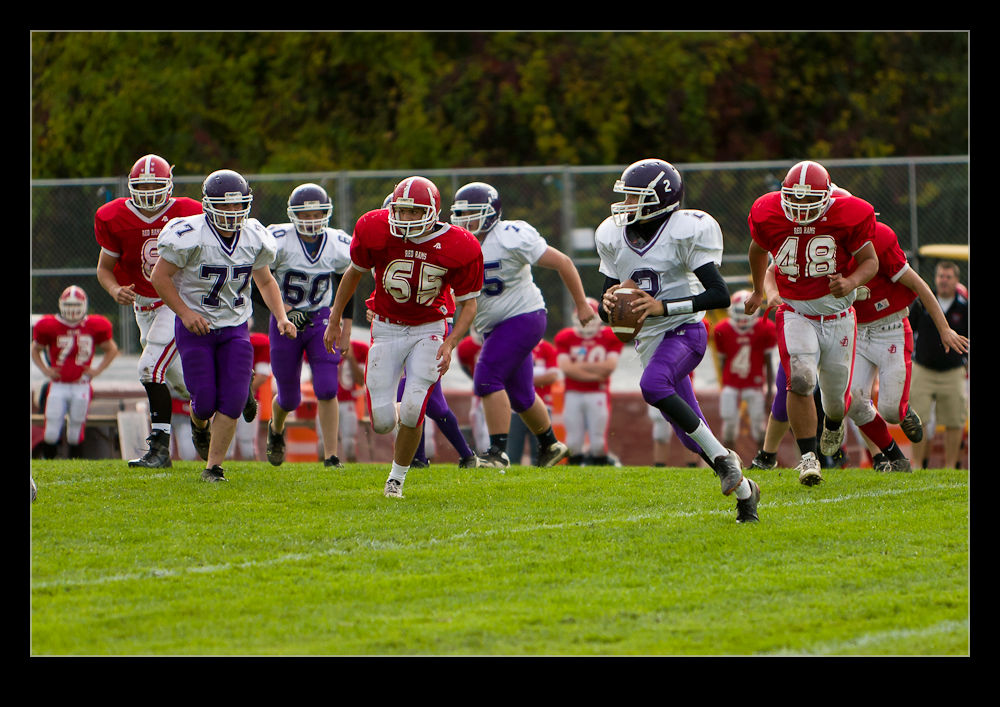 My nephew plays for his high school JV team and they had a game when we were going to be visiting so I took my camera along – like I wouldn’t have done so anyway!  I checked that there wouldn’t be a problem photographing at a school event and was reassured that it would be fine. 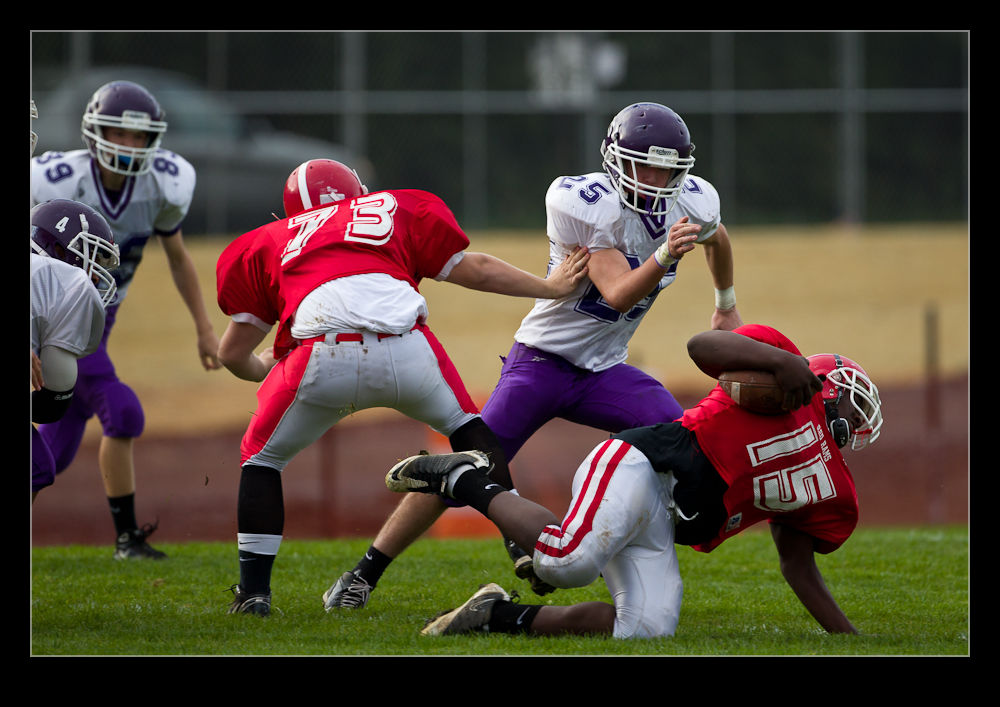 First something about the surroundings.  There was a fence around the field that no-one was to enter.  This limited me from some of the things I wanted to do but wasn’t too big a deal.  Second, this game was taking place in October in Syracuse NY.  This is not a combination that you select for good weather.  While I wasn’t bothered about the rain, the lack of light would be an issue. 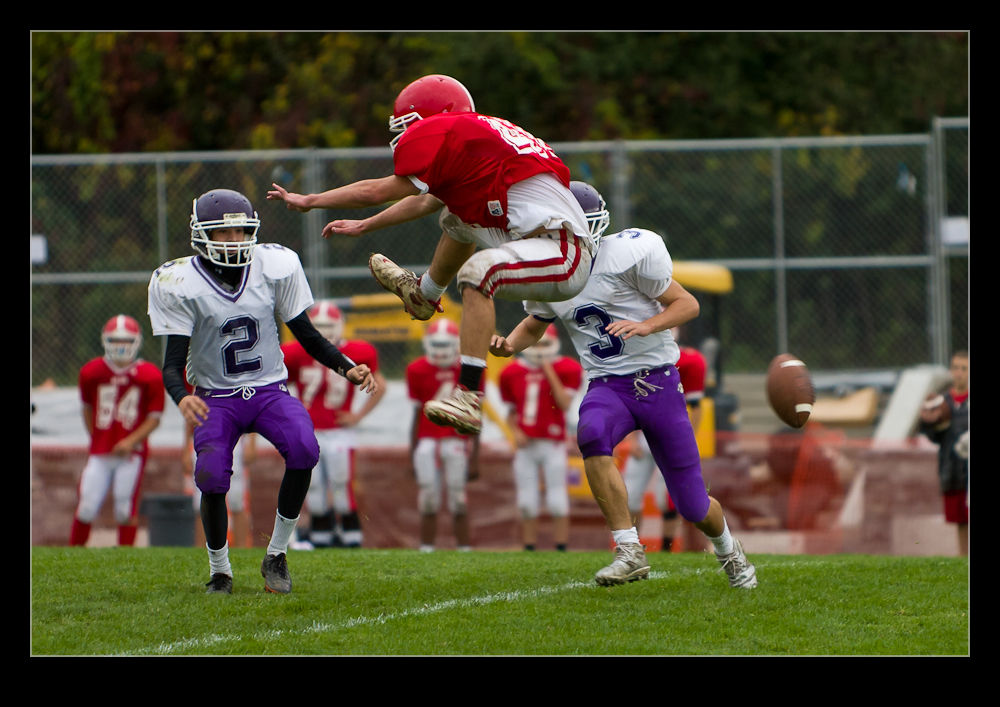 More of a problem initially was keeping track of what is going on.  When watching football on TV I have little trouble keeping track of how the plays are developing.  Doing it from the side of the field is a surprisingly different experience.  For a while, I could easily lose the ball completely.  A bit of practice and this improved considerably. 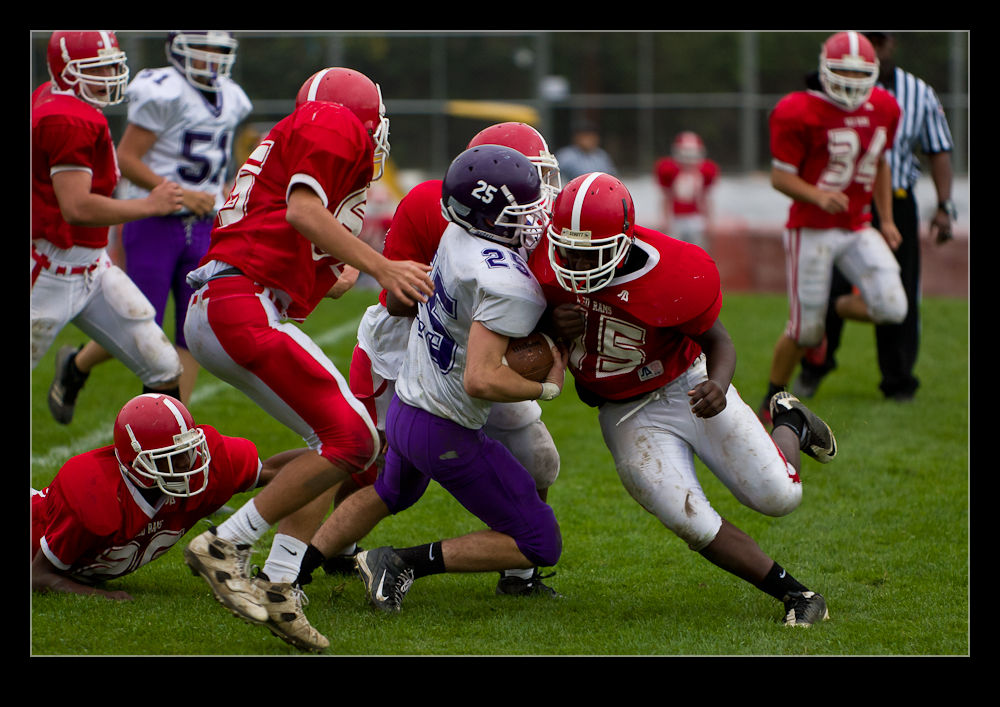 When the game started out, there was plenty of light and I could get the shutter speeds I was looking for.  As the game progressed, the light faded a lot.  I kept ramping up the ISO to compensate but it was still a struggle to get a high enough shutter speed.  Eventually the lights came on but they were only some compensation.  Even at the higher end of the ISO range I was happy to try, the shutter speeds were getting low.  Consequently, some of the later shots were as much luck as judgement! 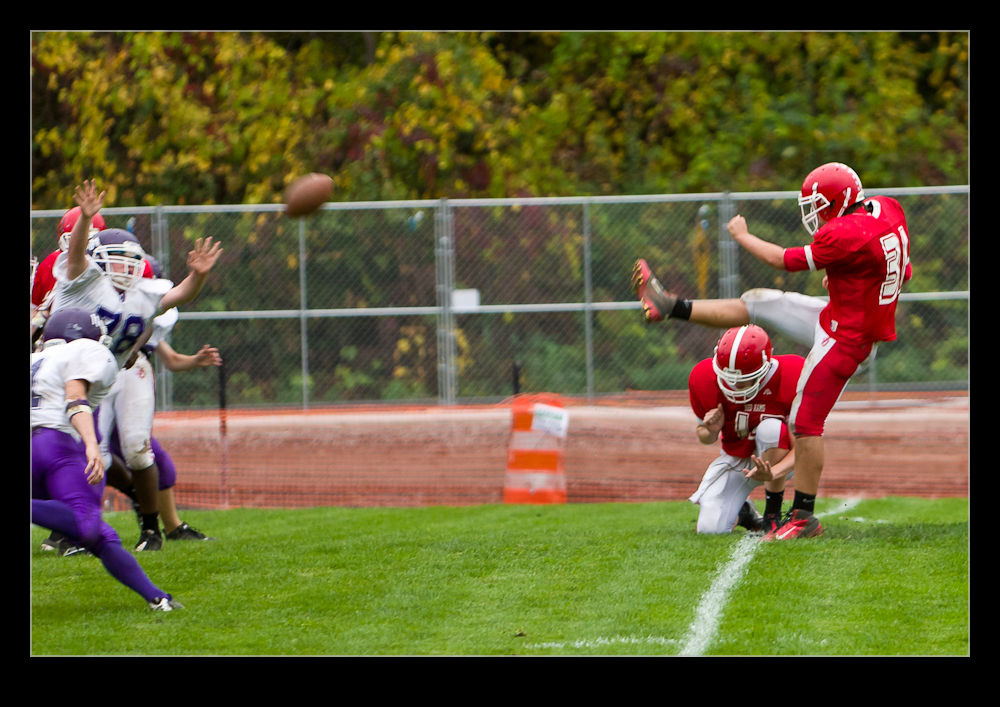 I shot a lot of images during the game.  You don’t get a chance to decide in advance whether a play will be any good.  Moreover, it is hard to see at a given time whether the key components of the shot are there.  I got plenty of shots with some dynamic movement from the players but no visible ball.  Without the ball, they really could be anything.  Off to the trash with them! 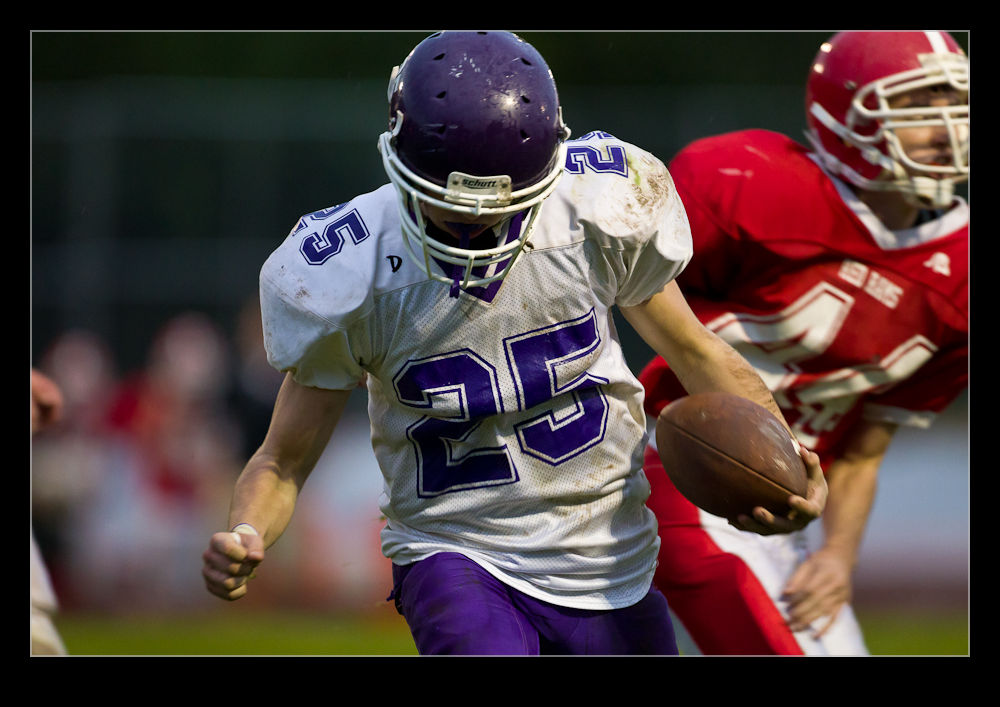 I wandered around the field to try different angles.  Starting at the side was fine and I could try some shots along the line of scrimmage.  I could also move up and down with the play as the teams advanced.  Later I tried shooting from both ends of the field.  That provided some quite satisfying angles but you also ran the risk of being at the wrong end when something happened or you saw the back of everything – again, no ball to be seen. 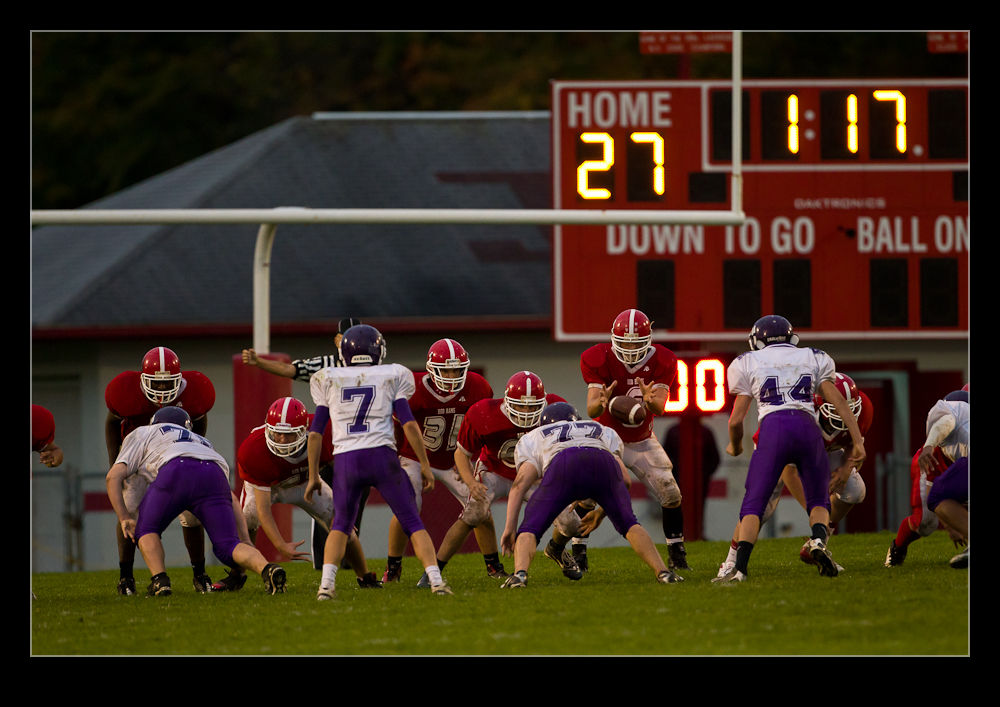 I was not alone on the sidelines.  Several parents of the players were also trying to get shots.  Between all of us, we probably managed to get a fair few that would be of use.  It was fun to talk to them as the game moved on to compare notes on what we were trying to get and what we had got so far. 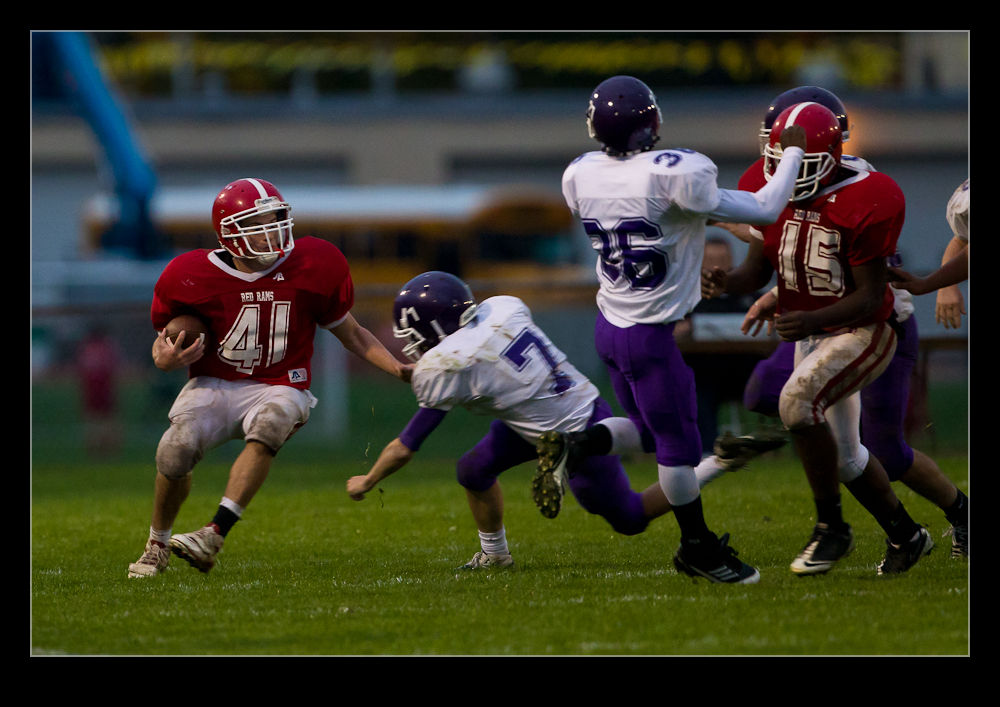 When I ran through the pictures afterwards, I wondered whether any of them would be useful to the team.  You can see some interesting things about the way players lined up and engaged with the other team.  You also get to record all of the penalties that the officials missed! 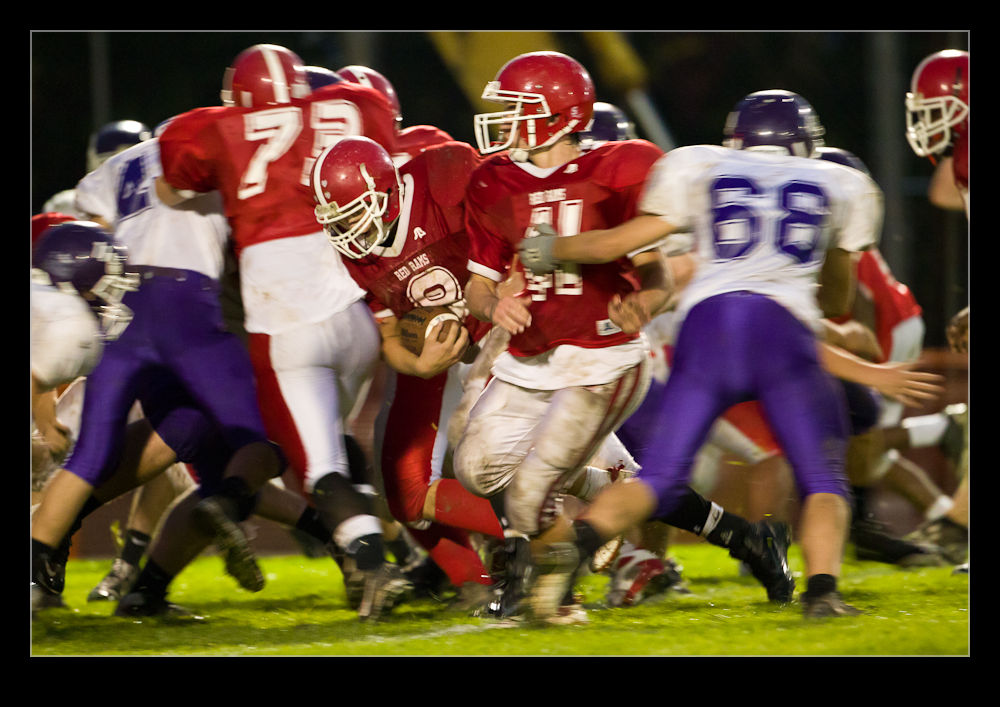 I had a great time (and stayed a lot warmer than the rest of the family since I was always on the move).  I would certainly like to try it again although next time it would be nice to have a bit more light to play with.  It was the penultimate game of the season for my nephew’s team I guess I won’t see them play again until next year.  Oh yes, they won so well done Jamesville Dewitt!