A couple of years ago I started thinking about the total solar eclipse.  We were living in California at the time and I had not long before been to an aviation shoot in Madras Oregon.  Madras was almost directly on the centerline of the path of totality so I thought about booking a hotel.  However, I didn’t do it then and time rolled on.  This year we moved to Washington so now Madras was a bit closer – just over five hours away if traffic is flowing freely.

As things got closer, it was time for a more thoughtful approach to what might be involved and this is where Nancy played the leading role.  She was not particularly interested in the eclipse but she knew I was.  Indeed, at one point in the run up she actually asked me if I would prefer to make the trip alone.  I can tell you that, having witnessed everything, she is really glad I didn’t want that!  Salem was the closest place with a good position for the totality.  Situated on I-5 south of Portland, that also meant a lot of other people were going to be going there so that was a non-starter.  Madras is further east which adds a bit to the drive but we focused on that.

We decided to stay in Portland the night before and set out early.  Plenty of people had been flooding in over the previous few days but, no doubt, others would be doing the same as us.  We also chose not to go to Madras itself but to go to Warm Springs just north of Madras.  This is a Native American reservation and they were welcoming people to the baseball fields to watch the eclipse.  The area is very dry so the chances of cloud obscuring things were a lot lower than closer to the coast.  To get there should take just under two hours from our hotel near Portland’s airport.  We decided to leave at 3am to give ourselves plenty of margin.

We did have a Plan B.  While there was a lot of time in the schedule for traffic, if it got really bad, we might just find ourselves on the highway when the eclipse happened.  As long as we got south of Mt Hood, we would be in the path of totality and, if you looked at the charts for timing, you didn’t have to get too far in to have a reasonably long period of totality.  We packed plenty of food and water and assumed, if it was totally congested, we would be with a huge bunch of people on the road and would enjoy it all together.

Getting up just after 2am, we checked the traffic reports online.  Everything was currently clear.  Good news but not necessarily to be relied on to last.  If we were leaving then, how many others were doing the same?  We put our stuff in the car and off we went.  The roads were pretty open and, as we got onto route 26, we were in a steady stream of cars but nothing that would slow you down.  We headed off into the wilderness.  This is a trip that takes you through some great scenery – if it is light.  Instead, we were out in the pitch black.  The stars around us were amazing to see since there was no light pollution if you weren’t looking ahead in the path of the headlights.

The traffic never materialized.  We got to Warm Springs in an hour and fifty minutes, arriving at the parking area fifteen minutes before it was due to open.  We met the nice people looking after things and they informed us we were the first to arrive and to park at the end of the row (which was hard to see in the pitch dark).  We parked up and had a few hours to kill so set the seats in the car up as a sofa and took it easy.  Nancy couldn’t sleep but I dozed off a few times.  Meanwhile, more cars arrived and people started milling around as it gradually got lighter.

Once the sun was up, we went off to look around the town and stretch our legs.  Then we set up our spot for the viewing.  I had brought two main cameras.  One was the longest lens combination I could get and the other had the 100-400 on it which I was planning to use for a time lapse.  I had bought solar filters for both a while back and B&H had shipped them with loads of viewing glasses.  We had shared some with friends already but we carried loads of spares in case anyone needed some.  No-one did though.  Everyone around us was well prepared so our spares stayed in the bag.  Meanwhile, I set the time lapse camera at an angle to see if I would track the path of the sun across the frame.  (I got this wrong as I did not have a steep enough angle.  I tweaked it a couple of times but it wasn’t ideal.  It worked but was a bit wonky!) 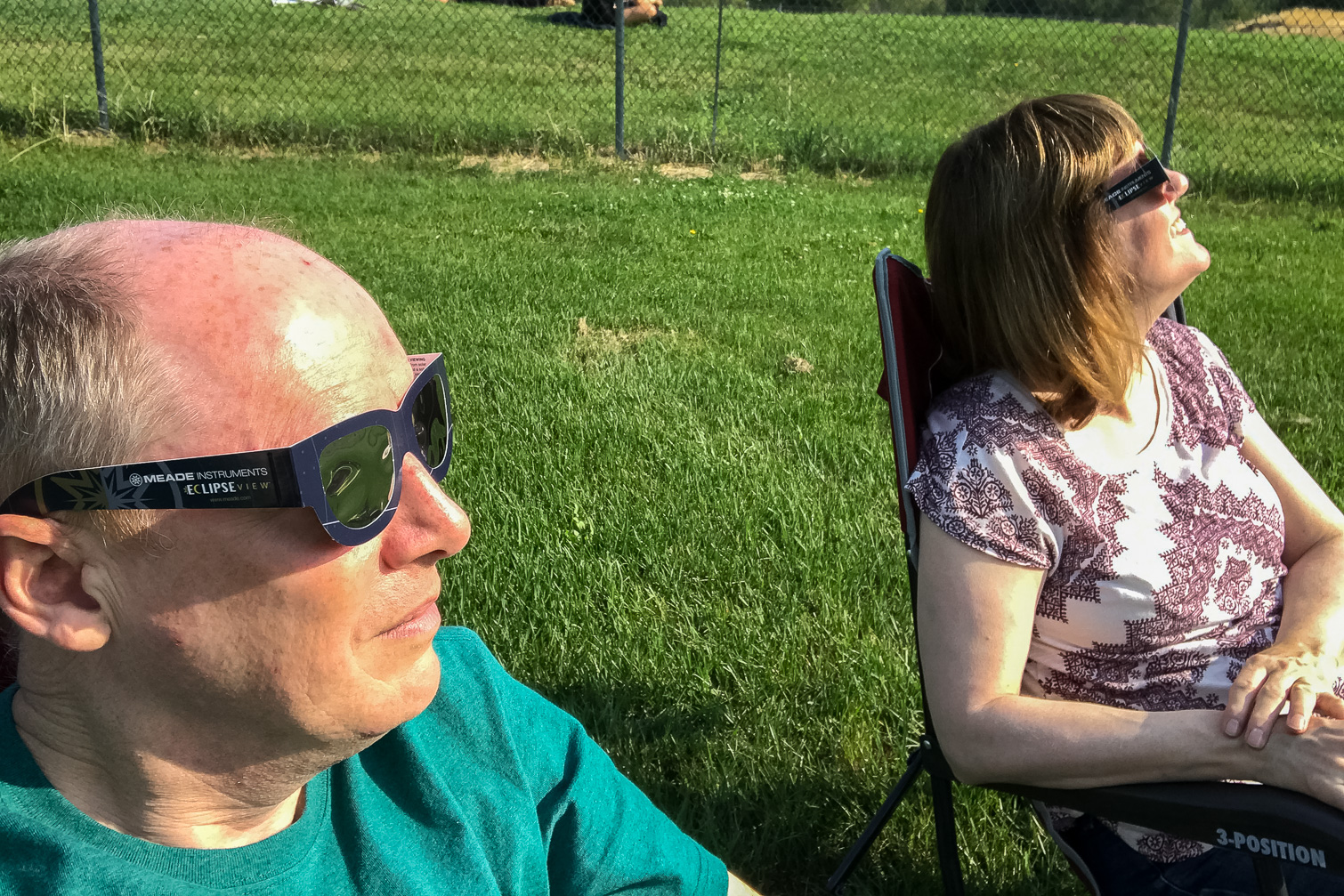 Lastly, I opened up the Solar Eclipse Tracker app on my phone which provided an audible guide to what was coming up and we got ready.  The skies were pretty clear initially with a hint of wildfire smoke in the distance.  As the time got closer, some high-level cloud did come in but nothing too significant.  Then it all started.  More to come…